Eyeing a spot in the quarterfinal at the Singapore Tennis Open, Yannick Hanfmann looked to cause an upset against Moldova’s Radu Albot, who is the 6th seed of the tournament. The 30-year-old needed to make use of his serve as a weapon because of his towering height at 193cm. Known for his terrific returns and quick feet, the 32-year-old Moldovan looked to use every inch of the court to constantly keep his opponent on the run.

Albot got off to a speedy start with a hold to love in the opening game and looked to be booming with confidence. Hanfmann then levelled the match at 1-1 with his huge serves. With the German coming for Albot, the latter found himself having to save two break points on his second service game, but managed to close the game in his favour with some strong approach shots. Hanfmann, who did a good job not harping over the break points he failed to convert, had a straightforward service hold and equalized the first set at 2-2. Trailing 2-3 down, the German was down a break point but quickly got himself out of that situation with an unreturned serve and made it 3-all in no time. With both players serving well and hitting fast-paced shots with heavy spin, the match was even at 4-4 and neither one of the players showed any signs of backing down.

At 4-5, Hanfmann was 0-40 down on his serve, after Albot played 3 brilliant points to set himself up with triple set points. The German did well to keep himself alive in the 1st set after answering with five terrific first serves which were all well placed and managed to hold serve to make it 5-5. With an easy hold from the 6th seed, he went up 6-5 and had another set point on Hanfmann’s serve, but failed to convert it for the fourth time, and it was the German who stayed tough to push the first set into a tiebreak. The momentum shift came at 2-1 in the tiebreak when Albot made a backhand volley unforced error into the net while trying to look fancy. The 6th seed evidently let down and lost focus after that point and saw himself lose six consecutive points to give Hanfmann the set. The German closed the first set at 7-6 (2) after Albot made another unforced error into the net.

Carrying on his rhythm, the German had a straightforward hold in the first game of the 2nd set and got an early break to take the lead at 2-0. Albot, who showed resilience, broke right back to trail 1-2 on serve and consolidated it with a hold to level the match at 2-2. The match went on to be rather even, until a chance for Hanfmann to close the match came by at 5-4 (40-15) when he had 2 match points on Albot’s serve. But the 6th seed came up with a superb response with an ace and a passing shot before he went on to hold serve. The Moldovan quickly turned the match around and broke his opponent to find himself a break in front and a chance to serve out the second set.

Hanfmann broke back in a flash after Albot failed to serve out the set when he hit the net cord, which did not go in his favour, on break point down. The second tiebreak of the match saw the German going 3-0 up after dictating the points and finishing at the net. Not going down without a fight, Albot defined his own risks and hung in the long rallies to make it 5-5 before going on to have a set point at 6-5 in the tiebreak. The German, who then got lucky, saved a set point with an unforced error from his opponent on his second serve. Albot saved the 3rd match point with a big first serve. With two unforced errors and a forced error from the German, the 6th seed took the second set at 7-6 (7). The Moldovan showed brilliant resilience to bounce back and bring the match into a deciding set.

Coming back from his toilet break, Hanfmann broke Albot straight away to go up 1-0 in the final set. The German backed up the early break with a quick service hold. Albot then redeemed himself with a better service game to trail 1-2 after a poor start in the 3rd set. Right after that, the 6th seed broke the big serving German, who looked to be running out of gas, to level the match at 3-3 and held again to be ahead for the first time in the deciding set. Albot earned another break by playing quality points with controlled shots and gave himself a chance to serve out the match at 5-3. It took 5 match points before the Moldovan wrapped up the match 6-3.

In 2 hours and 42 minutes, we saw spectacular tennis which included all aspects of the game in a topsy-turvy match. Hanfmann had a great game plan, which was to throw in many dropshots and finish the point at the net, but it was too good from Albot to have anticipated well and to have adjusted his own game plan accordingly. The Moldovan showed his experience by playing smart with a subtle change of tactics. Final score once again was 6-7, 7-6, 6-3

The 6th seed will take on either top seed Adrian Mannarino or Roberto Macora for a spot in the semi-final. 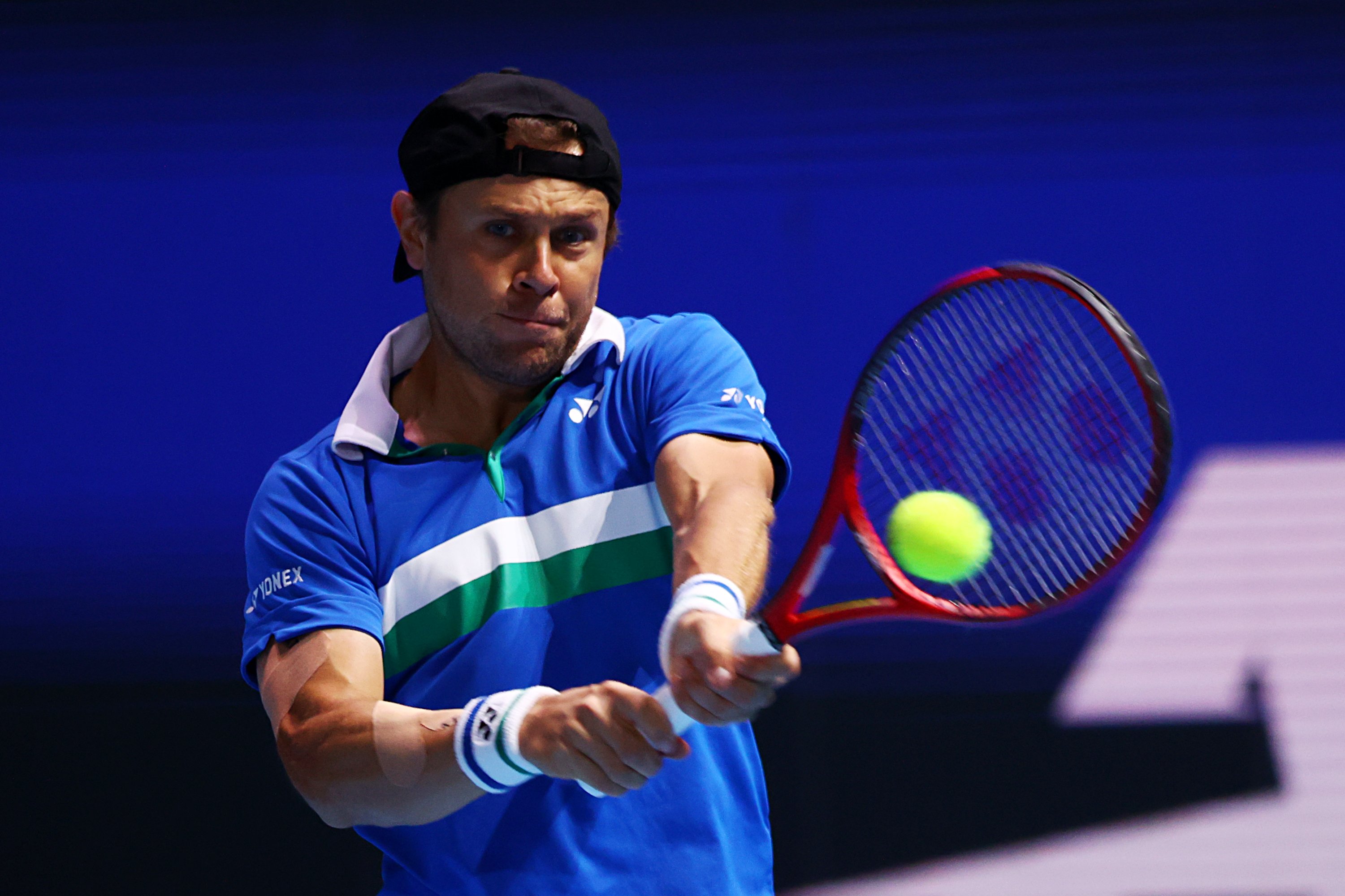