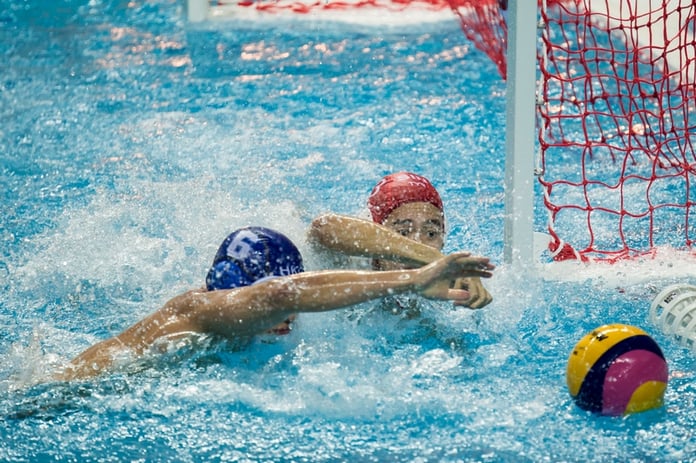 In this article, rules of the game are explained, and basic game play will be explored.

The rules are simple: each match is divided into four periods lasting eight minutes, and only seven members of each team are allowed in the pool at any one time. Teams can have up to six substitutes for each match.

Each team’s ultimate aim is to score by getting the ball through the goal, but players can only touch the ball with one hand. The only exception to this is the goalkeepers, who can grab it with both hands.

Additionally, the goalkeepers are the only ones permitted to stand on the bottom of the pool, whereas other players are required to keep afloat throughout the entire game.

Strict rules govern how players should behave. For instance, players are not allowed to push or hold an opponent unless the opponent has the ball, and players can move the ball across the pool by swimming with it or throwing it to a teammate.

A foul is committed when a player displays aggression to an opponent. Minor fouls includes restricting the movement of an opponent who is not in possession of the ball, dunking the ball under water, or a player who doesn’t have the ball standing within two-meters from the goal. Minor fouls result in a free pass for the opposing team.

An ejection, however, is a foul on a higher level. Players are removed from the game for 20 seconds if they kick or dunk an opponent under water. Each player can only have three ejections before they are removed completely from the game.

Much like soccer, players score by putting the ball into the goal. Players have to constantly swim and tread water throughout the duration of the game, keeping their heads above water in order to watch the game progress.

Typically a player can fill more than one position, compared with other sports where players stick to one role.