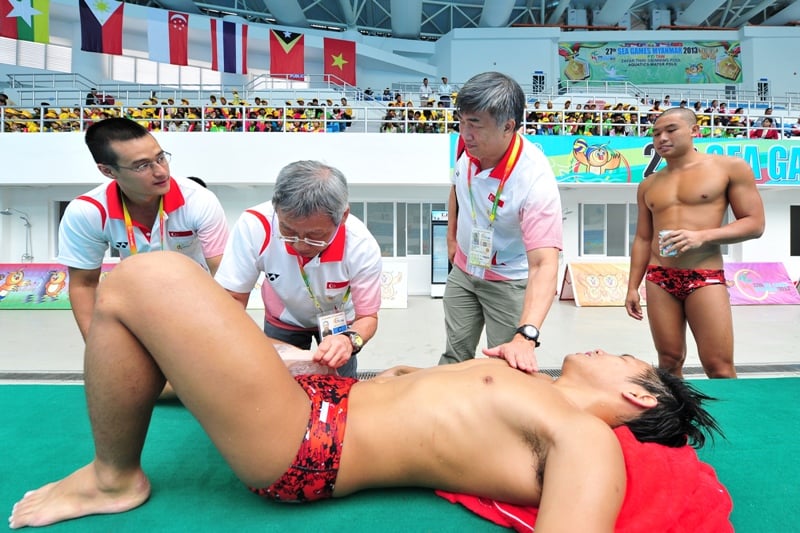 Injuries are quite common during a game of water polo. It is especially hard for referees to spot what happens below the surface of the water due to the high level of activity and movement in the pool.

This article will look at some tactics that you can use in order to prevent yourself from getting injured by over-enthusiastic opponents.

As all players, except the goalkeepers, are expected to stay afloat throughout the game, players are either swimming or treading water. Treading water is often called the ‘egg beater’ due to its similarities to the motion of an eggbeater. Players can often and easily disguise kicks to their opponents as an act of treading water.

As referees are unable to see what happens under water, the only way to prevent kicking is to try and keep a distance away from the opposing defender guarding you.

Even with the limited amount of cloth in swimming attire , many players commonly grab an opponent’s swimming suit in order to restrict their movement or prevent them from receiving the ball. Players can get “accidentally” clawed and scratched by opponents in the process as well .

One of the most serious fouls that a player can commit during a game of water polo is called brutality, and it involves acts such as intentionally punching another player. Players who are caught intentionally throwing punches are removed from the game completely, but it doesn’t stop them from doing so. In fact, players disguise their punches or attempt to do it under water, where referees don’t have a clear view of what is happening. Punches have led to  many injuries, including broken and fractured nose, damaged eardrums, fingers and jaws, among others.

One way that players disguise their punches is by clenching their fists while swimming backwards, and “accidentally” making contact with an opponent, thereby punching him. To prevent this, make sure to stay alert at all times and move an arm’s width away from the incoming opponent whenever possible.