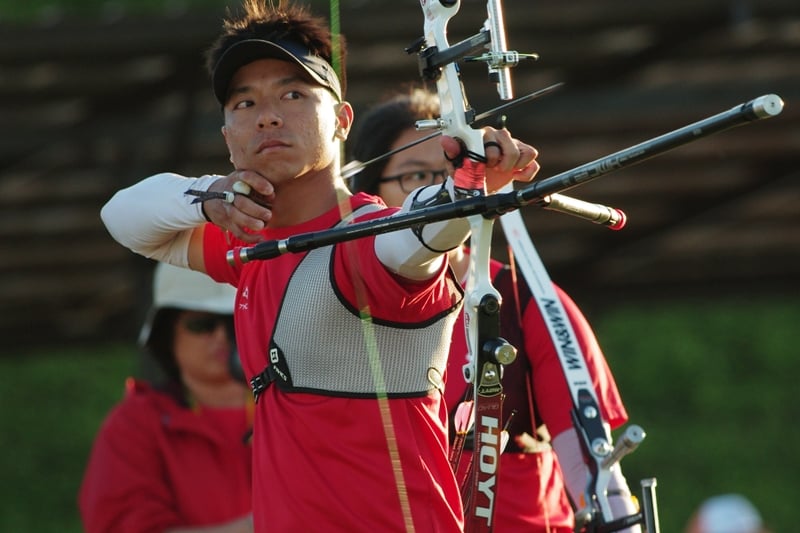 Katniss Everdeen from Suzanne Collins’ The Hunger Games certainly makes archery look straightforward and effortless. Bow? Check. Arrow? Check. If you think that archery merely involves aiming, pulling, and shooting with a bow and arrow, then you have stumbled upon a whole trove of new information here. To specialise in modern archery, you’ll definitely need far more than just the quintessential bow and arrow.

Arrow
It may seem tiny, bearing a maximum diameter of just 9.3 millimetres (as per Olympics standards), but the arrow should not be underestimated. The modern arrow is commonly made using carbon fibre, fibreglass, wood, or aluminum.

Bow
Comprising two limbs joined in the centre by a riser, a bow is designed to project arrows using the energy exerted from pulling back the bowstring. A hand grip is found on the riser, which is the middle portion of the bow. It also contains the arrow rest, where the arrow is positioned.

Apart from the various types of equipment, each dedicated to increasing the power, precision, and safety of an archer’s shot, the bows themselves have different classifications to suit varying needs and competition requirements. Among them are the two most common kinds used today - recurve bows and compound bows.

Recurve Bows
The only type of bow used for the Olympics, recurve bows have tips that curve outwards, away from the archer. Designed to add more power, the curves of a recurve bow move and straighten towards the archer when pulled, before returning to its original state upon completion of the shot.

Compound Bows
In addition to the standard recurve bow events, previous editions of the SEA Games as well as the 2014 Asian Games in Incheon have seen the inclusion of compound bow events. Utilising rotating pulleys fixed to the end of each limb, compound bows are designed to increase energy-efficiency.

Bowstring
The string connecting both ends of a bow’s limbs, modern bowstrings are typically made using sturdy polyethylene fibres.

Release Aid
True to its name, the release aid helps an archer to shoot with greater accuracy. It is a small device that archers use, instead of their bare fingers, to pull back and release the bowstring.

Stabiliser
A weight, usually placed on a rod, acts as a stabiliser when mounted on a bow. This aids in the minimising of movement when and after releasing the arrow, improving the chances of a perfectly straight shot.

Bracer
A type of leather or plastic guard worn on the forearm, the bracer protects against injuries that may be caused by the bowstring and/or the arrow. It also helps to prevent the archer’s sleeve from getting caught in the bowstring.

Finger Tab
Also known as an archer tab, this handy little leather device protects the archer’s fingers when the arrow is released.