What are field events in athletics? 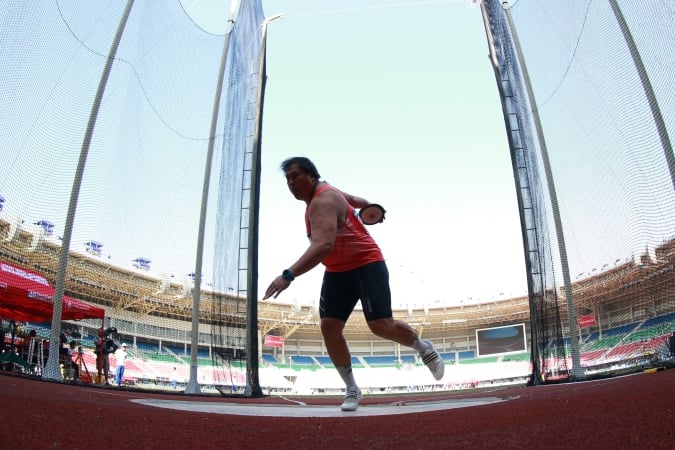 Track and field events have a long and rich tradition and are some of the oldest athletic contests in recorded human history. In 776 BC, at the first Olympic Games in Ancient Greece, there was only one sport – wrestling. Gradually, the Games expanded to include the javelin throw, the long jump and others. By 200 BC, these athletic contests were so popular, there were 4 separate festivals, with participants from neighbouring countries and cities, like Rome (The Panhellenic Games).

In this second part, we will examine field events, which take place on a large field, as opposed to the running track. They can be classified as jumping and throwing categories.

In the shot put, you throw a heavy spherical object called the shot (it resembles a cannonball). The weight of the shot is 7.26kg for men and 4kg for women. The shot put for men has been part of the modern Olympic since 1896 and the competition for women began in 1948. First, rest the shot close to the neck, and keep it there throughout the motion. Next, release above the height of the shoulder, using only one hand, as far as possible. The shot has to land in the designated zone of the throwing area. The one that lands the furthest, wins.

The hammer throw involves a heavy ball attached to a strong wire. The ball is swung twice in the same spot, legs stationary. Next, you make three or four rotations with your body in a circular motion, with your feet engaged in a heel-toe movement. Then, you release the ball into the designated zone. Whoever can throw the hammer the furthest, wins the event.

The discus is a heavy disc (like a frisbee) and weighs about 2 kg. You start in a circle 2.5 m in diameter, then spin in a counter-clockwise motion around one and a half times to build momentum, before you release it. Whoever throws it the furthest, will win. There are no form rules about how the discus is to be thrown.

The javelin is a spear about 2.5 m in length. You need to run within a predetermined area to build up speed and throw it as far as possible. Javelin throw is also an event part of the men’s decathlon and the women’s heptathlon.

This contest is unique for two reasons. First, the technique is determined by the IAAF (the International Association of Athletics Federations). The javelin must be held by the grip and thrown overhand, over your shoulder or upper arm.

Also, you cannot release the javelin and turn, so that your back faces the direction of the throw. The runway must be a standard size, 4m wide and 30m long. It must end in a curved arc, from which the throw will be measured.

Lastly, the javelin tip must strike the ground before any other part, in the designated zone. Only then is the throw considered valid.

In this event, you run down a strip (the same sort of rubberized surface as running tracks), and jump as far as possible from a wooden board 20 cm wide. The board is built flush with the runway, and you leap into a pit filled with finely ground gravel or sand. If you start the leap with any part of the foot past the foul line, the jump is disqualified.

There are usually five main components to the long jump. Firstly, the approach, the last two strides, takeoff, action in the air and finally the landing.

In a nutshell, speed is critical in the approach run, a higher leap off the board will result in a further jump.

Similar to the long jump, you have to run down the track and perform a hop, a bound and then a jump into the sand pit. According to the IAAF rulebook, "the hop shall be made so that an athlete lands first on the same foot as that from which he has taken off; in the step, he shall land on the other foot, from which, subsequently, the jump is performed."

Pole Vault has been a medal event at the Olympic Games since 1896 for men and 2000 for women.

In the pole vault, you sprint down a track, plant one end of the pole in the metal box, and catapult yourself over a 4.5m horizontal bar (without knocking it to the ground), release the pole, and fall onto the landing mattress. The pole can be of any length, diameter and made of any material, but the basic rules and technique state that you must not move your hands along the pole when it is upright; you must clear the bar feet first, and twist so that your stomach faces the bar, as you descend.

Here are some terminologies used in pole vault.

Pit - The mats used for landing in pole vault.

Pole - Usually made of fibreglass and stiffer on one side to allow the pole to bend after planting it to the ground.

To do the high jump, you do a short run-up, leap from one foot over a horizontal bar, and fall onto a cushioned landing area. What is interesting was how jumping technique evolved in this event.

Previously, different high jumpers used different methods, but at the 1968 Mexico City Olympic Games, an athlete called Dick Fosbury pioneered the backwards and head-first jump, and captured the gold. This technique is the standard for all high jumpers today and dubbed the Fosbury Flop in his honour.

Are you a youth interested in athletics? Or perhaps a parent with young children with a capacity and talent for running? Join us at the ActiveSG Athletics Club today by registering here.

It is the ideal platform to fulfil athletic potential through courses, clinics and championships. Beyond inculcating sporting values, the training also focuses on developing character and inculcate life values such as integrity, perseverance and teamwork. Training not just to be a better athlete, but a better individual.

So whether at an entry level or embarking on a pathway to excel in it, the ActiveSG Athletics Club is your first choice!