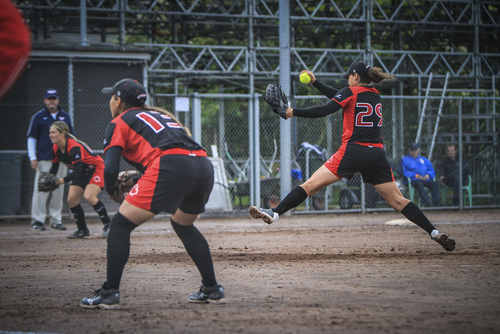 A game of softball involves team members taking turns as batters to play against the other team of fielders, with the latter side made up of a pitcher, a catcher, three basemen, a shortstop, and three outfielders.

A team sends one batter out to the field at a time. The batter competes against the entire opposing team, which will strategise in a bid to prevent the batter from getting to the bases before the ball does. The game begins with the batter hitting the ball, thrown by the pitcher, with a bat. He or she will then drop the bat and run, attempting to make it to first base before the ball, depending on where the ball lands.

The pitcher throws, or pitches, the ball from the pitcher’s mound. He or she must always stand with both feet on the pitcher’s rubber - a rectangular area on the mound - when making the pitch. The rubber and the mound are all on level ground. However, once the ball has been hit, the pitcher must ensure that neither foot is on the rubber. The pitcher usually pitches from under the arm and the ball should pass through a strike zone. The location of the strike zone, an imaginary area from the chest to just below the knee, depends on the pitcher’s position and stature. Height is an advantage for pitchers, as well as upper body agility and strength.

Positioned in a crouch behind the home plate, the catcher plays a crucial role in helping to gain points. Helping to throw balls ahead of the batter before he or she can reach the bases, the catcher also catches balls fielded from third base. A catcher must also call pitches and communicate the number of outs, strikes, and whatever is going on at the home base to the rest of the players.

The first baseman of each team will stand at the first base, to the right of the pitcher. He or she will catch throws at first base in order to prevent the other team from scoring.

The shortstop stands between the second and third bases, and is responsible for balls that end up in that area. In fact, most balls actually do end up there. The shortstop has many responsibilities, including catching and fielding, and are very versatile and agile players. This is perhaps the most difficult position on the field.

The remaining base is reserved for the third baseman. This area is the corner diagonally opposite the first base. The third baseman has to catch the hits that land around his or her area, in addition to their most important responsibility - to throw the ball, if they get it, to the catcher before the opponent reaches the home plate.

There are three outfielders, and their positions are called right fielder, centre fielder, and left fielder. The outfielders are positioned outside the area marked by the four bases (infield square), with the right one standing closest to first base. Their job is to catch and throw balls that fly out of the infield, backing up their teammates at the bases. Because of their distance from the rest of the game, outfielders are usually strong throwers.