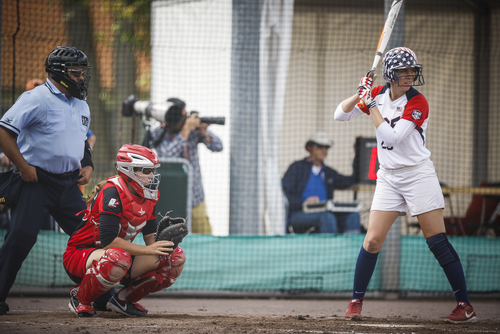 Peppered with technical jargon and perplexing signals, softball is a game that may be rather difficult to understand. This guide details the different umpire signals and what players can expect when they are displayed.

Signal: A clenched left fist, stretched out at the side.
What it means: A live ball refers to a ball that is in play. When the defensive side commits an error, the ball should be called dead. However, if the offensive team is already running and has a chance to score, the ball’s so-called death may be delayed.

Signal: Right arm is put up, displaying two fingers, along with the call, “two bases”.
What it means: The batter has hit a fair ball that eventually bounces out of play, but manages to run past first base and reach second base before that happens.

Signal: Using the hand that is in closer proximity to the infield, the umpire will point to the ball. He or she will also point towards the infield space with the other hand.
What it means: If it is not clear whether or not a ball has landed on fair territory, the umpire will have to wait till it ceases all movement before declaring judgment. If the ball is considered fair, this signal will be presented.

Signal: The dead ball signal - two palms raised and facing outwards at either side of the body - will be shown, along with a call of “foul ball”.
What it means: When an action on the field is deemed illegal, the ball will be called dead.

Signal: Bringing the fingers from both hands down to meet in front of the chest, the umpire will follow the foul tip signal with a strike signal - by putting his or her right hand to face the ear, then folding it back down at the elbow with a clenched fist. No verbal notification will be given.
What it means: When the batter bats a ball straight into the catcher’s hands, a foul tip occurs. This is counted as a strike, and the ball remains in play.

Signal: The umpire will raise the hand that is nearer to the pitcher with his or her palm facing out like a stop signal.
What it means: This signal notifies the pitcher not to start the game yet because the batter is still not ready to bat.

Signal: Right fist rotating in a counter-clockwise motion while raised. The umpire will also declare “home run”.
What it means: The batter has hit the ball far enough to allow him to run back to home base, having run through the first, second, and third bases as well.

Signal: Right fist displayed, along with the call “infield fly”.
What it means: If the umpire decides, while the ball is in mid-flight, that the defensive team will definitely be able to catch it easily, they will call the batter out under the infield fly rule.

Signal: A wave to the pitcher, using the hand that is closer to him or her. “Play ball” will also be announced.
What it means: This is the signal for the pitcher to throw the ball and start the game.

Signal: Beginning with both hands in front of the chest, the umpire will raise his or her right hand to face the ear. Following that, he or she will form a clenched fist and put it back down, resuming the original position by bending at the elbow.
What it means: A strike happens when the batter misses a pitch. Three strikes becomes one “out”.

Signal: Arms spread out at the sides, forming a horizontal line, palms down. The umpire’s decision, whether “trapped ball” or “safe”, will also be announced.
What it means: Trapping occurs when a ball hasn’t been caught properly, hitting the ground before the player catching it can scoop it up. It is up to the umpire to make the final decision whether or not the ball is safe or trapped.