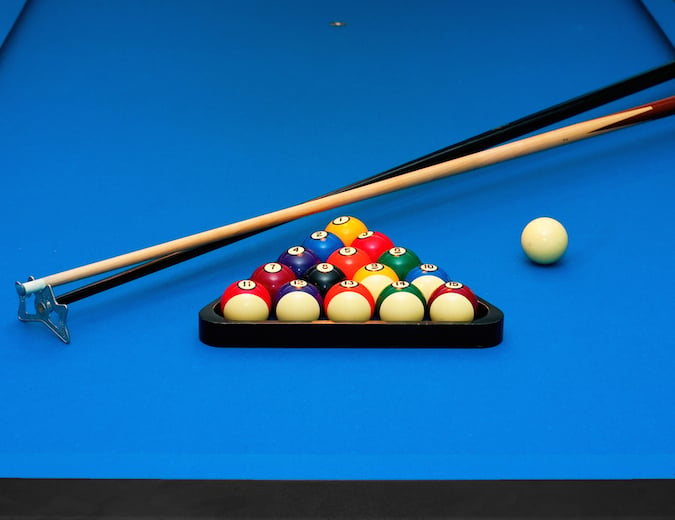 When it comes to cuesports like pool, snooker or billiards, here’s the basic equipment you’ll need to get started.

Balls
The colours and size of the balls used in cuesports differ between pool, billiards and snooker. In pool, the size of the ball is roughly 2.5 inches in diameter and there are two types of object balls besides the traditional white cue ball. The two sets include seven solid coloured numbered balls and seven striped numbered balls, as well as a black eight-ball with the number eight in white. The colours range from yellow, orange, brown, purple, green, red and blue.

Billiards only require the use of three balls – two cue balls, with one being the traditional white one and one being either yellow or white with a black or red dot, as well as a red object ball.

Rack
A triangle rack is used in both snooker and pool, in order for the balls to be kept in the proper triangle formation before the game starts. However, in the case of pool, there are two kinds of racks – the triangle rack for eight-ball pool and the diamond-shaped rack for the nine-ball pool. The rack is removed before the start of the game.

Cue
There is no real fixed measurements for the cue sticks used in all three different cuesports, but the average length measures around 58 inches and tapers down to a ferrule (tip) of around 0.5 inch in diameter. In the case of snooker, the ferrule of the cue is normally smaller in comparison.

Chalk
Not a compulsory equipment to have, most cuesports players nonetheless use chalk during the game. Chalk is used on the ferrule of the cue, and normally before every shot that the player takes. This is so that the friction between the cue and the ball is increased, and hence improving the efficiency of the hit.

Bridge
A mechanical bridge, or rake, is sometimes used to support the cue when a player takes a shot, or to aid the player in a shot where the ball is too far away for the hand to act as a bridge. As with the chalk, this piece of equipment is optional.