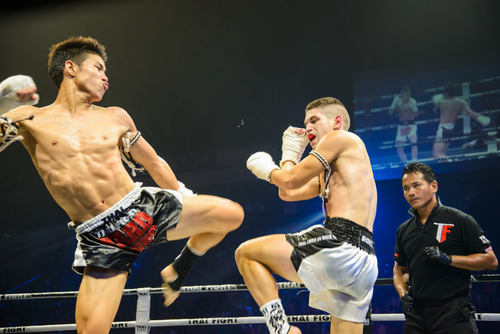 Boxing is one of the most widely known types of combat sports, but it shares key components with some others.

It is also considered more dangerous than amateur boxing, as blows are typically more forceful and headgear is not worn during the rounds. Additionally, it is a requirement for male boxers in professional boxing to be bare chested. The scoring systems for both sports are similar, with both using the 10 point scoring system. However, in professional boxing, a boxer can win via a technical knockout if he manages to leave a cut on the opponent and the latter  is deemed unfit to continue by doctor.

Muay Thai is a full contact sport that originated from Thailand. Compared to both amateur and professional boxing, it is a sport that involves more physical contact and exertion as blows are not limited to punches. Boxers in Muay Thai are allowed to use their fists, elbows, knees and shins to attack their opponent.

Fighters are also classified according to their weight classes in muay thai and they compete in five-round bouts lasting three minutes each, with two minute intervals between rounds. Protective padding such as headgear is required, and depending on  the organising body, other forms of protective gear might be mandatory.

Although fighters are allowed a huge reign over the moves they employ to attack the opponent, biting and headbutting is forbidden. Additionally, he is not allowed to lock the head or arms of the opponent, nor wrestle or use abusive language against the opponent or referee. The player will also be penalised if he makes an intentional strike at the opponent’s groin area.  A fighter wins by managing to land more strikes on the opponent’s body, displaying more powerful blows, causing more damage to the opponent than the opponent to him and committing less fouls.