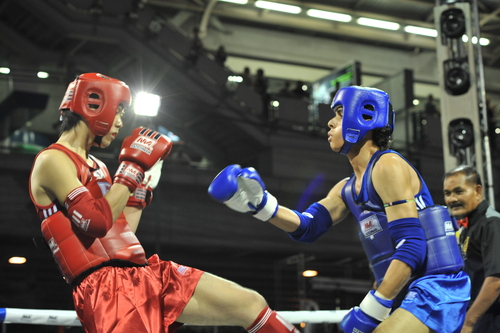 As with all combat sports, defending is a key aspect of boxing. Here are some of the different ways and moves you can use to defend yourself properly in a bout.

Slipping refers to simply turning away from the incoming punch, and the punch slips past the boxer’s face. This is done by rotating the hips and shoulders, so that the face moves sideways and is out of the path of the punch. This is often used to defend against jabs.

Also known as the fade, this defence happens when a boxer anticipates a punch and moves his head backwards in order to avoid it. Even if the punch is impossible to avoid, the sway is also a good way of lessening the impact of the opponent’s blow.

The boxer simply bends his knees, while keeping his back straight, so that he moves vertically downwards and the blow misses the head or just merely grazes it. This is one of the most effective defenses in boxing.

The bob and weave is a very popular defense method, as it helps the boxer avoid the punch while allowing him to emerge on the opponent’s other side. The boxer has to move his head downwards and sideways away from the opponent’s punch, bending his knees quickly and turning the body either to the left of the right. He then ‘weaves’ into a standing position, so that he is either on the inside or outside of the opponent’s punching arm.

Parrying involves the boxer’s shoulders, hands and arms blocking or deflecting incoming blows from the opponent. Parrying usually involves deflecting the punch, whereas blocking refers to the boxer receiving the blow using either his shoulder, hands or arms.

The cover up is, as its name suggests, is a move where the boxer uses his fists and gloves to cover his face, so that he can avoid the punch or blunt the impact of the blow. It is usually a last ditch effort by the boxer to avoid a punch and it leaves him open to attacks from below. The elbows should be pulled in in front of the body, with forearms held parallel to the body and facing outside.

Clinching is a mild form of grappling, and involves the boxer holding his opponent’s arm to prevent the opponent from throwing any punches. The boxer has to come into close proximity with the opponent and loop his arm, so that it goes under the forearm of the opponent, thus pinning down the opponent’s arms. Clinching is technically illegal as holding is not allowed in boxing, but it can be used for quick defense before the referee breaks the clinch.