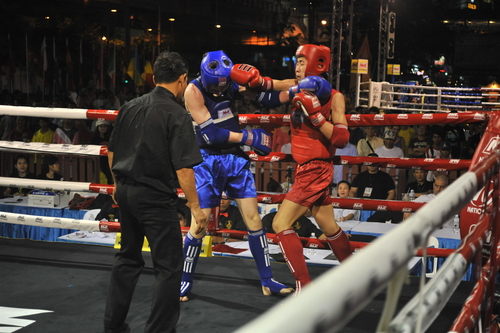 Here are some of the basic rules, known as the Marquess of Queensberry rules, that govern an amateur boxing match and the format featured in major international sporting events.


While rules can differ from match to match according to the organising bodies, there are some general rules that apply in almost all events.

A match is usually made up of a pre-determined number of rounds, lasting three-minutes each, with a one minute of break between each round. This break is frequently used by the boxers to seek advice from their coaches or to tend to their injuries in their assigned corner of the ring. Players have to enter the ring from their assigned corner, and retreat to that corner during breaks.

If a player is knocked to the ground by the opponent’s blow or if any  part of his body besides the feet is touching the ground, the referee will start a countdown from 10. The player has until the count reaches zero to stand and resume the match, or else he will be ruled as ‘knocked out’ (KO) and the opponent is victorious. Even if the player regains his position but for his own safety is deemed unable to continue in the match, a technical knock out is ruled, which will result in the opponent being named the winner. Additionally, some organising bodies will award a KO to the opponent if a player has been knocked down three times during a round.


Boxing has a lot of restrictions in comparison to other contact sports. For instance, boxers are forbidden from hitting the opponent below the belt, spitting, holding, pushing, biting, tripping, kicking, head-butting and hitting with any part of the arm besides the knuckles of their fists. Additionally, they cannot hit the opponent’s back or back of the neck, and are not allowed to grab the ropes or the opponent when punching.These can results in fouls.

The referee will call for fouls, which can lead to a deduction of points  disqualification or causing the player to automatically lose the round, depending on the severity of the foul committed.