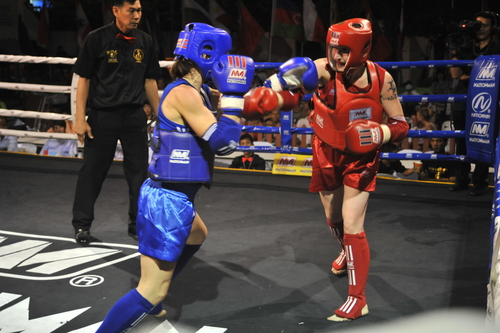 Since each round only lasts three minutes, boxers have to make good use of their time in order to score as many points as possible and win the bout. The scoring system was revamped in 2011, so learn more about the how boxers score points in this article.

Instead of the previous traditional computer punching scoring system, amateur boxing has shifted to the 10 point scoring system, which is also the system used in professional boxing.

In the previous scoring system, the boxer only gets awarded a point if a majority of the judges hit a button to award him the point within one second of the punch being thrown. Instead of this system, judges are now required to award the fighter that they think performed best in the round with 10 points.

For instance, if the round is closely matched, the end score for that round will frequently be 10-9 in favour of the better fighter. However, if a knockdown occurred during the round, the player who got knocked down will usually be given a score of eight against his opponent, and an extra one point deduction for every knockdown. For every serious foul committed, a point will be deducted.

Every punch counts, so boxers tend to try combinations in order to land as many punches as possible in the three minutes. While punches will inevitably result in the judges awarding more points to the fighter, knocking down an opponent does not, giving the boxers less incentives to attempt it. However, the player that gets knocked down will receive a point deduction from the judges.

The judges will each award a score to the boxers, and the boxer demonstrating the higher number of punches will be awarded 10 points. If a knockdown did not occur during the round, the opponent is likely to receive nine points, and eight if he was knocked down.

If all the judges choose the same fighter as the winner, the boxer would have won by unanimous decision. If majority awards one fighter victory, it is known as winning by majority decision. Additionally, if two judges prefer one boxer as winner while the other judge chooses the opponent, the first boxer would have won by split decision. If a judge deems the first fighter to be the victor while the second judge deems his opponent the winner, and the third judge is undecided, it will be known as a draw.

Punches are only counted if the judges deem the force to be sufficient and  it is a clean punch. However, this can be subjective as the definition of what makes a good or acceptable punch  can differ from judge to judge.