Bigger waves to come for canoeing 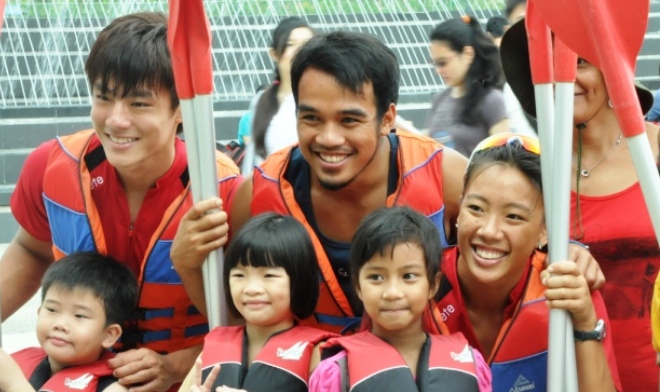 Many do not know the difference between a canoe and a kayak. And like most people, I found myself baffled at the terms used almost interchangeably when I attended a recent fundraiser at the Marina Barrage on the morning of 13 January 2013.

Jointly organised by the Singapore Canoe Federation and Singapore Heart Foundation, and held in conjunction with the Singapore Canoe Marathon, “Paddle & Love It” also consisted a Kayaking clinic in which Primary School children from the West Coast Children’s Club were lucky enough to be introduced to the sport by personal coaches from Team Singapore’s Canoe-Kayak team.

It was there that I learned the difference between a canoe and a kayak. While there were obvious similarities, Kayaks generally involved sitting with legs outstretched and using a double blade paddle; while canoeing involves typically a single blade and the athlete kneeling in the boat.

Although a well-known sport, a quick chat with 2 of Team Singapore’s athletes showed that canoeing/kayaking has yet to become popular outside of the schools and CCA circle, particularly as a recreational sport.

Not just a competitive sport

This is because most people still view it as a competitive sport, claimed Brandon Ooi of Anglo Chinese School (Independent). “One of the popular misconceptions is that people do not see it as a recreational sport. That’s why events such as this (Paddle & Love It) are perfect in helping to reach out to the public and to show them that there is both a competitive and recreational side to this.”

"Over here most of us are not exposed to the sport until quite late, I would’ve loved it if I had been given the chance to paddle about as a child. It could possibly have taken me further,” added the 18-year-old who harbours dreams of becoming an Olympian one day.

His teammate Sarah Chen, 20, is waiting for life to start at Nanyang Polytechnic and has gone from strength to strength after first entering the national set-up while trialing for the Youth Olympic Games.

“I first started recreationally but then decided to give it a try as my sister was already in the team. It is a really rewarding sport and for those who intend to do it competitively there is a lot to look forward to,” she said. “Many people love to sit in banana boats when really canoeing/kayaking is way more fun. I really hope it becomes big one day.”