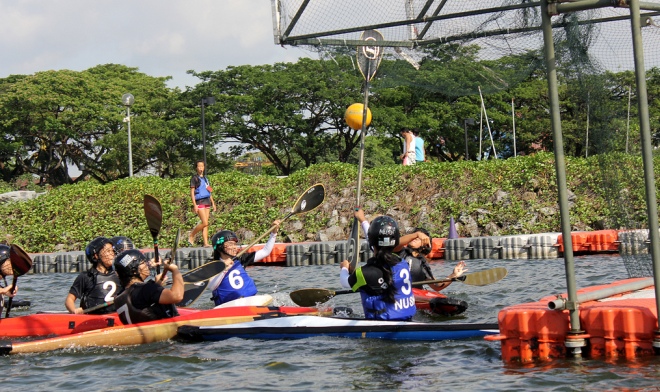 Take a guess: what do you get when you combine basketball, canoeing, and water polo all in one concoction? That is right. You get the unique game of canoe polo.

“It was quite a new sport when I first saw it, and it was quite challenging,” said Desmond Cheng, current coach of the Singapore Polytechnic Canoe Polo team and a player himself, “When I saw the players moving really fast using kayak tackles, it kind of amazed me.”

Set up on a water pitch that measured 35 metres by 23 metres, a battlefield is set between two teams of five players each at any given point in time, with substitutes outside the boundaries ready to take the place of their teammates.

With the element of the ball and the five players on each team, one is able to see the close relations of canoe polo to basketball and water polo.  Because the players are in kayak boats throughout the game, that is where the canoeing maneuvers come to play. Suspended above the waters are two goal nets, and the aim of the game is to score as many balls into the goals as possible.
The game itself looks deceiving from afar- it seems gentle, but the truth is far from that. Take a closer look and one will realise the intensity of the sport. Considered as a contact sport, most people do not know that pushing a player with possession of the ball on the shoulder or the back or executing kayak tackles is allowed. Newbies to the sport are usually surprised at the physical aspect of the game. There are rules to protect the players though, one of them being the illegal paddle where a player’s paddle is too near the opponent’s hand. 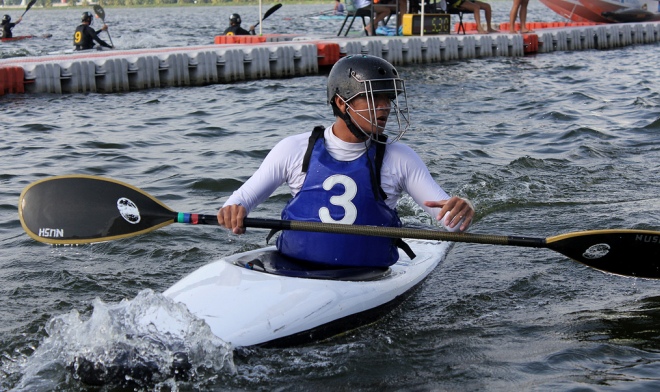 There are some basic techniques that are essential to the sport. Often into the game, the players capsize, but that is where the “hand roll” comes in to get the kayak upright again. In order to be snappy to react, players utilise a “stern-turn”, in which they push their sterns under the water to turn faster. Cumbersome as the kayaks can get, getting trapped among the opponents’ boats is inevitable. Players use a technique called “bow-over” where their bows go over the opponent’s boat in order to avoid being constrained by the other party.
Quick reaction and accuracy
Already complicated with its name, the thought process in canoe polo further dumbfounds people who have never played the game before.

The game is not just about passing a ball around and trying to score- it requires strategising, quick reaction and accuracy in the midst of chaos.
“You need game play when you play the sport, not just personal skills,” mentioned Kheng Yun Lin, who is a player herself for Singapore Institute of Management.
Furthermore, anything a player does has a domino effect on the other players mainly because canoe polo is a team sport.
“If you run up and down by yourself, it is very tiring. You need your teammates to support you whenever you lose a goal or you need someone to cover you,” said Kheng.
So far the kings of the sport hail from Singapore Polytechnic. They are well known to have vast experience from overseas and learning from the international players. Most of them come from the national team, and it is with an athlete’s confidence that they carry themselves, such that anyone within a mile away can easily spot them.
Canoe polo has been making a steady climb up the popularity ladder, and it may just become the most popular water sport before you know it.