Improve your batting in Cricket 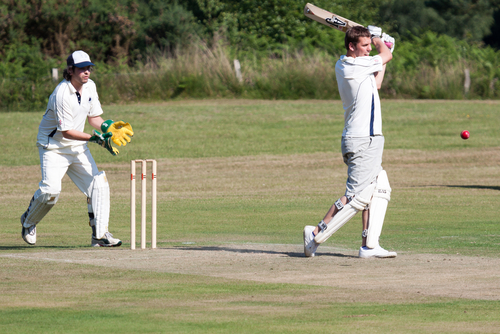 The sport of cricket has seen its fair share of great batsmen over the years. From Brian Lara, Ricky Ponting to Sachin Tendulkar, cricket’s amazing hitters captures our imaginations and inspires the next generation of cricketers.

As batting is one of the most vital aspects of cricket, it’s important that players learn how to bat correctly in order to execute difficult shots and score lots of run. Always remember that there is no substitute for hard work and remember these pointers that will help to improve your batting technique.

Stance
There are several stances that are commonly used by a cricket batsman, and the most common of which, is the side-on stance. However, no matter what stance a batsman chooses to employ, it is most important to ensure that the stance provides him with stability in order to execute shots accurately with a good amount of strength and power.

Every batsman should have their feet shoulder width apart, either with one foot on the popping crease or both feet on either side of the crease. Additionally, when it’s your turn to bat, you should you’re your knees slightly bent, as it ensures that you will be able to quickly transfer the weight to either your front or back foot in relation to the ball’s speed and direction.

Grip
A good grip is vital to every batsman in order to execute a range of shots whether they be pace, power or finesse. More important to take note of is that how one should grip the bat depends on which hand is the dominant hand. For instance, for a right-handed batsman, his left hand should be on top while gripping the handle, and the opposite for a left-handed batsman.

The batsman should then attempt the ‘V’ grip, by placing his hands close together on the handle, with the hand on top gripping tighter and the palm of the lower hand facing the wicket keeper. A ‘V’ shape will be formed by positioning the thumb and index finger so that a ‘V’ shape can be seen down the top centre of the handle.

Backlift
Once the batsman has accomplished both a stable stance and a good grip, they should stay alert and keep their eyes fixed and concentrated on the bowler. The batsman should lift the bat up behind him in anticipation of meeting the ball, once the bowler has indicated that he will be delivering the ball. It is important that the batsman attempts to backlift as soon as the bowler is in action, or it will be too late to judge how best to meet the ball and react accordingly to make a good shot or block.