Improve your catching in Cricket 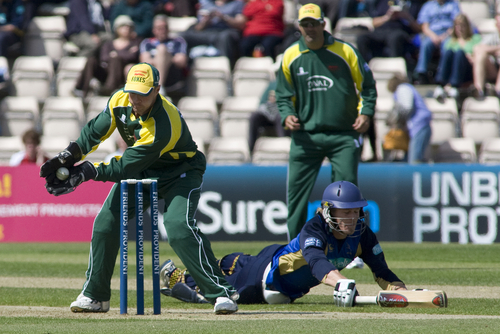 Great hand-eye coordination, an instinctive sense of anticipation and big doses of bravery are important attributes that all outstanding fielders in cricket share in common. While some players have these qualities more than others, there are still various catching techniques that a fielder can employ in order to catch the ball better.

Here, we take a look at one of the most common types of fielding, which is close catching. Check out these tips that you can use in order to improve your catching in cricket and follow them carefully while you’re practicing and playing.

High Catch
A high catch refers to a ball that is coming in from a high position, usually over the fielder’s head or towards the fielder’s head. Fielders should employ the ‘reverse cup’ method in order to accomplish this catch. The reverse cup, sometimes also known as the ‘Australian cup’, sees the player with his fingers pointing up, with both thumbs locked and index fingers touching. The fielder should also bend his knees slightly, in order to prepare for the impact.

While attempting the reverse cup, the player should keep in mind to have his hands relaxed, as tense hands have a tendency to allow the ball to bounce off instead.

Mid Catch
The ‘orthodox cup’ should be used to catch any ball that comes in from below chest height, and it is one of the most basic catches that a fielder can employ in cricket. It involves the fielder having both hands relatively close to the body, as having the hands far away from the body can result in a loss of control.

Next, position your hands so that the pinkie fingers of both hands are touching, and the palms are facing upwards and outwards. Similarly, the hands should also be relaxed and poised to close around the ball. When the ball is close to the hands, the fielder should start bringing his hands nearer to the body, as the ball is usually traveling at high speeds and outstretched arms can cause injuries.

Slip Catch
The slip catch sees a different technique than both catches above, as slip fielders are specifically placed to catch edged balls that the wicket keeper cannot reach.

The slip fielders should have their feet positioned slightly pointed inwards, with the weight balanced on the ball of the feet and the inside of the feet. Next, the fielder should also make sure to keep his body low, as it enables him to catch low balls, as well as being more convenient and faster to spring up to reach higher balls.