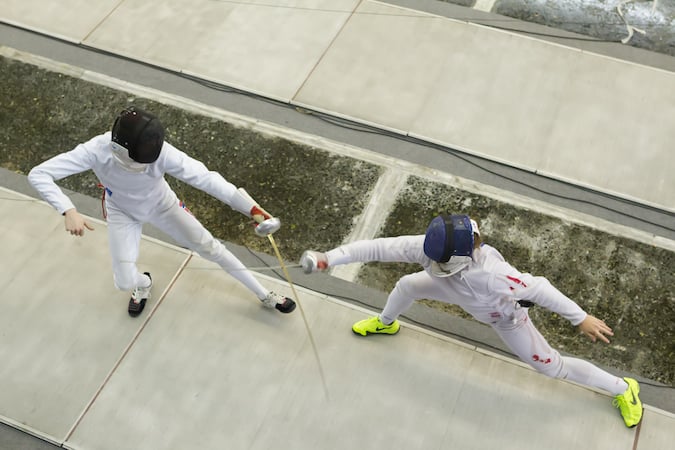 In order to score in fencing, one needs to achieve hits on parts of the opponent’s body. It is also vital to defend against these hits and touches to prevent the opponent from winning. Here are some of the most common defensive moves.

The parry is the most frequently used, where the fencer deflects the opponent’s blade. It also involves a retreat and a riposte, with the latter being a quick responsive thrust forward.

Next, use the part of the blade closest to the hilt, which is the strongest part, to deflect the opponent’s blade away from the target area.

There are several types of parry movements, categorised according to which direction the opponent’s weapon is coming from. For instance, the prime parry involves the blade coming from downwards and aiming to the inside, the seconde parry with the blade downwards and towards the outside of the body, and the tierce parry deals with blades coming from the en-garde position where the blade comes from higher up and towards the outside. There are eight basic parries in total, with corresponding blade directions.

The passata-sotto is a straightforward way for the fencer to avoid getting hit by the opponent’s blade. The fencer drops one hand to the ground of the piste and bringing his body downwards, so that it is not in the way of the incoming blade. The passata-sotto is often followed by a counter-attack, done by the fencer straightening his weapon arm in an attempt to hit the target area of the incoming opponent.

Another evasive action, the in-quartata sees the fencer executing a quarter turn away from the incoming blade, so that the torso is concealed but the back is exposed.