Governed by the Federation Internationale d’Escrime (FIE), fencing has strict rules and regulations that participants need to follow in order to play. Here are some of the most common rules.

A fencing match has to take place on a strip that is between 1.5 metres to two metres wide, and 14 metres long. Also known as the ‘piste’, the strip has two lines known as the ‘en-garde’ lines located 2 metres from the centre. Additionally, two warning lines are located 2 metres from the end of each side of the strip that informs players that they are about to run out of space. If a player steps off the strip, a touch will be awarded to the opponent.

Both participants have to enter the piste fully dressed, with exception of the mask, stopping at the en-garde lines from which they will start the match. Additionally, before the bout starts, both fencers are required to salute each other and the referee, and failure to do so might result in disqualification. 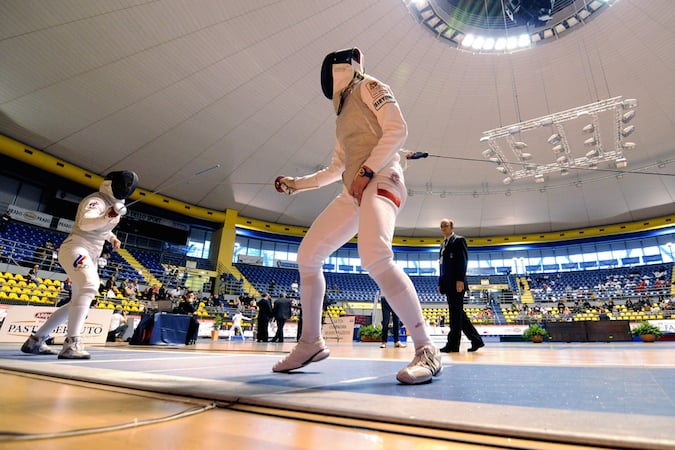 A ‘fencing phrase’, referring to an uninterrupted exchange of blade actions consisting of offensive or defensive movements, will then commence and only stopped for several reasons. The referee will call for a phrase to be halted if a ‘touch’ has been scored meaning an opponent has been hit, a rule has been broken, or if the bout has become unsafe or too messy for the referee to follow. Once the phrase has been halted, both fencers have to return to their en-garde lines before resuming play, but only in the event that a point has been awarded. If no point has been awarded, the fencers remain at their respective positions before resuming.

Penalties are also a part of fencing. For example, if a yellow card is awarded to a player, the player is simply warned. However, if a red card is shown, the fencer would be warned, and his opponent will be awarded a point. If a black card is flashed, the fencer could either be excluded from the bout, the competition, the venue, and in serious cases, future competitions as well. In some instances, spectators can also be given cards if their behaviour is unsavoury.

Offenses under which penalties are given are broken down into four categories. The first group, which sees a yellow card, includes delaying the bout, making physical contact with an opponent and removing equipment when the bout in on going. The second, which results in a red card, are for violent actions. The third group, which sees the initial red card, followed by a black card if fouls are committed again, are meant for disturbing a bout or falsifying inspections marks. Lastly, black cards are given for the fourth group of offences, which includes doping and other breaches of protocol, such as refusing to salute.