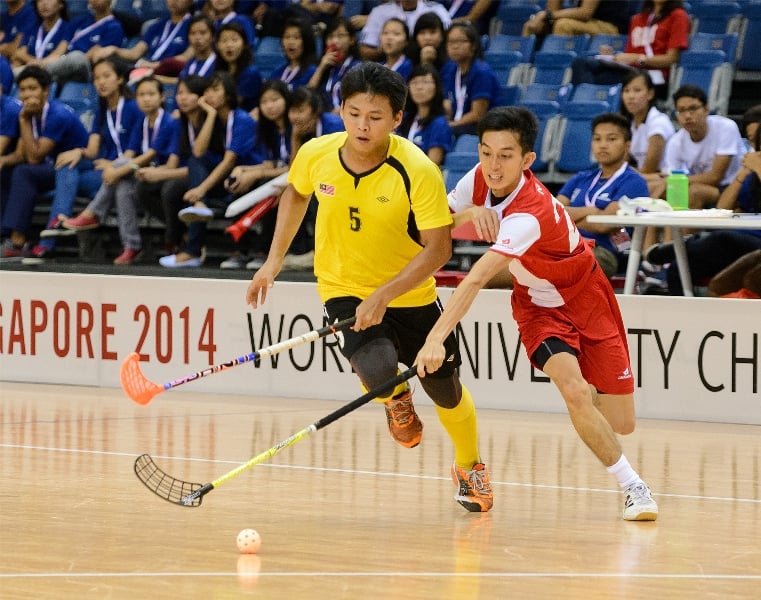 A floorball game can be played with three to five outfield players, as well as  a goalkeeper on the court for each team. The goalkeeper may be substituted for an additional field player if the coach desires. This can be an advantage for the attacking side of the team, but can also be disadvantageous when it comes to their own defence.


The team is also allowed to change players at any time in the game, with entire changes in lineup common. Individual substitutions happen from time to time, but usually only when a player is exhausted or hurt.

A competitive floorball game is officially played over three periods lasting 20 minutes each. The time is stopped in the case of penalties, goals, time-outs and any situation where the ball is not considered to be in play. An intermission of ten minutes takes place between each period, where the teams change ends and substitution areas. Each team is allowed one time-out of 30 seconds, often used late in matches. There are two referees to oversee the game, each with equal authority.

During a game, there should be no jumping, with it being compulsory for one foot to be on the ground when receiving the ball. Players may also not go down on two knees to make plays or block shots. Only the goalkeeper may play from his or her knees.

Checking, which is a defensive technique aimed at disrupting an opponent with possession of the ball, is prohibited in floorball. However, controlled shoulder-to-shoulder contact is allowed. Pushing players without the ball or competing for a loose ball is also disallowed, and many of these infractions lead to two minute penalties. In addition to checking, players cannot lift another opponent’s stick or perform any stick infractions in order to get the ball.

When a player commits a foul, or when the ball is deemed unplayable, play is resumed from a free-hit or a face-off. A free-hit involves a player from one team starting play from the place where the ball was last deemed unplayable. This could be compared to a free kick in football.

Other than to start the game, a face-off is awarded when the ball is damaged, the ball is not playable, the referees cannot decide the direction of a free-hit, after a failed penalty shot, or when a player suffers from serious injury.