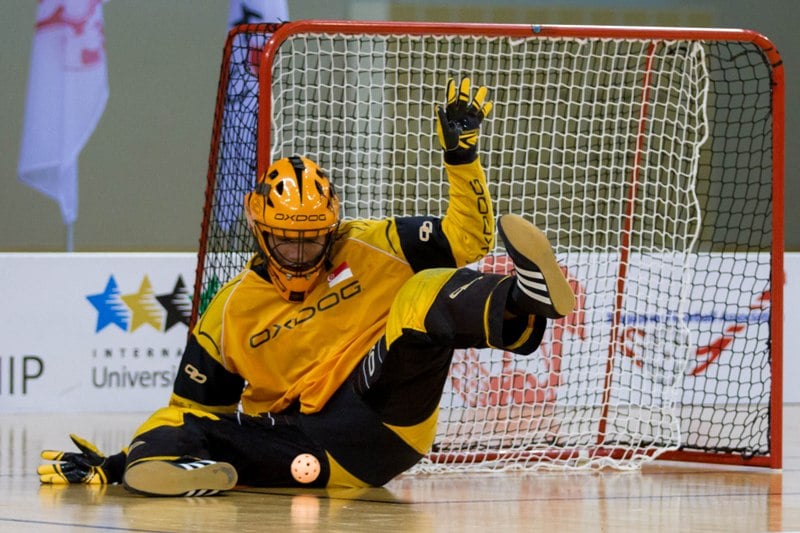 The goalkeeper is the last line of defence. He or she is free to defend the ball when within the goal crease. Jumping, kicking, hitting and blocking are all allowed if the action is directed at the ball.

Positions
Fast reflexes may be what distinguishes the best goalkeepers from the rest, but a successful save usually comes from reducing the angle. By doing so, the goalkeeper reduces the area where an attacker can shoot, making the whole undertaking more difficult. Having more experience will teach the goalkeeper to read the game, and move into the right position.

A goalkeeper positions himself or herself in a way to maximise the area of the goal covered. No equipment is allowed to artificially increase the area covered, but the right moves can ensure that the attackers do not have an easy shot. Goalkeepers generally choose to kneel, having their upper bodies cover the centre of the goal. Their arms are kept up, ready to catch high balls.

Depending on where the ball is, the keeper moves to the left or right of the goal. He or she may also move forward and backward. The legs are generally kept closed, so that the ball cannot be played in between.

Angles
The goalkeeper should situate himself or herself in a position such that a straight line could be drawn between the ball, the centre of the goal, and the goalkeeper. If the attacker is further away, the goalkeeper can move forward to increase the covered area.

Goalkeeper pass
Players are not allowed to play a pass to their own keeper. If a ball is played to the keeper, the goalkeeper may either let it pass, or kick it away with his or her feet. If the ball is touched with the arms, a free-hit is given to the opposing team.

Throw-out
There are many ways to throw out a ball. Most often, rather than throwing the ball, the goalkeeper rolls the ball. A throw-out may also be used to launch an attack directly. This is common on small courts, or where one of the attackers is in a promising position close to the other goal. In this case, a throw-out rolling flat on the floor would be too slow. Instead, the goalkeeper picks up the ball and throws it above the head, toward the floor, so it bounces towards the attacker. The only thing to consider with such wide throw-outs is that the ball needs to touch the floor before it crosses the centre line.