How to attack in floorball 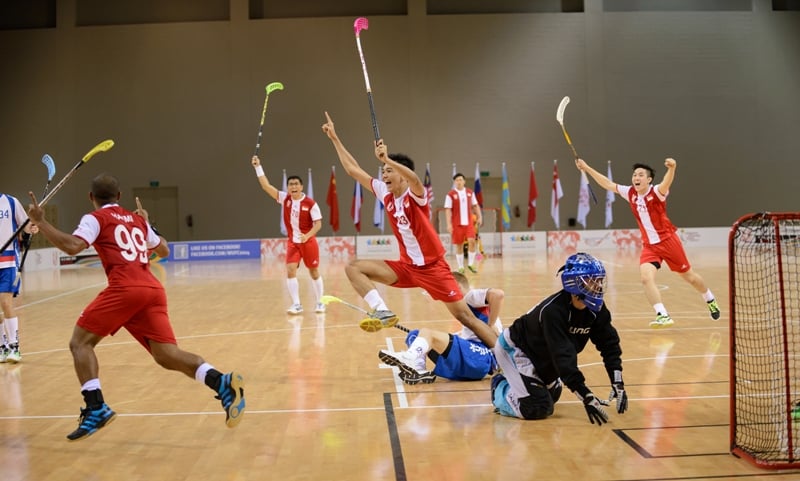 If the player in a team has the ball, everyone else in the team is responsible for attacking. The attackers try to open up space and with that, create possibilities to play the ball. This means that they need to run continuously to create space and draw defenders out of position.

Opening a game
When you have the ball in defence, you start the attack by opening the game. All the moves here assume that the ball is with one of the defenders in the corner. For balls right in front of your own goal, simply add a pass to the defender in the corner.

Here are some of the moves for opening a game:

●    Through the centre
This is a common way to open the game. The ball is played from the defender to the centre, who then distributes the ball towards one of the attackers in the corner.

The attackers run forward from the centre line as soon as the attack is launched. By running this way, they are also ready to receive a ball directly. The centre will try to play the pass as soon as possible, somewhere around the centre line. Direct throw-outs to the centre are a possibility, but many teams like to take the time to organise themselves, and thus start in the corner.

●    Direct
The ball is played low from the defender directly to one of the attackers. The centre also runs forward in order to assist the attackers. This is an alternative to playing the ball through the centre, preventing the opponents from being certain where the ball will be played.

●    From the corner
This move applies when the ball is received by the attackers directly from the defenders, or when the centre is involved.

●    Crossing over
One of the best ways for opening up space is to run around. The two attackers can swap their sides at the same time. This may confuse the defenders for awhile, and create a moment your team can take advantage of to score. It is a good idea to try crossing over in training a couple of times, so that both attackers know where they want to run. Uncoordinated sudden runs can lead to collisions.