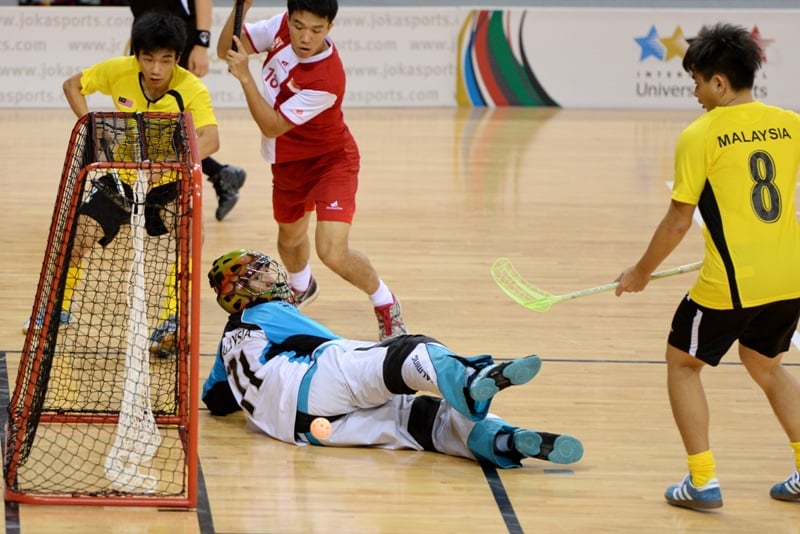 Floorball tactics are defined by basic formations, but sudden changes in formation sometimes take place to throw off opponents.

The ultimate aim is to score goals, and goals can be scored more easily when the defence is disorganised. On the other hand, the aim of the defenders is to prevent goals. This is done most effectively by keeping opponents from taking direct shots on goal.

General positions
There are normally five outfield players and one goalkeeper for each team. The basic positions are: a goalkeeper, two defenders, a centre and two attackers.

The centre is responsible for supporting the attack and to support the defence. This means that centres are required to run a lot and have an excellent sense of positioning.

These areas are the primary zones of responsibility, and depending on the situation of the game, any of the players might be found elsewhere on the court. There is also a certain areas of overlap, and players may choose to swap roles during the game. This means that the left defender and the right defender may choose to swap. Another common scenario is that a defender comes into the attack, and then either the centre or the attacker from the same side drops back to temporarily take on the role of defender.

Defending
Defenders typically wait for attackers to make a mistake rather than chase them off the ball. If you try to chase a ball, and make a mistake, the attacker will often be left open to shoot. Concentrate on closing down space and intercepting passes.

As a defender, you should:

Attacking
As an attacker, you are concerned with keeping the ball and opening up possibilities to shoot on goal.

As an attacker, you should:

●    Try to open up space for more options to play.
●    Try to play safe passes (making sure that they arrive at their intended target).
●    Shoot on the goal if you can.
●    Confuse the defence by running continuously and switching sides.
●    Try to keep the ball moving.
●    Run into a position where you can receive the ball.