Running with the ball in floorball 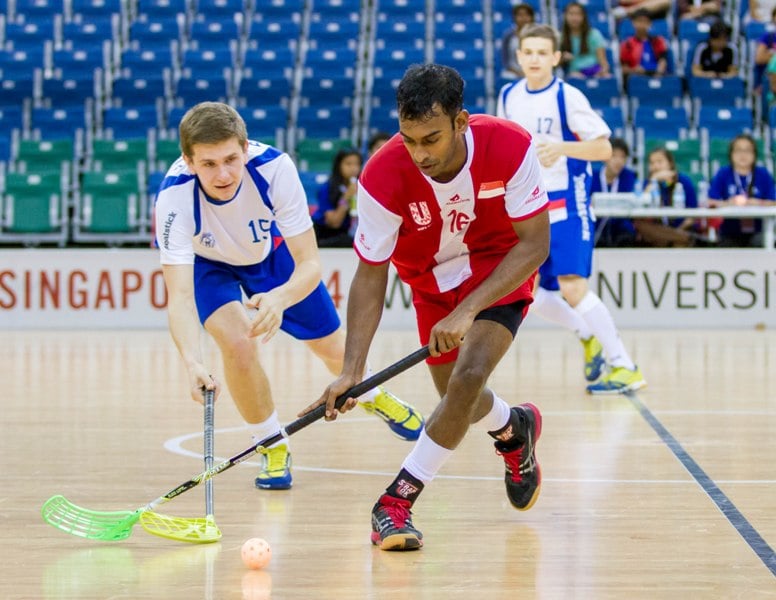 Running with the ball is a basic skill. In order to be a good floorball player, one must know how to handle the ball with the proper technique.

Using the forehand and backhand
The ball is kept in front of the player, usually slightly to the side. The ball should touch the middle of the blade all the time, or at least be very close. It is a soft touch, not a strong hit. A soft touch is necessary, so the ball does not bounce in an uncontrolled manner. This way, the ball is played forward, ahead of the player. The player then catches up with the ball and hits it again. Advanced players use this move most often when attempting to outrun an opponent.

Some players find it easier to keep the ball between the forehand and the backhand. The ball is kept in the centre part of the blade, and players try to constantly touch the ball or be very close to it. In fact, many players use a mixture of the two approaches, running with the ball right of the blade, and at times using the backhand to control the movement of the ball. The use of the forehand and backhand requires a bit more skill, but it means that the player is free to move either left or right.

The ball is played forward with the back to middle of the blade, in a more sideward rather than forward movement. Once the ball has reached 30 to 40 cm on one side, the tip of the blade is used to draw the ball backward again. As the ball is drawn backwards, the blade is turned, so that when the ball is furthest back, it is ready to push the ball forward again.

The ball constantly touches the blade. The move depends on the movement of the blade, and depending on the hook of the blade, this can be a much easier way of keeping the ball under control. Nonetheless, even with a large hook, skill is needed to synchronise the movement of the blade with that of the ball. Many players find this means of ball control difficult to maintain for a prolonged period of time. However, the key advantage is that there is little chance for the defender to intercept the ball, as the blade protects the ball from the side the defender is likely to approach. Swift changes of direction are possible with this approach too.