How do I dribble for soccer? 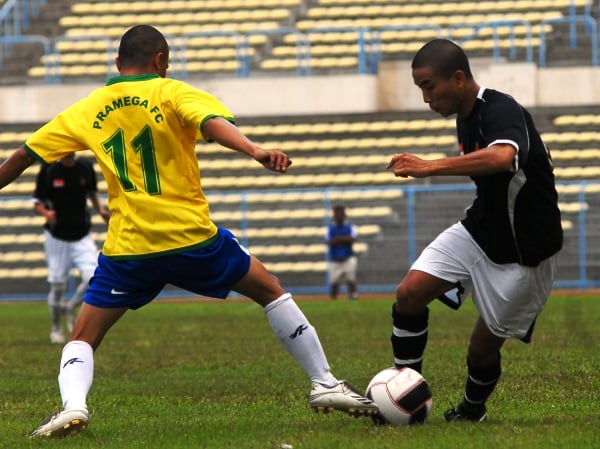 Ever seen a player like Messi effortlessly dribble past 4 opposing players and then proceed to score a beautiful goal, sending the commentator and crowd into a roaring frenzy? If only you could do that too one day.

Some of the most spectacular goals are usually the product of outstanding dribbling combined with the ability to shoot in motion, but what really is the point of dribbling?

Moving with the ball

Dribbling is essentially the art of moving the ball past your opponent without him being able to tackle you such that you retain possession.  Dribbling makes it easier to achieve the aim of the game, scoring a goal. Because ultimately, the only thing that stands between you and scoring goals is the opposition. If you can negate the opposition with fancy dribbling footwork, the game just becomes that much easier.

Before you look at dribbling as a skill however, it is important to first master the art of close ball control. Once you have achieved a good level of comfort with the ball at your feet, dribbling will be a lot easier to master. In football, dribbling is best carried out by pushing the ball forward with your laces on either foot. If you're in rapid motion, you could use the edge of your toes (instep or outstep) to push the ball ahead of you quicker. So long as you retain possession of the ball while moving, you are dribbling.

There are all sorts of dribbling styles you can employ to move past your opponent and some are even used in combination. But the general idea on how to dribble past an opponent is to mislead him into thinking you are going to do X when you really are going to do Y.

In this article, we will explore 3 basic techniques on how to get past an opponent.

1. The quick change of pace

Picture yourself running down one flank of a football field and your opponent is heading towards you head-on. If you decide to try and sprint towards him, you become way too easy to anticipate. You make yourself vulnerable to his tackling and it is very likely that you will lose the ball.

Instead, you should decrease your pace to a slow jog to force him to make the first move. As you both stand off near each other, you have to wrong-foot him momentarily. You can do this by faking a pass or shot and using your foot to hook the ball in the opposite direction past him by the side, sprinting after the ball.

Another way is to just simply side-foot the ball past him usually on the outer side nearer to the line. This works because defenders are trained to prevent opponents from cutting in from the inside. A change of pace is effective as both of you are stationary and you are facing forward whilst he is facing backwards. You will have the edge because you started picking up speed first.

This is another effective technique that is used to trick a defender by feinting movement in one direction when you really are going to move in the other way. This works by using your shooting leg to make an outward hook over the ball, without touching it. This would make it appear as if you are going to use the outside of your foot to push the ball past the defender. Instead, quickly use the outside of your other foot to push the ball past him in the opposite direction.

Another way of looking at it is to imagine you are standing still and the ball is directly in front of you. Swing your right foot over the ball. Now your right foot is to the right of the ball and left foot is behind. Use your left foot to push the ball to your left now. This must be done quickly for it to work and sometimes your footwork can be so convincing, it would leave the defender off balance as you dribble past him.

This involves putting the ball through the opponent's legs in order to get past him. Out of all the dribbling techniques, this has to be the most embarrassing for defending players who falls victim to it.

It works with you first exposing the ball. Leave the ball in front of your feet to give the defender the impression that he can take the ball from you. As he sticks out his leg to take the ball, a gap will open between his planted leg and his out-stretched leg. Push the ball between his legs and run around him quickly! It could also work if you are dribbling sideways with the ball and chance upon your opponent opening his legs a bit too widely. 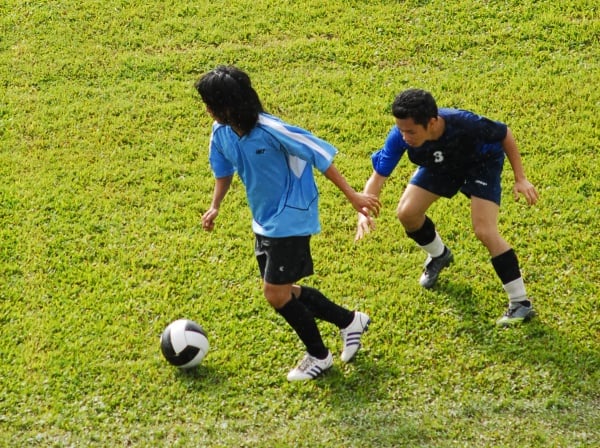 Always remember that in dribbling, the key component is speed. It doesn't matter how many times you get pass him if he's just going to catch up with you again. After dribbling past him, you must continue to move fast to breakaway from him.

How fast you can move your legs and run will add up up to the success of your dribbling. The best dribblers in the world have small frames, great agility and balance. And after beating a defender, its hard to catch up with them again because they move so fast. In essence, speed plays a big part in becoming a great dribbler.

Now that you've understood the theory behind dribbling and a few techniques you can use, its time to look at some dribbling drills.