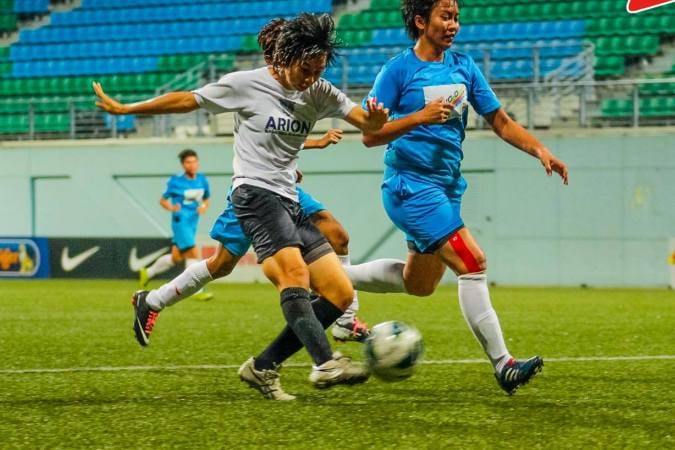 When one thinks of football, they usually think of two teams of rowdy men chasing after ball, elbowing each other and getting into fights. I don’t blame you, that is the first image that pops into my head as well.

However, these days we see more and more women trying to change that image as they become more involved in the football scene here in Singapore. I for one, applaud them as it is definitely very difficult to start playing a sport that is so traditionally dominated by men. It is these women that are challenging the stereotype and wanting to get their voices heard and their skills noticed.

One of these brave women is Yeong Sheau Shyan who is an Asian Football Confederation (AFC) ‘B’ Certificate licensed coach. She used to play on the Team Singapore women’s team and has coached both B and C Division school teams. Previously a Secondary School Maths and PE Teacher for 6 years, she is now actively involved in the development of women’s football in Singapore. We had a chat with her to find out more about the Singapore community in Singapore.

Sheau Shyan had a pretty late start in playing football, only starting when she was doing a football module while training to be a PE Teacher at the National Institute of Education (NIE). She began to play competitively and later decided to take up a career as football coach instead of a teacher. She started Arion Women’s Football Club with her peers which later became Arion Football Academy.

Unlike girls today, Miss Yeong didn’t have the opportunity to play football in school because the sport wasn’t offered to girls in her day. She says it was a “very small and closed community” that was hard to break into unless you already knew the ins and outs of playing the game.

Fortunately for her though, she had a supportive family backing her. Although concerned about her decision to give up a stable job in teaching to start up her own venture in football, they continued to support her.

Miss Yeong finds comfort in the knowledge that the population of girls playing football has seen steady increase in recent years, and people have a more positive view of female footballers. She also enjoys the community being tightly knit and once you’ve been in the scene for a while, you get to know a lot of people, and may even find friends on rival teams!

Her advice to girls who want to take up football is to find out more about the sport and realise how popular it is amongst girls the world over, regardless of what others might think. She feels that the media in Singapore hasn’t been supportive in promoting women’s football and the older generation is rather backwards thinking and ill-informed about the sport.

In her words, “Girls in Singapore deserve the freedom to play any sport they like and should not be restricted by discrimination. Nobody should be worried that they are not good enough to play football. Everyone needs to start somewhere and there are avenues for all to play recreationally, not just competitively.”

It is this determination and courage in her that has driven her to follow her dreams and set up her own academy. So far, her efforts has already helped spread awareness for women's football in Singapore and increase the population of female football players here.

We salute her for her efforts.