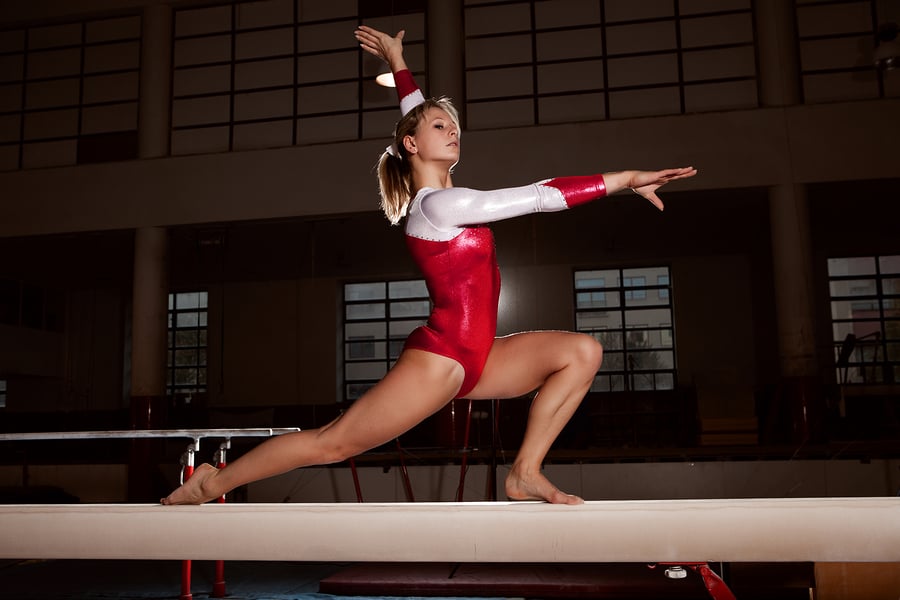 There are many terms used in gymnastics that may be hard for a novice to understand. We explain some of the most commonly used ones in this article.

A stunt in which the gymnast turns completely over in the air without touching the apparatus with his or her hands.

Flip or somersault, with the feet coming up over the head and the body rotating around the axis of the waist.

The height or degree of execution of a movement. In general, the higher the salto or the more breathtaking the movement, the better the amplitude and the score.

A double salto with a full twist. The complete twist is performed during the second salto.

To leave an apparatus at the end of a routine; usually done with a difficult twist or salto.

Also known as a flip-flop or back handspring. Take off on one or two feet, jump backwards onto hands and land on the feet. This element is used in a majority of tumbling passes on the floor exercise. It’s also used a great deal on the balance beam.

A double salto with a full twist. The complete twist is performed during the first salto.

A swing in which the body is fully extended and moving through a 360 degree rotation around the bar.

Springing off the hands by putting the weight on the arms and using a strong push from the shoulders. This can be done either forward or backward and usually with a linking movement.

Movement from a position below the equipment to a position above, usually on the uneven bars, parallel bars or high bar.

Body bent forward more than 90 degrees at the hips while the legs are kept straight.

Changing direction or moving in a circular motion by twisting in the handstand position.

Leaving the bar to perform a move before re-grasping it.

A dynamic turning movement, with a push-off on one leg, while swinging the legs upward in a fast cartwheel motion, into a 90 degree turn. It is used as a lead-off to a number of skills.

A requirement on the pommel horse, which combines cuts and undercuts. The legs cross and uncross in a scissor-like movement.

A position in which the knees and hips are bent and drawn into the chest, with the body is folded at the waist.

Not to be confused with a salto, a twist occurs when the gymnast rotates around the body’s longitudinal axis, defined by the spine.

The artistry, or the degree of rhythm and harmony, displayed while a movement is executed. In general, the more seamless a series of skills appears to be, the greater the virtuosity and the higher the score.