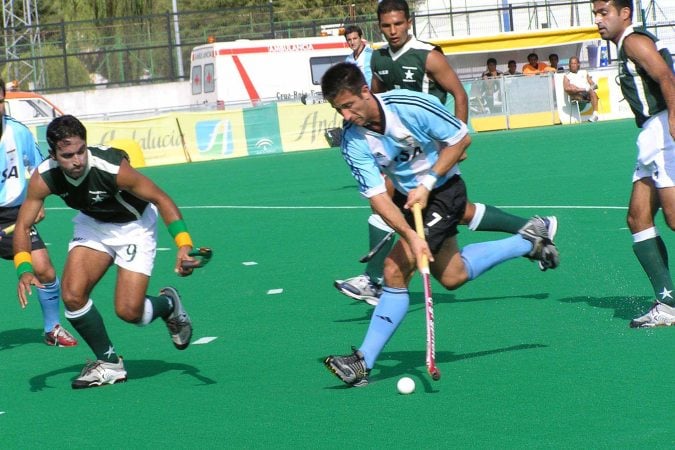 Every sport has its own set of rules and regulations and hockey is no exception. Many are usually confused between field hockey and ice hockey, today, we’re going to iron out all the confusion between them. We'll not look to bore you with the intricate details so we've singled out the 10 crucial rules you have to know to kick start your field hockey journey.

It doesn’t matter if you’re only going to be watching hockey or if you’re going to start playing it yourself, this guide is bound to come in handy.

1. How many players and teams are there on a hockey field?

Only two teams of eleven players each are allowed on the field at once, ten field players and one goalie. However, there’s an unlimited amount of times a team can sub in and out at any given time. This gives sufficient time for players to rest especially for beginners! Can you imagine sprinting around the field without a break?

2. Are you allowed to kick the ball?

This isn’t football so no, you cannot kick the ball. Players are only allowed to hit the ball with the flat side of their stick except for the goalkeepers who are allowed to use their body or feet to prevent the opponent from scoring. If you lose control and accidentally kick the ball, you’re not allowed to continue dribbling the ball. If you purposely kicked the ball to gain an advantage, you would automatically lose possession of the ball and if you sneakily tried to kick the ball but it didn’t gain you any advantage at all then play would continue.

3. How high can you swing your hockey stick?

In the game of field hockey, you are not allowed to swing your stick higher than your shoulders. When you’re taking a free hit or starting a corner, you cannot backswing your stick too high as that would be considered dangerous. You wouldn’t want to hit your opponent or worse, your teammate in the process!

Safety is the utmost important thing in every sport and with a fast-paced, exhilarating game like hockey, you’d want to take extra care not to injure yourself or any other players.

4. How many people are allowed to challenge for a ball?

What’s unique about hockey is, only two players are allowed to touch the ball at one time. If a third player interferes, it is considered as a third-party obstruction and the possession of the ball would go to the team who only had one player involved in the third-party.

The third-party obstruction rule almost often involves a player helping a fellow teammate out by obstructing the opposing team from playing the ball and intercepting it. This is also a foul and will lead to a free hit for the opposing team.

5. How many sides of the hockey stick are you allowed to use?

A player can only play the ball using the face of the stick. If you use the back side of the stick, it is a penalty and the other team will gain possession of the ball.

6. Is tackling allowed in hockey?

7. What are the different ways to score in field hockey?

A penalty stroke can be awarded for many reasons but the most common would be if a defender commits a foul that directly prevents a goal from being scored. In a penalty stroke, the goalie is the only one who can defend the shot and a single player at the stroke mark takes the shot. This is much like the penalties awarded in football.

8. What do the different cards in field hockey mean?

Similar to many other sports, a player who breaches the rule of the game can be shown a card by the umpire. There are three cards that can be awarded - green, yellow and red card.

The green card is the least severe of all, it serves as a warning to players and a reminder not to break the rules.

The yellow card has a higher degree of severity and players can be temporarily suspended from the match for a minimum of 5 minutes.

The red card is the most severe of all and players are permanently suspended from the match, forcing their team to play with fewer players.

9. How long does a hockey match usually last?

Field hockey is played in two halves. Each half last for 35 minutes and the break in between usually runs for five to ten minutes.

At the start of each half, a player starts the play by passing the ball from the centre of the field. This is the same way play is restarted after a goal is scored. Apart from the player who is making the pass, all other players must be in their defensive half. The team which conceded the goal gains possession of the ball for the restart.

10. How do we determine the winner?

Just like most sports, the team that scores the most goals by the end of the match is declared the winner. In the event that the score is tied at the end, either a draw is declared or the game enters extra time or a penalty shootout.

Now that you’ve learned the basic rules of the game, I’m sure you’re itching to pick up the hockey stick and play! But wait, there are a few other topics you might want to take note of such as the playing positions in hockey or how to shoot in hockey.

Get all these in your head and you’re good to go!