What is the difference between clay, grass and concrete tennis courts? 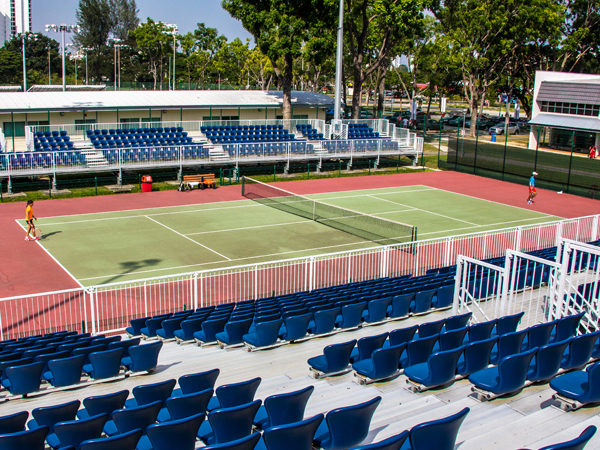 Ever wondered why Michael Chang excelled on the Clay Courts back in the 1990s while the great Pete Sampras, who has won all the major Grand Slams, has never won a Grand Slam played on the Clay Courts? This article will provide you with the low down on the 3 general categories of court surfaces: grass, hard court and clay.

The Grass Court is normally associated with the prestigious Wimbledon Championships, which take place every July, a tournament which has been graced by the greatest names in tennis such as Roger Federer, Pete Sampras and John McEnroe.

This surface is the fastest of all the tennis court surfaces due to its slippery surface. The ball has a lower bounce as the soil is softer than the materials used on the other types of tennis courts. The Grass Courts may also produce an unpredictable bounce to the ball due to the softer and slightly uneven surface of grass.

Due to the characteristics of the Grass Courts, the ball moves at a faster pace with a lower bounce thus favouring players with a good serve and net players.

Hard Courts are courts generally made from asphalt or concrete and are the most commonly available courts as they are easy to maintain. The Hard Court provides a surface where:

The Hard Court is generally considered by the International Tennis Federation (ITF) as a good surface for all types of players as it provides a good compromise between the Grass Courts and Clay Courts and is thus termed as a “Democratic Court”, which provides players favouring various styles of play, from the Serve and Volley player to a Baseliner, thus providing an even playing field.

Despite the proclamation by the ITF, experts have express opinions that the Hard Courts favour players with a good serve as the surface is still considered generally fast and base line players (players who enjoy long rallies) as the bounce of the ball is high and predictable.

The deep red coloured Clay Courts are synonymous with the French Open Championships. These courts are considered the slowest surface in tennis as the Clay surface:

Due to the these characteristics, the Clay Courts reduces the speed of a ball which is hit by hard hitters as it slows down the speed of the ball, making it easier for an opponent to return the shot. This may explain why players such as Pete Sampras, who favours the serve and volley game, has never won the French Open Championship (the only Grand Slam played on a Clay Court) despite his dominance of the Grass and Hard Courts in the 1990s.

Clay Courts are favoured by baseline players and players who generate heavy spins on their shots, example of such players are Michael Chang and Rafael Nadal who is often dubbed the King of Clay.