Chinese Taipei's Pai Ya Yun and Cho Hsuan seeded second in the girls doubles proved to be too strong for the top seeded pair of Singapore's Ria Vaidya and Japan's Miyo Kobayashi. (Photo credit: VOXSPORTS for SportSG)
Usually, when we think about tennis, the first players that run through our heads will be the likes of Novak Djokovic, Rafael Nadal and the great Roger Federer. In the little island of Singapore however, a storm is rising as a new era of tennis players are beginning to emerge from the Republic.

Boosted by the emergence of the Women’s Tennis Association (WTA) bringing down one of their marquee events annually in Singapore starting from next year, Singapore has seen a new wave of youth players opting to spend more time playing tennis, training full time and taking up online schooling to further pursue their passion.

This new upcoming presence was observed at the Singapore ITF Junior Open 2013, held in Singapore at the Kallang Tennis Centre for the twelfth year running. Amongst the strong playing field were fourteen Singaporeans, with girl’s second seed, Riya Vaidya leading the charge for the Singapore contingent together with Isaac Ong and Joshua Liu, the latter who would reach a new milestone in his young career on home soil.

As one of the last stops on the event calendar for the tournament year, the Singapore Open featured a strong Asian field, promising to push our local athletes to their breaking point with some of this year’s crop already making their push towards the Futures events on the international scene next year.

The running started off badly for the Singaporean contingent as top hope and second seeded Ria Vaidya, recovering from a shoulder injury was knocked out in the first round to Chinese Taipei’s Chen Tzu-Hui in a competitive affair. Of the fourteen, only three Singaporeans made it to the next round and the field of competitors reminded spectators why the Junior ITF Open is the perfect stepping stone for any tennis player’s career.

However, the Singaporeans were not left disappointed as Shaheed Alam, Isaac Ong and Joshua Liu, proceeded to the round of 16 in the boys’ singles event. Isaac and Joshua managed one better than their counterpart, winning their round of 16 matches and proceeding to the quarter-finals. However, the competition was proving too much for Isaac as his recent bout of food poisoning was beginning to take a toll on his body, forcing him to retire in his match against Takuya Kuriyama of Japan in the third and deciding set due to heat exhaustion.

Poster boy
It was all left to Singaporean poster boy, Joshua Liu, whose tenacity and determination was for all to see as he laid it all out on court against his much more established Turkmenistani opponent, Igor Barzasekov. As he chased every ball down and counter-punched every forehand and serve thrown against him, he proved to be one to watch for the future as he broke down his opponent in three sets to proceed to the semi-finals.

“I’m really happy because this is why i’ve worked so hard and this is the first time i’ve ever reached an ITF event semi-finals” remarked an exhausted Joshua after his match against Igor Barzasekov in the quarter-finals, played under a 35 degree celcius heat.

His feat was not to be repeated however, as he faced off against Kazuya Ikezoi, who was running a hot streak of form in the tournament and was dispatched 2-6 in the semi-finals. Ikezoi was later demolished by top seed and player to beat, Aleksandr Ernepsov 6-2 in the finals.

In the girls’ doubles event, top seeded pair of Ria Vaidya from Singapore and Miyo Kobayashi from Japan were edged out narrowly in the finals by Chinese Taipei’s Cho I-Hsuan and Pai Ya Yun 3-6, 6-3, 10-3 (super tie break).

“I haven’t really been playing since my last tournament because of my shoulder injury and so i’m really happy and how i’ve performed this time round in Singapore” quipped Ria as she gave her thoughts on the tournament after her finals.

For a long time, tennis in Singapore has been under the radar and little do all of us know that training hard at the Kallang Tennis Centre would be a group of elite juniors who have already achieved Junior ITF Ranking points at such a young age, promising a bright future for our tennis scene here. As these players continue to work hard and travel for their tournaments, perhaps it will not be long before we will be able to watch them on the highest stage of professional tennis. 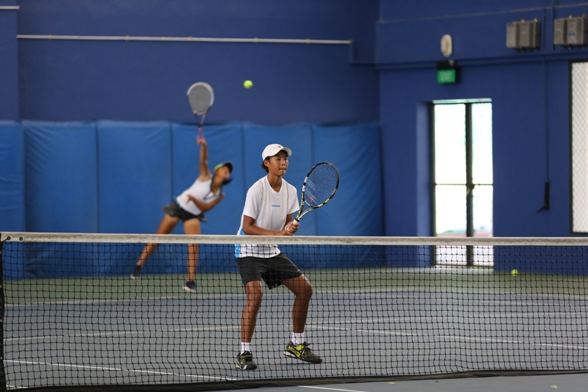