Debunking spinach, one Popeye at a time 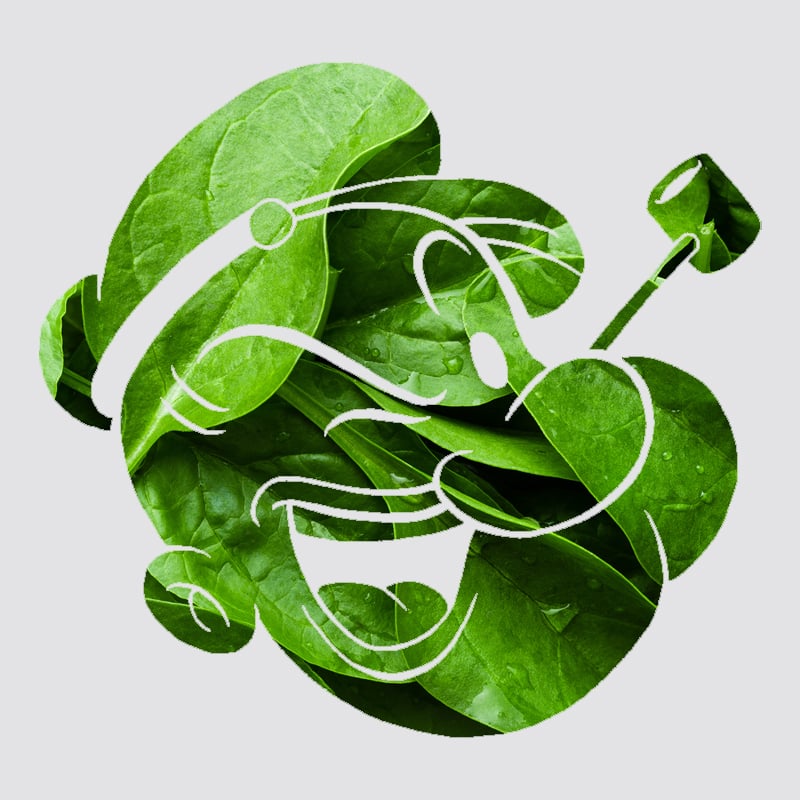 How many of you remember Popeye the sailor man? The trope of eating spinach (straight from a can, mind you) to gain superhuman strength has become a lasting image in pop culture. Spinach was, by all accounts, the OG superfood.

But is the spinach worth that title? Or is the leafy green’s superpowers more fiction than fact? Just how healthy is spinach?

While cartoonishly overexaggerated, the physical transformation that Popeye undergoes after chugging a can of spinach is an iconic image that isn’t too dissimilar to the feats of Superman, just without the heat beams and frost breath.

And it would seem that there is a basis for that reference - Ecdysterone, the main compound found in spinach extracts. Researchers found that those who took ecdysterone saw their performance improve by three times as much as those who did not. Effectively a naturally sourced performance-boosting supplement, the researchers recommended that ecdysterone be included in the doping ban. Cue the “Popeye was right” headlines.

American nutritionist Henry Clapp Sherman claimed that eating plants rather than meat, liver and eggs was the most effective way for us to get iron from natural dietary sources.

As an essential component of haemoglobin,  iron supports muscle metabolism and healthy connective tissue. It is also necessary for physical growth, neurological development, cellular functioning, and synthesis of some hormones.

Have heavy menstrual periods. Women of childbearing age with heavy bleeding during their periods may develop iron-deficiency anaemia because of the excessive blood loss, depleting the body’s iron stores. This may cause fatigue, hair loss and frequent infections.

Kale, another leafy green bestowed with a lot of health hype, only has about 60 percent of spinach’s iron content. Broccoli? Just over a quarter. 100 grams of iceberg lettuce only provides 0.41 milligrams of iron. So, when it comes to leafy vegetables, spinach comfortably reigns supreme in iron content.

Considering the research studies on ecdysterone, you would think that spinach is a superfood that athletes should not live without. However, there is a huge catch. The ecdysterone used in the study came with a serving size of 100 milligrams. In order to get that amount of ecdysterone from spinach, you’d need to eat just over 4 KILOGRAMS of it. Even if you find a way to stomach all those greens, overconsumption of spinach can lead to complications like the formation of kidney stones, or the excessive build-up of bloating, gas, and cramps.

You would think that, since spinach is apparently a good source of dietary iron, Popeye would be wolfing them down for that iron content, right? Wrong! In Popeye’s words, not ours: “Spinach is full of Vitamin A an’ tha’s what makes hoomans strong an’ helty". As E.C. Segar, creator of the beloved character explains, the conception of Popeye came in the days where “so much is being said about vitamins from A to Z (that) spinach seemed to be the logical answer” as the source of his great power.

Myth #3: Spinach is the most effective source of Iron

Our dietary iron occurs as haem (unoxidised state) and non-haem (oxidised) iron. Haem iron can be absorbed fairly easily thanks to the presence of dedicated molecular transporters in our guts to facilitate transportation throughout the body. Non-haem iron is not in the correct molecular form to be transported and so needs conversion into the ferrous form to allow absorption.

Spinach? Almost strictly non-haem. But how does it matter? Well, for leafy vegetables, the bioavailability of dietary iron is at a measly 1.7%. This means that for every 100 grams of spinach you consume, only 0.0459 milligrams of iron is actually absorbed by your body. Meat, on the other hand, has a bioavailability (for iron) between 15 to 35 percent since it is richer in haem iron.

Haem iron is well absorbed and relatively little affected by other foods eaten in the same meal. On the other hand, the absorption of non-haem iron is greatly influenced by meal composition. As such, paying attention to what you are consuming with spinach can help determine if you are improving or worsening iron absorption.

Polyphenols are reducing agents, and together with other dietary reducing agents, such as vitamin C, vitamin E and carotenoids, referred to as antioxidants, protect the body's tissues against oxidative stress and associated pathologies such as cancers, coronary heart disease and inflammation.

Polyphenols are especially high in tea, coffee, cocoa, red wine, and some herb teas. A cup of tea reduced iron absorption from a test meal by 64% and a cup of coffee by 39%. So what is the polyphenol content in spinach? In total, 100 grams of spinach can carry about 250 milligrams of polyphenol!

The inhibitory effect of polyphenols on iron absorption can be counteracted by adding adequate doses of ascorbic acid to the meal. Ascorbic acid facilitates iron absorption by forming a chelate with ferric iron at acid pH that remains soluble at the alkaline pH of the duodenum.

Oranges are very good sources of ascorbic acid: 150 g can deliver 120% of a required daily amount. Therefore, with respect to the habits of people taking a drink sometime around eating, tea significantly reduces uptake of dietary iron, whereas orange juice maximises absorption.

If you go by the broad strokes, then yes, spinach is a good source of nutrients (even if it is non-haem iron), plus a lot of other nutrients like Vitamins A, E, and K. But it is definitely not as “super” as popular media would like you to believe - meat has vegetables comfortably beaten in iron content. If caloric/fat intake is the least of your concerns, or if you are looking to put on weight, then even dark chocolate (that is high in cacao content) can be a valuable, if not better alternative! That said, you should still eat your daily recommended servings of greens!