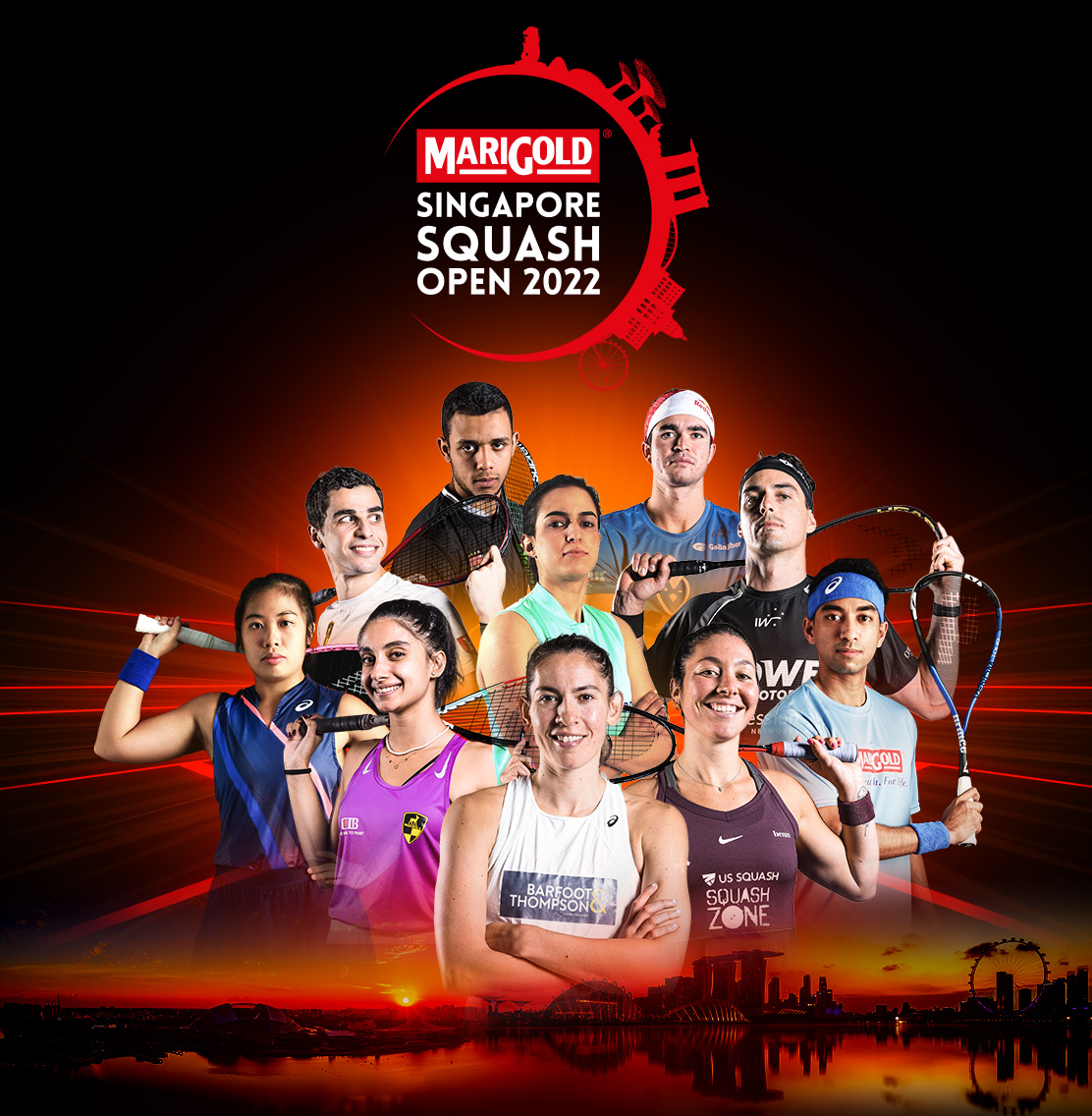 Men’s world No. 1 squash player Paul Coll and American star Amanda Sobhy will lead the field at next month’s MARIGOLD Singapore Squash Open, the first-ever Professional Squash Association (PSA) World Tour Gold event to be held in Singapore and the first event of this scale in Southeast Asia. Organisers unveiled the entry list and draw on Friday (14 October), as well as a preview of the activities that the public can enjoy during the event, which takes place from 15-20 November.

The US$220,000 MARIGOLD Singapore Squash Open will see the prize purse split equally between the male and female players. And the week-long tournament is set to be a gathering of the world’s best squash players, featuring top professional squash players in the world such as Ali Farag, Amanda Sohby, Mostafa Asal, Nour El Tayeb and many more. The event is organised by the Singapore Squash Rackets Association (SSRA), and is the first major international squash competition to be held here in 10 years.

The men’s and women’s singles draws each comprise 24 players, who will battle it out over five rounds of play at the Kallang Squash Centre and OCBC Arena. Reigning Commonwealth Games gold medallist and two-time British Open champion Coll this year became the first New Zealand man to reach the summit of the squash world rankings, achieving the feat in March. He was overtaken by Egyptian rival Ali Farag in May, but reclaimed the top spot earlier this month. World No. 2 Farag, a three-time world champion, will also be in action in Singapore. Both men are on opposite ends of the draw and have received a first-round bye. Coll opens his campaign against either Ng Eain Yow of Malaysia or Saurav Ghosal of India, while Farag’s first opponent is either Englishman Patrick Rooney or compatriot Omar Mosaad.

Women’s world No. 4 and top seed Amanda Sobhy, who recently won the Oracle NetSuite Open for the third time, is joined in the women’s draw by second seed Joelle King of New Zealand and third seed Nour El Tayeb of Egypt, ranked 5th and 6th respectively. El Tayeb is continuing her strong comeback a year after giving birth to her daughter Farida in July 2021 – the former world No. 3, who is married to Farag, returned to competition in December 2021 and has since re-entered the top 10.

The MARIGOLD Singapore Squash Open will also feature two local wildcards. Au Yeong Wai Yhann will take on Hollie Naughton in the women’s event, while Samuel Kang will do battle with German No.1 Raphael Kandra in the men’s draw. The draw is available at Annex A.

The action from the MARIGOLD Singapore Squash Open will be on display at the OCBC Arena: an iconic all-glass show court specially built for the tournament will feature exciting matches and incredible athleticism. Some of the fixtures will also be held at the traditional courts of the Kallang Squash Centre, which has the only seven tournament-grade courts in Singapore. The Kallang Squash Centre is an iconic venue much beloved by the local squash fraternity but will be making way for the Kallang Alive project in the near future. The Centre was the training ground of Singapore squash legends such as Asian champions Zainal Abidin and Mah Li Lian. It also hosted key international events including the Southeast Asian Games and the Men’s World Team Championship in 1989, where Singapore placed 9th, maintaining their top-10 position after finishing 6th at the 1985 edition – their best result to date.

Off the court, the public can participate in activities that introduce squash to those who may not be familiar with the sport. This is part of SSRA’s efforts to make squash fun, accessible and enjoyable for people of all ages and abilities. One of the activities available for the public to try is mixed reality squash, which integrates the sport with digital technology and gamification. This provides an immersive experience for squash to be enjoyed in different ways, from fast paced action games to relaxing sensory play. It will be made available for the public at Hall 1, OCBC Arena, during the tournament.

SSRA has also collaborated with artists Glacy Soh, Chan Yoke Ying and Leong Yiat Teng to create art pieces featuring Splash Paint Squash, an initiative by SSRA to bring different worlds and people together to build an inclusive community - sport and art, squash players and non-squash players, artists and non-artists. The campaign involved SSRA coaches introducing participants to the basics of squash, before participants progressed to splashing paint using squash rackets and balls to create an inclusive community art mural. The mural was unveiled on Friday (14 October), in celebration of World Squash Day on 15 October.

Singapore Squash Rackets Association President Patrick Thio said: “An event of this stature is a boost to the local squash community and to the wider Singapore population, especially with the top-ranked players competing here alongside our local athletes. In addition to the thrilling displays of squash, there will also be clinics and opportunities for interaction with these athletes. We hope the action on and off the court will be a source of inspiration to our young squash athletes in their pursuit of sporting excellence. Beyond the court, we’ve also planned for a series of exciting activities and programmes in the fan zone and the “non-fan zone” specially catered to those who don’t know the sport well or who are not fans of squash – yet. With the partnership with Digital Dream, we are able to use technology to further interest the younger generation. These are engaging and fun activities that everyone can enjoy, and we’re looking forward to introducing squash to more people in Singapore.”

Team Singapore athlete and five-time National Champion Au Yeong Wai Yhann said: “The major tournaments that we’ve competed in have mostly been held overseas, and it’s rare that we get to play at such a high-level event on home soil. The MARIGOLD Singapore Squash Open will be a very special experience, and not only because our friends and family can be present to watch us play. It also creates an opportunity for those in Singapore to come and learn more about squash and what an exciting sport it is, and it gives them a glimpse of what we train for as national athletes: the chance to compete at the top levels of our sport. We’re working hard so that we can give our best performance next month, and we can’t wait to play in front of the home crowd again.” 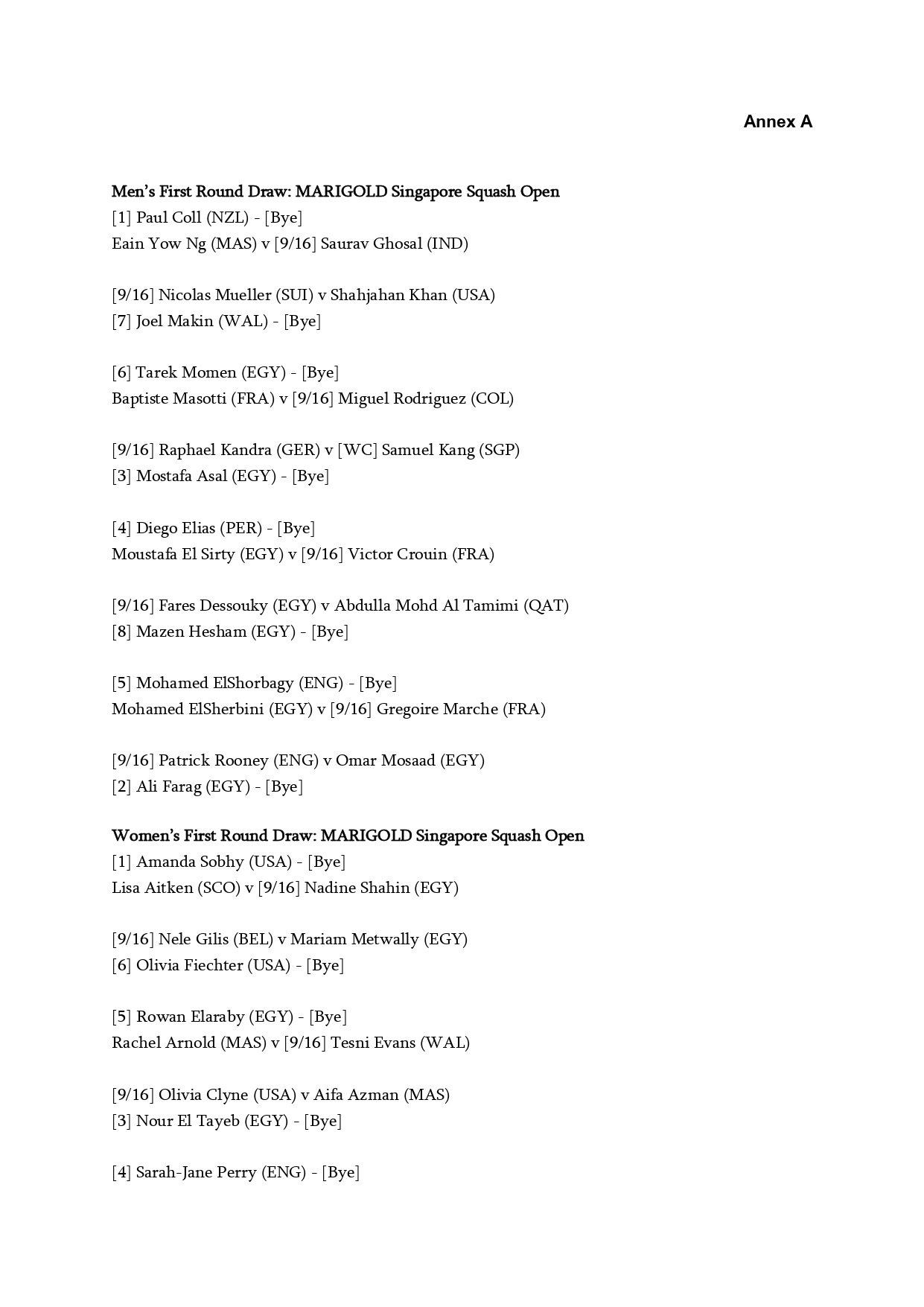