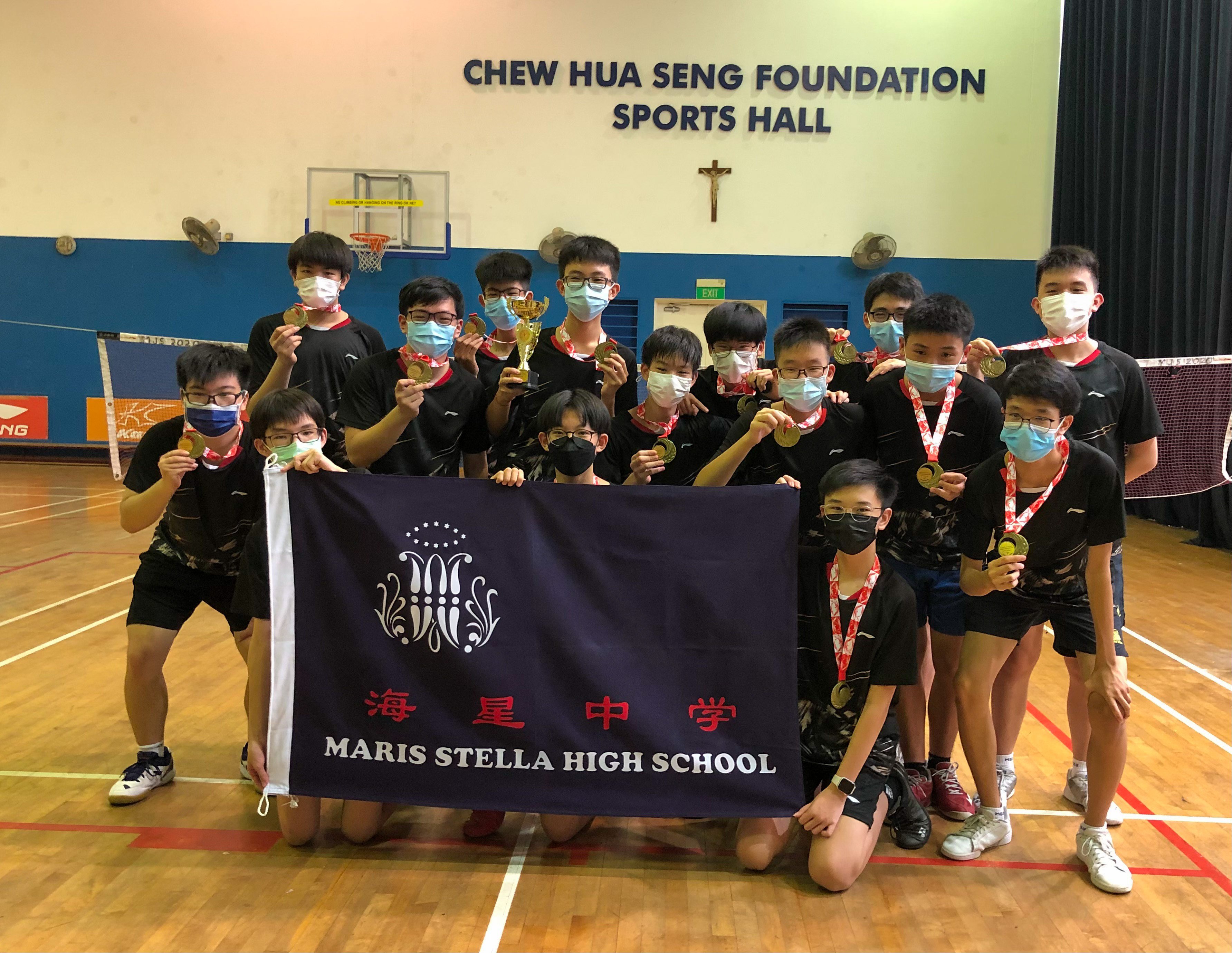 Maris Stella High School (Secondary) are kingpins of the North Zone B Division Boys’ Badminton Championships for a 2nd successive year – this after edging Bowen Secondary School 3-2 in the grand final played at Montfort Secondary School on Wednesday (27 April) afternoon. 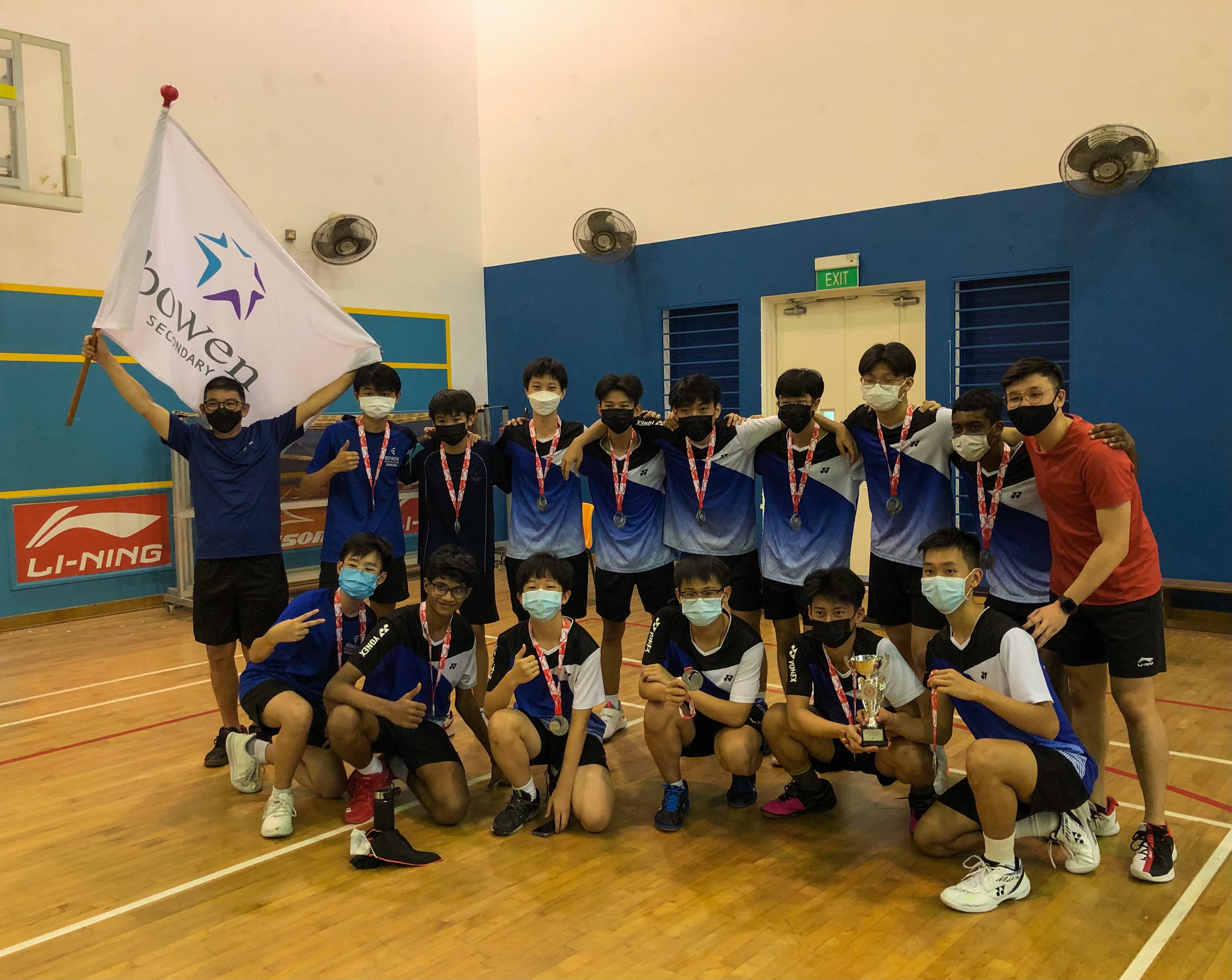 (Bowen’s shuttlers pose with their runners-up medals after putting up a great fight in the final. Photo Credit: Kenneth Tan)

With student supporters now allowed physically at the venue for semi-finals and finals of National School Games (NSG) sports competitions, the match was played out in front of a boisterous crowd that perhaps brought the level of competitiveness up at least a notch. 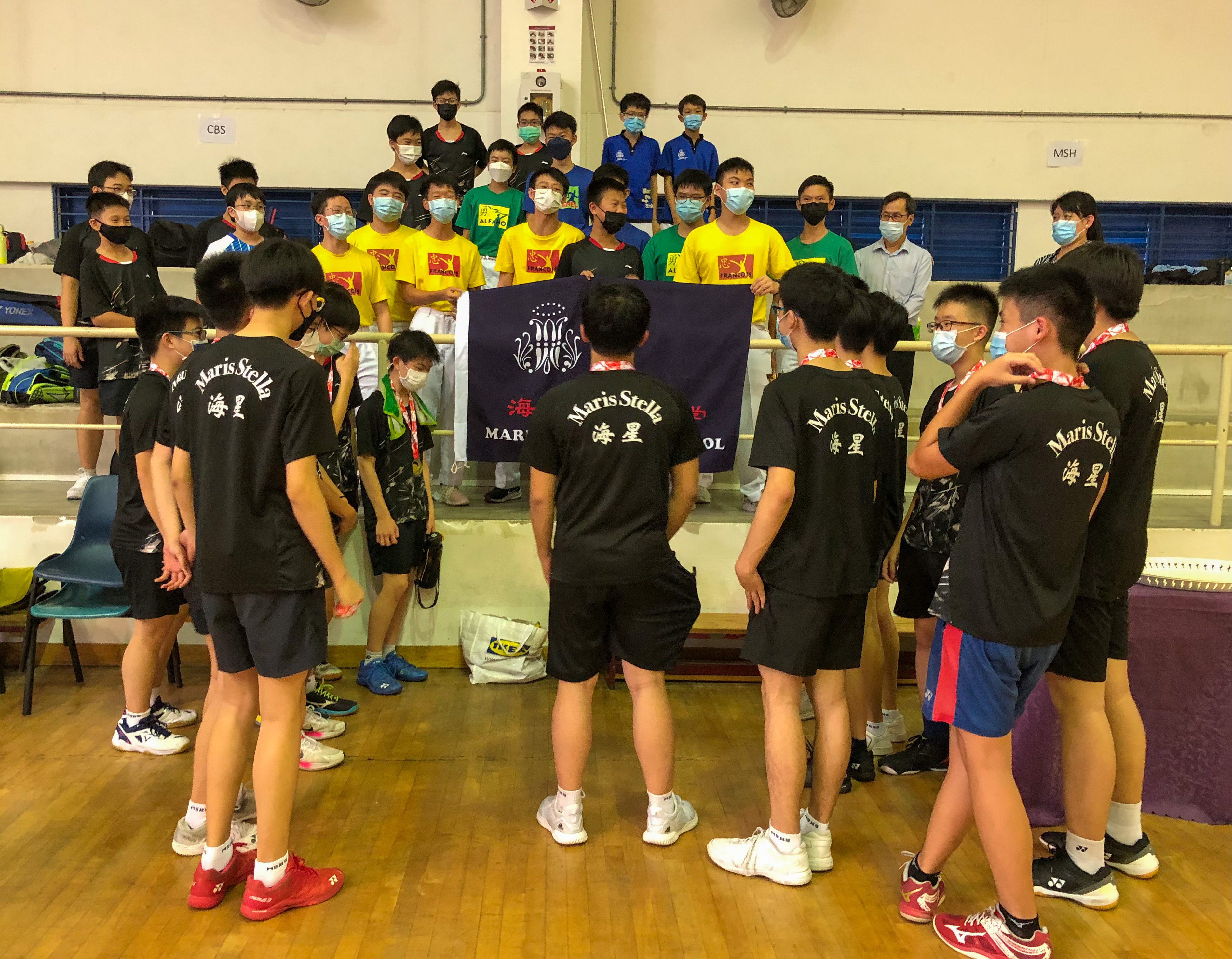 Maris Stella started out strong in the first singles, with Zenden Yeo quickly pulling 10-0 ahead before sealing the first set 21-10. Bowen’s Ryan Leong tried hard to come back in the second set, but there was little answer to the former’s powerful and well-placed forehand smashes as he lost 13-21 to hand Maris Stella the initiative in the best-of-fives.

(Maris Stella’s student supporters in full voice to give their friends a boost from the stands. Photo Credit: Kenneth Tan)

Bowen, seeking their first North Zone win since 2015, was determined not to let this slip away in the subsequent first doubles with Yang Jun Ran and Hu Weicheng turning it on to lead 11-6 in the first set. Maris Stella’s Glenn Tan and Wong Hon Joon roared back to take the lead for the first time at 17-16 and the temperature was rising, with both sets of players warned by the umpire for an excessive show of emotions. Eventually, it was the Bowen duo who turned it around to prevail 21-18. 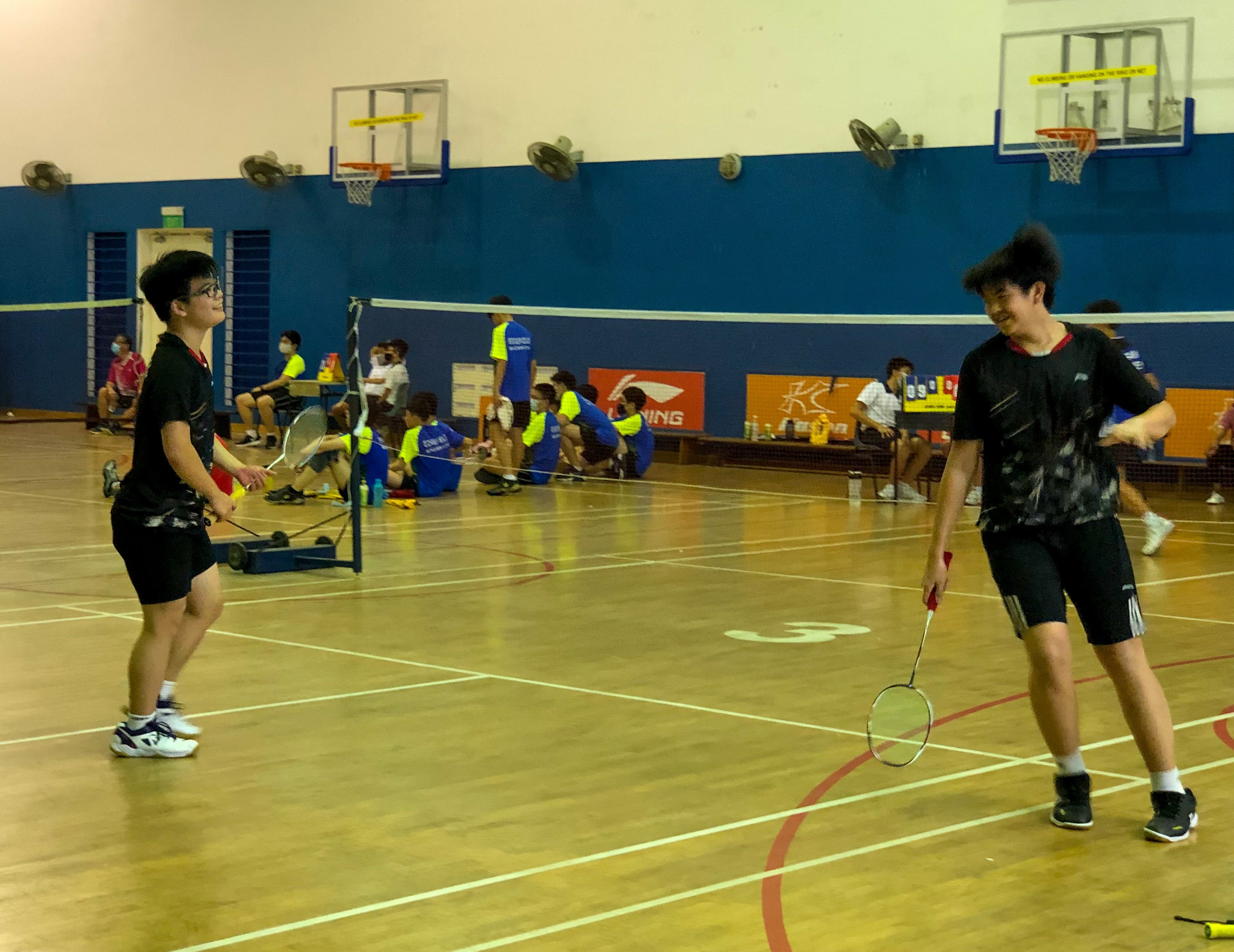 (Matthew Cheong and Jaydren Hu were on song as they sealed Maris Stella’s victory comfortably in the second doubles. Photo Credit: Kenneth Tan)

It continued to be a fiercely-contested battle with countless rallies in the second set, with Maris Stella scoring 5 straight points to pull level at 15-15. Bowen’s Jun Ran and Weicheng held their nerve and won the battle of minds though, as they won 21-18 again to pull their school level on the overall score. 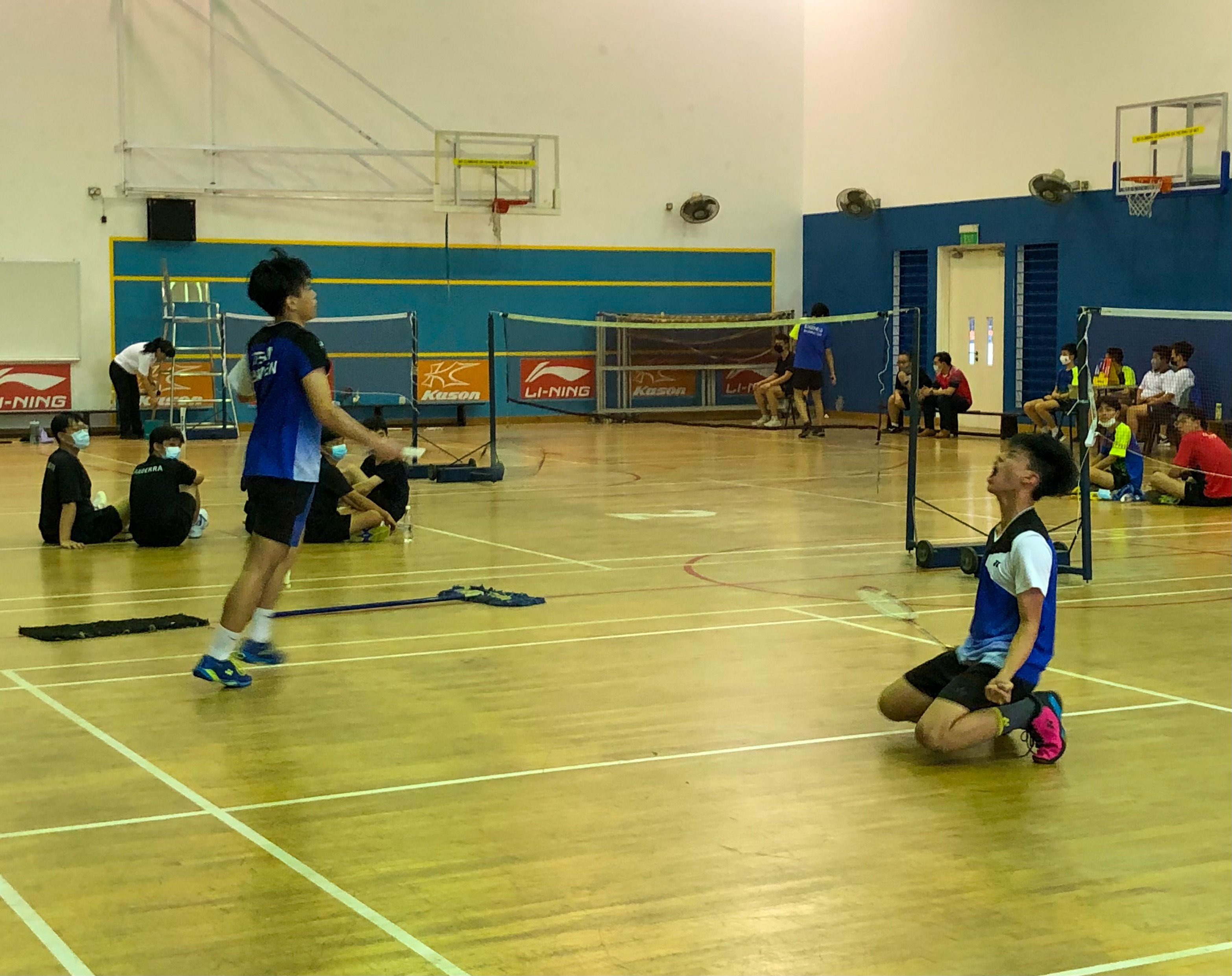 Bowen carried that momentum going into the 2nd singles, with Ethan Chan fighting back from 14-11 down to win 21-19 in the first set. It continued to be a tight contest in the 2nd set with both sets of players locked at 16-16, before Maris Stella’s Jayden Ng found form to win 21-18 and restore parity. In the all-important 3rd set, the latter trailed 11-9 but netted 8 straight points to pull ahead before clinching it 21-16 to swing the pendulum towards Maris Stella.

The victory was then sealed in the 2nd doubles, with Maris Stella’s Matthew Cheong and Jaydren Hu proving too powerful with their combination play and clinical smashes as they won 10 straight points en route to winning the first set 21-5. Bowen’s Xavier Goh and Xavier Tay did better in the second set, but there was no stopping their opponents from winning it 21-10 to give Maris Stella an unassailable 3-1 lead.

Bowen did at least end the campaign on a high, with Muthu Vinayagam Sai Sankar defeating Maris Stella counterpart Julian Chong 21-15, 21-13 in the immaterial third singles and there was plenty of positives for them to take away as they surpassed last year’s fourth-placed finish.