23 May 2022 - Singapore’s title defence of the Women's Asia Oceania Floorball Confederation Cup (Women's AOFC Cup) kicked off with a 4-0 win against their compatriots from the Under-19 team at the OCBC Arena on Monday (23 May).

The match was tightly contested with nothing to separate both sides after the first period. But Singapore’s breakthrough came in the second period with Ong Hui Hui slotting one into the bottom right corner of the net. The next goal came through Ong Swee Ling, who fired home from close range after a pass from behind the goal found her in the middle. Singapore’s Player of the Match Siti Nurhaliza Khairul Anuar then produced a moment of individual magic dribbling past the Singapore U-19’s defence, tricking the opposition’s goalkeeper and scoring in the far corner of the net to make it 3-0. Yee Yun Shawn extended her team’s lead just two minutes later to wrap the game up for the senior Singapore team.

23-year-old Siti Nurhaliza said: “Moving forward, we just have to stick to the game plans given by our coach. I think we played really well today. However, we could have taken more shots and got more shots on target and to place the shots well. The teams will definitely not be easy to beat as the tournament progresses, so moving forward, I would like to see more discipline in our defence and also to have a more stable offense.”

The Opening Ceremony of the Women’s AOFC Cup was attended by Guest-of-Honour Ms. Low Yen Ling, Minister of State for Culture, Community and Youth & Trade and Industry. (The Indonesians, attired in red and white, take on the Filipinas. Photo Credit : Singapore Floorball Series)

Earlier in the day, the opening match of the event saw the Philippines comfortably defeating Indonesia 9-0, controlling the tempo of the match straight from kick off. Ruiz Roxanne opened the scoring in the first 90 seconds after a coolly-placed finish into the bottom left corner of the goal. They then doubled their lead in less than 30 seconds after a simple tap-in from Anderson Loella. There was no looking back for the Filipinas, as they scored three in the second period and another four in the third to wrap up their rout.

The Philippines’ Player of the Match Villegas Dianne, who scored two goals, said: “I think what was good was that we did it as a team. We all worked together, and we all supported each other and we did our best so we could win this game.” 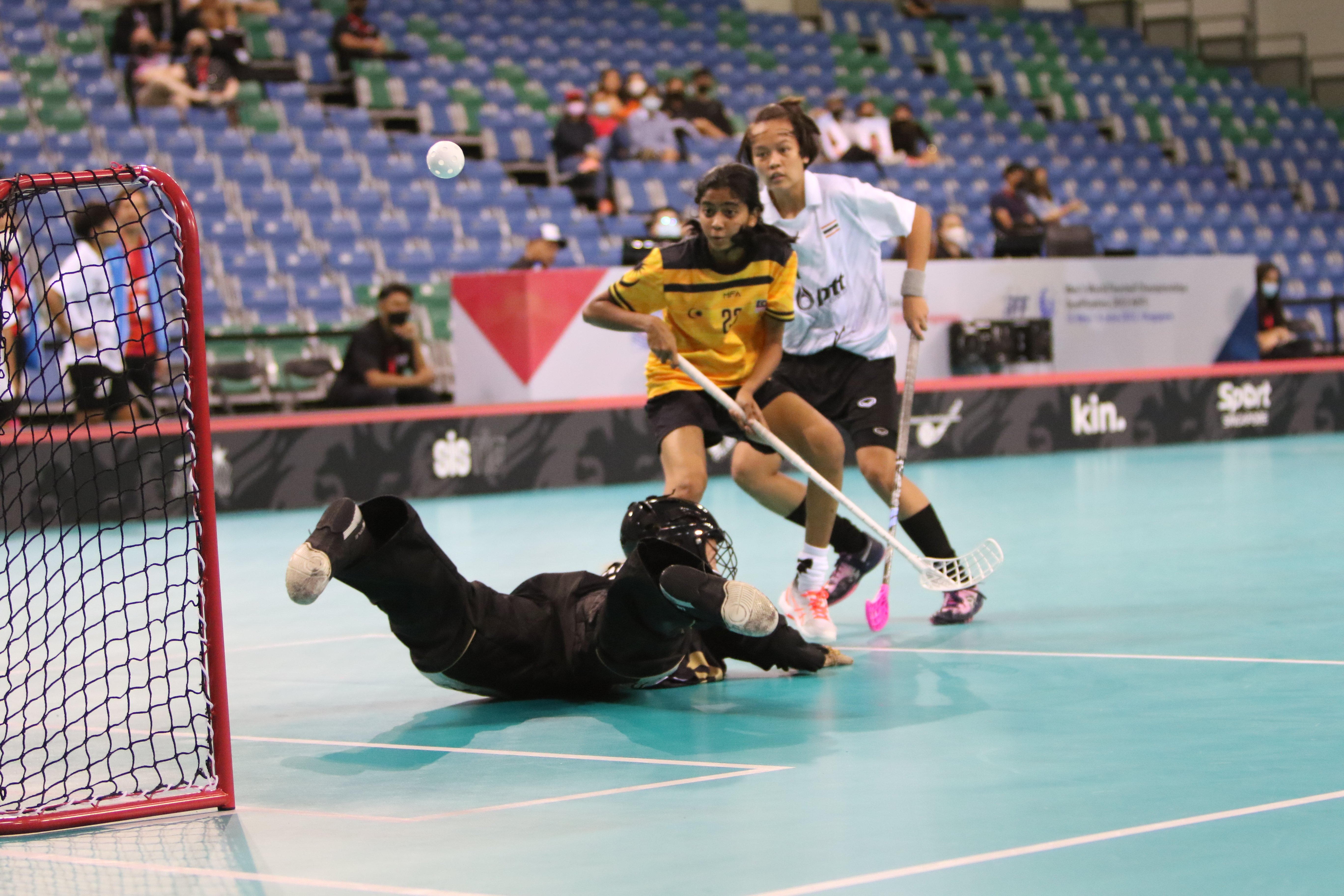 Thailand also secured their first win of the tournament, surviving a scare to prevail 3-2 over Malaysia. Trailing 3-0 after the first two periods, Malaysia nearly mounted a successful comeback with two late goals in the space of a minute in the dying moments of the game.

Malaysia captain Cheah Pei Yi said of her side’s gritty performance: “We were just really trying to chase, so we tried our best and just ran, we ran a lot and we really believed we could make it but time ran out. But we'll just try again next time, because this is a fairly new team and we'll try again in the next game.”

Thailand’s Player of the Match Aliisa Syrjaenen said: “It was a very close match today. So, it means that we have to work harder even though we got the win today. We still have to focus on other matches and keep our focus.”

The action continues on Tuesday, 24 May, with the match schedule as follows: