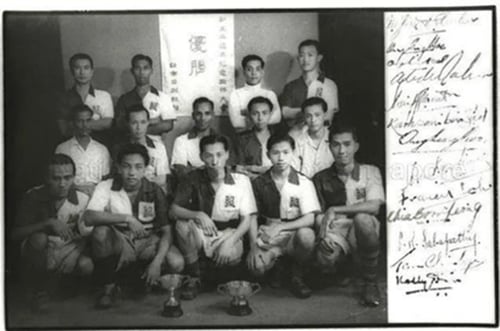 The formation of the Syonan Sports Association (SSA) brought about a series of interactions between Japanese and Singaporeans that would combine power and play.

The key Japanese official was Mamoru Shinozaki, a bespectacled former journalist who had been convicted of spying on Singapore in 1940 before the invasion. He was Chief of the Welfare Department (Koseika-cho) and responsible for delivering the political messages of the senior administrators.

The key Singaporean official was Goh Hood Kiat, known as G H Kiat, a well-respected businessman and sports devotee, who became the Chairman of SSA.

The daily Syonan Shimbun published its first edition five days after the British surrender. Focusing on sporting activity at the end of April 1942, sport was to signal that some form of normalcy was returning to the island.

Members of the pre-war sporting fraternity were instructed by the Sports Editor of the Syonan Shimbun to attend a meeting on the formation of the SSA. Former Committee members of the Football Association, Tennis Association, Hockey Association, and representatives from other sports such as Baseball and Boxing, were the first delegates. 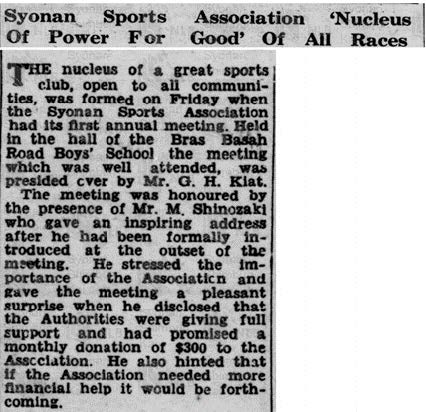 The daily reported that the first AGM of the SSA, open to all communities, was held at Bras Basah Road Boys’ School (St Joseph’s Institution). Source: Syonan Shimbun, 18 October 1942, Page 4. Retrieved from NewspaperSG.

Formation of SSA – Clubs and Associations

The SSA was registered in early September 1942, with Mayor Sigeo Odate as patron and Honorary President. The following clubs were invited to attend the committee meetings:

Sport may be regarded as the true barometer of the mindset of the community. However, there was resistance to the new philosophy amongst Chinese sporting clubs who wanted that sense of independence that had developed with the British. 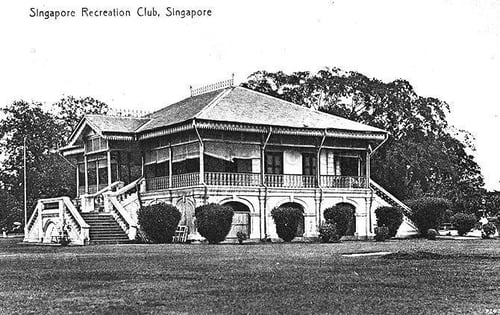 The Singapore Recreation Club was founded in 1883 with 30 Eurasian members. In 1884, a Pavilion was erected on the site of the Padang allocated to the Club. Eurasian athletes became dominant in many sports and team games such as athletics, cricket and hockey. 1920-1928. Source: Courtesy of National Archives of Singapore. (Media - Image No: 19980005093 – 0026)

No sporting club could be formed without the sanction of the SSA. The stated objective was to do away with racial and sectional differences - “emphasising that the people of Syonan are now members of one community as an all-Malayan community and doing away with all the former prejudices and jealousies…”.

“Any friendly rivalry that may exist will be only that to be found between two teams – both belonging to the same parent body – the Syonan Sports Association. This will do more than anything else to build up that close harmony and kindly feeling for each other which is essential to the creation of the spirit of Universal Brotherhood.”

The term Hakko Itiuo or Universal Brotherhood was significant for the Japanese. It implied a spirit of good-fellowship and harmony, such as was displayed during inter-state games in the pre-war period. Communal sport, a British legacy, was viewed as the curse of sports.