TeamSG misses out on a Playoff spot, after a 4-2 loss to Norway at the 2021 World Floorball Championships! 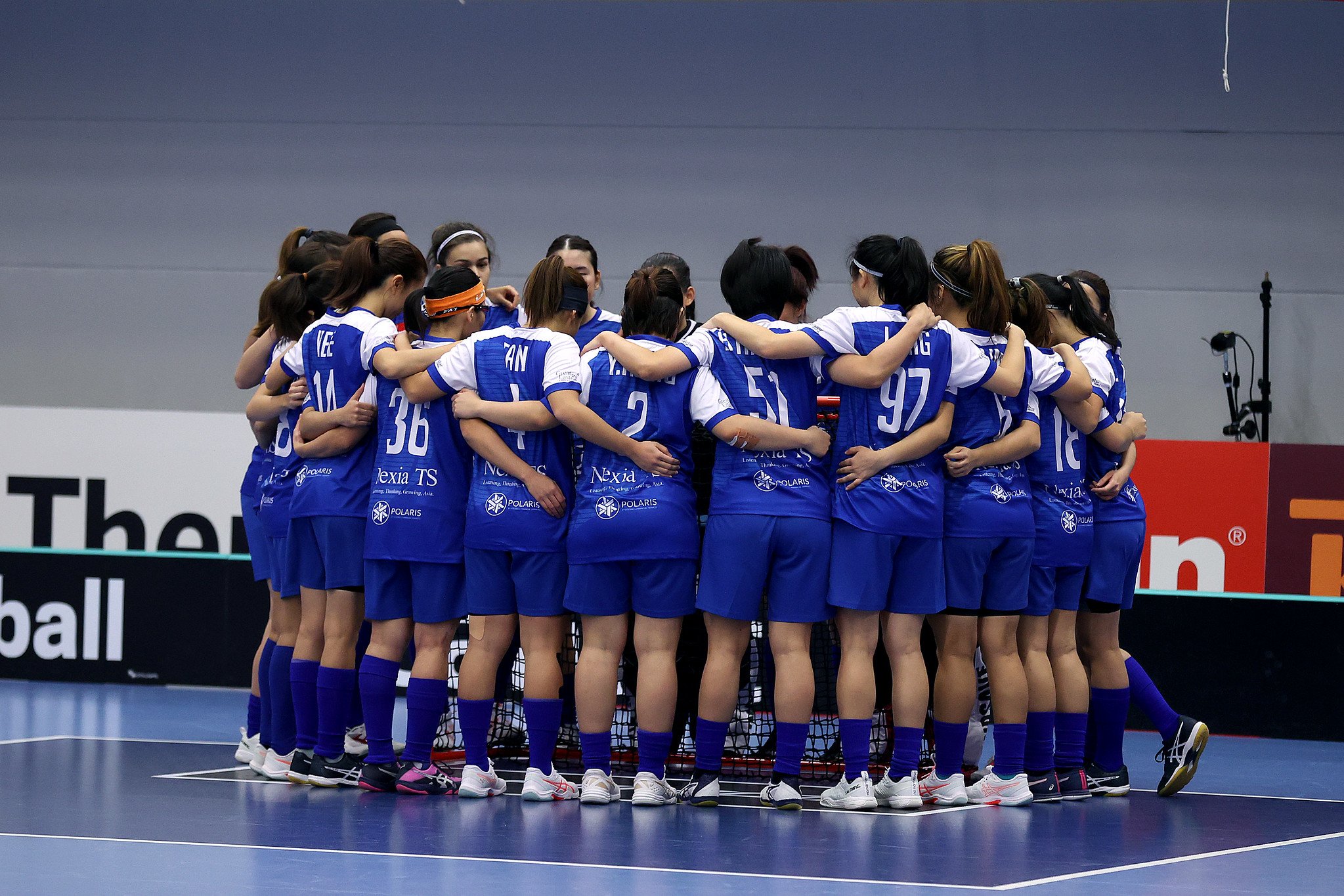 Donning an all-blue kit for the first time, Singapore met the Norwegian team (29 Nov) in their last Group D game at the 13th Women's World Floorball Championships. Norway had already proven to be formidable with their convincing wins against Estonia (11-1) and NFFR (7-3). With a true display of the Majulah spirit, the Singapore team fought bravely, but ultimately succumbed to a 4-2 defeat against Norway. 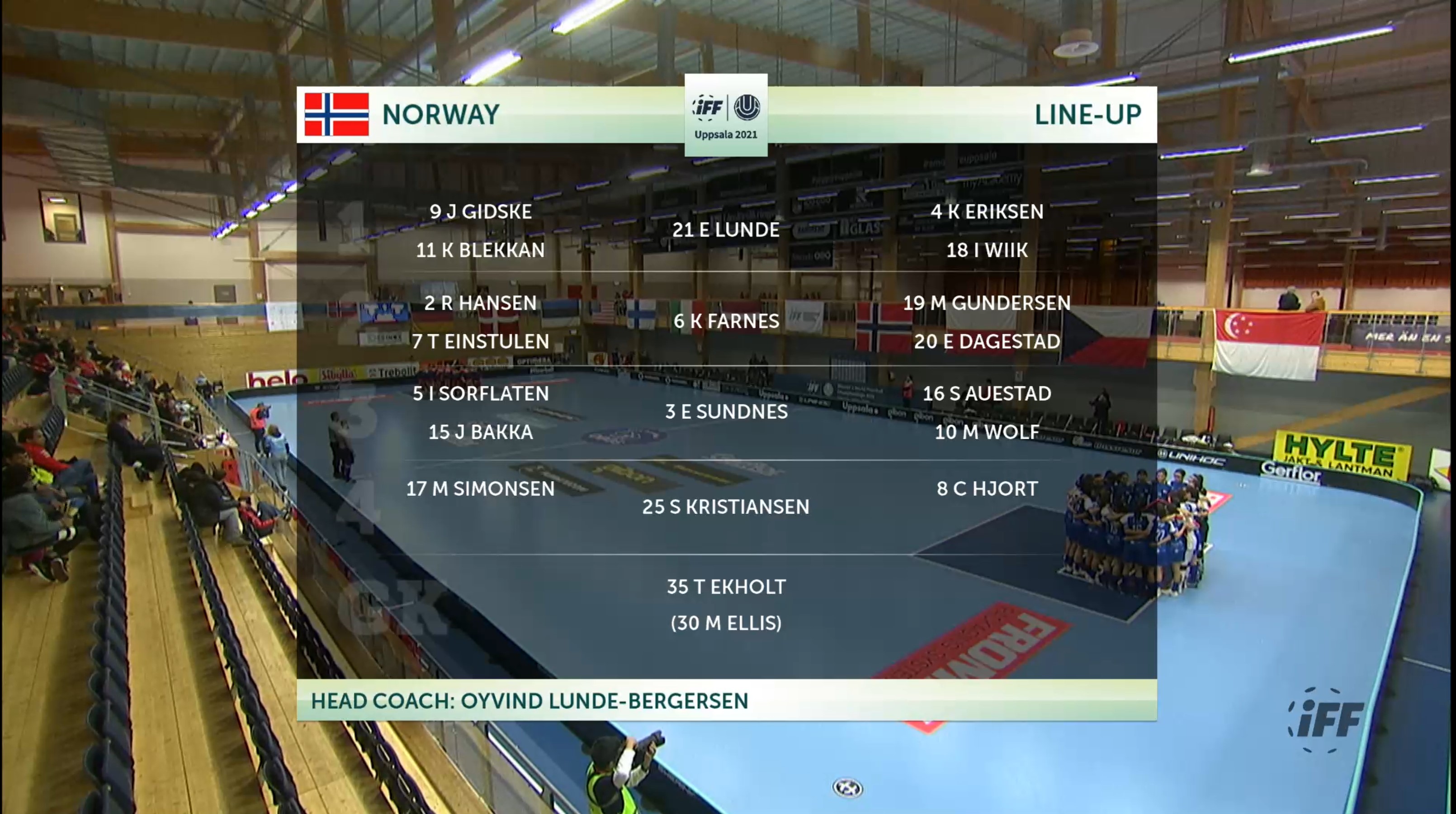 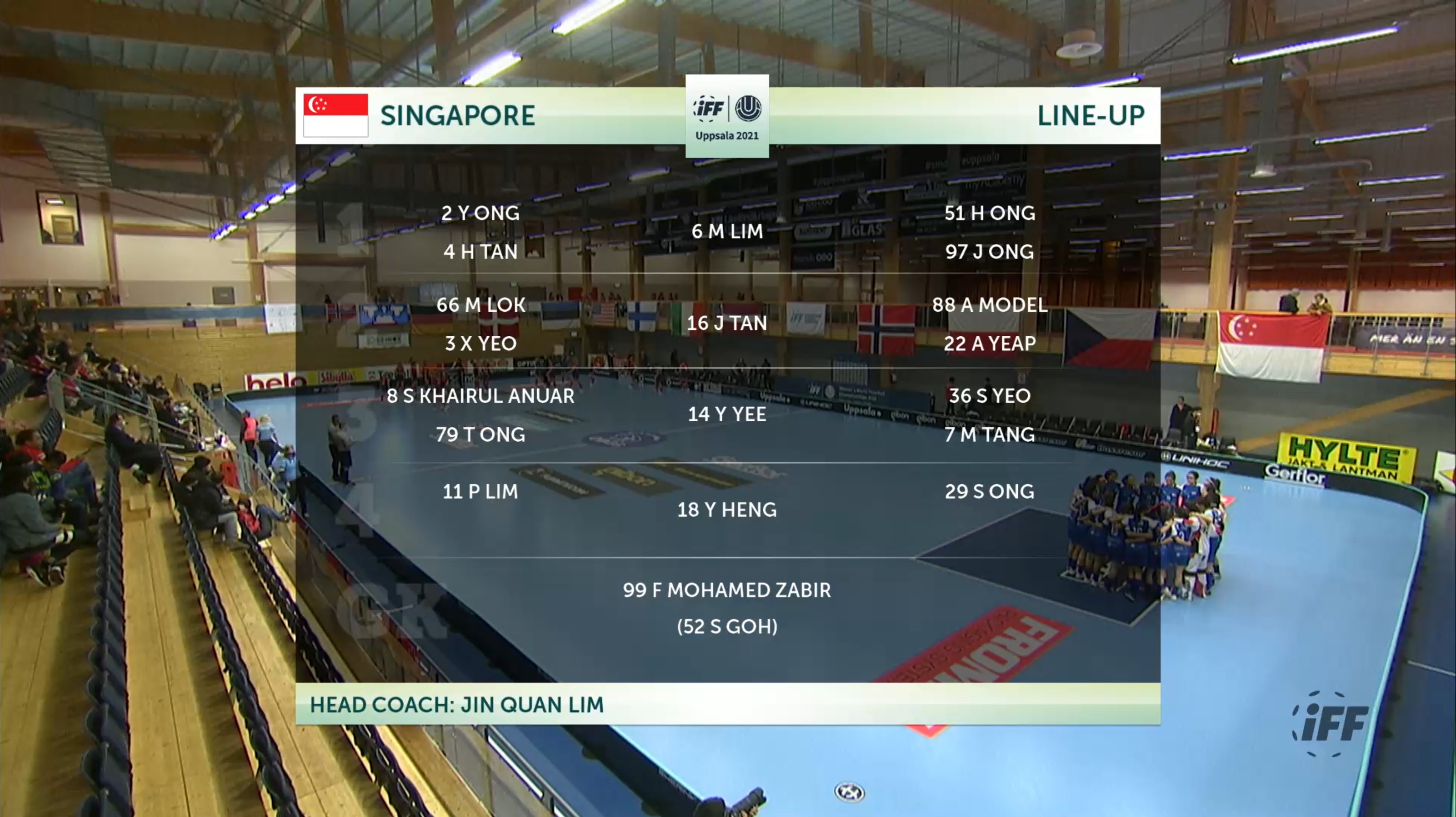 Needing a win to keep their playoff hopes alive, Singapore’s initial strategy of a rock-solid defensive setup, made it difficult for the Norwegian team to encroach upon their goal. With a tight backline, they also applied pressure in their attacking plays and created several good scoring opportunities for themselves. Notably, in the 9th minute, a turn and drag-shot by Jowie Tan hits the crossbar of the goal post. 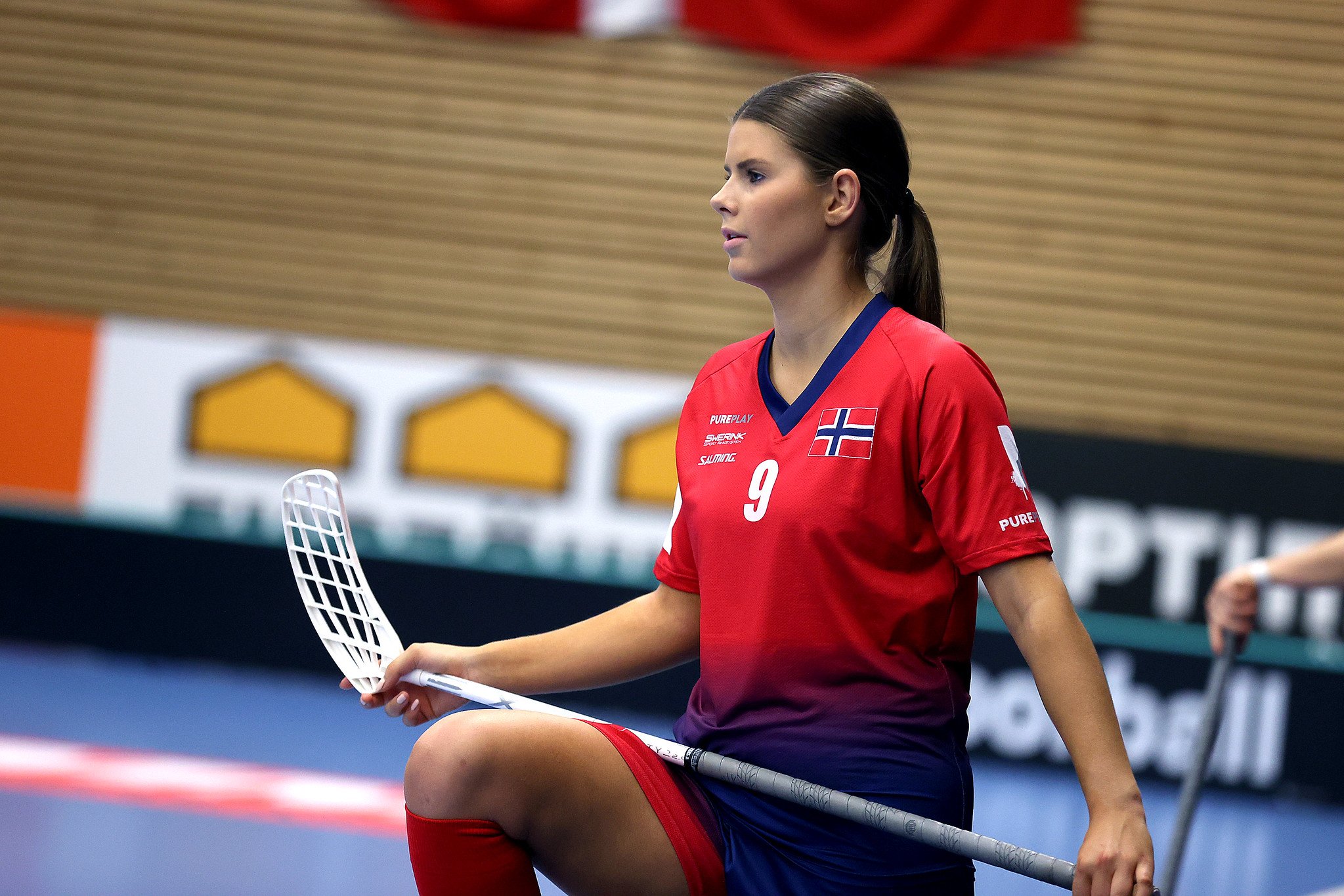 Misfortune though struck 15 minutes into the game for the Republic. A ball-watching mistake by Tan Hui Zhi distracted her from Norway’s Julie Gidske, standing on Fariza Begum’s (Singapore’s goalkeeper) blindside. Gidske receives the ball from Eriksen Kine Hedlund and scores the first goal of the game. 1-nil to Norway! The next 5 minutes moved along quickly with attempts made by both teams, ending the period with the Norwegians up by the solitary goal. 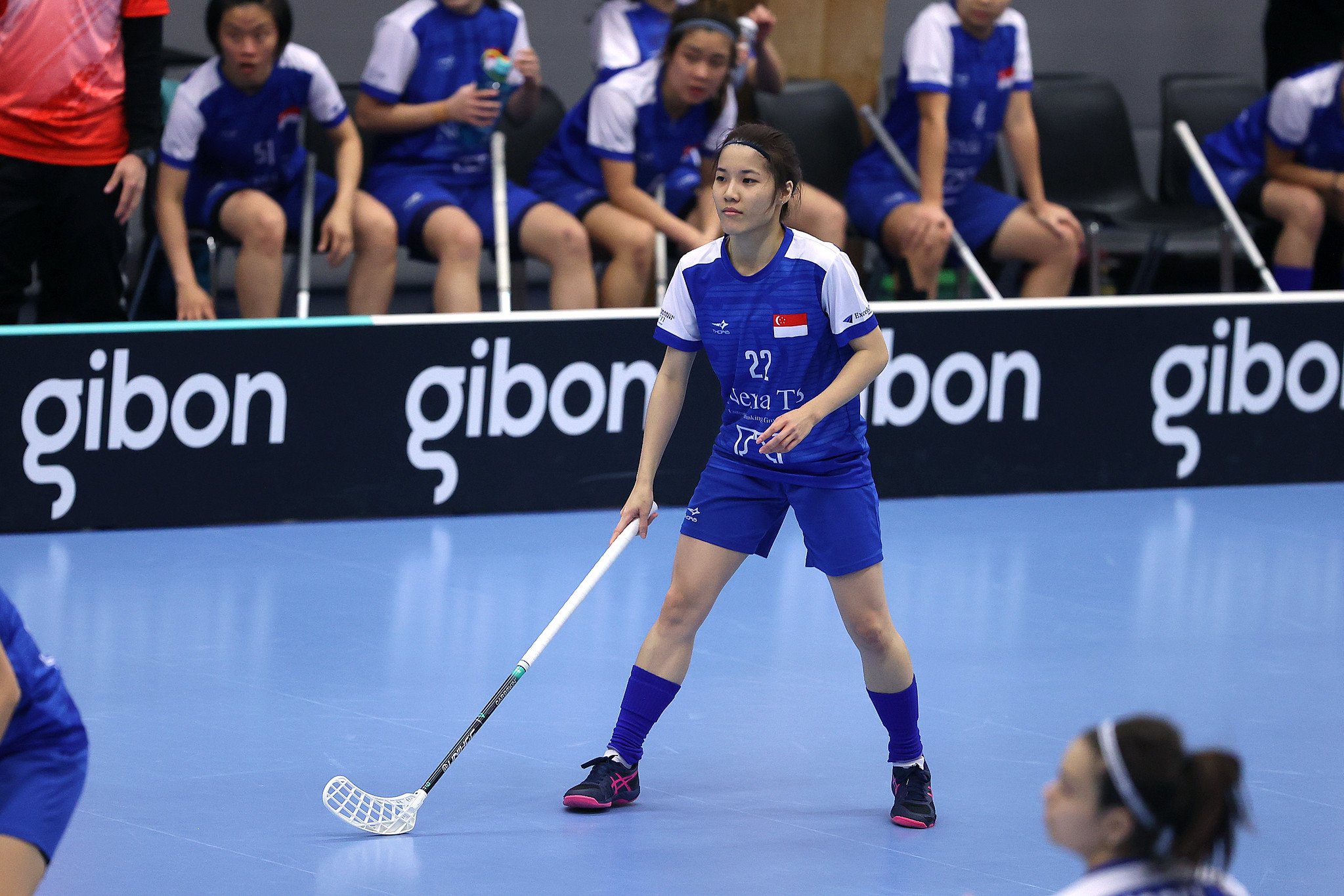 The courage of the Singapore women’s team came roaring through, as they were tested several times in the 2nd period. But the strong defensive tactics held and the team did not budge an inch. 8 minutes in, Singapore was awarded a free-hit in Norway’s half which was swept away by them. And with the Norwegians back in possession, there was a threatening pass about to be made from Julianne Tempelen Bakka to Ingvild Meyer Sorflaten right in front of Singapore’s goal. But an amazing intervention by Amanda Yeap disrupted it, keeping the hopes alive for TeamSG!

13th minute- A push from the back by Norway's Ina Wiik sent Yeo Xuan flying rather precariously. Wiik was promptly penalized and sent to the sin bin to serve out her 2 minutes. Despite having a one-man advantage, Singapore was not able to utilize it to its advantage.

Less than 1 minute left in the second period, Fariza makes her signature long throw to Shannon Yeo who has positioned herself directly in front of the Norwegian keeper. With her great ball-handling skills, she traps the ball and attempts a quick flick of her wrist, to no avail. The score is still at 1-0 at the end of the 2nd period! 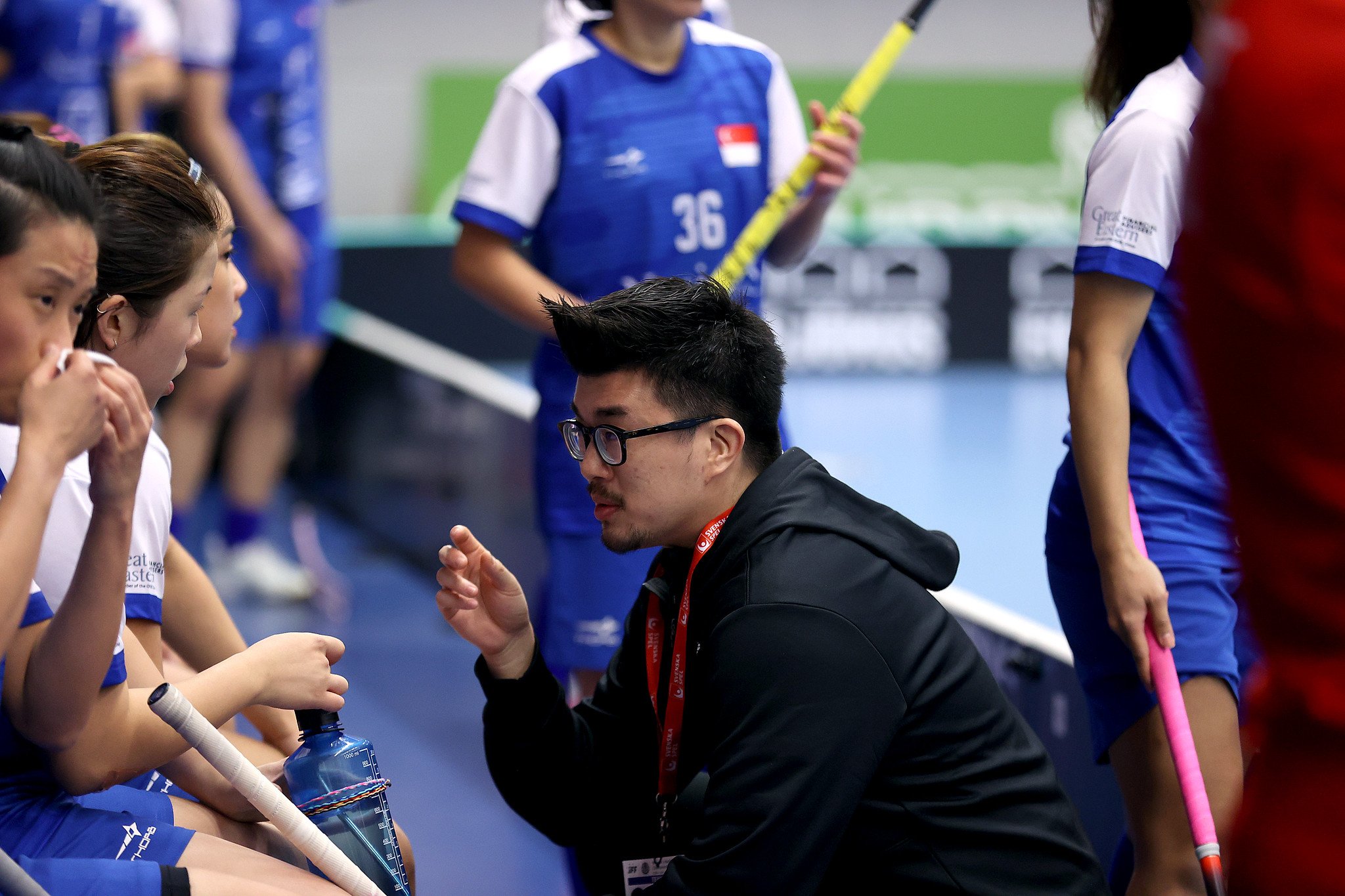 Emotions were running high in the 3rd period as both teams had a player each spending time in the penalty-box within the first 6 minutes. And then midway through the period, just like a mirror image of the first goal, it is now Gidske who sends a cross-court pass to Eriksen, who lurks in the blind side, to score for Norway. 2-0! 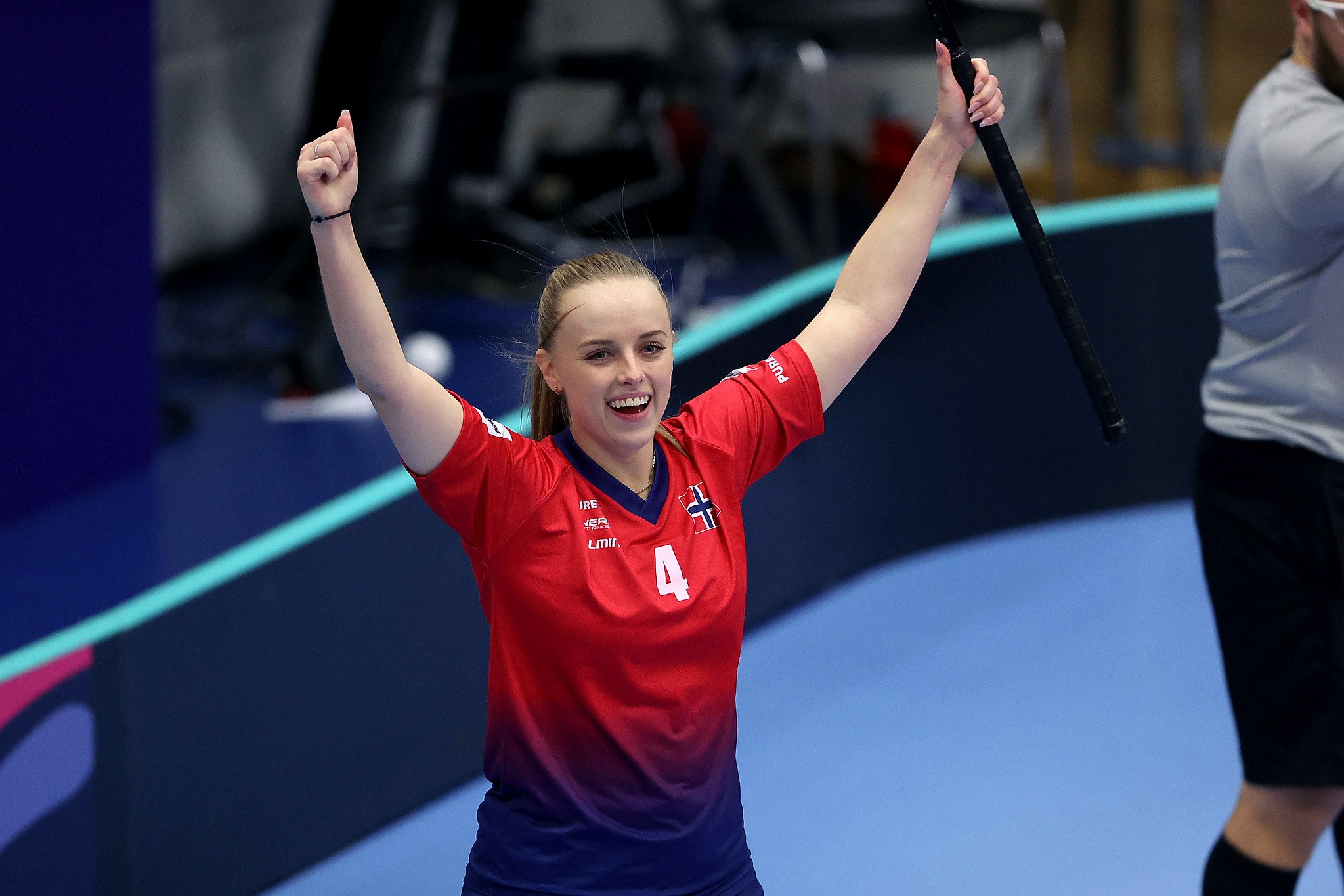 13 minutes in, TeamSG's Shannon Yeo was given a 2-minute penalty - the 4th of the game. And within that two minutes, Sofie Kristiansen sends the ball down the boards to Rikke Ingebrigtsli Hansen who passes it to Tone Einstulen. And the no 7 sends it crashing to the back of the net. Singapore pays dearly for the 1-man disadvantage as the score is now 3-0! 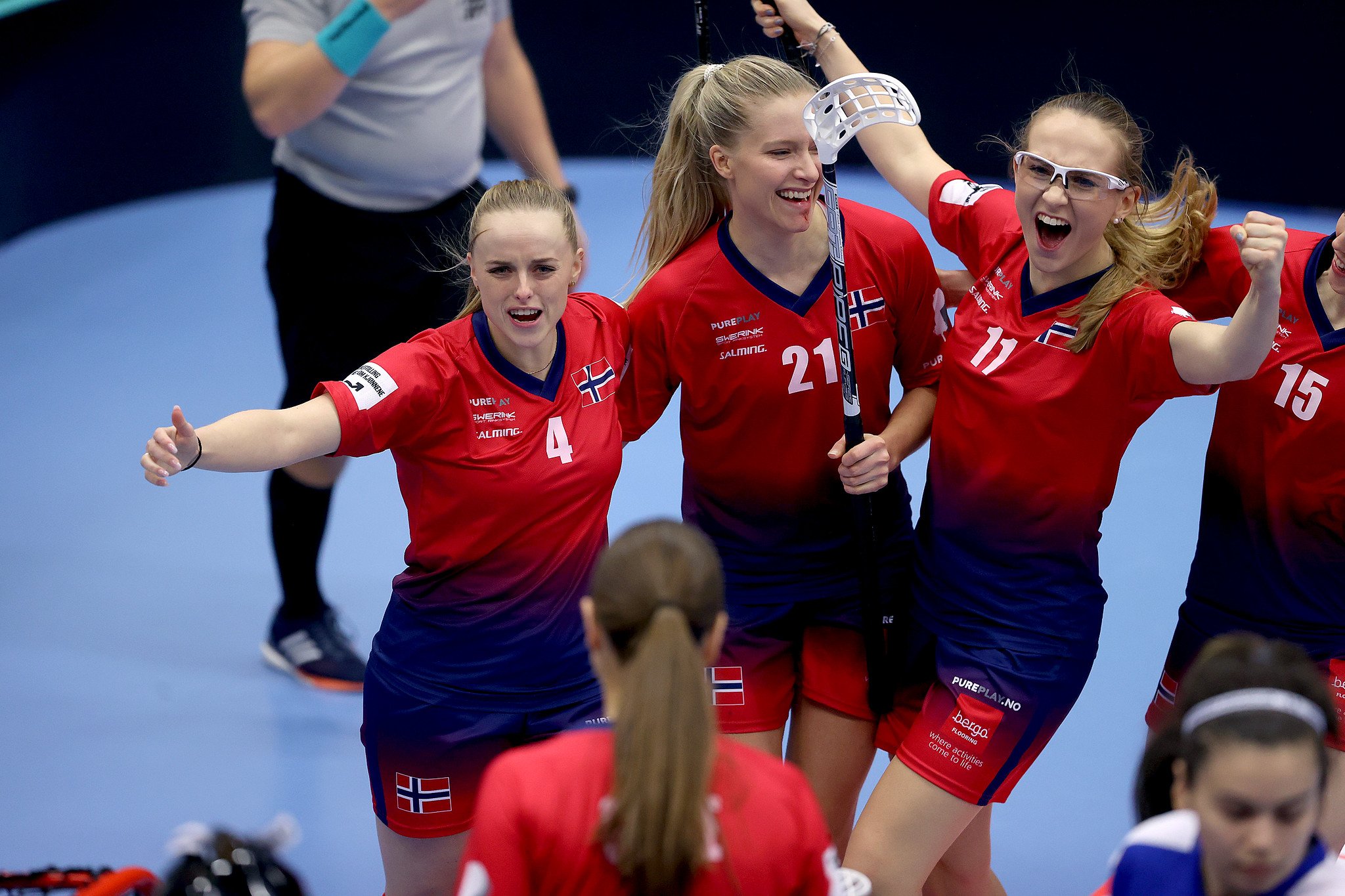 Less than 4 minutes on the clock and with nothing else to lose, Singapore decides to overload on the attack by removing the goalkeeper and adding in an extra player. This strategy doesn’t pay off as Kristiansen seals it for Norway by shooting into the empty net. 0-4!

Setting their despondency aside, Team Singapore regrouped and continued their attacks, giving their all to finally enter the scoresheets. With only 30 seconds left on the clock, Tiffany Ong fires off a wonder shot just after the halfway line, that deflects off the back of Ong Swee Ling and into the net, to make it 4-1! 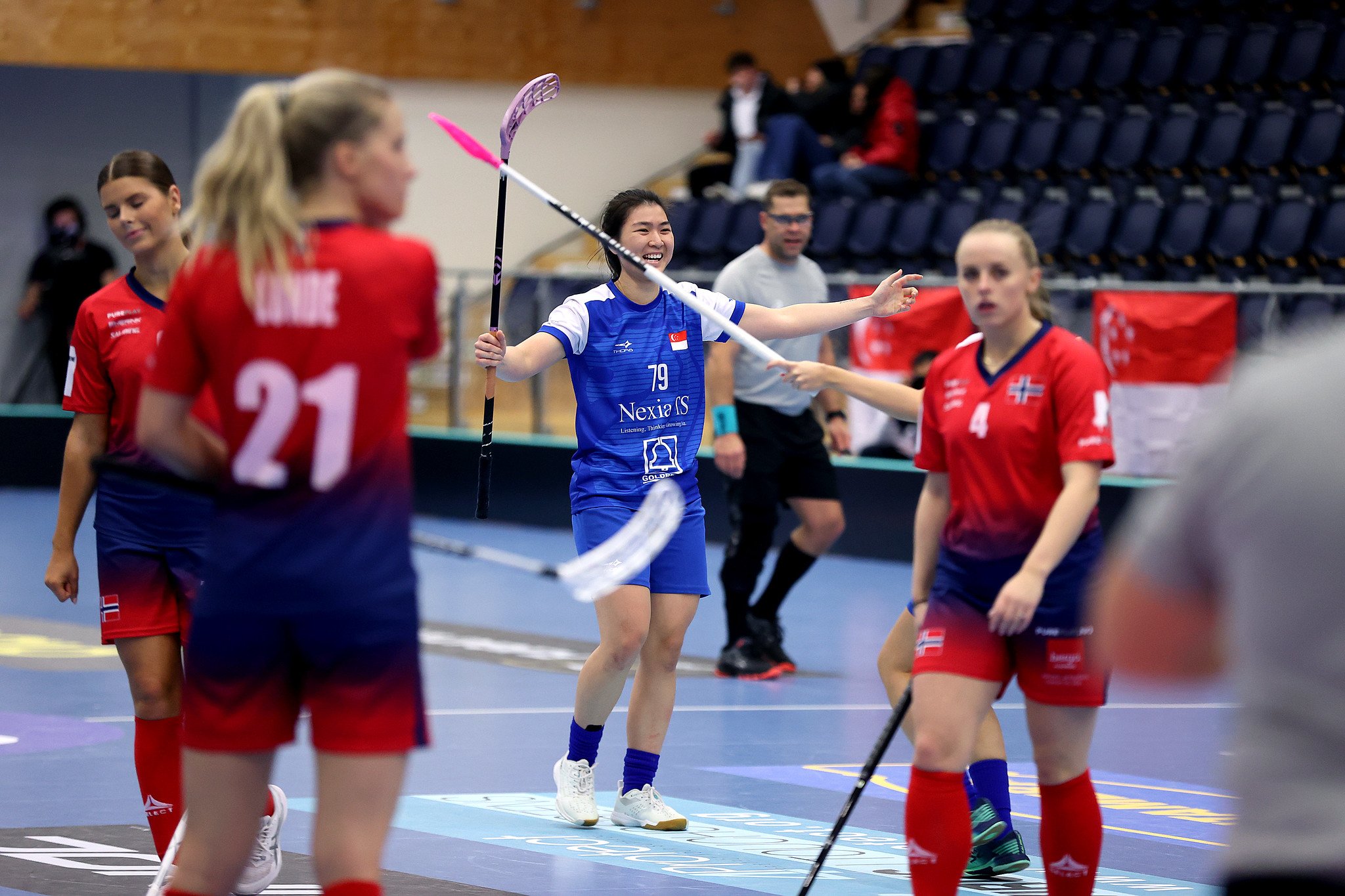 The Clock is ticking!

5 seconds left, Amanda Yeap lobs a long ball to Norway’s half where Siti Nurhaliza gets at it, takes a shot, and scores just as the final buzzer sounds. Unsure if the goal made it before or after the buzzer, the referees take a moment to check, and the goal is all kosher! 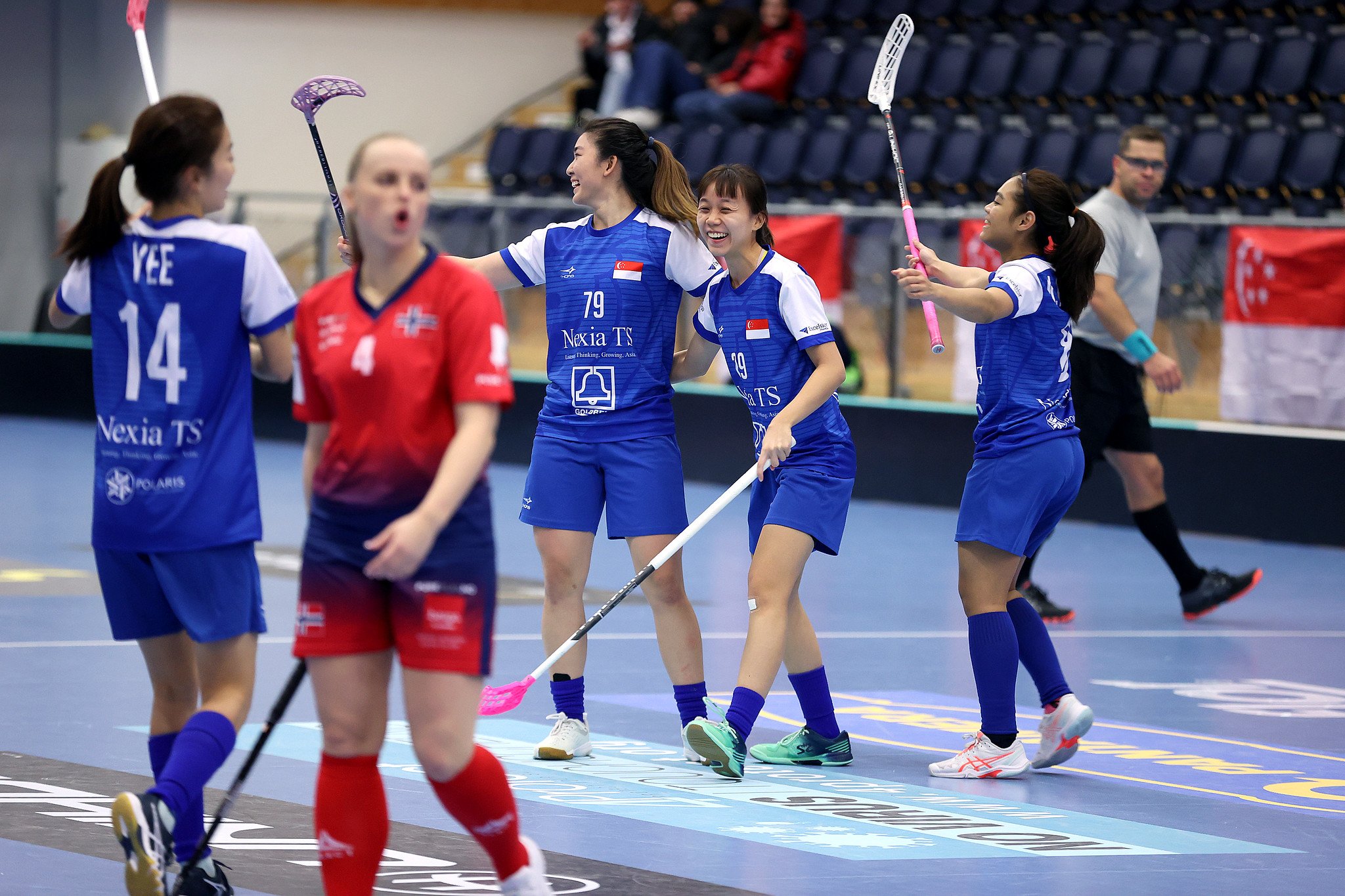 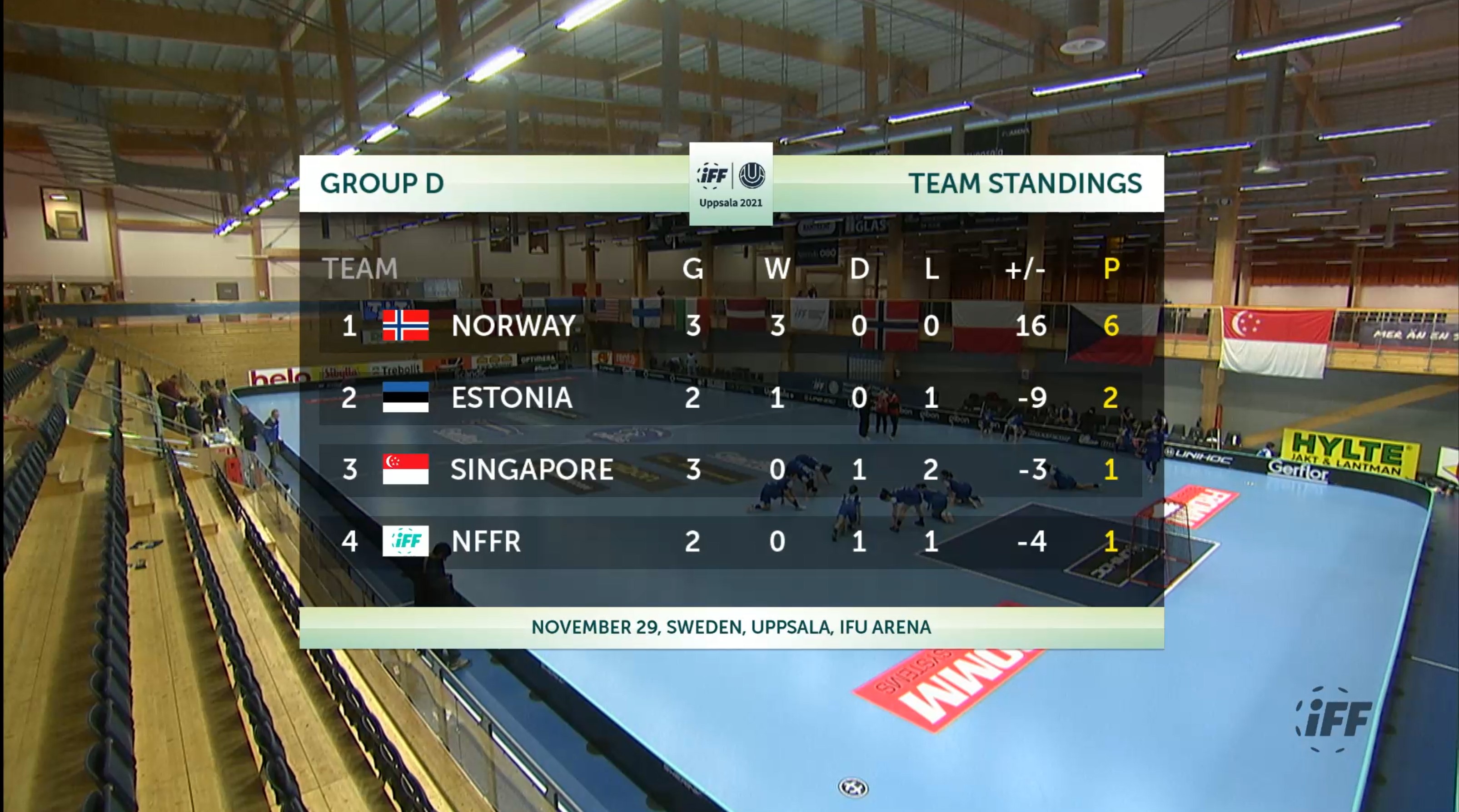 The match ended with the final score at 4-2 to the Norwegians. Despite the defeat, Team Singapore repeatedly displayed their tenacity and perseverance, literally till the last second. And they  now await their next game, as the rest of the group stage matches in the Championship will be completed on 30 Nov.

Singapore's hopes of trying to equal/surpass their 12th place finish at the 2019 campaign, have just fallen short. Their next match will be in the Classification Round for a 13th to 16th place finish. 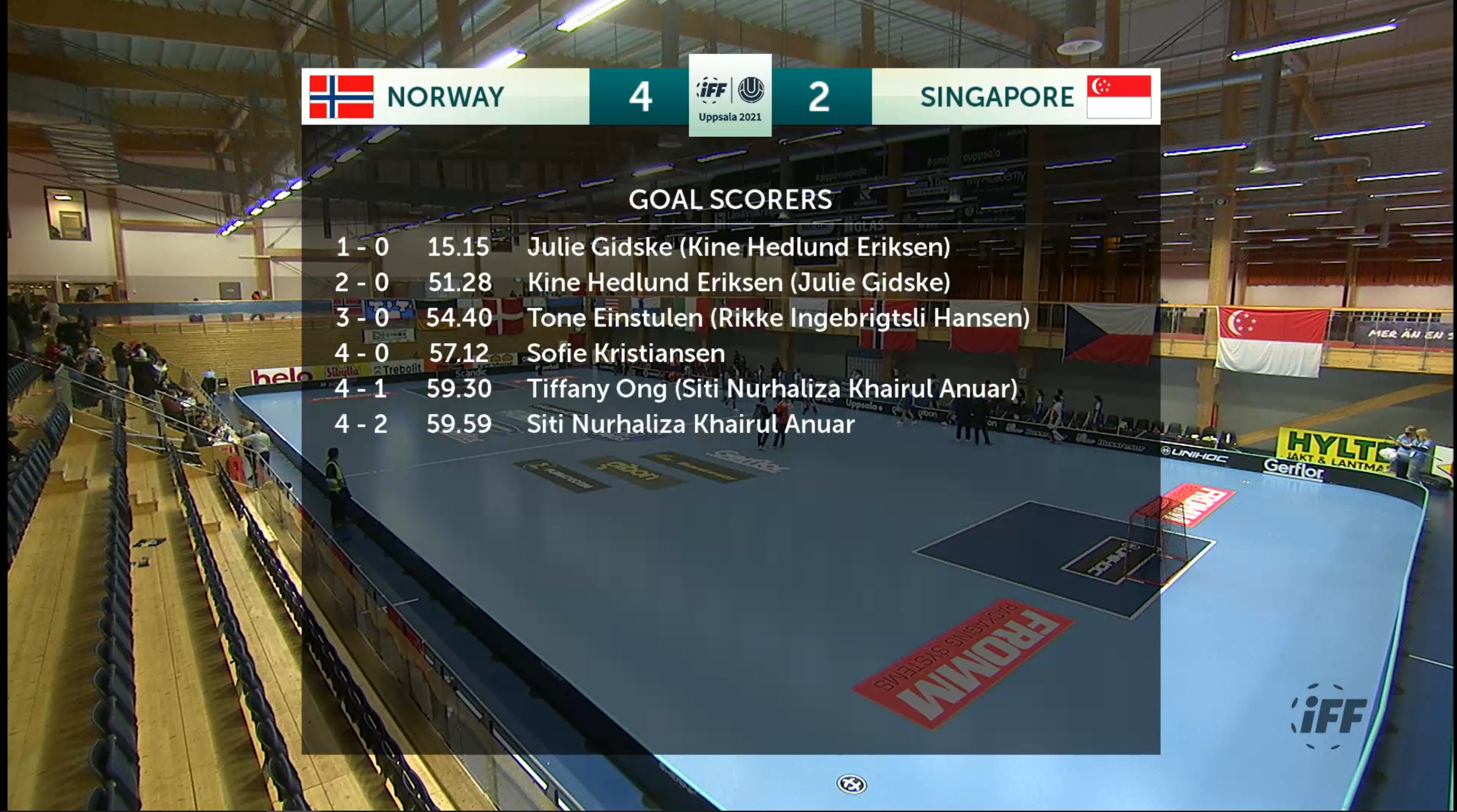 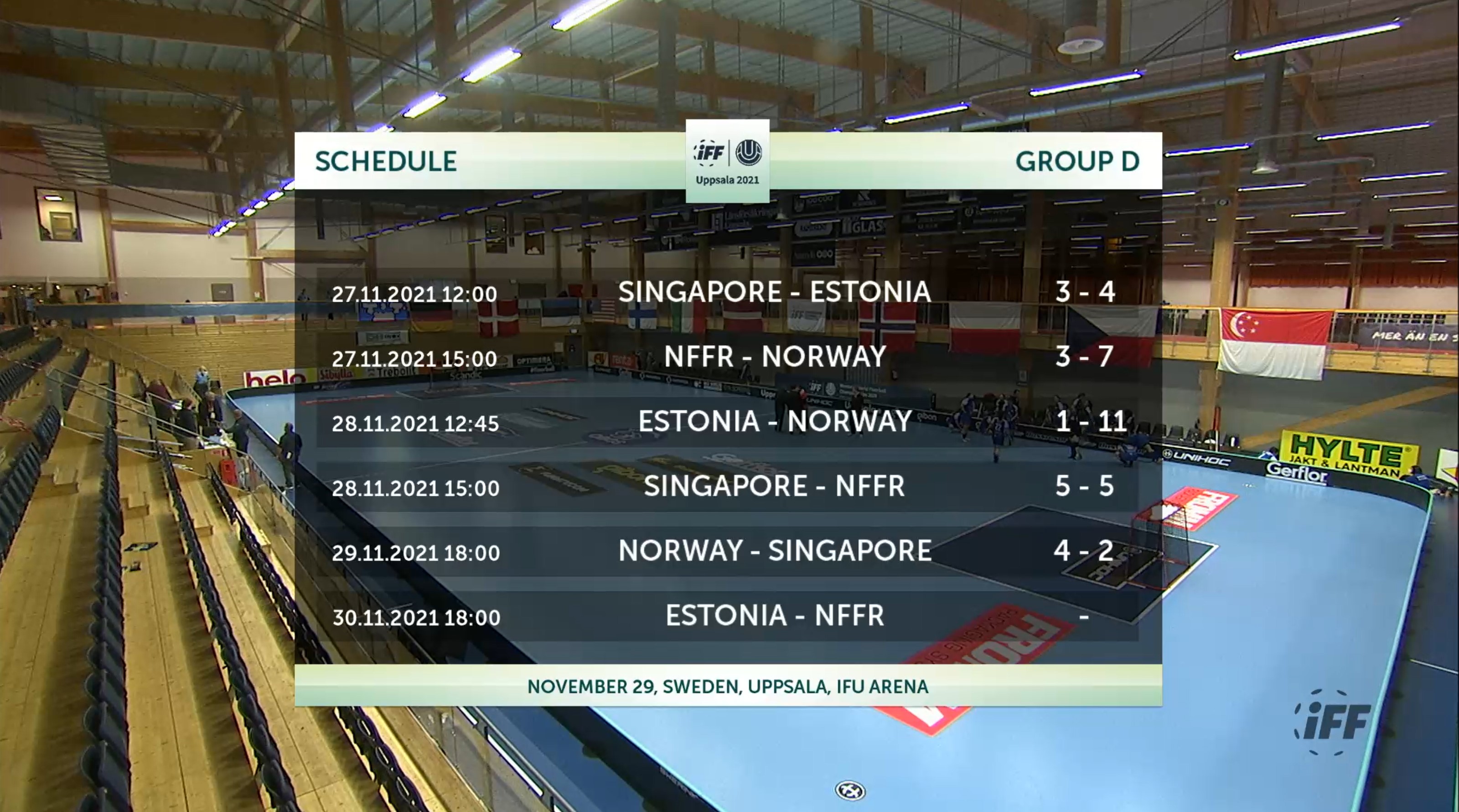