As the host of this series of Group H qualifiers of the AFC Under-23 Asian Cup qualifiers, Singapore were favoured to win their opening match against Timor Leste. But in front of a sold-out mainly Singaporean crowd of 1,000 fans (due to Covid-19 restrictions) at the Jalan Besar Stadium, it was a Timor Leste side, which played with 10 men for 55 minutes, managing to hold out for a 2-2 draw! 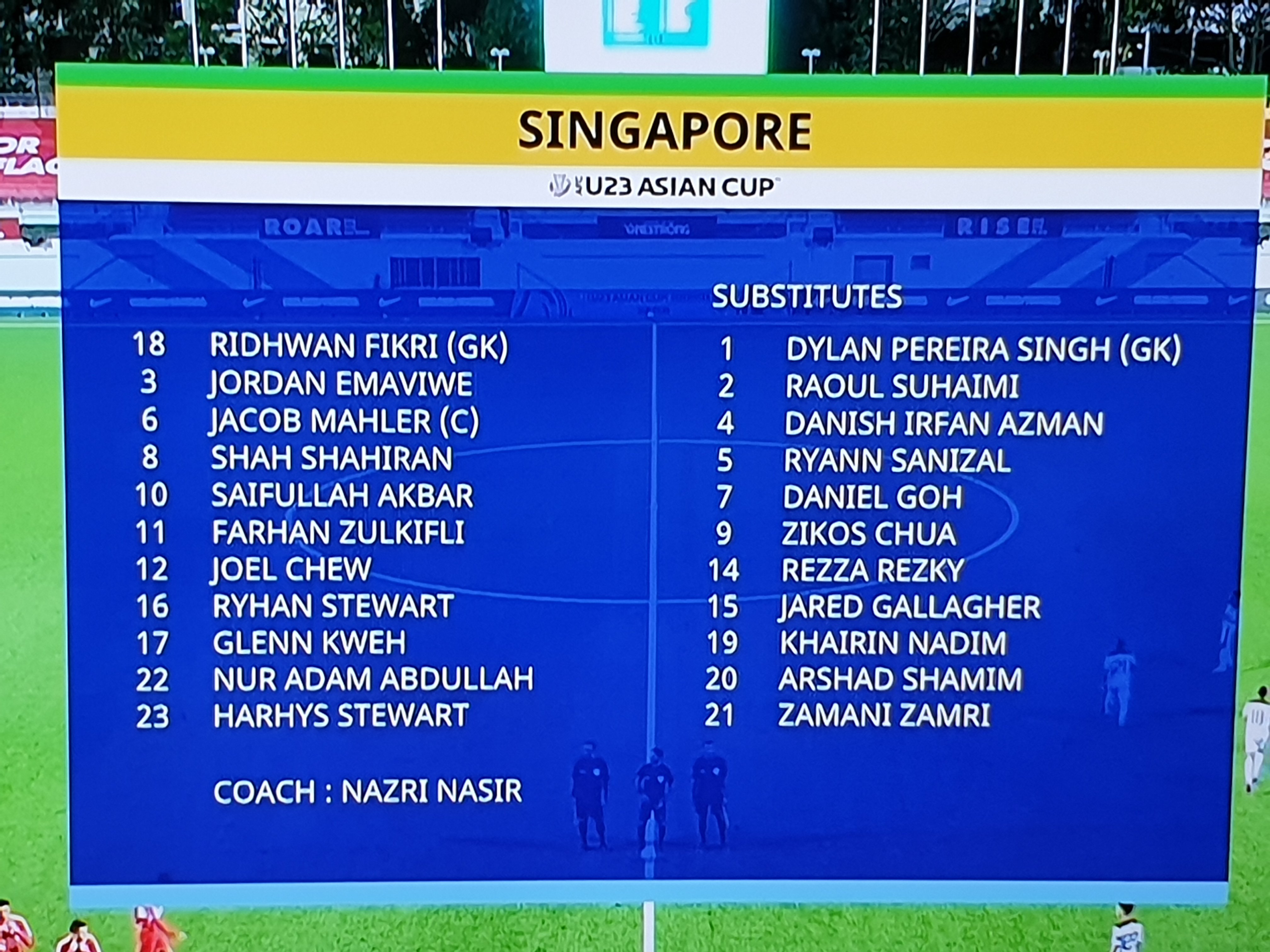 With defending champions South Korea defeating the Philippines 3-0 in the earlier match of the day (25 Oct), the clash involving the Young Lions and Timor Leste was an important one. This was especially so for the home team, as it was their 1st international game in almost 2 years! Hence, the opening few minutes seemed pretty balanced with both sides, having an equal percentage of ball possession and a few attacking options.

The first real chance for a goal came in the 15th minute of play, when Timor Leste's Mouzinho De Lima, received the ball in midfield. The Number 10 quickly laid it on for his team-mate Yohanes Gusmao, who was sprinting down the left flank. And despite TeamSG's Ryhan closing in for the ball, Yohanes crosses the ball into the box. Young Lions defender Jordan Emaviwe fails to clear it, as the ball deflects off Paulo Freitas and his team-mate Elias Mesquita shoots, but it's cleared off the line by Singapore's goalkeeper, Ridhwan Fikri! It was a lucky break for the home side, to have not conceded. 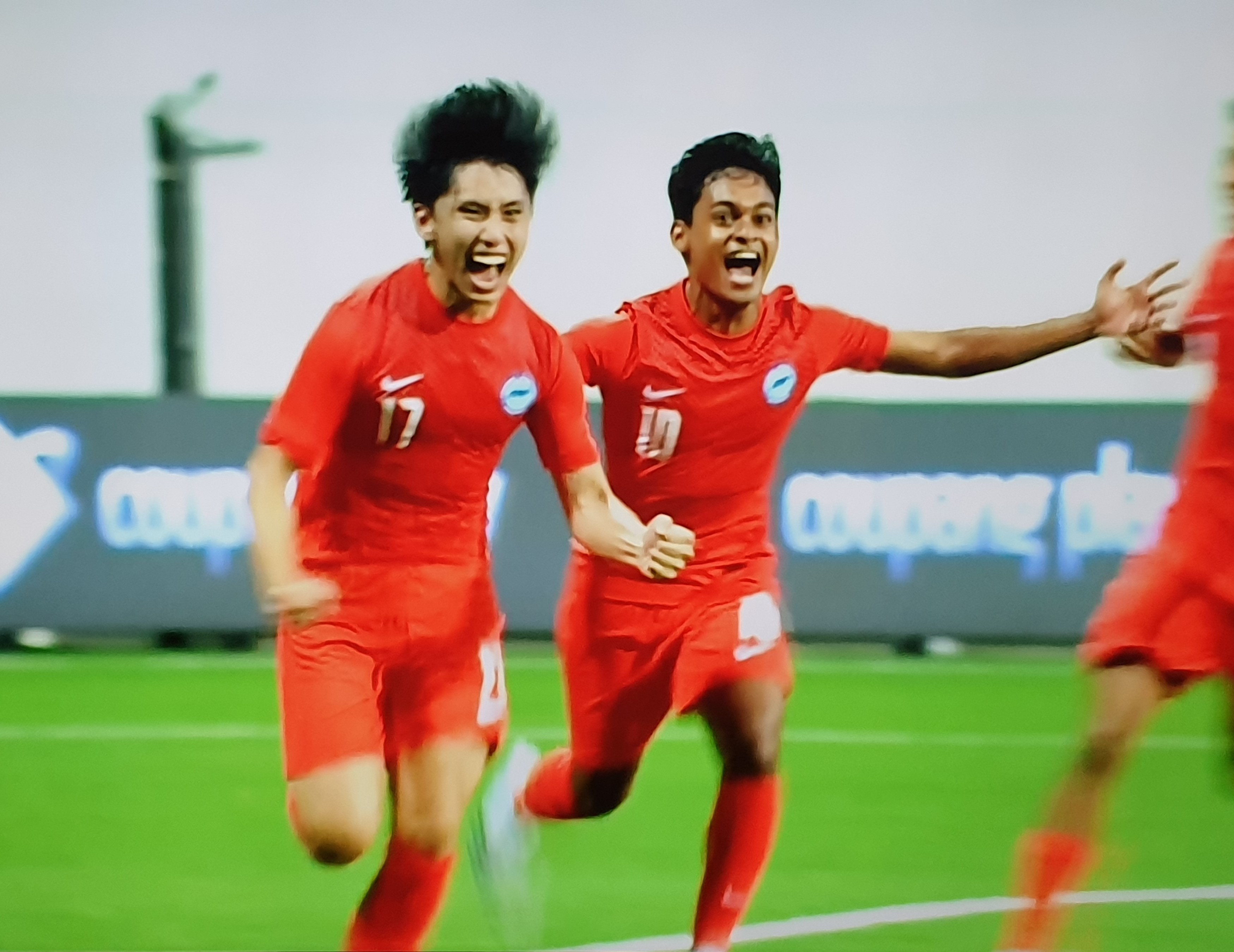 The Singapore side, through a few corner kick attempts and freekick situations, kept moving closer to breaking the deadlock. And finally in the 34th minute of play, their hardwork paid off. Joel Chew floats in the corner kick, which was punched out by Timorese custodian, Junildo Pereira. The ball fell nicely for Glenn Kweh and the No 17, blasted the ball with a left-footed volley from inside the box, for the opening goal of the match! 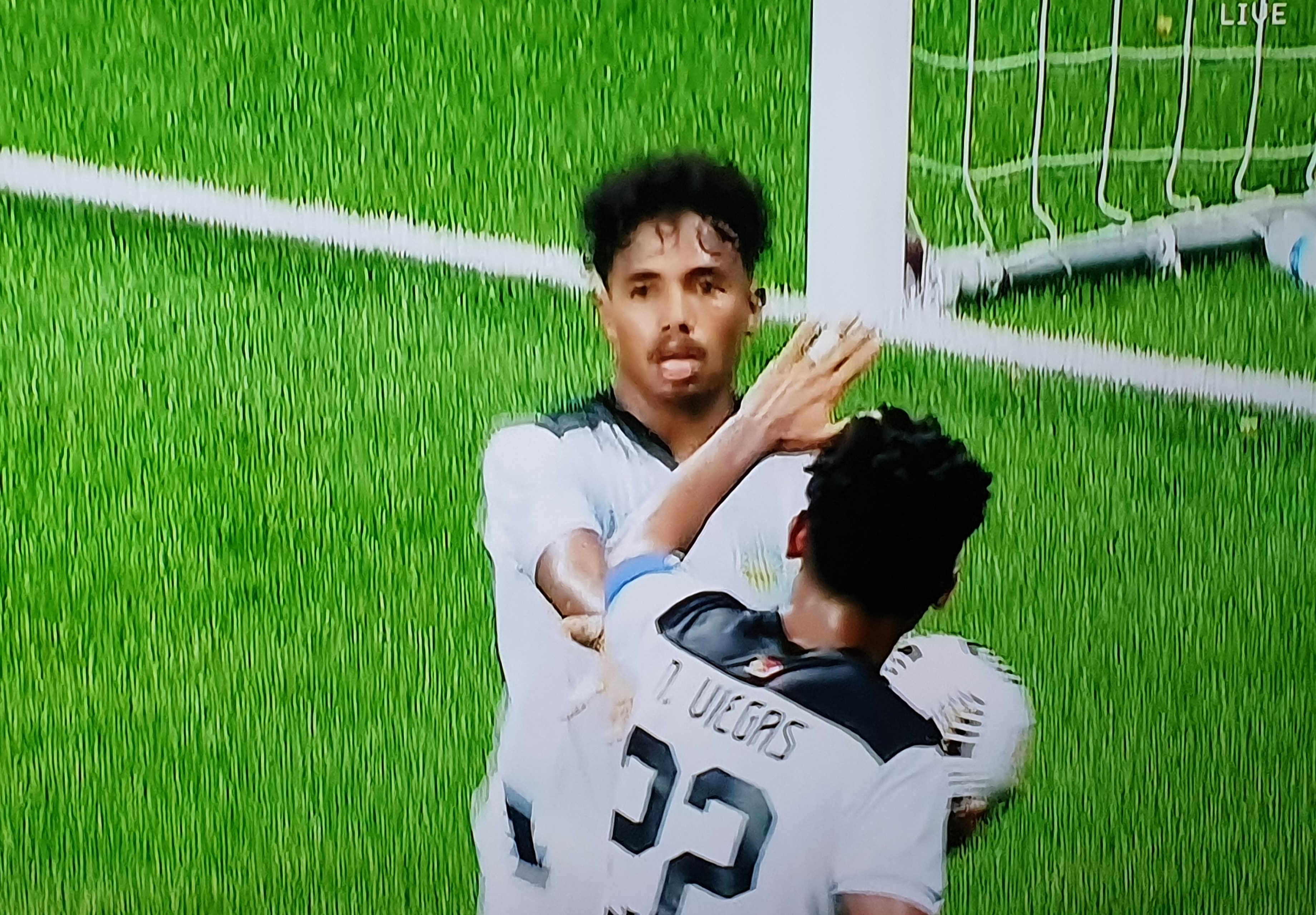 5 minutes after conceding the opening goal, it was the visitors' turn to put their names onto the scoresheet. Paulo Gali takes the corner kick, and a slight flick by his teammate Jamito Soares in front of goal, allowed Mesquita to equalise from close range. Singaporean defender Jordan Emaviwe was caught ball-watching for that crucial moment, as Mesquita came in from Jordan's blind side and beat Ridhwan with a shot from near-post. 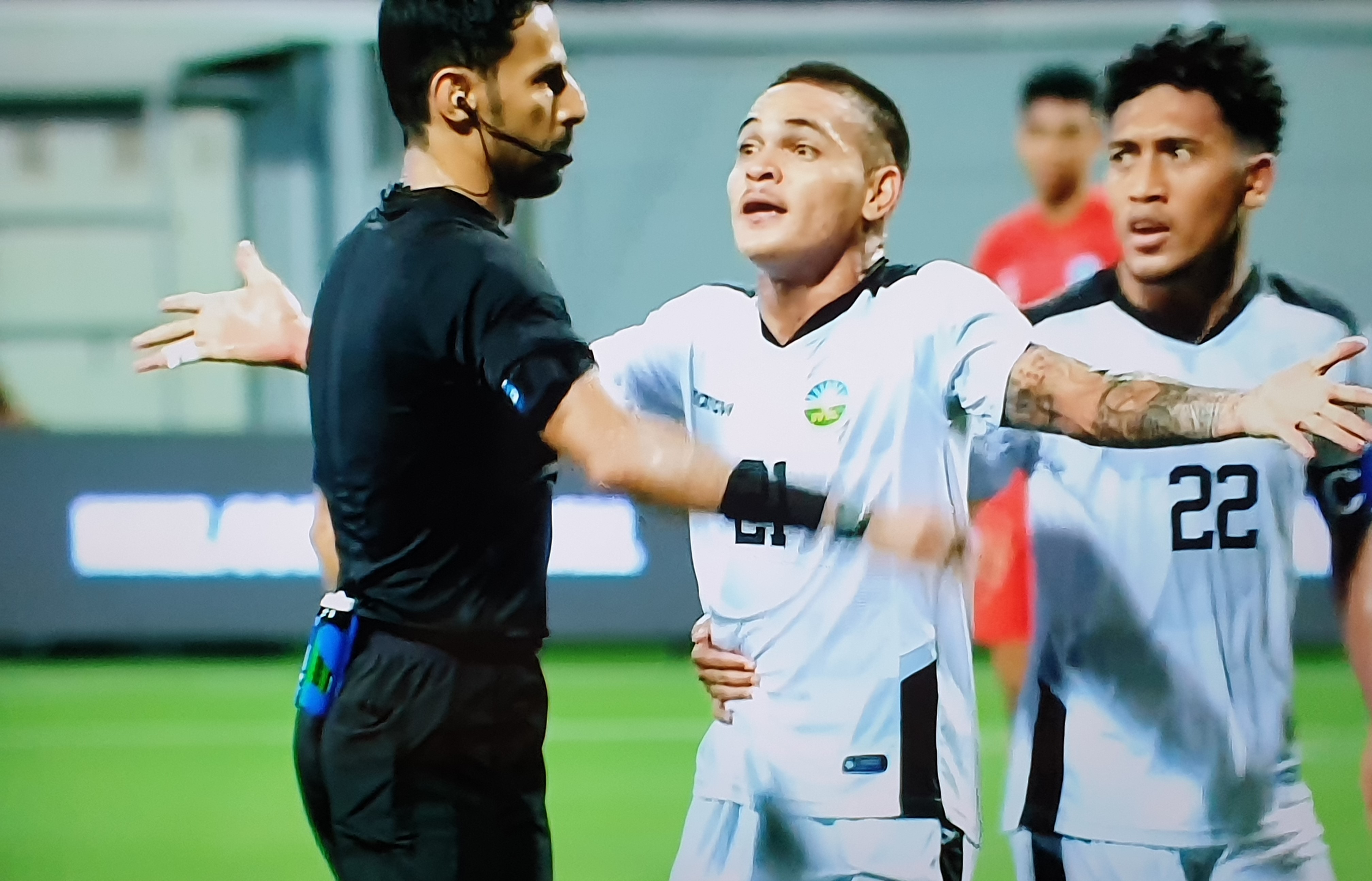 (Paulo Gali is sent off - Image from Live feed)

Less than 3 minutes after conceding the equaliser, the TeamSG side made yet another costly error. Rhyan Stewart delivered a long throw to his captain Jacob Mahler down the left flank. And although the No 6 received the ball, he lost it in less than a second due to pressure from Mesquita. Meanwhile, only Jordan had not pushed beyond the centreline. And he had to spring into immediate action when Mesquita stole the ball and was racing down the left flank. The midfield was completely open as 16 year old Gali sprints through the centrehalf.  A decisive pass from Mesquita allows Gali to receive the ball at the edge of the box and in a 1-on-1 with Ridhwan, it was the Timorese scoring for their 2nd goal of the evening!

The Stadium went silent while the Timorese camp celebrated wildly. But just before the restart, the 4th match official spoke to the Lebanese referee, Majed Al Shamrani. And the latter called up Gali and flashed the Red Card! The Timorese protested, but the referee stood firm with his dismissal orders based on Gali's verbal use of profanities at the Singaporean fans, during his goal celebrations. Soon after the restart, it was halftime with Singapore trailing 1-2.

With a 1-man advantage, the Young Lions went in search of the equaliser. But they were thwarted on several occasions with the Timorese playing with more grit, aggression and packing their defence. And as the minutes ticked down to the final whistle, both teams started to make careless errors and gave away the ball easily. And it was from 1 of those moments, which TeamSG banked on.

With literally the last attacking move of the game in the 95th minute, Glenn has the ball on the right side of the Timorese penalty box. With 7 opposing players in the box, he lays the ball back to Joel Chew, who was waiting just outside the "D". And Joel crosses the ball to centreback Jordan who was standing in the box. And Jordan calmly chested the ball down and whacked it into goal - No chance for a save from close range by the Timorese keeper. Final score was 2-2! 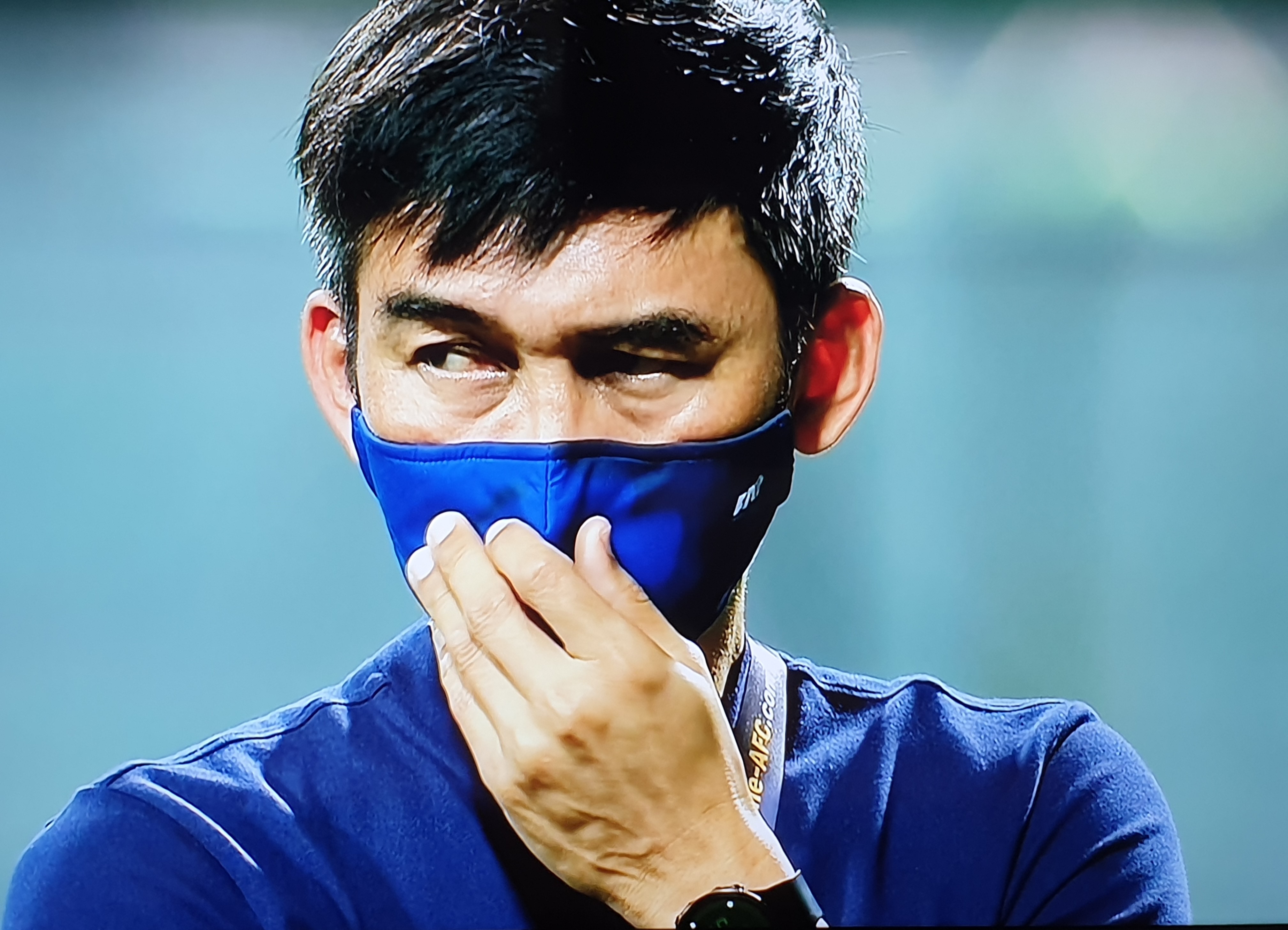 Due to the global pandemic, the final squad chosen by Singapore's Under-22 Head Coach Nazri Nasir, included 15 players who'd never tasted a day's action in international football. Team captain Jacob Mahler had 3 caps to his name (before tonight's match), similar to the vice-skipper of the Young Lions, Saifullah Akbar. 19 of the 23 players selected were from the Young Lions squad which finished at the bottom of the Singapore Premier League standings 2 weeks ago (4 wins in 21 league matches). In addition to more than 6 months handling the team in the weekly SPL matches, coach Nazri also had 3 centralised national training sessions in June, September and October. 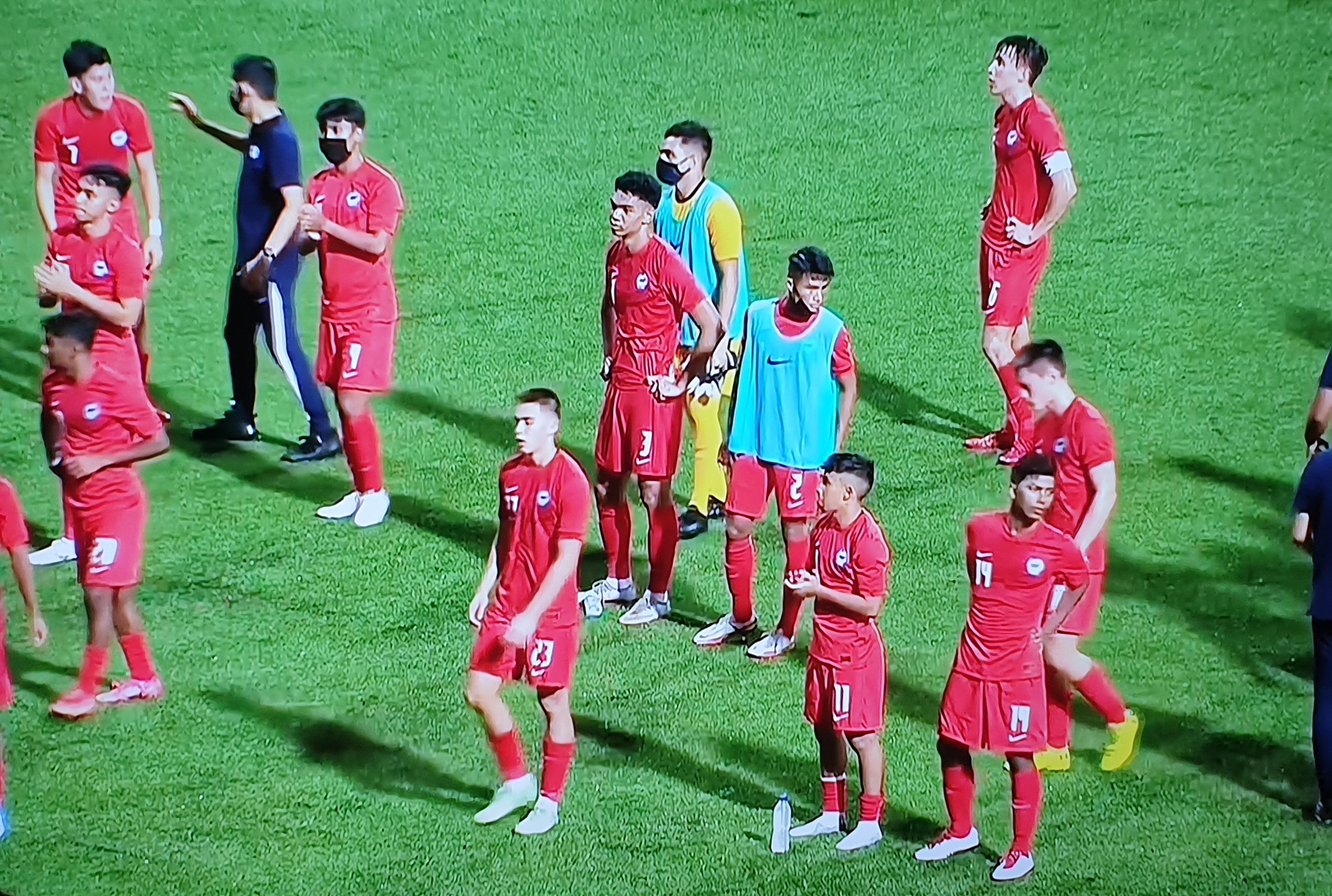 TeamSG's Under22 squad has a great deal of potential to do well against the Philippines and even the highly fancied Koreans in their upcoming matches. But the Young Lions, need to maintain their composure throughout the game, reduce their unforced errors and textbook mistakes, defend confidently in numbers and then surge forward with creativity, vision and aggression. With a good enough showing in this qualifying series, a few of these players might give their senior counterparts a real challenge for places in the final selection for the AFF Suzuki Cup campaign in December! 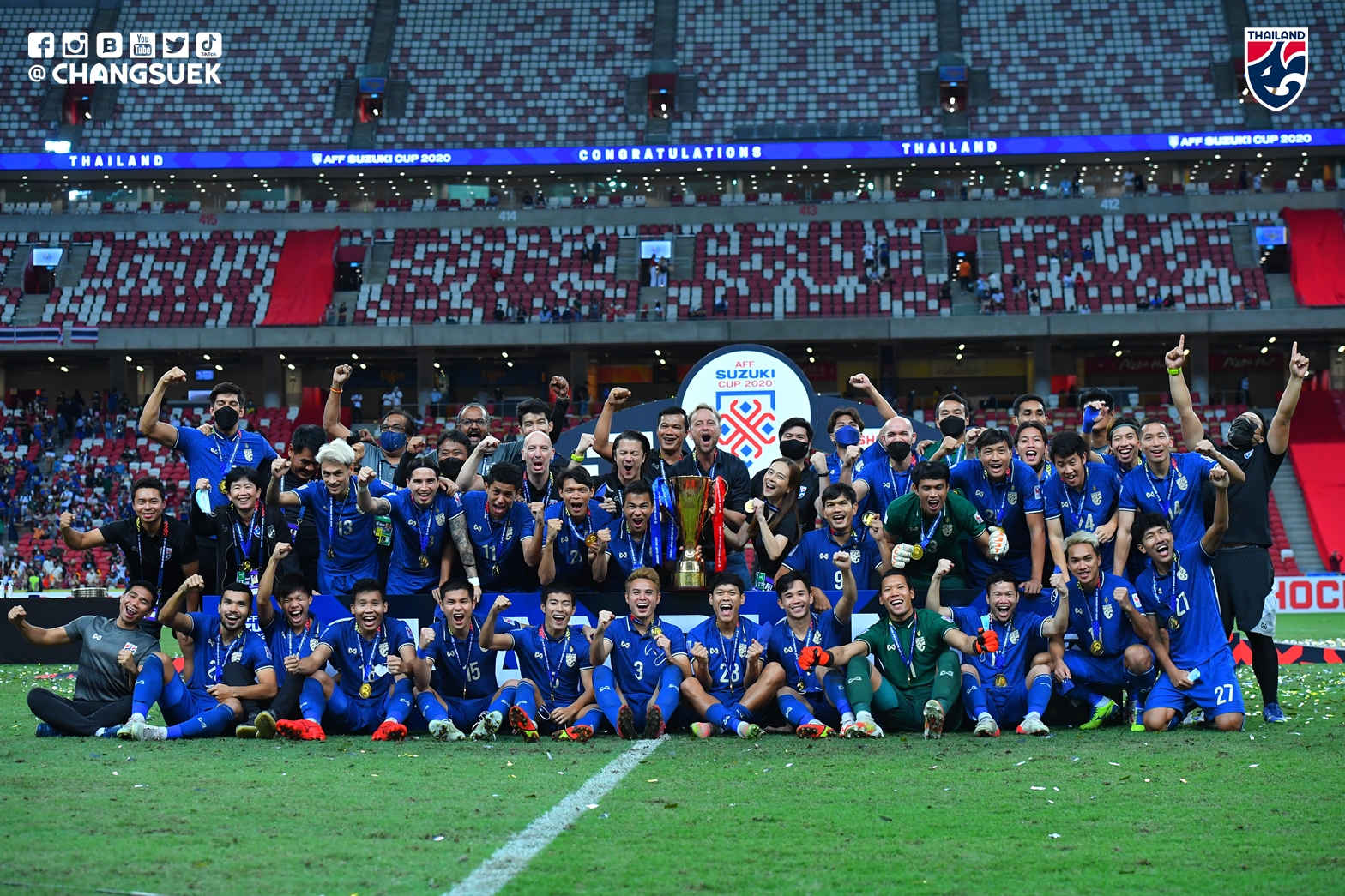