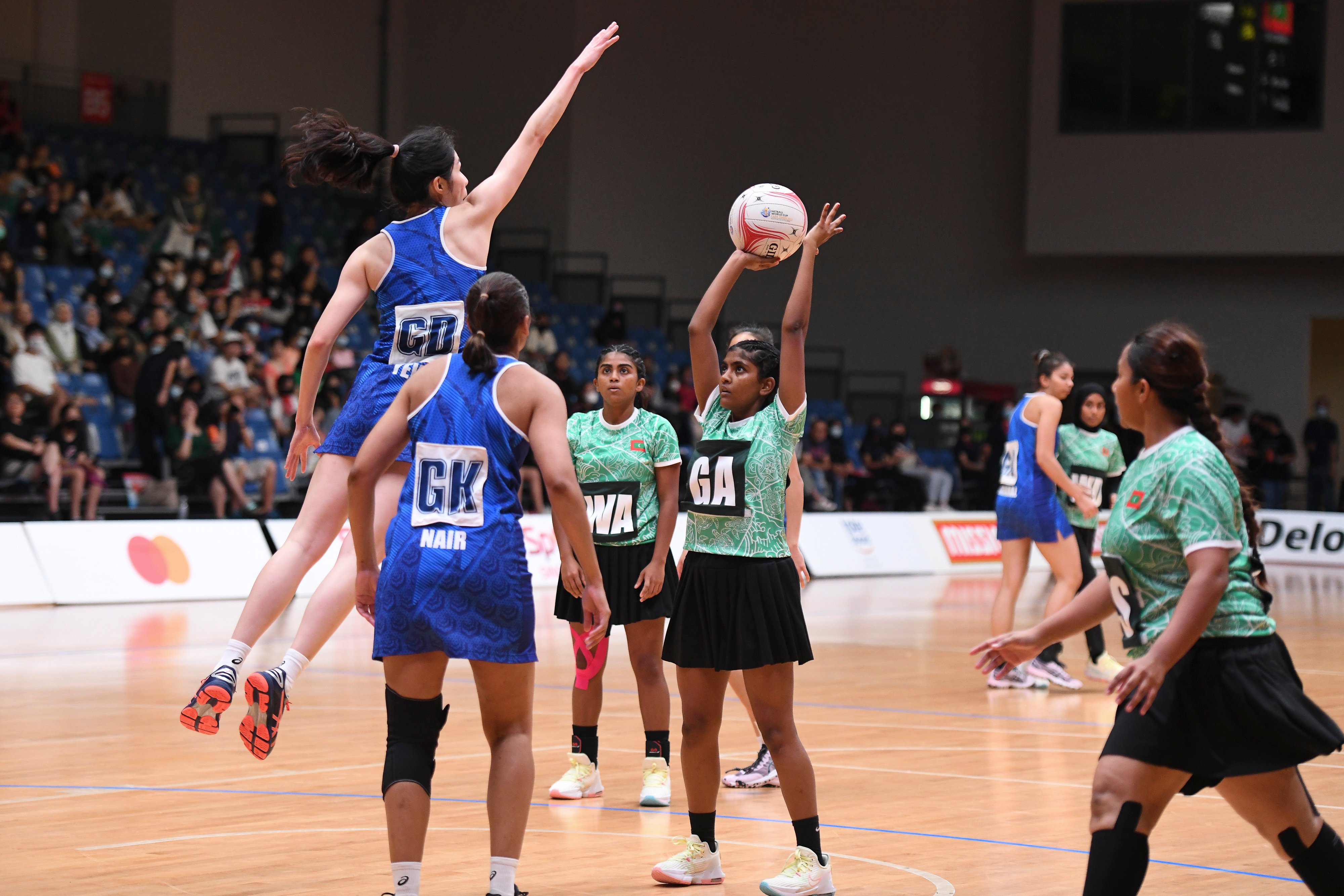 4 September 2022 – 3-time Asian champions Singapore booked their place in the semi-finals of the Asian Netball Championships 2022 with a 96-10 win over Maldives at the OCBC Arena on Sunday (4 September), finishing top of Group B. Hong Kong also secured their semi-final spot after beating Thailand 56-29 to top Group D. In the other matches of the day, the Philippines (Group A) and Brunei (Group C) staved off spirited comebacks from their opponents, defeating India (45-41) and Chinese Taipei (38-34) respectively.

Singapore shooter Goh Wei Ping, who was called up to the squad following Charmaine Soh’s injury on Saturday, made her international debut on the second day of the Asian Netball Championships. The 21-year-old, who contributed 30 goals and recorded an 83% conversion rate, said: “I’m very honoured to be able to play alongside this very supportive team, and also very thankful that they always give me encouragement when I step on court. I was nervous because it's my very first international competition, but I'm glad everything went well. All the seniors gave me advice – Kim (Kimberly Lim) was rubbing my hands because it was so cold and I'm very afraid of the cold. She told me to be confident, settle down, trust myself and believe in what I can do. I hope our team will be able to attain the championship of course, because this is my first one and it’s on home ground, so it definitely will mean a lot to us.” 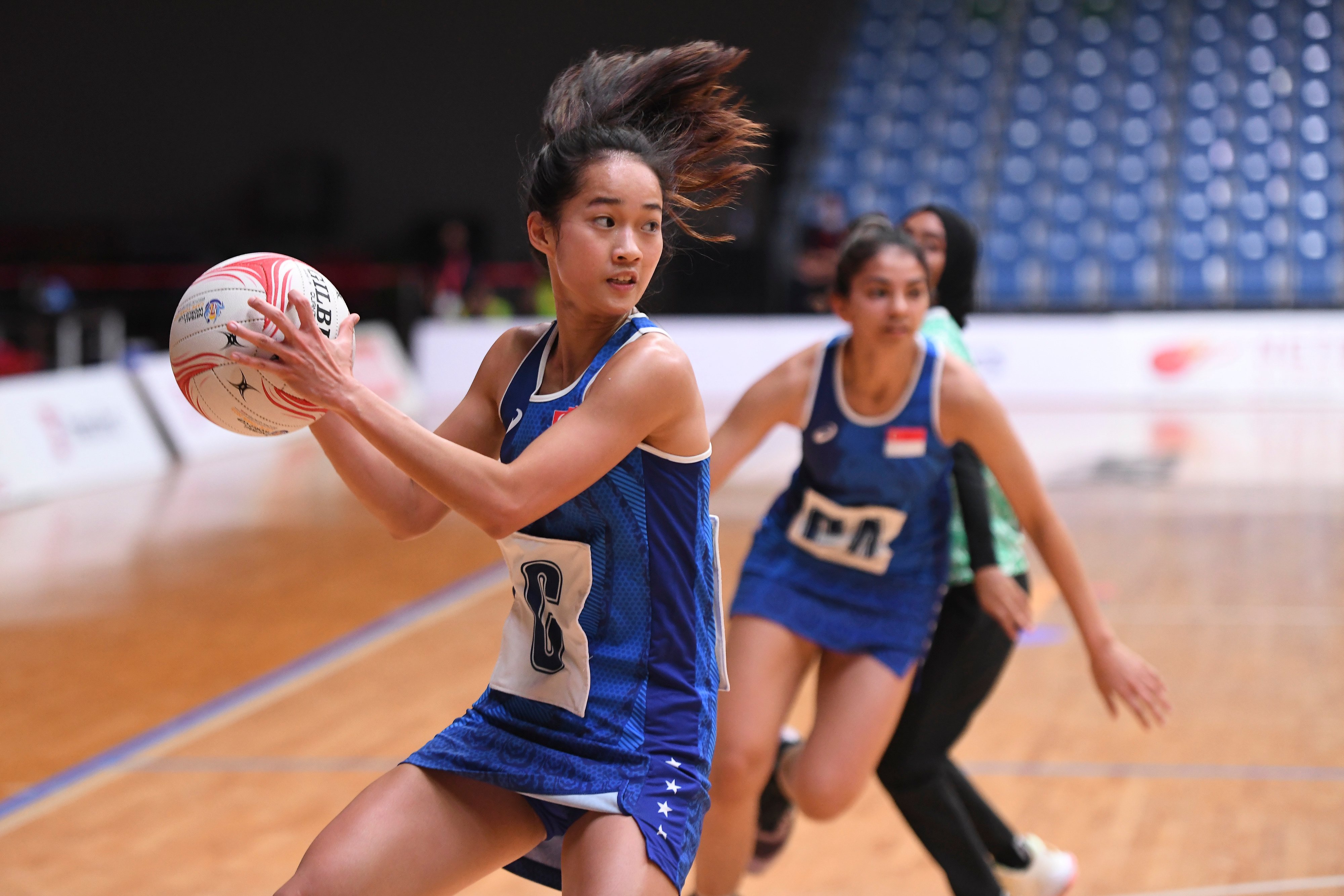 Singapore head coach Annette Bishop said of her side’s strong performance: “There’s a lot of nerves, so for (Goh) to give a performance like today was excellent and I’m really happy with what she’s put out there. It’s exciting for us to be in the semi-finals. Our first step was actually these first two games, take one game at a time and build. We’ll now look towards the next (match) that we have. We were just working on making sure we make our combinations a lot stronger and both Japan and Maldives have provided some really good challenges as well for us to adapt to, so that was good for us. Once again, it’s one game at a time now and we know that it’s going to get tougher.” 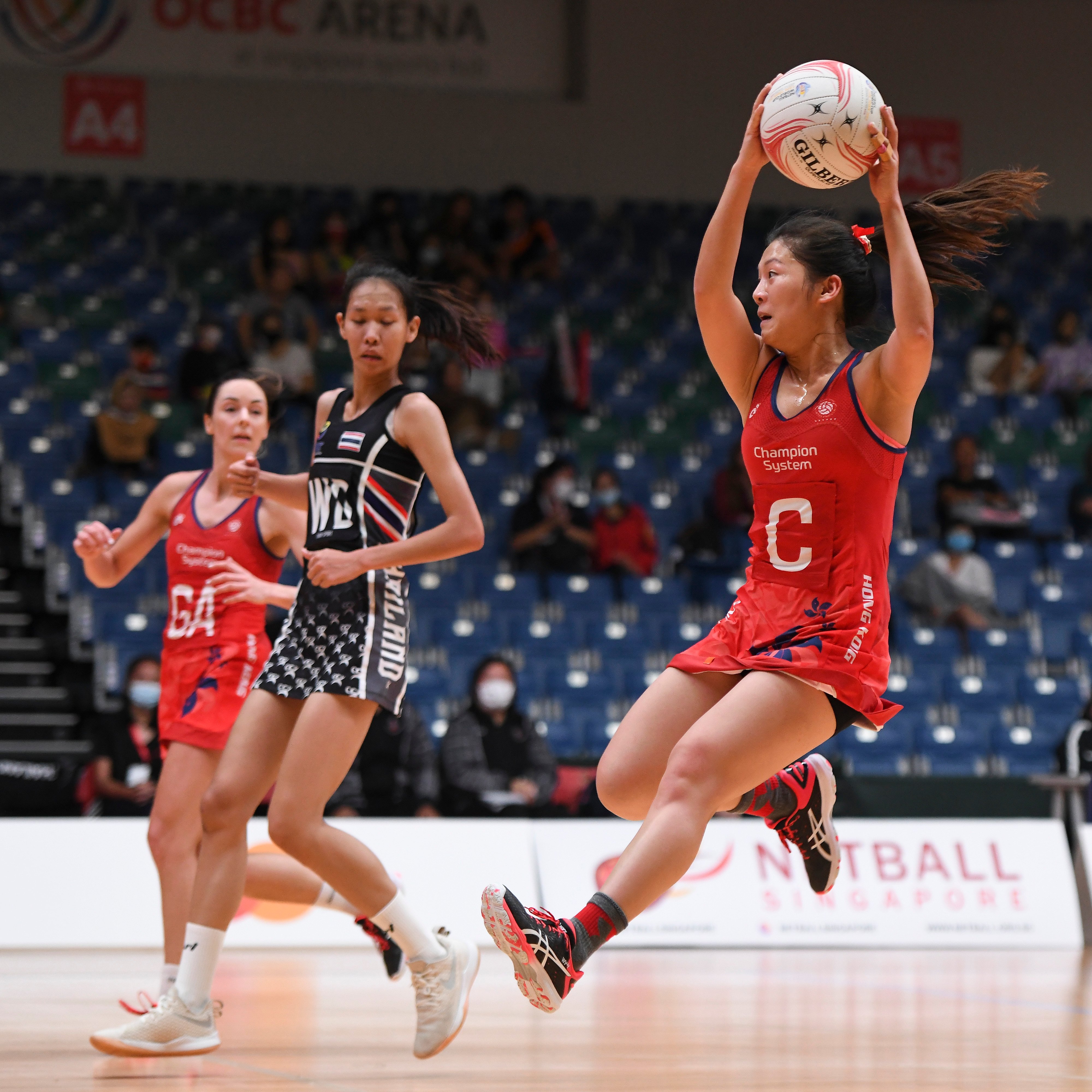 Round 2 of the championships will see the top team of each group drawn into the same pool, where they will play group matches against one another. Singapore will face Hong Kong in Round 2 on Tuesday, and Hong Kong vice-captain Lo Fung Yee said: “Some of us are quite new to the team; I saw a lot of new faces in the Singapore team as well. We’ll definitely have our different combinations and it’s an all-new experience for us, so we are very excited to get competitive with the Singaporean team. Today was good, we haven't been playing internationally for three years so it gives us a lot of confidence to reach the semi-finals. We’re really excited because we are here to get our ticket to South Africa, and it's really exciting to take one step forward to our goal. 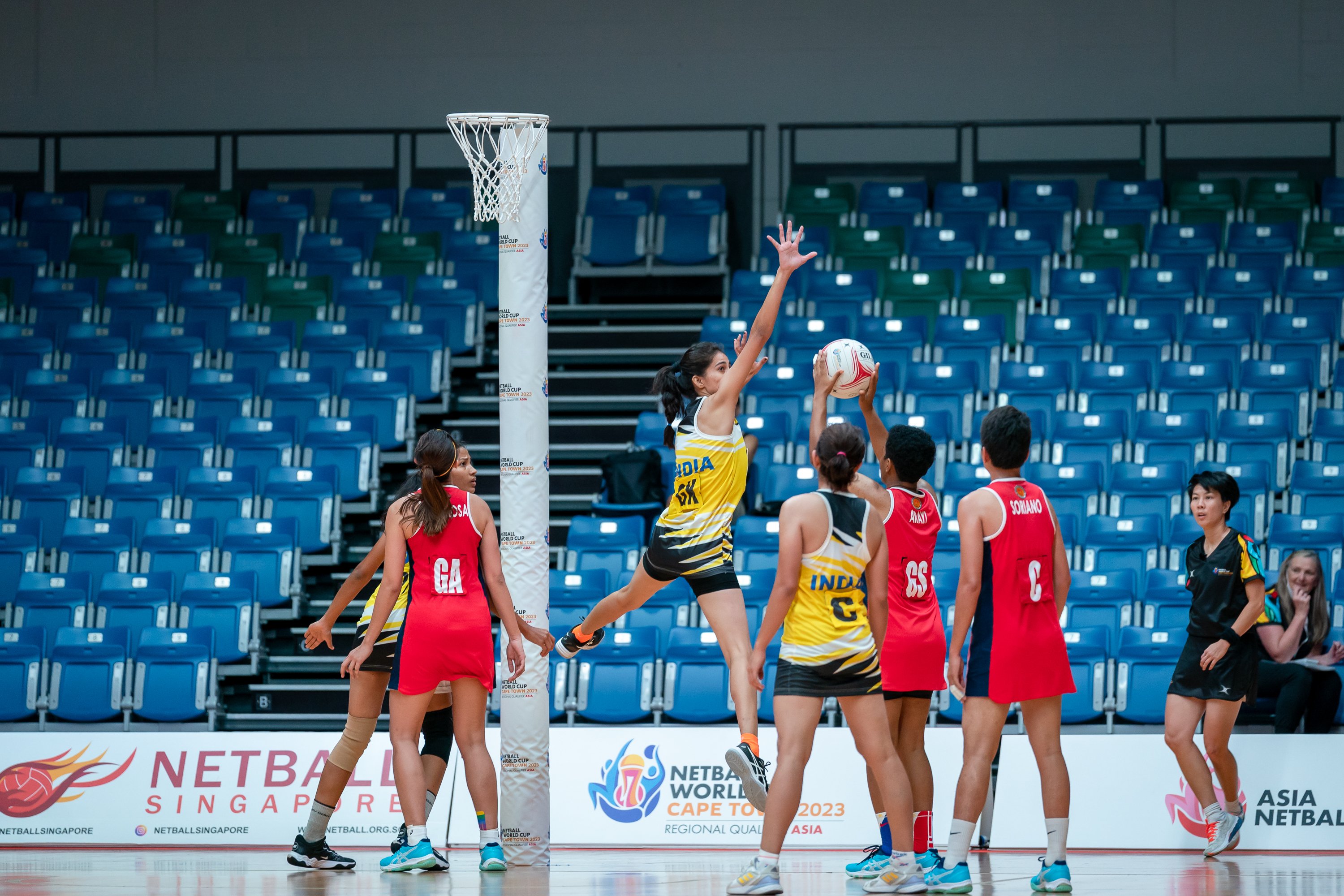 In the first match of the day, the Philippines opened their Asian Netball Championships campaign with a 45-41 win over India. After a slow start to the first quarter where they trailed 1-4 and 7-9, the Philippines levelled the score at 9-9 and eventually took the lead, holding a 36-29 advantage entering the final 15 minutes. India found their momentum too late in the match, and could not mount a successful comeback despite outscoring their opponents 12-9 in the last quarter.

Philippines captain Lomogda Karen Domingo said: “We tightened our defence in the first quarter, and it worked. This is our first game, so we’re still adjusting. Hopefully we do better in the next game against Sri Lanka, because they have a strong shooter. We try to play our A-game every time, and we’ll analyse Sri Lanka’s players for our next match. For me personally, I felt my shooting was a bit off today, so I want to practise and work on improving that.” 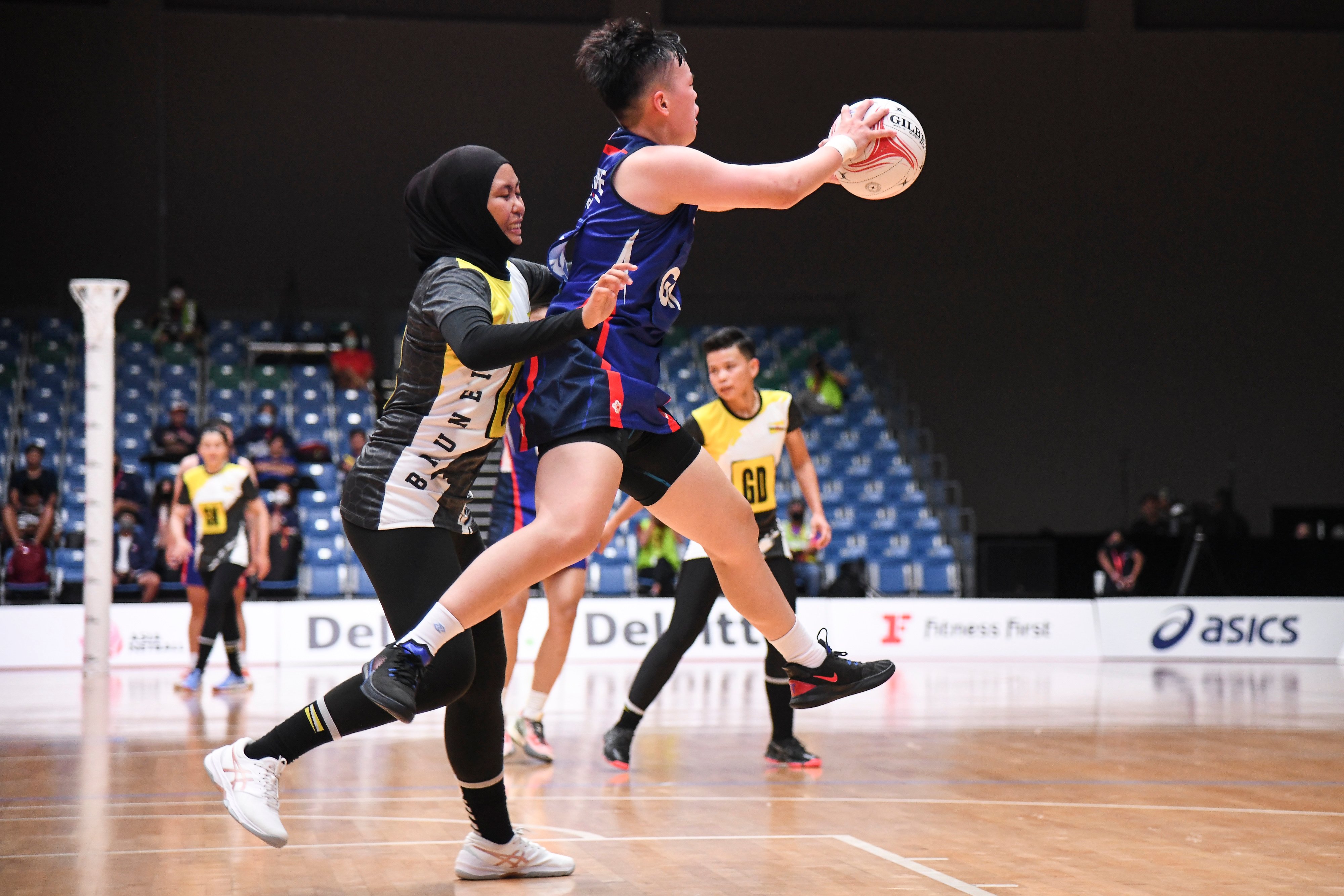 Team Brunei vs Chinese Taipei at the OCBC Arena on Day 2 of the ANC 2022 campaign. Photo Credit : Netball Singapore

For Brunei captain Siti Marhayati, there were also areas of improvement and learning points for her team, after a lapse in concentration saw Chinese Taipei win the third quarter 15-8 and narrow the game score to a one-goal margin. Brunei started strong to lead 21-13 at the end of the first half, but their opponents put up an inspired performance in the third quarter and trailed 28-29 at the end of the quarter.

Siti Marhayati, who plays goal attack and goal shooter, said: “There are a lot of learning points from the match. We did lose a bit of focus and Chinese Taipei read our game well. It was a great game, and I’m glad the team didn’t give up. Their fight back and the eagerness, especially in connections among the team, really helped and I’m so proud of them. Our coach told us to stay calm (after the third quarter) because we were still in the lead, so we told one another to relax and stay composed.”

The preliminary round concludes tomorrow, 5 September, with Malaysia facing Chinese Taipei and Japan taking on Maldives, while Philippines will play against Sri Lanka. Round 2 starts on Tuesday, 6 September.

You can also catch the live streaming to all Asian Netball Championships 2022 matches via the Netball Singapore Facebook page!