Racquet sports took centre stage for Team Singapore on day 7 of the 2022 Commonwealth games as the singles and doubles category for badminton and table tennis began. 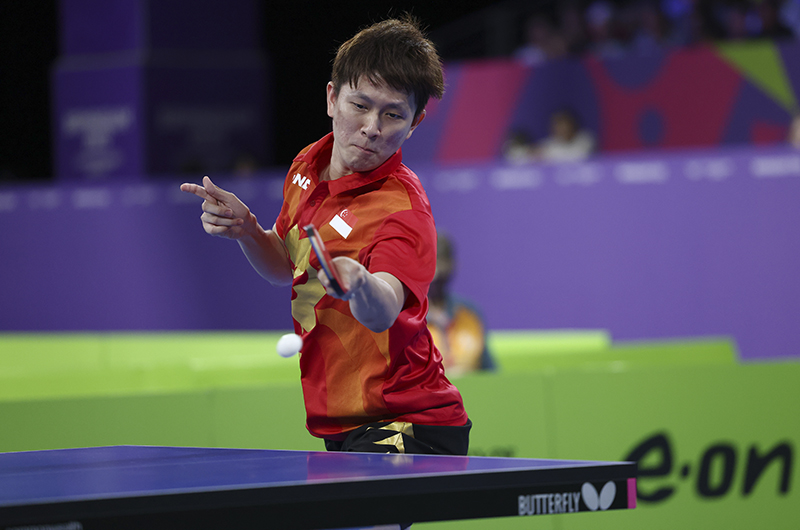 Clarence Chew with an aggressive performance to seal his passageway into the next round of the competition. Photo Credit: Sport Singapore/Darren Staples

And it was the mixed table tennis pairing of Clarence Chew and Zeng Jian that dazzled the crowd at the NEC Hall 3. Both players from Singapore were known for their style of relentless attack and it was something their Fijian opponents couldn’t handle, succumbing to three games of 11-3 defeats.

Clarence and Zeng Jian blitzed their opponents in just 13 minutes, taking roughly four minutes each to seize every game en-route to the Round of 16, where they will meet Malaysia’s Javen Choong and Karen Lyne.

Meanwhile, Koen Pang and Wong Xin Ru started their match against England by taking the opening two games. But Jarvis Tom and Charlotte Bardsley staged a comeback to reverse the encounter and seal a 3-2 win in 40 minutes. 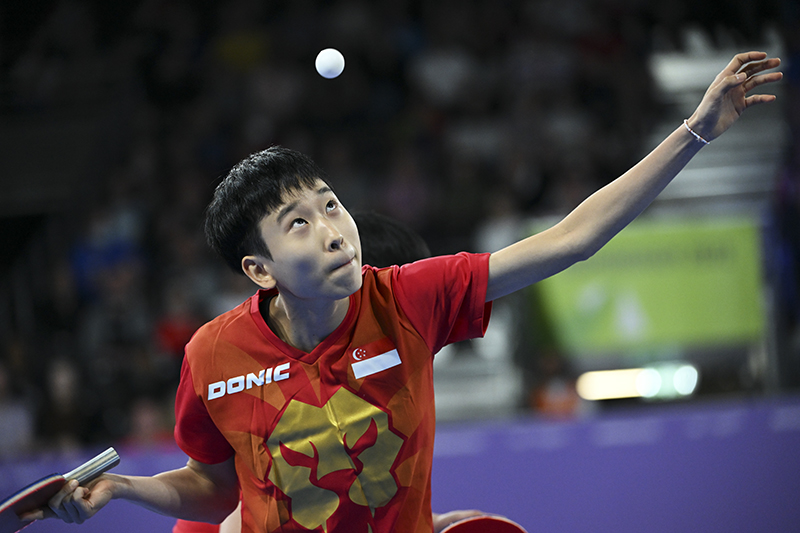 Zhou Jingyi focused on the ball in her match that would end in defeat. Photo Credit: Sport Singapore/Andy Buchanan

Izaac Quek and Zhou Jingyi made up the third team Singapore sent to the mixed doubles. Earlier in the day, the duo defeated South Africa’s Shaun Jones and Kalan Musfiquh with a convincing 3-0 score. Their Round of 32 clash later in the day was a trickier affair against hosts and favourites Liam Pitchford and Ho Tin-Tin. And it was the English pair prevailing 3-2 to advance to the next stage of the competition. 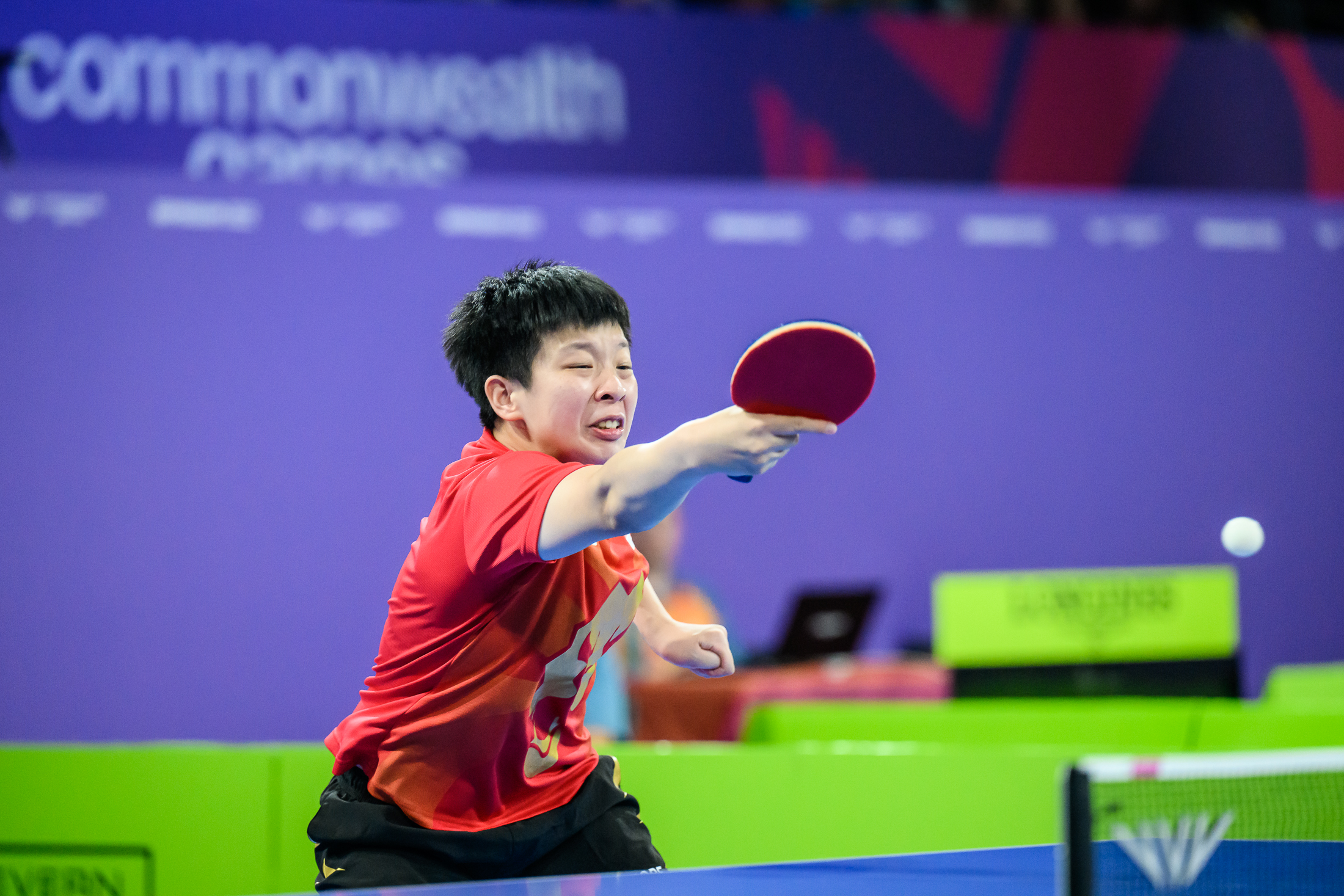 In the Women’s Singles event, Zeng Jian made it to the Round of 16 after powering past Malaysia’s Tee Ai Xin with a 4-0 beating while Jingyi fell out of contention after a 4-3 reversal to Sophie Earley.

And in the Men’s Doubles, Clarence and Ethan Poh saw little problems as they finished off Malaysia’s Lee Yong Yi and Leong Chee Feng 3-1 in 35 minutes. The other partnership of Koen Pang and Izaac Quek also secured a 3-0 win over Seychelles’ Mick Crea and Godfrey Sultan. 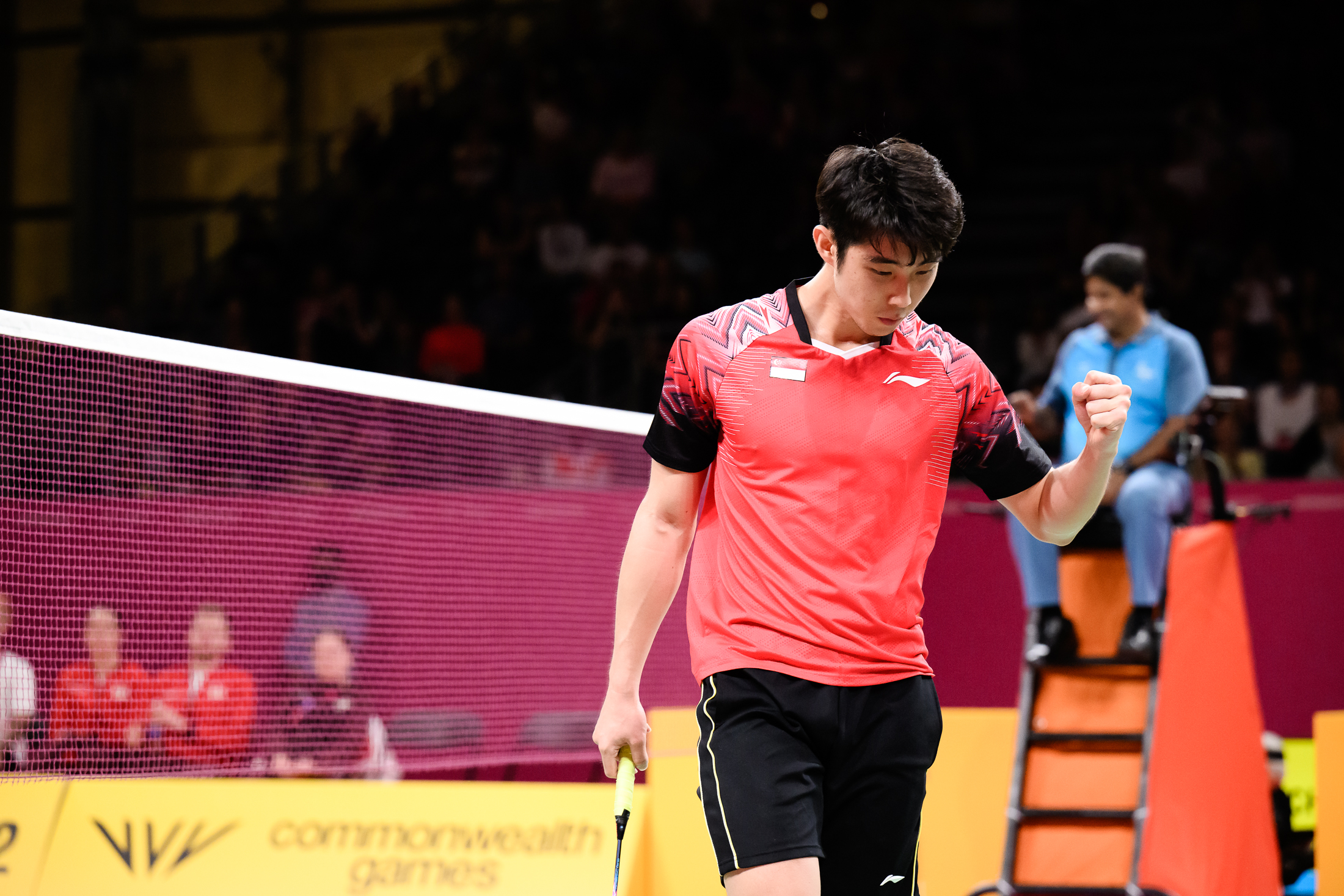 Loh Kean Yew powers through to the next round of the competition with a convincing performance. Photo Credit: Commonwealth Games Singapore/Andy Chua

In the Men’s Singles event of badminton, Loh Kean Yew breezed past South Africa’s Robert Summers with a 21-16, 21-9 victory to set up a clash with Alexandre Bongout from Mauritius in the Round of 16. Teh Jia Heng is also in the Round of 16 after eliminating Pakistan’s Murad Ali with a 21-14, 21-16 scoreline.

In the Women’s Singles, Nur Insyirah Khan set up a tie with Canada’s Michelle Li in the Round of 16 after navigating past Aminath Nabeeha from the Maldives 2-0. She will be joined by Yeo Jia Min, who cruised also to a 2-0 win over Cyprus’ Eleni Christodoulou. 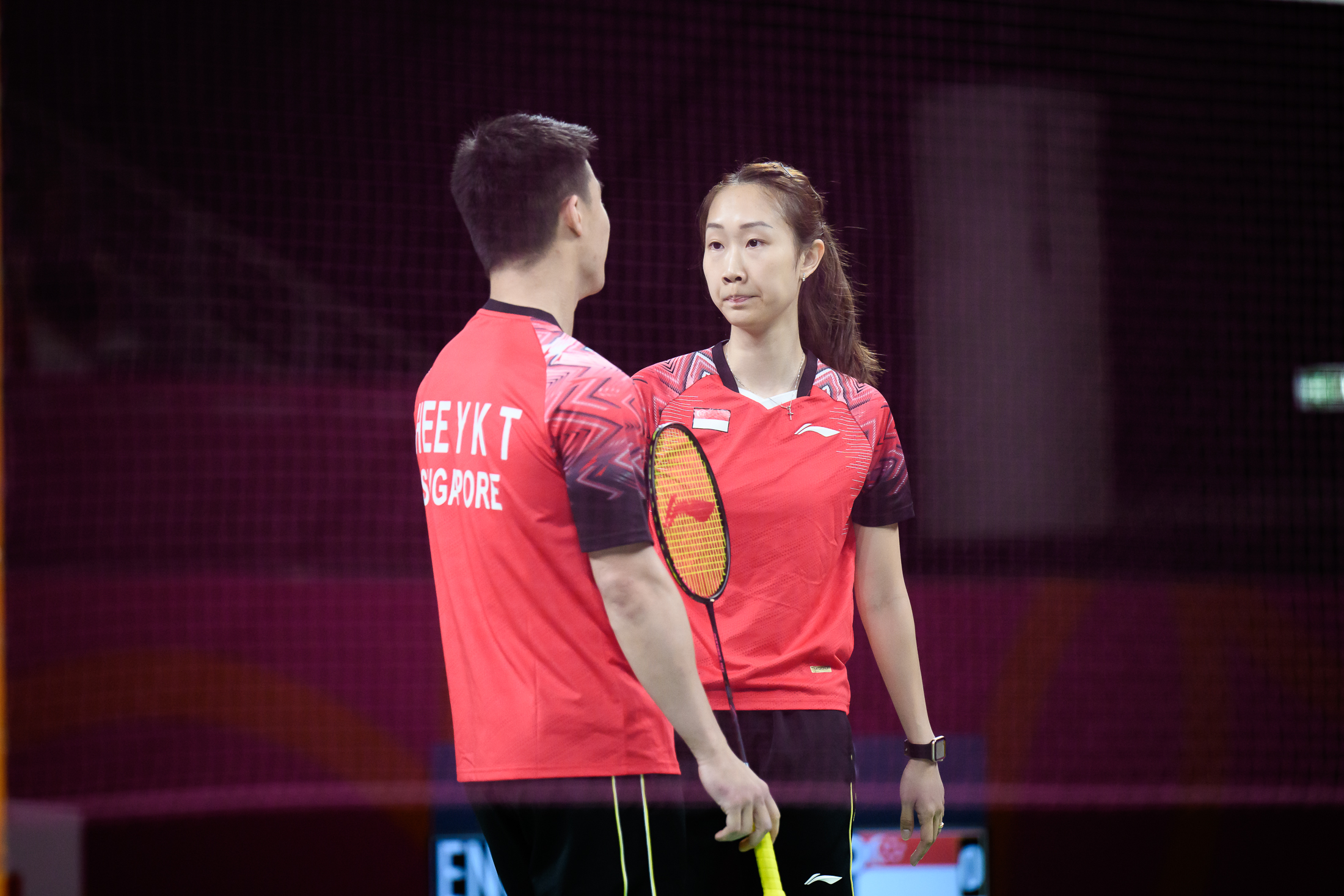 In the mixed doubles event, Terry Hee and Jessica Tan are through to the Round of 16 after beating Zambia 2-0. However, the other pairing of Andy Kwek and Jin Yujia fell to Malaysia, ending their involvement in the event. 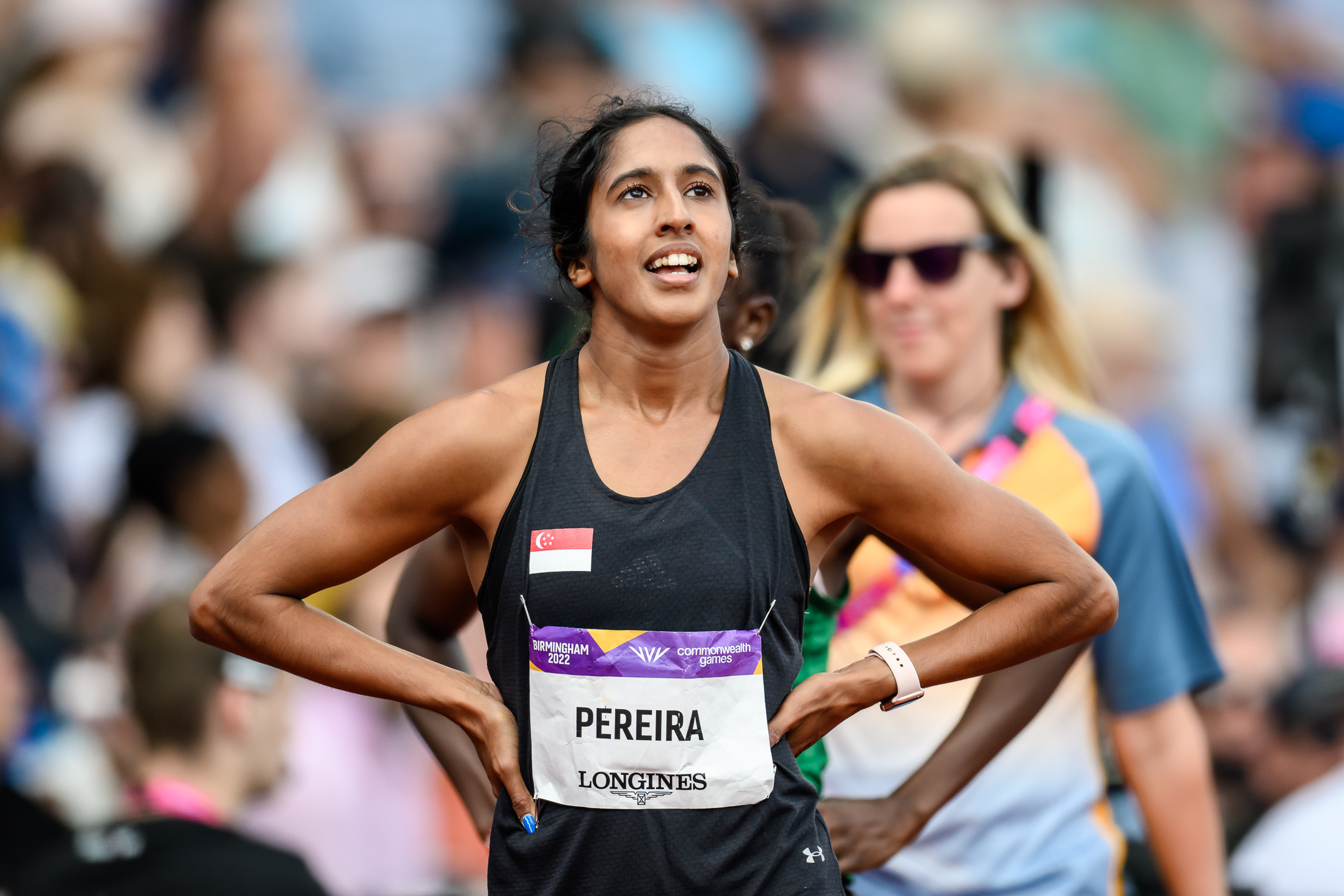 And in athletics, Shanti Pereira has smashed her second National Record of the 2022 Commonwealth Games after a time of 23.46 seconds in the Heats of the Women’s 200M sprint. Besides beating her former personal best time of 23.52 seconds, a time that got her gold at the SEA Games earlier this year, Shanti has also qualified for the semis of the event. 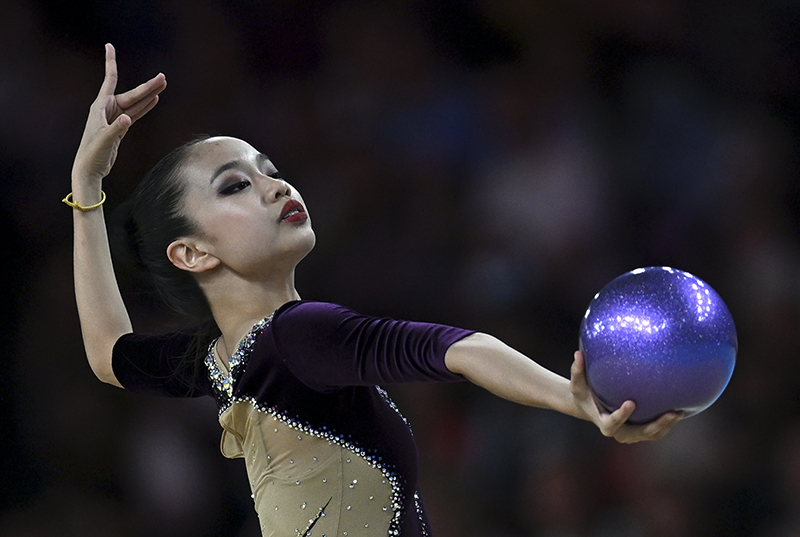 Over to gymnastics and the Women’s (Rhythmic) Team of Sophia Ho, Kaitlyn Chia and Katelin Heng finished their campaign with a score of 216.900 to place 7th out of 7. 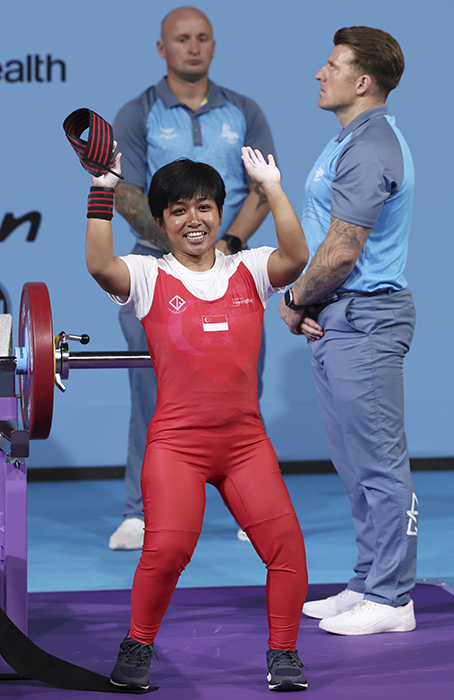 And in the Women’s Lightweight Final of Para Powerlifting, Team Singapore flagbearer for the 2022 Commonwealth Games Nur Aini Mohamad Yasli chalked up 74.7 points to also finish 7th (out of 10).