Guaranteed gold: Feng Tianwei and Zeng Jian to battle it out in Birmingham

Team Singapore will be guaranteed gold and silver in the Women’s Singles table tennis event after Feng Tianwei and Zeng Jian both made it to the final. 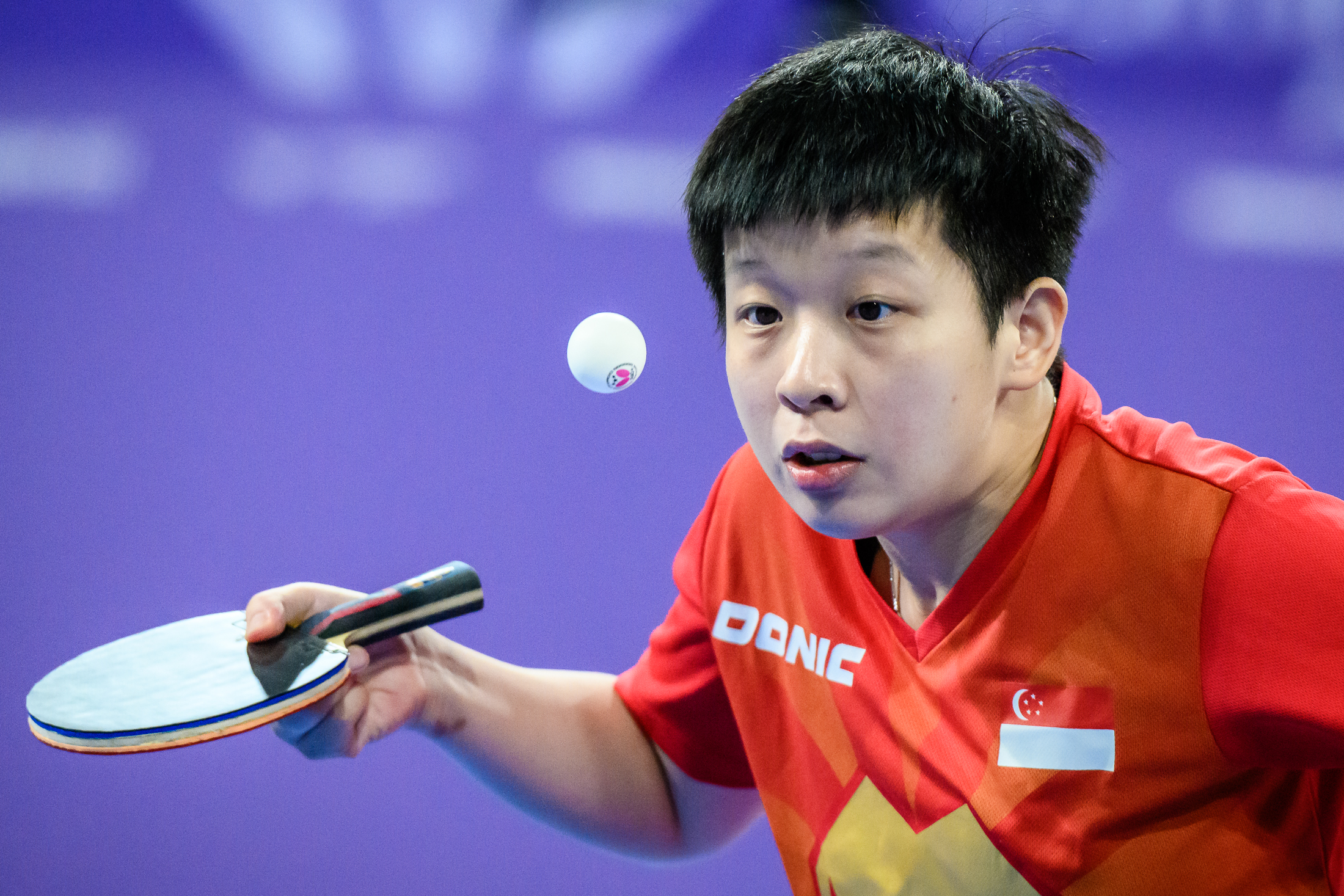 Zeng Jian was the first to book her spot in the final two, but Australian Liu Yangzi did not make things easy for her. The world number 72 Yangzi started the stronger of the two and took the opening two games 11-7, 11-9.

The turning point in the match came when Zeng Jian came from behind to force a late 12-10 reversal in the third game. The world number 60 didn’t look back from that point and quickly took the next three games 11-4, 11-6 and 11-9 to claim the win. 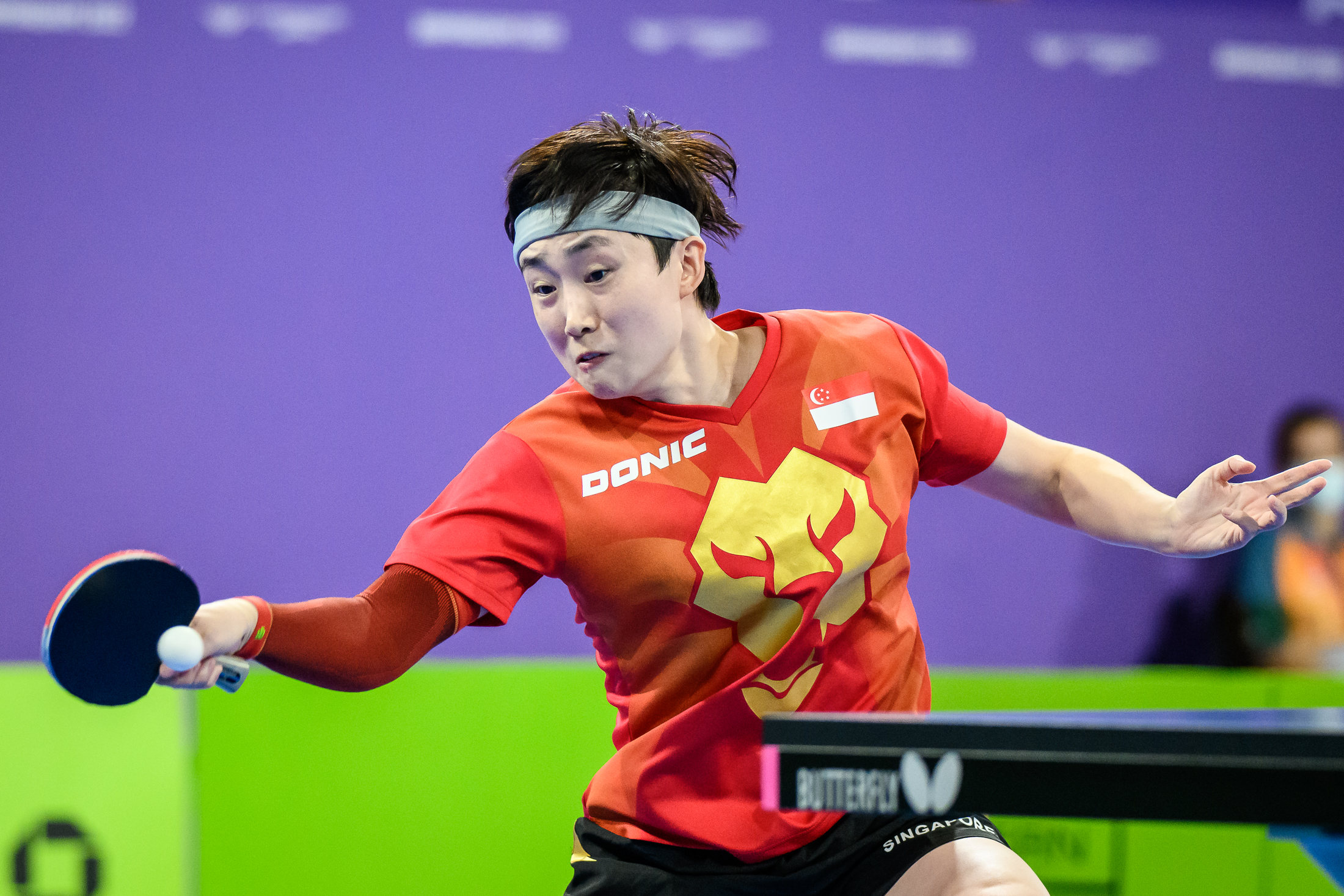 Feng Tianwei puts in a powerful performance to claim her spot in the final of the Women's Singles. Photo Credit: Commonwealth Games Singapore/Andy Chua

Tianwei also endured a tough evening after being pushed to seven games by her opponent, India's Sreeja Akula. The pair battled to a game 7, and it was Tianwei who prevailed. The world number 16 edged her opponent 12-10 in game 7 to progress to the final.

35 year old Tianwei took gold at this very event in 2010 and 2014, and she will have the chance to reclaim the title after falling short at the 2018 Games in Gold Coast.

For 25 year old Zeng Jian, this represents a chance to grab her first Singles gold medal for Singapore since her debut in 2019. It’s also a chance to make up for the Southeast Asian Games earlier this year in Vietnam, where she finished with three silvers and a bronze. 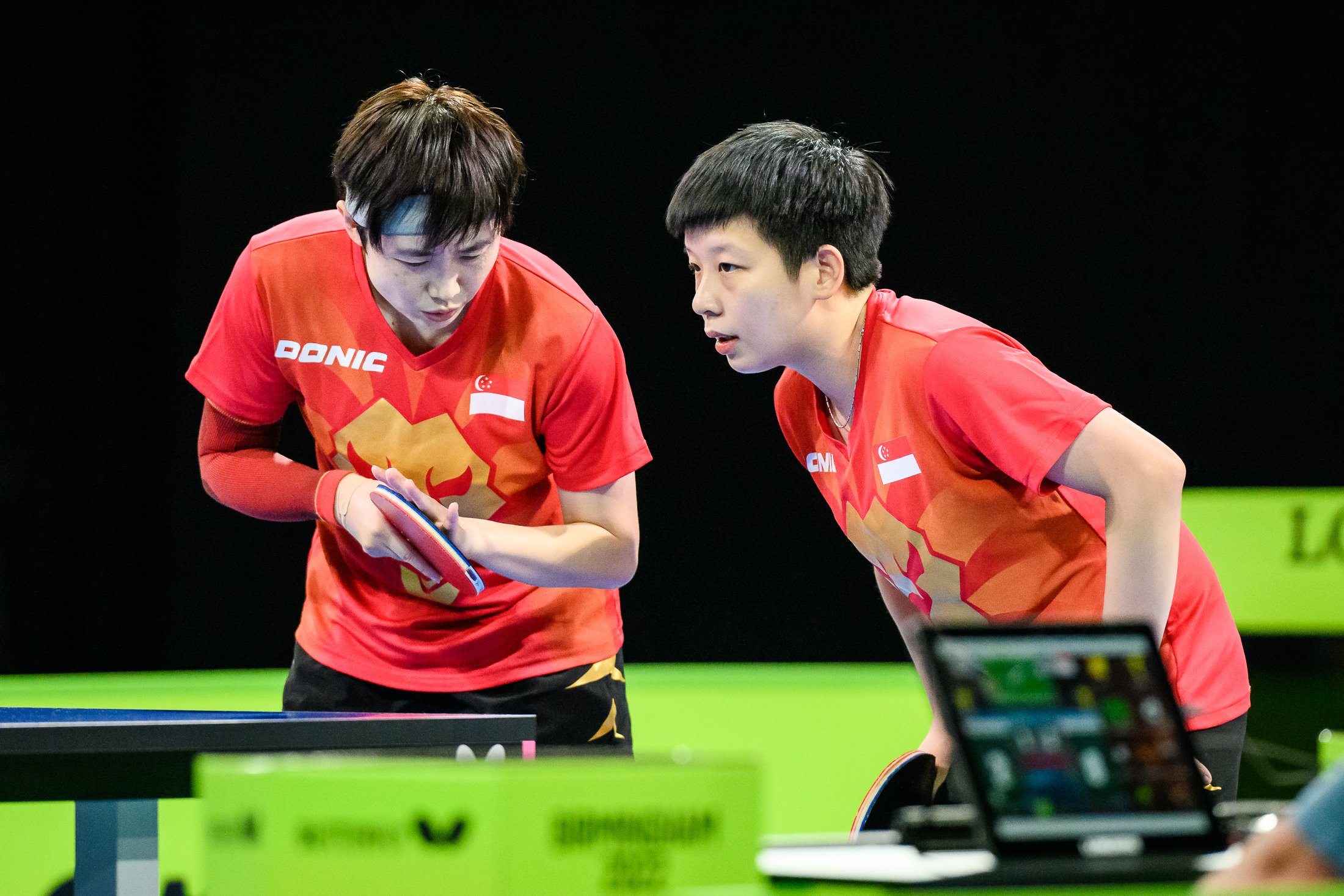 Feng Tianwei and Zeng Jian have only dropped one game en-route to the final of the Women's Doubles. Photo Credit: Commonwealth Games Singapore/Andy Chua

After their encounter in the Singles final, Tianwei and Zeng Jian will pair up in the Women’s Doubles to play Wales in the semis. The Feng-Zeng partnership found little trouble dismantling Australia 3-1 in the quarters despite dropping their first game in the Women's Doubles event.

The potential for another all-Singapore final beckons as Wong Xin Ru and Zhou Jingyi are in the other semi-final matchup after beating India 3-1, they will play Australia’s Jee Minhyung and Lay Jian Fang.

Zeng Jian will also find herself in the bronze medal match of the mixed doubles with Clarence Chew after their unsuccessful outing against Malaysia in the semis. They will play Australia’s Nicholas Lum and Jee Minhyung.

That will be the first of two bronze medal matches for Clarence, who is also involved with Ethan Poh in the 3rd/4th place playoff against Australia’s Nicholas Lum and Finn Luu in the men’s doubles.

In badminton, Loh Kean Yew was stunned by Malaysia’s Ng Tze Yong at the semi-finals stage of the Men's Singles with a 2-1 defeat. The top seeded Loh won the opener 21-15, but the 5th seeded Malaysian levelled things up in the second 21-14, before sealing the tie with a 21-11 score in the decider.  Next up for Kean Yew is a trip to Tokyo to defend his World Championship title.

Meanwhile Teh Jia Heng stays in the hunt for a medal after beating Jamaica’s Samuel Ricketts 22-20, 21-10. He will be facing the 2nd seeded Lakshya Sen of India in the semifinal. 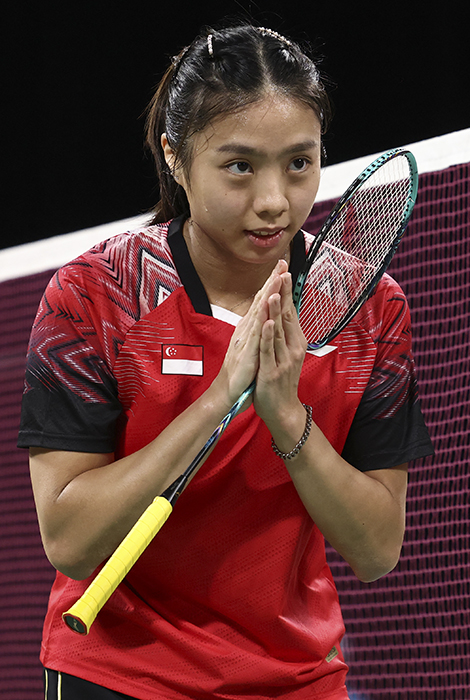 Yeo Jia Min also remains in the hunt for medal after beating Australia's Wendy Chen 21-15, 21-15 in the Women’s Singles in 39 minutes in the quarterfinal. She will play top seed Pusarla V. Sindhu of India next in the semi-finals.

A third medal opportunity in badminton is provided by the pair of Terry Hee and Jessica Tan in the Mixed Doubles. After dispatching New Zealand's Oliver Leydon-Davis
Anona Pak 21-11, 21-11 in the quarterfinal, the couple will take on Malaysia’s top seeded Tan Kian Meng and Lai Pei Jing.

In the Women's Doubles, Jin Yujia and Crystal Wong produced a commendable performance against Malaysia's Pearly Tan and Thinaah Muralitharan. The top seeded Malaysians took the first game 21-15, but Jin and Wong fought back in the second. At 9-9,  they put together a string of 9 straight points and took the game 21-11 to even the score. The two pairings were running neck and neck in the decider, but at 12-11, the Malaysian duo scored 5 consecutive points and went on to seal the game 21-15 to book their ticket to semifinal. 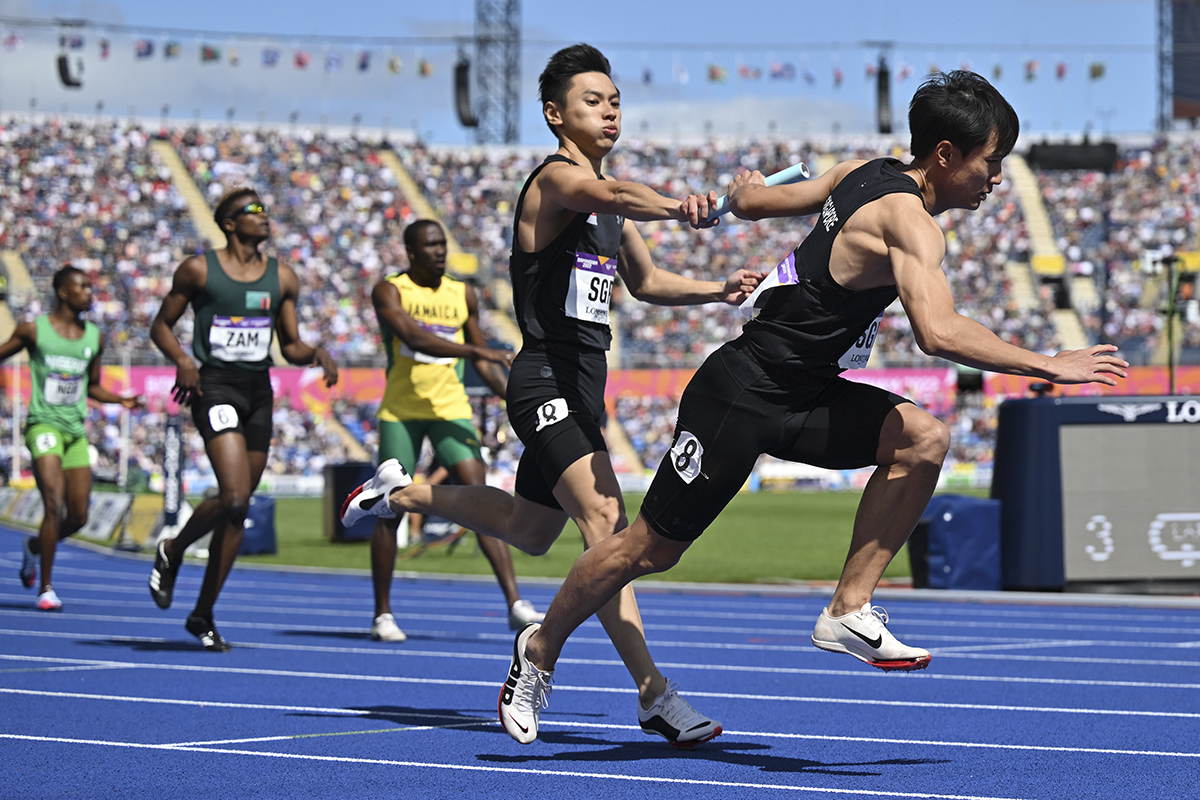 And in athletics, Singapore’s Men’s 4 X 100M Relay team has qualified for the final with a time of 39.95 seconds - the first time Singapore’s men’s relay team has made the final in the Commonwealth Games.  They recorded 40.14 seconds in 2010 and 40.05 seconds in 2014. The quartet of Marc Louis, Joshua Chua, Xander Ho and Ian Koe will want to give a good account of themselves in a historic final.

Meanwhile, the Women’s 4 X 100M Relay team of Shanti Pereira, Nur Izlyn Binte Zaini, Kugapriya D/O Chandran and Bernice Liew finished with a time of 45.58 seconds in the heats. The timing wasn't enough for the final but it shaved more than a second from our women's relay team timing (46.84 sec) in the 2014 Games.