Admiration and praise of the unique collaboration between ACS (Barker Rd) & Queensway Sec in NSG Hockey! 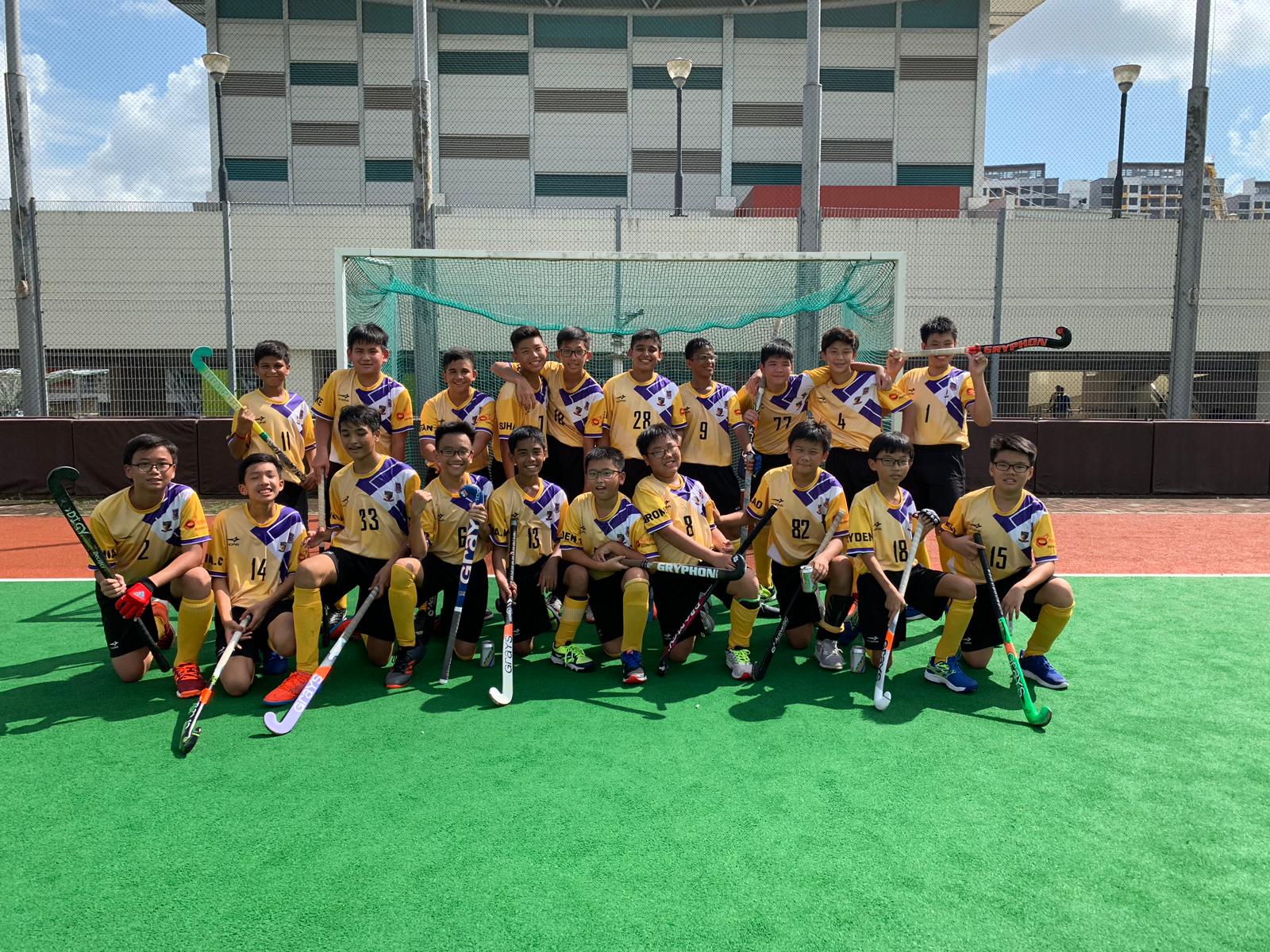 For Anglo Chinese School (Barker Road) and Queensway Secondary School - two schools with stark cultural differences located a 12-minute drive from each other, Hockey is something that brings both schools together!

While each school has had their long history of hockey dating back to the 1970s, it was only in 2018 that both ACS (Barker) and Queensway Secondary School (QSS) embarked on discussions to formulate the idea of a joint Hockey team, under the School Sports Partnership Programme. And this was with the aim of creating a model for sports collaboration between schools with their distinctive strengths but different backgrounds. A year later in 2019, both schools finally came together to form a combined school team - known as the ACSBR-QSS Hockey team! 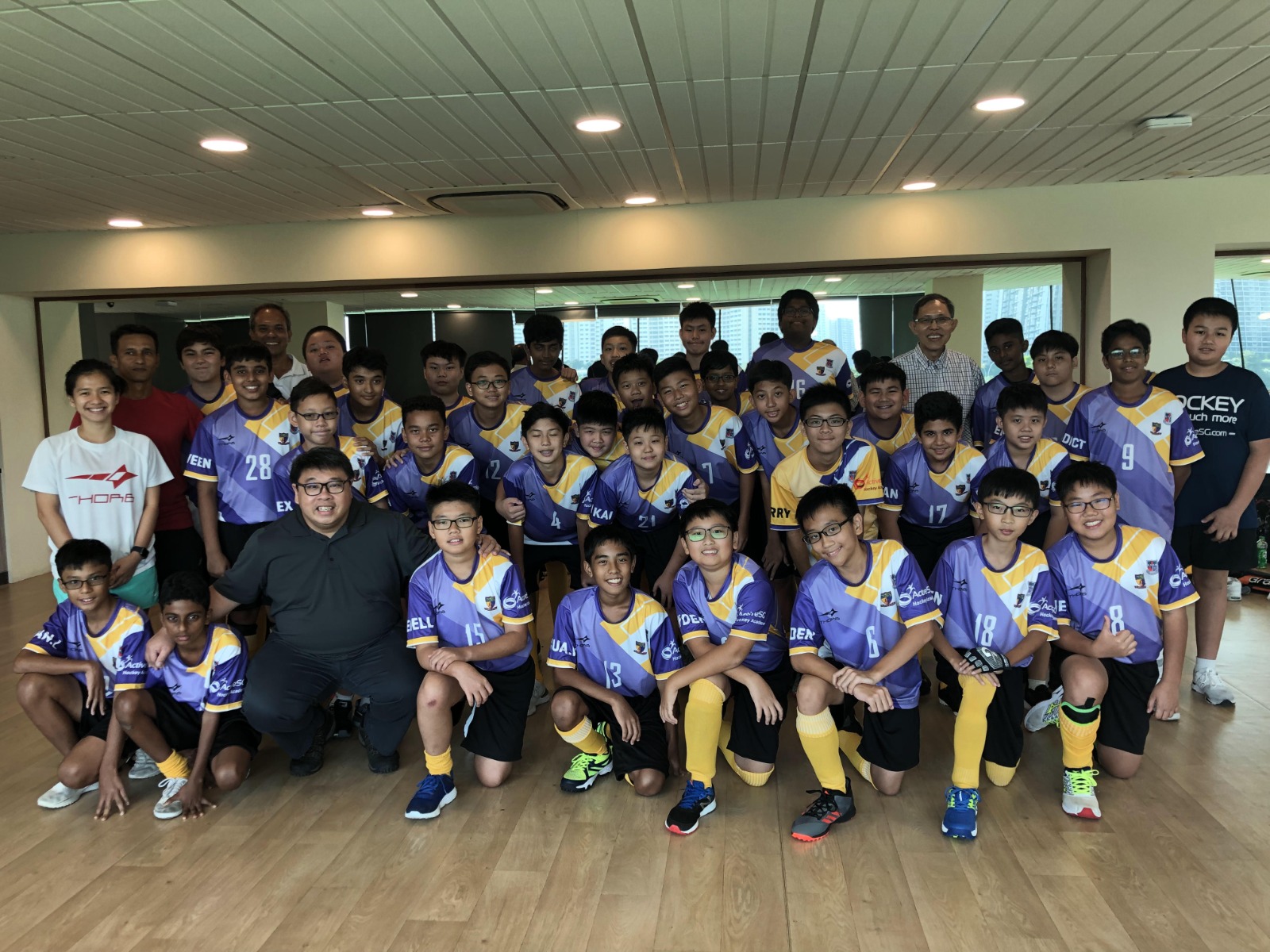 A joint initiative supported by both schools, the Ministry of Education (MOE) as well as ActiveSG, the ACSBR-QSS Hockey team receives coaching expertise, training venues and co-design training programmes by ActiveSG.

This unique synergy between both schools has given birth to opportunities for student-athletes of both schools to learn a new sport together, use sports as a leveler to build friendship, teamwork and camaraderie across diverse backgrounds, as well as build their social skills and empathy for peers.

As the ACSBR-QSS Hockey Team prepares for their opening NSG match in 2022, their respective teachers-in-charge, as well as 2 student representatives from each school addressed a few questions posed by Circle News (SportSG), via email and online interviews respectively.

During the recent March school holidays, we caught up with Surveen Singh Shahi (Captain, Queensway Sec School) and Chen Yi Sheng (ACS, Barker Road) via zoom recorded calls, to find out more about their thoughts, hopes and plans for NSG 2022! (Watch Interview Below!)

How long have you been in charge of Hockey in your school?

I was assisting the previous teacher IC, Ms Joan Anne Lim, with the programme since it started in 2019, but took over in 2020.

What is your fondest memory of your school’s Hockey team?

I would not consider them memories as these good moments are still happening now. It is actually seeing how the boys interact, train and play with each other regardless of the school they are from. I am also heartened when I hear them chat about their personal life outside of training. To me, the friendships that many of them forged outside of the field is an achievement as good as winning on the field.

During NSG in 2019, it was great to see how the team competed with one common identity. The boys wore a uniquely designed jersey which had the colours of both schools and gave their best for each other. Unfortunately, there was no NSG in 2020 and 2021 but we are certainly looking forward to see the boys coming together again for the competition this year!

Both ACS (BR) & QSS have always been strong and renowned for Hockey. How many NSG titles have your schools won over the years?

I understand ACS (particularly Anglo-Chinese Secondary School) was very active in this sport from the 1960s – 90s. ACS (Barker Road) did not have the CCA previously until the combined team with Queensway Secondary School.

In the 70s and 80s, Queensway Secondary School used to have a hockey programme. QSS was a regular top 4 contender in the Pasir Panjang District competition before advancing to the Nationals. The annual hockey season would open with the Inter-School 6-a-side Hockey Festival followed by the 11-a-side competition. QSS has won trophy positions at the District level in the 70s and 80s, but not at the National level. Our current hockey programme is in its 4th year only. We have not won any NSG Competitions…yet!

When did ACS (BR) and Queensway Secondary School come up with the decision to compete in the NSG as 1 team instead of 2 separate school teams, and how do you think it has benefited your students?

ACS (Barker Road) and Queensway Sec came together because both the Principals wanted to create a model for sports collaboration between schools with their distinctive strengths, but different backgrounds. The 2 Principals were in active discussion with SportSG and Singapore Schools Sports Council to formulate this unique partnership that is committed to ensure that the 2 schools will be represented by equal numbers of players from both schools and should the number of players increase, the 2 schools will then submit 2 teams for competition, comprising equal numbers of players from both schools. Discussions started in 2018 with both Principals of the school and ActiveSG to embark on this project under the School Sports Partnership Programme. ActiveSG would support the team by providing coaching expertise, securing training venues and co-designing the training programme. 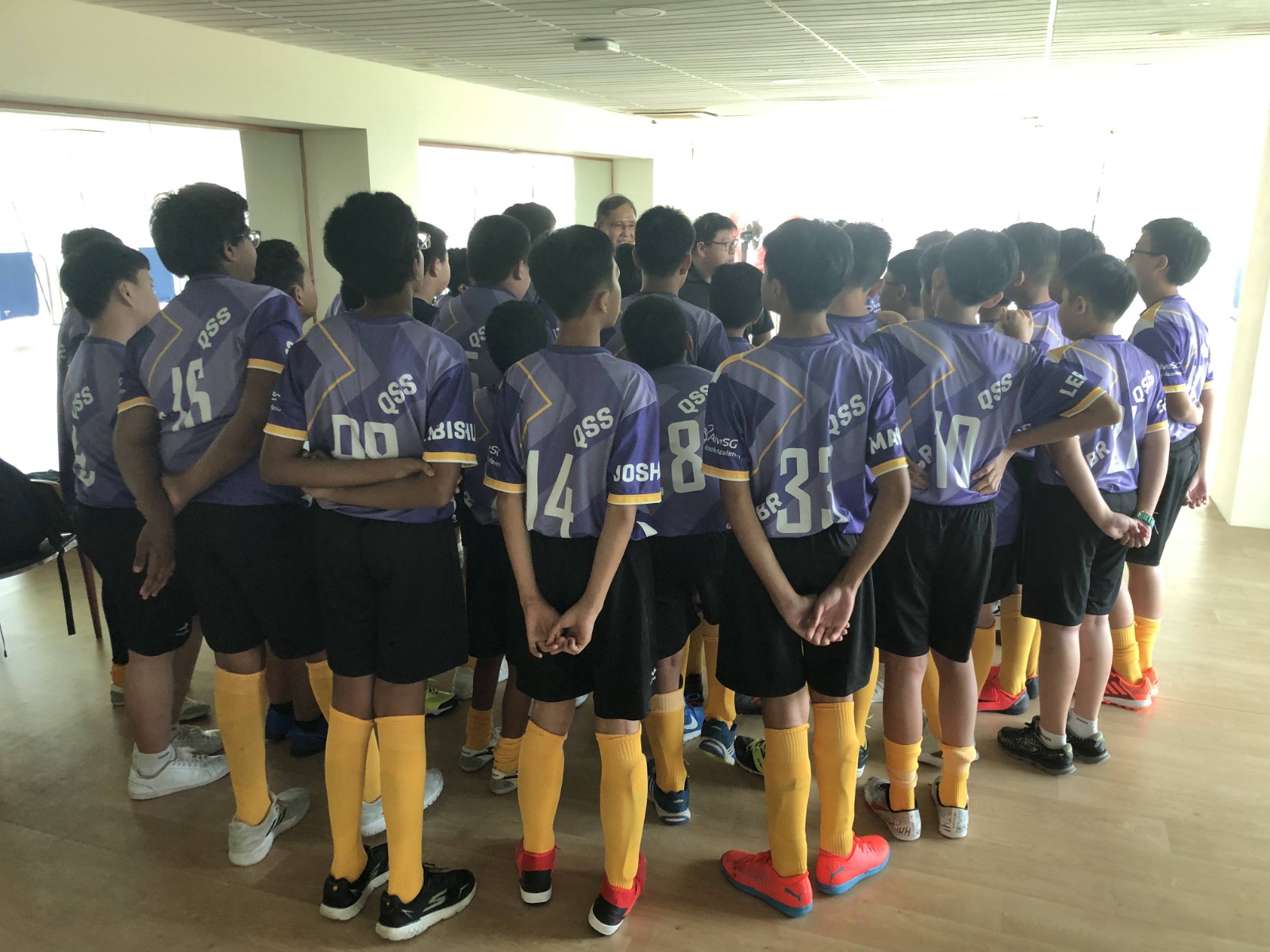 The objective was to provide an opportunity for students from both schools to learn a new sport together and use this platform to build friendship, teamwork and camaraderie across diverse backgrounds. The choice of Hockey was intentional as most or all of the students would probably not have any background in sport and have the starting point. With students from different schools coming together, this programme also allows the development of social skills and empathy for peers.

Seeing how the boys interact both on and off the field makes me believe that the students have benefitted from this. To me, what this programme has provided the students with is a true and genuine reflection of the society. There is diversity in all of us (race, religion, family background or school), but with effort and commitment, we could still shine on a level playing field even if we have different starting points.

In the context of this team, there were certainly differences as some students could afford their own Hockey sticks or wore better shoes. But thanks to our partner, ActiveSG, they ensured that everyone was well-equipped enough by providing the necessary equipment so that the students could focus on training and becoming better.

Was the partnership successful immediately from the first year? Or how have both schools worked together to improve the team’s performance over the years?

There were definitely challenges at the start. But we managed to overcome them as the teachers and coaches worked together to ensure that we spoke a common language and had similar expectations on everyone. Both schools were also deliberate in some of our actions like providing a common attire, grouping, ensuring an equal recruitment of new students and having an equal representation during NSG.

In the first few sessions when the students trained in their own PE attire, we noticed that students from the same school would always stick together. We then provided them with a common training attire and this made the difference less distinct. In order to make the boys socialise and break the barriers between them, we made it compulsory for the boys to partner up with someone from another school. The coaches also made sure that there were students from different schools in the groupings.

There was also the issue of equipment inequality as some students could afford their own Hockey stick and turf shoes while the rest had to use the ActiveSG sticks and wore school shoes. We had to process this with some of the students that this was simply the reality but reminded them that what mattered most would be their effort and commitment to training regardless of their equipment.

Of course, one of the biggest challenges we faced the past two years was the suspension of combined training due to COVID. It was really like a long distance marriage but we managed to keep it going with combined sessions on Zoom. We are glad things have finally resumed and we are making up for lost time with a bonding and training camp during the March holidays.

Do you think this partnership will continue in time to come?

Using the similar analogy in Question 5, this ‘marriage’ can only get better if tended to properly. Allowing students from diverse backgrounds to mix and learn from each other, has to be a deliberate effort and not left to chance. The stakeholders involved must continue to believe in this programme and put in the hard work to keep it going not just for the sport, but also for the development of social-emotional competencies in our students. 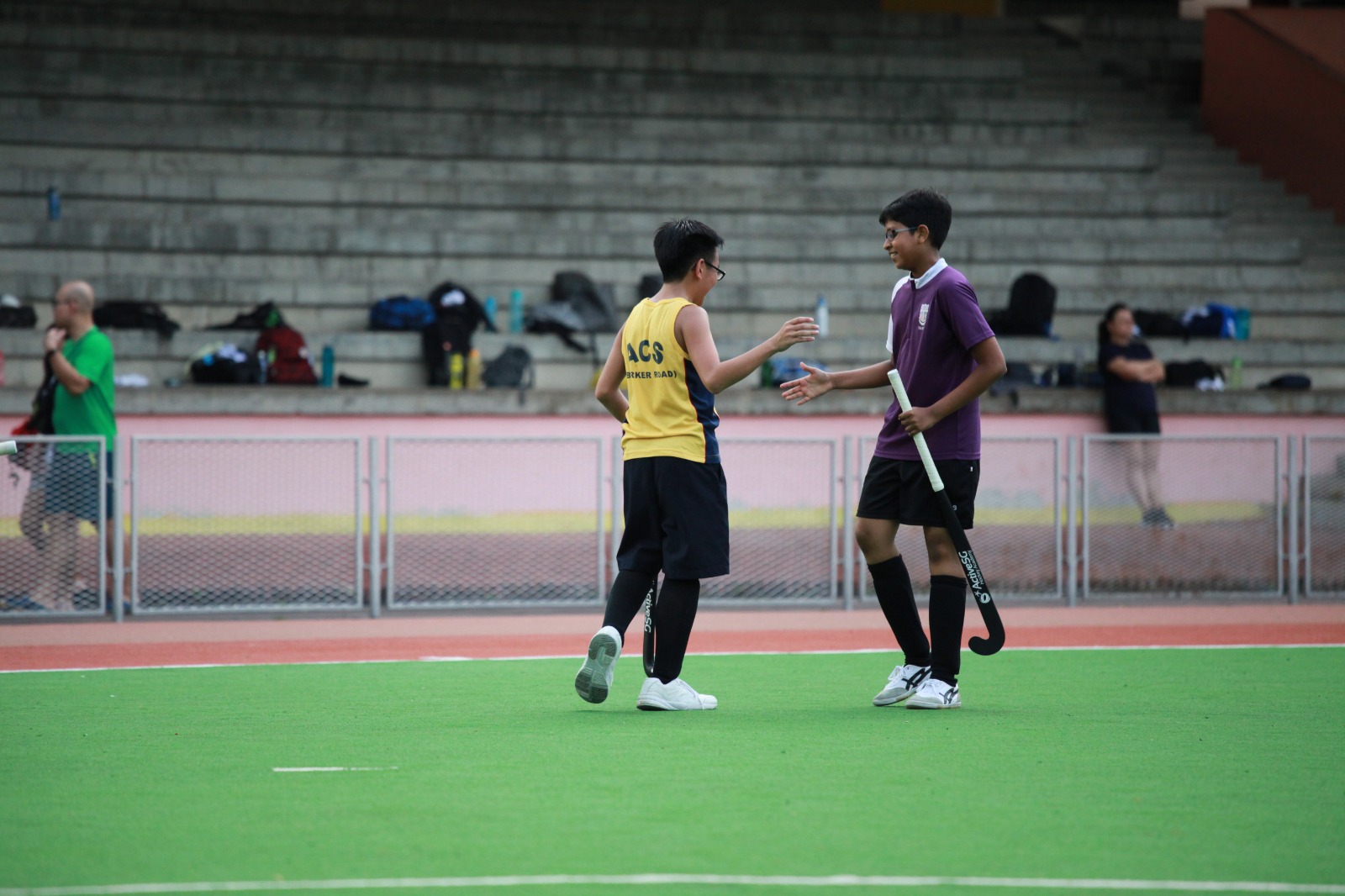 Sport Singapore would like to Thank the school principals, students, teachers and parents from ACS (Barker Road) and Queensway Secondary School, for their kind assistance and responses towards this NSG preview. This article would not have been possible without their invaluable input and comments. And we wish the ACSBR-QSS Hockey team, the Best of Luck, Success and Safety in their 2022 National School Games campaign :)