Mark Cavendish (in green) headlines 32 riders from 8 of the world's best professional cycling teams that will compete in Singapore. PHOTO: AMAURY SPORT

The Tour de France Prudential Singapore Criterium marks the arrival of cycling’s most prestigious brand in the region. The race will take place from 29 to 30 October, on a specially-designed street circuit in the heart of the city and features 32 riders from eight of the world’s best professional cycling teams including decorated British cyclist Mark Cavendish, who holds the joint record for the most Tour de France stage wins (34). Memorably, he secured four Tour de France stage wins last year. Cavendish is also widely regarded as the sport’s greatest sprinter, with four world titles (three in track cycling and one in road) and an Olympic silver medal.

Mark Cavendish said: “Tour de France Prudential Singapore Criterium marks a few firsts – a first Tour de France road race in Southeast Asia and a first race for me in this part of the world. Cycling has given me so much and is a great part of my life. It’s a privilege for me to do what I love and I’m looking forward to getting out there and to share the adrenaline, excitement and fun that comes with criterium racing.”

The Tour de France is the pinnacle of professional cycling – watched by over a billion viewers annually. Elite cyclists compete in a gruelling test as they cover an average of 3,500 kilometres over three weeks in their quest for sporting glory. In contrast, the Criterium is a shorter race on a closed circuit, which makes the format more suited to Singapore streets. The Tour de France Prudential Singapore Criterium race weekend will comprise races for both professionals and amateurs and is expected to reach  millions of viewers through a variety of international broadcasters.

Tour de France Director Christian Prudhomme said: “The Tour de France Criterium is a cycling performance, showcasing the speed and intensity of cycling through a race on an inner-city circuit. The Criterium format allows us to bring an adaptation of the Tour to more places, while still retaining the essence and spirit of the Tour De France with top riders in the heart of the city.

“With the Tour de France Criterium, cycling becomes a cultural bridge, celebrating the Tour de France atmosphere in territories the race has not yet explored. Given Singapore’s geographical location and reputation for organising great events, not to mention its enthusiastic cycling community, it was a natural choice for introducing this Criterium format to the entire Southeast Asian region. It will be a very exciting first trip to Southeast Asia for the Tour de France, and we’re looking forward to sharing the experience with the community here.”

Commenting on being part of the inaugural Singapore Criterium, Mr Dennis Tan, Prudential Singapore’s CEO, said: “As a leading life insurer, we want to support Singaporeans in leading healthier lifestyles, so we can all live well for longer. We decided to promote cycling because it is an accessible and sustainable sport. This sponsorship is a great opportunity to encourage people and families from all walks of life to bond while staying healthy and active.”

The event is supported by the Singapore Tourism Board. Mr Keith Tan, Chief Executive, Singapore Tourism Board said; “We are delighted to be the first Southeast Asian country to host the Tour De France Criterium, a premier sporting event that reinforces Singapore’s position as a leading destination for sports in the region. Cycling is an environmentally-friendly sport that is popular with locals and visitors, and events like this strongly align with Singapore's sustainability goals, as well as our ambition to be an urban wellness haven. As we welcome more visitors to Singapore, it is also a timely addition to our exciting calendar of events.”

The Tour de France Prudential Singapore Criterium is being promoted by TEG Sport in conjunction with Evoke EXP.

Geoff Jones, Group CEO TEG said: “TEG Sport is proud to be working with the iconic Tour de France brand on what will be a world-class and exclusive new major event for Southeast Asia. We look forward to welcoming some of the world’s best professional cyclists to take part in the dynamic criterium format raced through spectacular central Singapore. Whether you’re a cycling enthusiast, a recreational rider or major events fan we encourage you to get involved in this exciting new event. On behalf of TEG Sport, I would like to thank the Singapore Tourism Board and Prudential Singapore for their partnership to bring this innovative global event to fruition.”

Visit www.singaporecriterium.com for more details on how to get involved and register your interest for the latest updates about the Tour de France Prudential Singapore Criterium. Latest updates are also available on Facebook and Instagram. 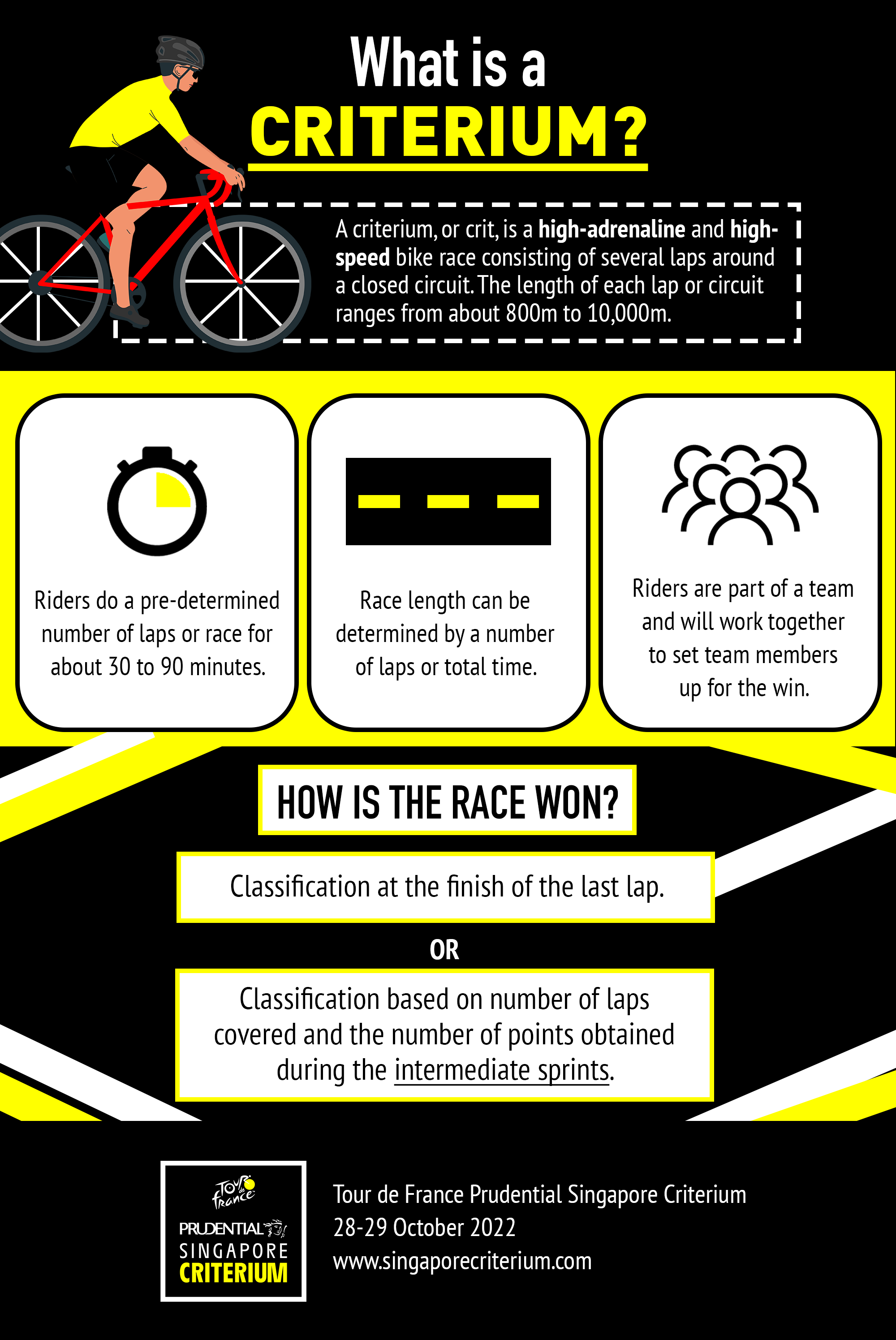