(Team Singapore's contingent at the Parade of Nations in the Opening Ceremony of Hanoi 2021. Photo Credit: Sport Singapore/Andy Chua)

It took a wait six months longer than expected, but Team Singapore’s campaign at the 31st Southeast Asian (SEA) Games officially began on Thursday (May 12) as the contingent marched into the opening ceremony.

Heavy showers earlier in the afternoon made way for clear skies in time, allowing fireworks to form a stunning backdrop over the My Dinh National Stadium to usher in the May 12-23 event.

The postponed Games, centred around Hanoi and taking place in 11 nearby provinces, was delayed due to the Covid-19 pandemic. Still, it has done little to dampen the spirits and drive of Team Singapore athletes. Already, Singapore has 1 gold, 4 silvers and 3 bronzes to its name on the medal tally, courtesy of diving and silat.

A group of 31 athletes and officials from athletics, archery, billiard sports, esports, jujitsu and silat was led into the stadium by silat world champion and flag-bearer Sheik Farhan. In the stands, some 100 secretariat and support staff cheered them on.

The Republic will be represented by 425 of its sporting best across 33 sports, with debutants as young as 14 (Max Lee, diving) and veterans as experienced as 54 years old (Peter Gilchrist, billiard sports).

While the athletes have had to hold an extra 6 months to compete, Vietnam has waited almost 20 years – this is just the 2nd time it's ever hosted the biennial Games, after the 2003 edition. 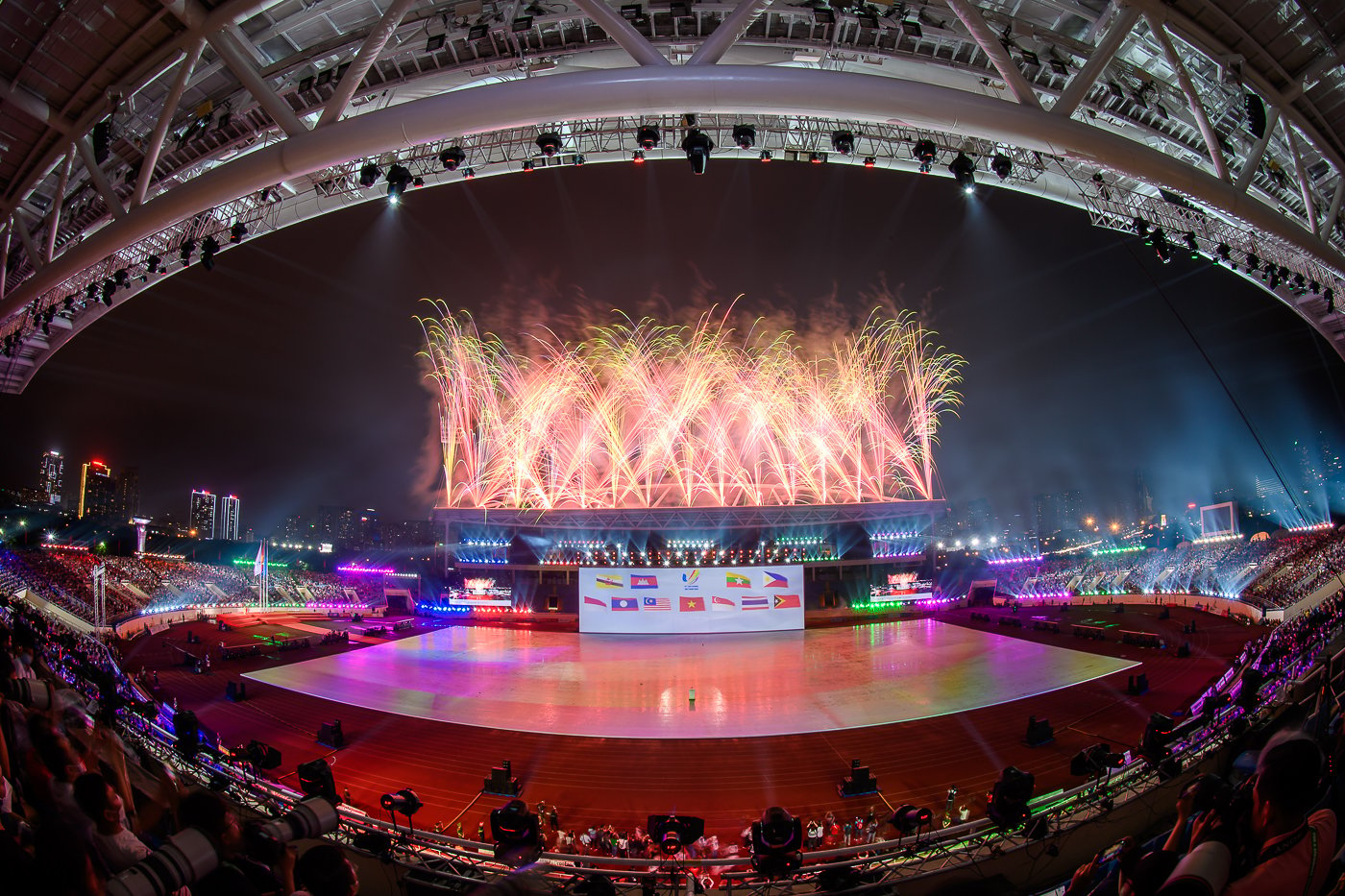 The host country’s enthusiasm shone through, in an Opening Ceremony programme that showcased Vietnamese culture and tradition, with performances that emphasised the Games’ theme: For a stronger Southeast Asia.

An ensemble performance of the official song, “Let’s Shine”, also reflected a theme that has run through these Games since it began in 1959 as the Southeast Asian Peninsular Games: unity and solidarity among the region’s nations.

Advanced technologies like augmented reality and extended reality were also employed for the opening ceremony, making for a grand visual spectacle for the 20,000 spectators in the stadium, but also those taking it in through their screens and in the vicinity of the stadium. 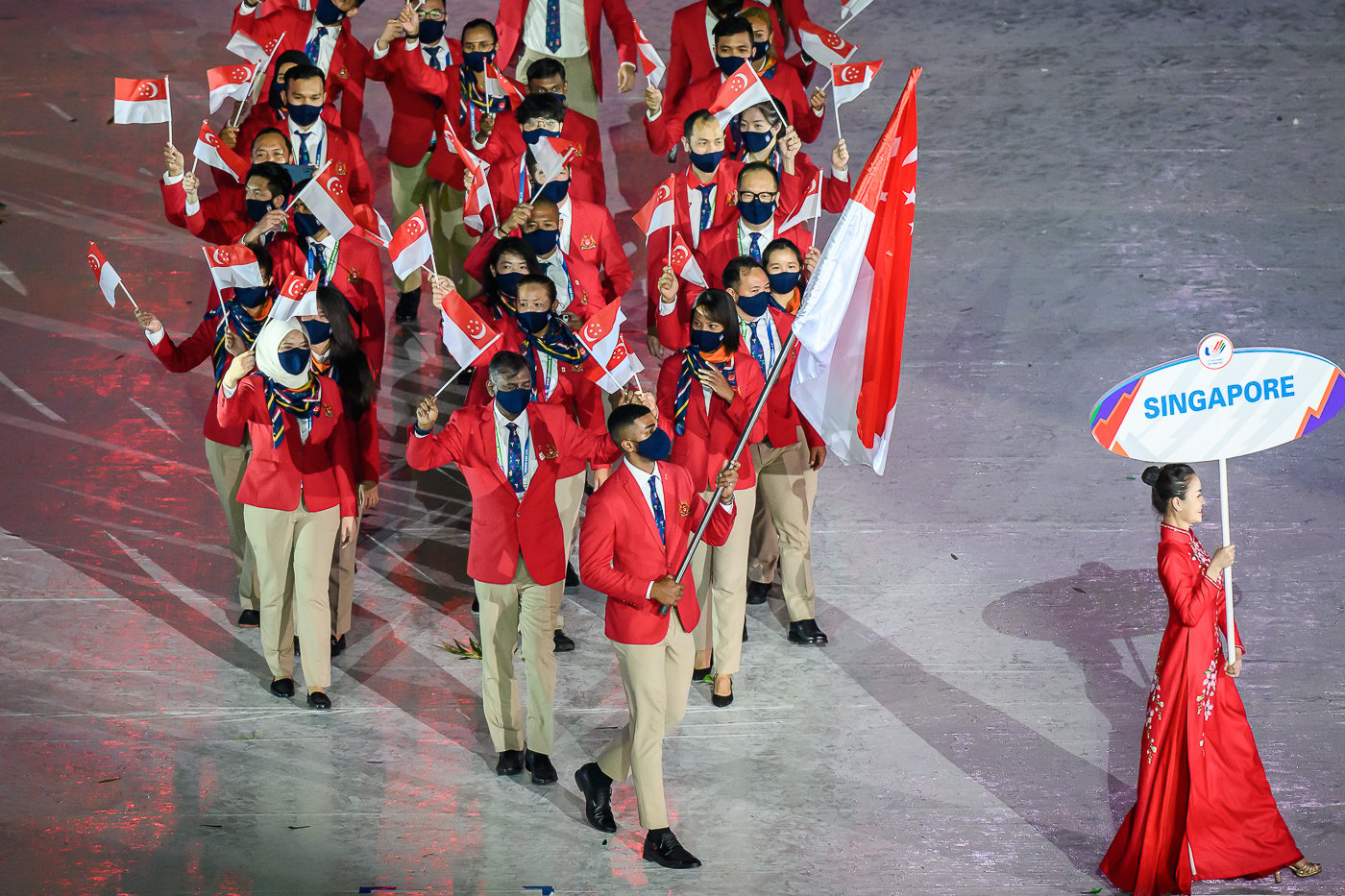 As a 3-time world champion, Sheik Farhan has seen his fair share of momentous events. But walking out onto the stadium’s centrestage with the Singapore flag in his hands was still a feeling like no other.

Said the 24-year-old: “The past two years have been tough. It’s hard to believe that after three years, we are here at the SEA Games. Walking with my teammates and fellow countrymen into the My Dinh Stadium felt surreal. I felt immense pride carrying the flag for my nation.

“I am filled with joy to represent my country and even more so alongside the athletes from various sports.”

Chef de mission S Sinnathurai, himself a multiple SEA Games medallist in taekwondo, knows the emotion of being part of the opening ceremony and the honour of competing for one’s country.

He said: “It has been a good start to Team Singapore’s campaign in Hanoi. Our diving and kickboxing teams have competed and returned to Singapore safely. Many athletes have also arrived and are settling in well with the help of the organisers and volunteers.

“We are hopeful that this evening’s spectacular opening ceremony will set the stage to an exciting SEA Games in Hanoi in the coming weeks ahead.”