Singapore and Indonesia locked in 1-1 draw, at the end of 1st leg Semis clash in AFF Suzuki Cup 2020! 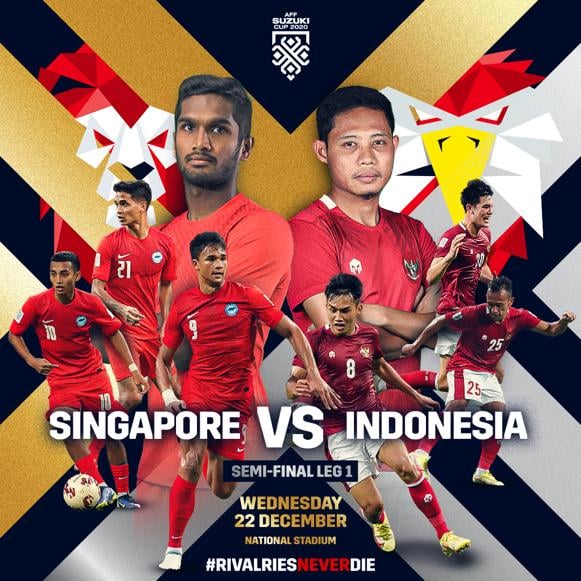 It was Singapore's very 1st Suzuki Cup Semi-final match in almost 10 years. Their last trip was in the 2012 campaign, when our Lions went on to win their 4th regional trophy. And this evening (22 Dec) ,in front of a 10,000 sold out crowd at the National Stadium, the Republic and Indonesia played to a 1-1 draw in the first of 2 legs!

Over the last 4 AFF campaigns, both teams had met each other on 3 occasions with the Indonesians holding a 2-1 win/loss record over the Lions. And the Singapore side went into the 1st leg clash of the 13th edition of the biennial tournament, on the back of a 2-0 defeat by Thailand, in their penultimate group match last weekend. As for the "Garuda" (nickname for Indonesian football team), they demolished Malaysia 4-1 and finished top of Group B, with defending champions Vietnam in 2nd place and sending them to face 5-time winners, Thailand in the 2nd Semi-final matchup! 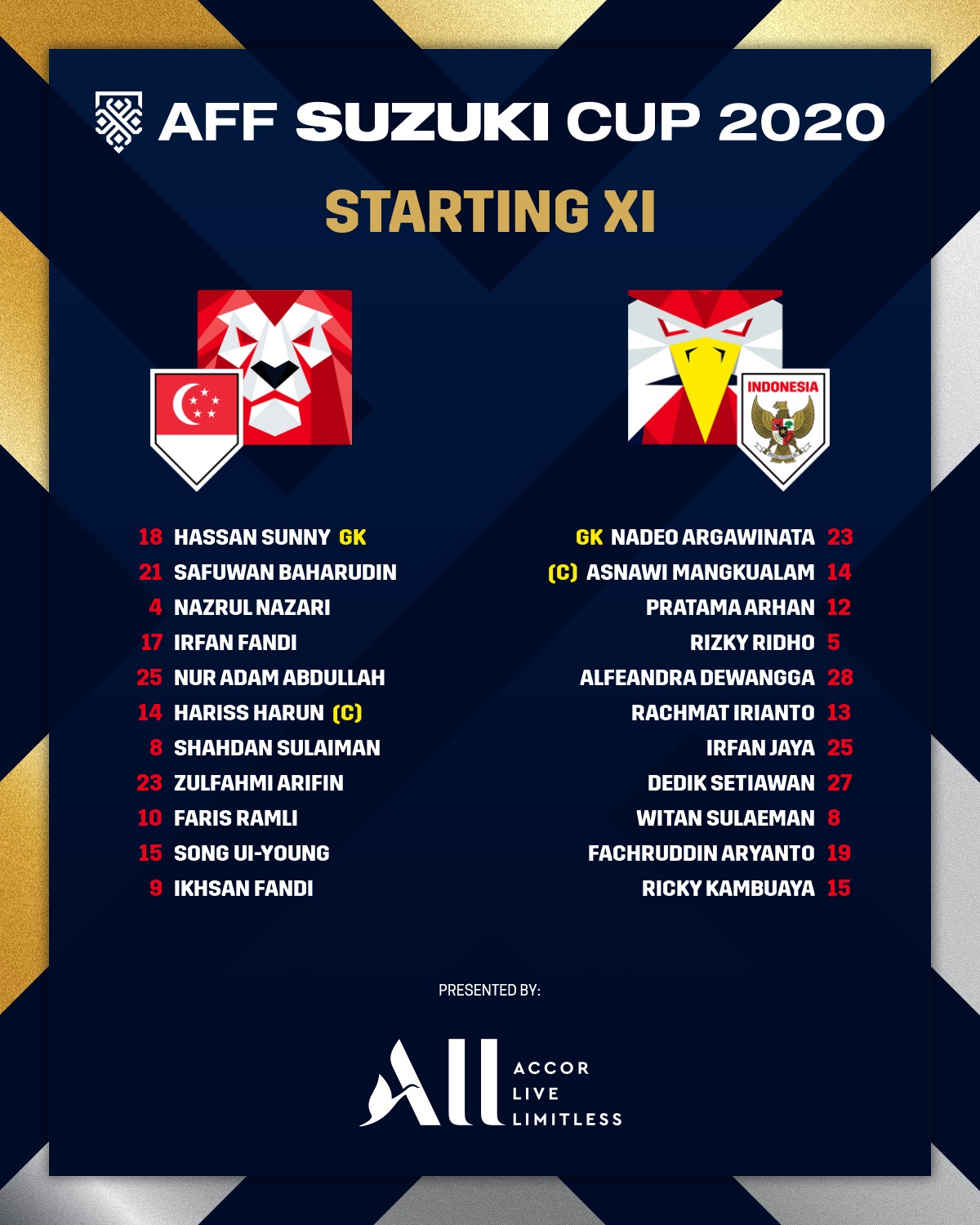 Singapore's head coach Tatsuma Yoshida had to face the harsh reality of injuries, after losing Gabriel Quak and Shakir Hamzah in his last two matches. The squad was down to 26 players on paper. And considering how some of the fans reacted to the Lions’ loss against the War Elephants (Thailand), Tatsuma was under pressure to perform. Hence, Song Ui-young, Nur Adam Abdullah, Zulfahmi Arifin and Nazrul Nazari were selected for the starting 11 – clearly indicating the intention for Singapore to use their pace to get the goals, or at least match the quality of the Garuda’s frontline.

The home side which adopted a 3-4-3 formation, kicked off the game with much confidence – very compact at the back while pressing the visitors in their own half. This tactic did not allow Indonesia the time and space to play their brand of football, and it didn’t take long for Singapore to register their first real chance.

Ui-young broke free on the left-hand side with speed to beat his marker before releasing a cross into the box. The long pass was too close to Indonesian goalkeeper Nadeo Argawinata and he eventually punched the ball away from goal. However, the clearance was only as far as Ikhsan Fandi. But the Lions' forward rushed his shot under pressure and couldn’t keep his effort on target.

The visitors were frustrated that Singapore kept disrupting their flow of play and they resorted to hard challenges to regain some form of dominance. With possession finally going in the way of the visitors, the Lions were caught napping in the 19th minute, allowing Witan Sulaeman space to shoot from the middle – he missed but 9 minutes later, he didn’t. 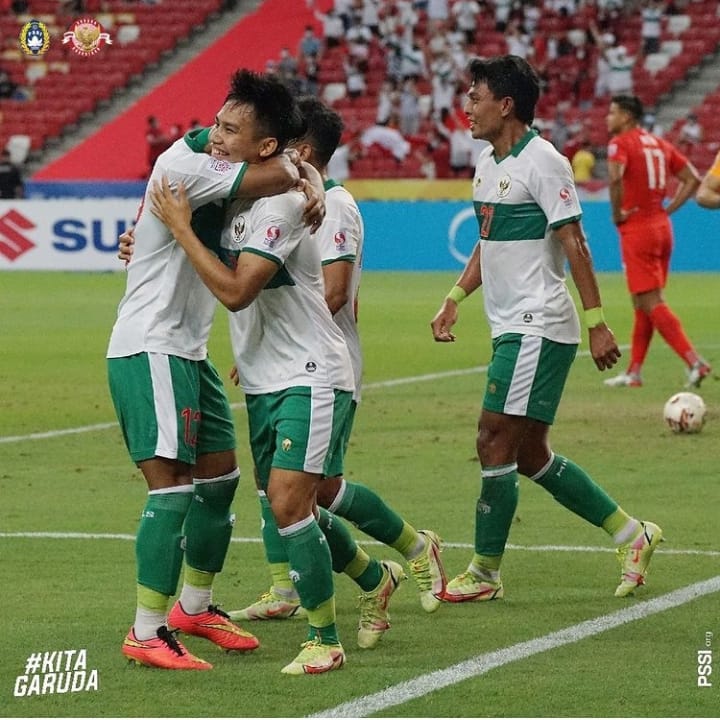 Lions' skipper Hariss Harun gave away possession to Asnawi Mangkualam in midfield and this sparked a clinical counterattack. Racing down the right flank, Asnawi linked up with Witan, played a couple of one-twos , with the second one releasing the latter to score from inside the box, with a left-footed shot into the bottom left corner. 1-0 to Indonesia after 29 minutes! 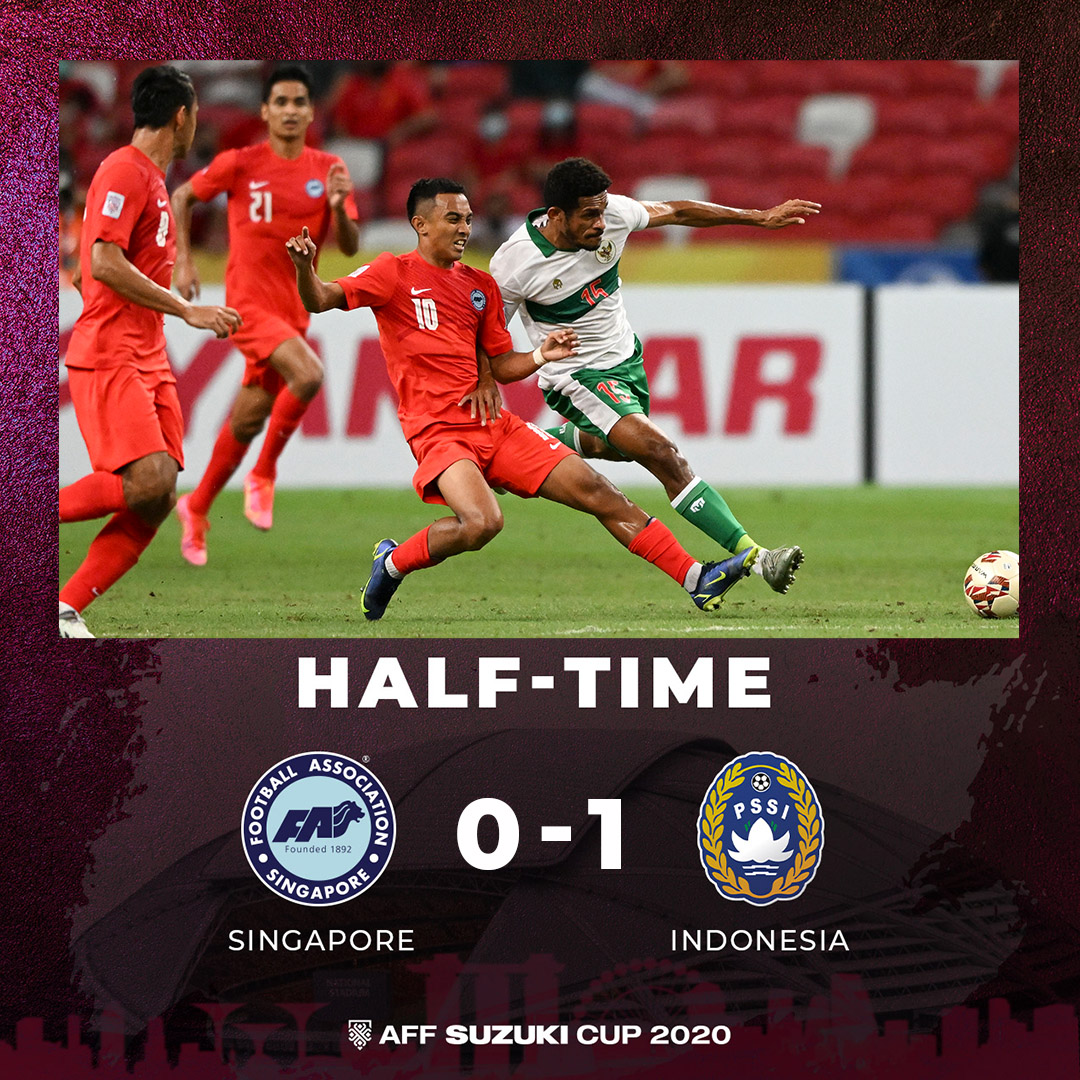 Slightly fluttered after conceding, Singapore took a foot off the pedal and survived a couple of Garuda attacks going into the break. At the start of the second half though, Anumanthan Kumar was introduced to assert some dominance in midfield – replacing Zulfahmi. And Indonesia on the other hand, brought on Ezra Walian and Elkan Baggott to spruce up their goal-scoring chances.

It was our Lions however, who displayed a more organised style of play – hanging on to ball with confidence while pushing more men forward. In the space of 6 minutes Ikhsan went head-to-head with Elkan twice – getting the better of his marker – and had a couple of missed opportunities too.

In the 70th minute, the home side finally made it count and found the crucial equaliser through none other than Ikhsan. At the end of a trademark Faris sprint, the winger released a defence-splitting through ball to release Ikhsan in the penalty box. And with only the goalkeeper to beat, the no 9 calmly dinked the ball into the net to level the score at 1-1 in the 70th min!

With everything to play for, both sides had opportunities to take the lead, but neither could find the finishing touch. However, Singapore can count themselves lucky to have avoided conceding a penalty in the closing 10 minutes of the match. That's when the referee awarded a freekick to the Garuda just outside the box, for a foul that was committed inside. 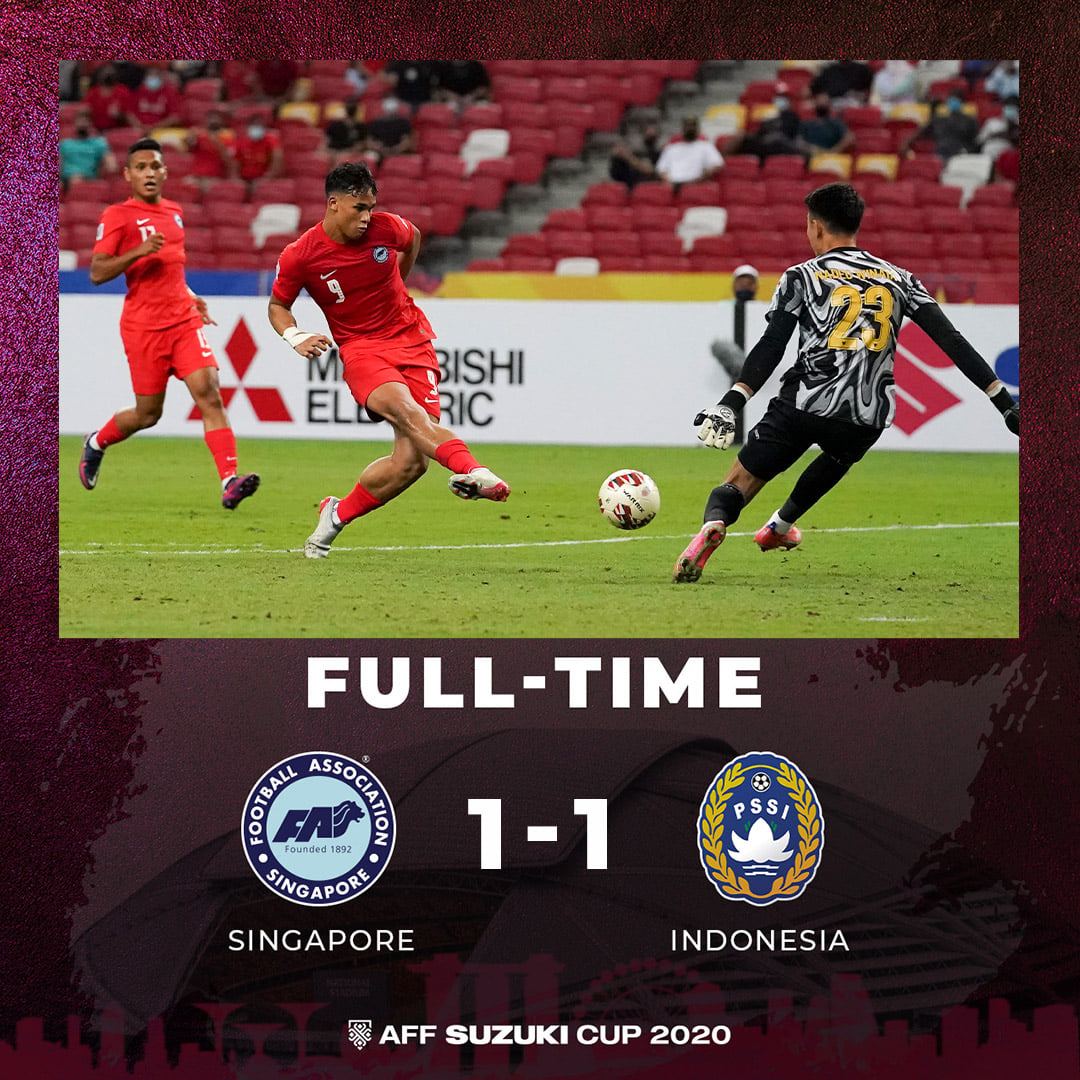 At full-time, the score line read 1-1. These two sides will meet again on Christmas Day (25 Dec) to play the second leg of the semi-final at the National Stadium. Lions Coach Tatsuma, in his post-match conference said, "I told the players at half-time that they must play (well) on the pitch. Don’t escape, don’t hesitate and that you have to show your full potential as a team and as individuals. Our performance was better in the second half." 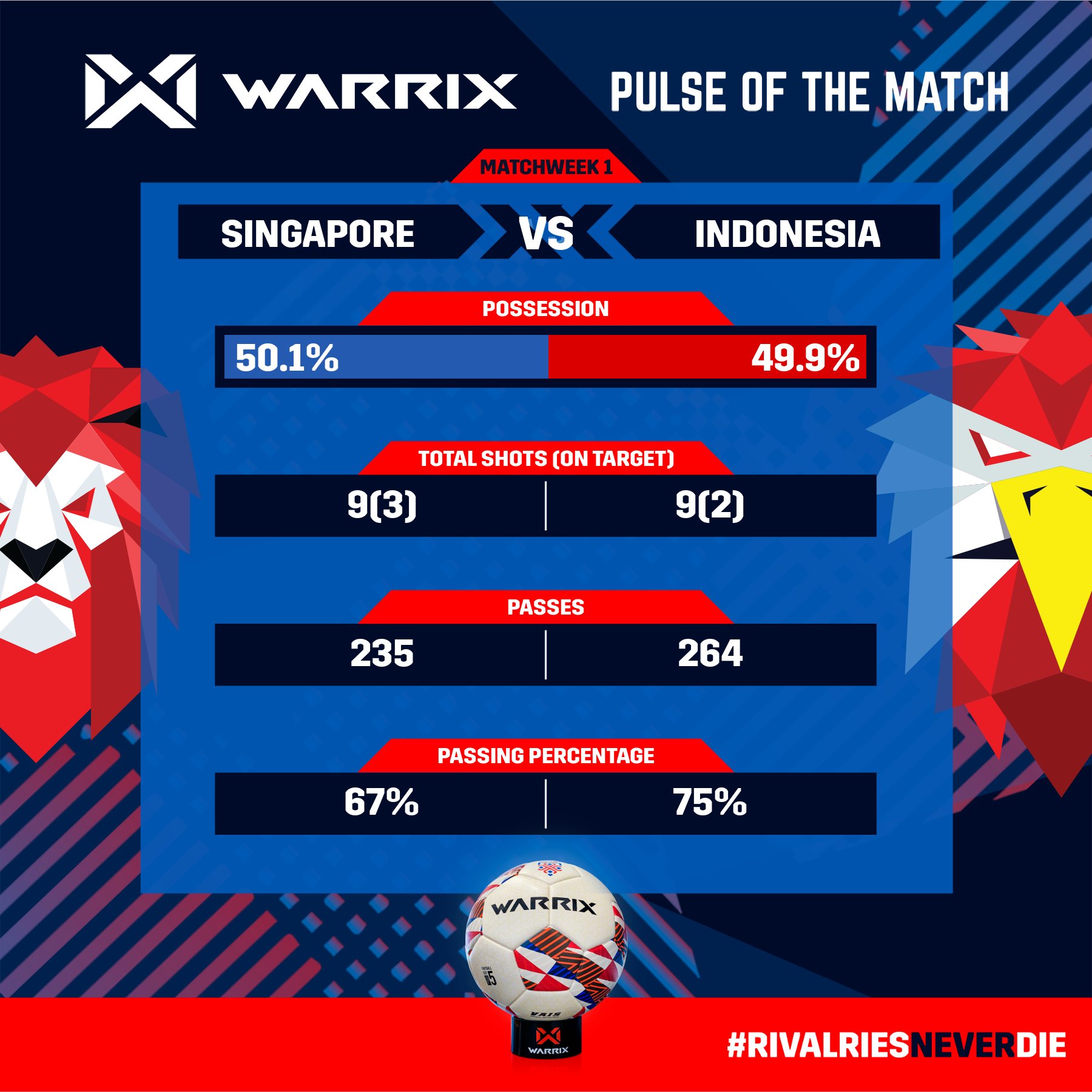