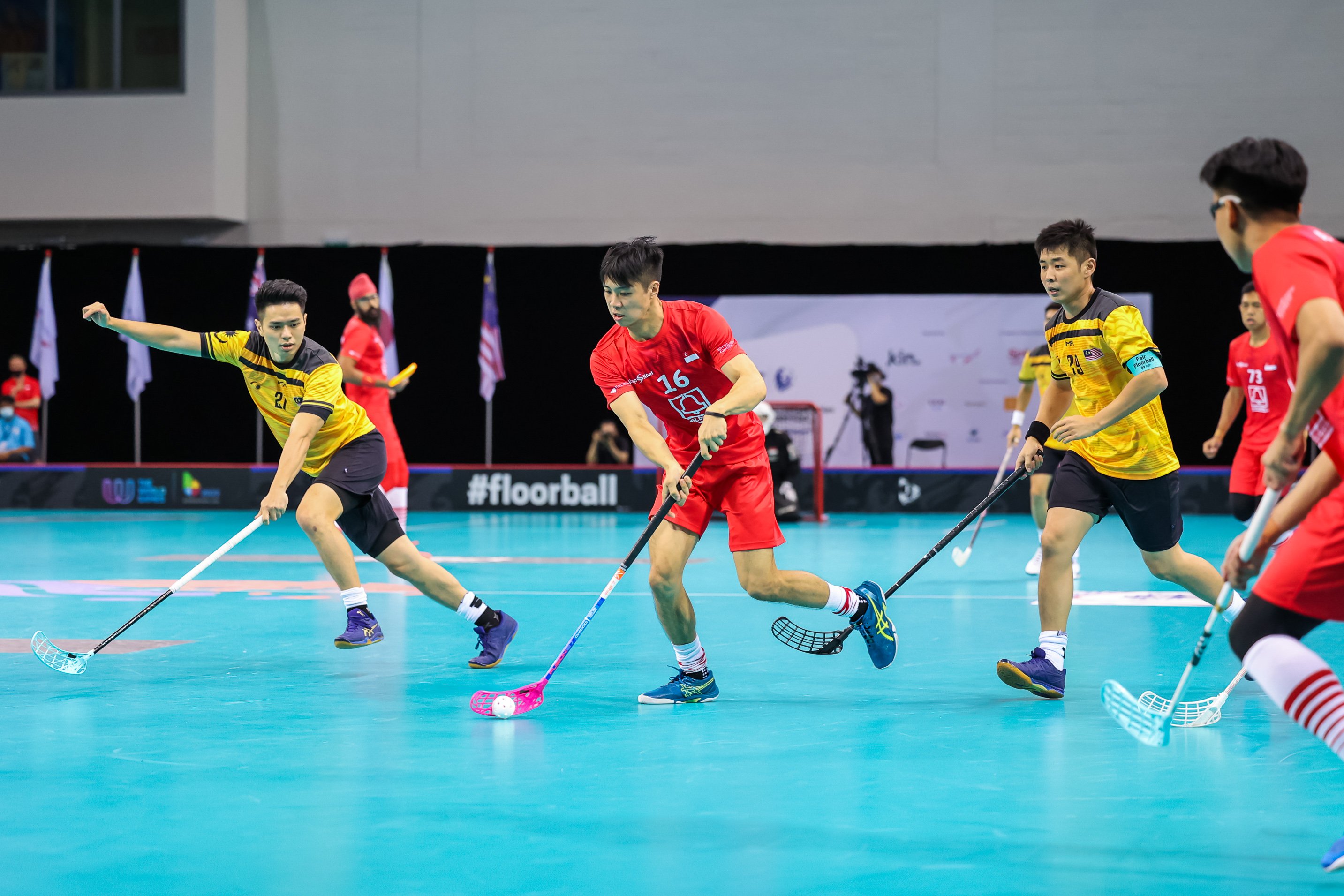 31 May 2022 - The Men’s World Floorball Championship Qualification-AOFC (Men's WFCQ-AOFC) kicked off today (31 May) in Singapore at the OCBC Arena with the hosts starting their campaign with an 8-2 win over Malaysia. The other matches of the day saw Thailand cruise to a 10-1 win over New Zealand while Australia, playing in their first official international match since 2018, secured a 4-2 win over Japan. The Philippines also defeated Korea 3-2 at the OCBC Arena.

Singapore’s 8-2 rout of Malaysia started off tight with both sides getting chances to attack. Singapore’s Player of the Match Foo Jun Wei scored in the 2nd minute of the first period, while Malaysia’s Mohan Divesh equalised less than a minute later. Ishwarpal Singh, who has represented Singapore in hockey, scored to give Singapore the lead. The hosts then elevated their play and reeled off a series of goals to surge ahead, and never looked back. 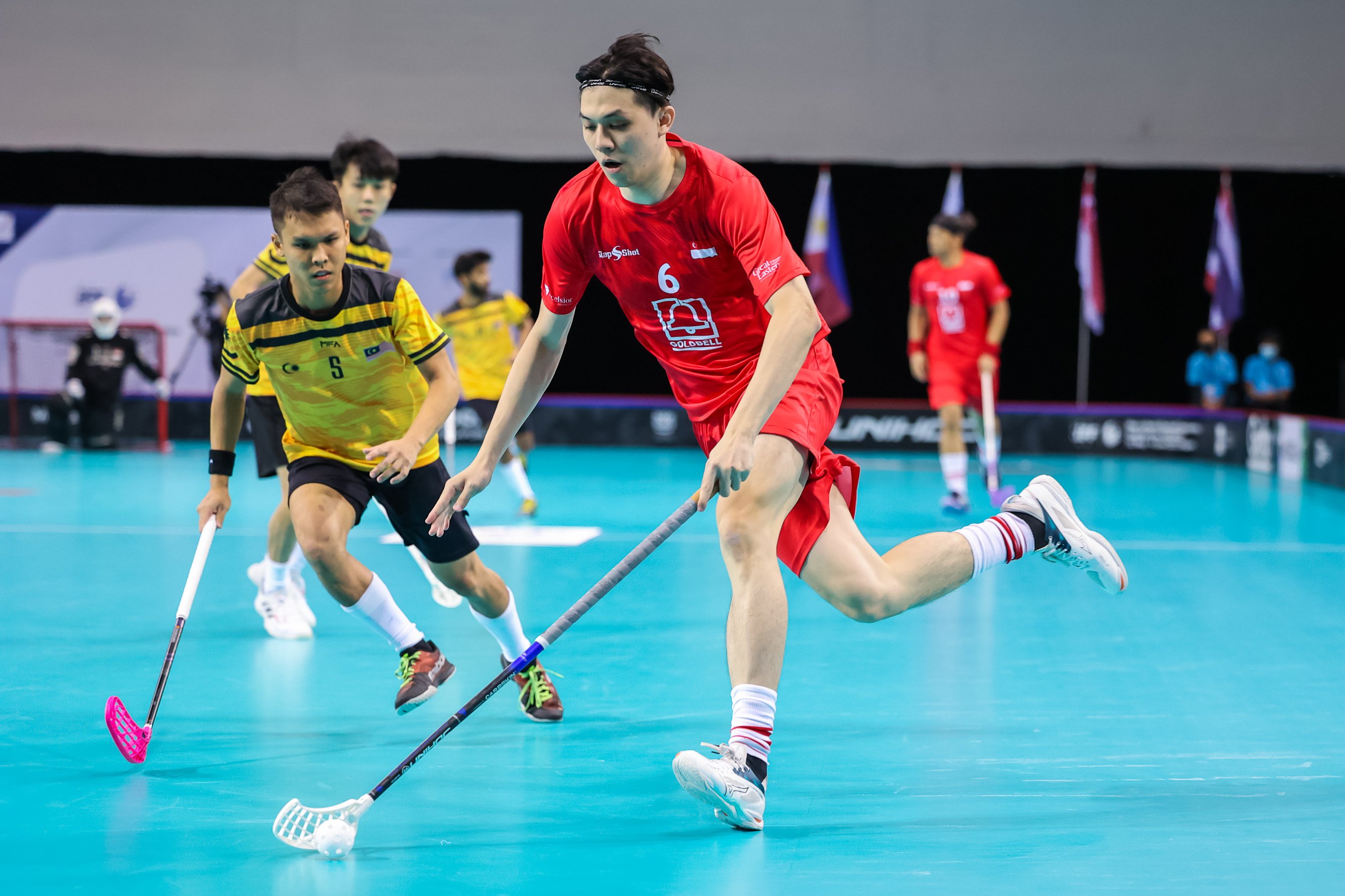 For Jun Wei, the highlight was scoring the opening goal that roused the audience at the OCBC Arena. He said: “When you walk out on the court, your fans cheer for the team, even during the warm-up and I think that's something that every athlete lives for. For us to experience that after so long is really beautiful and on top of that, our friends and family were also in the crowd cheering us on.

As for Team Malaysia, their Player of the Match Chong Han Keong said his team were caught off guard by the speed and pace of their opponents, but was pleased with the chance to compete. He said: “It means a lot to play floorball in Asia especially because we didn't have international competitions for two years due to the pandemic. It's a good starting ground for us to pick up the pace and continue raising awareness of floorball while improving as a team.” 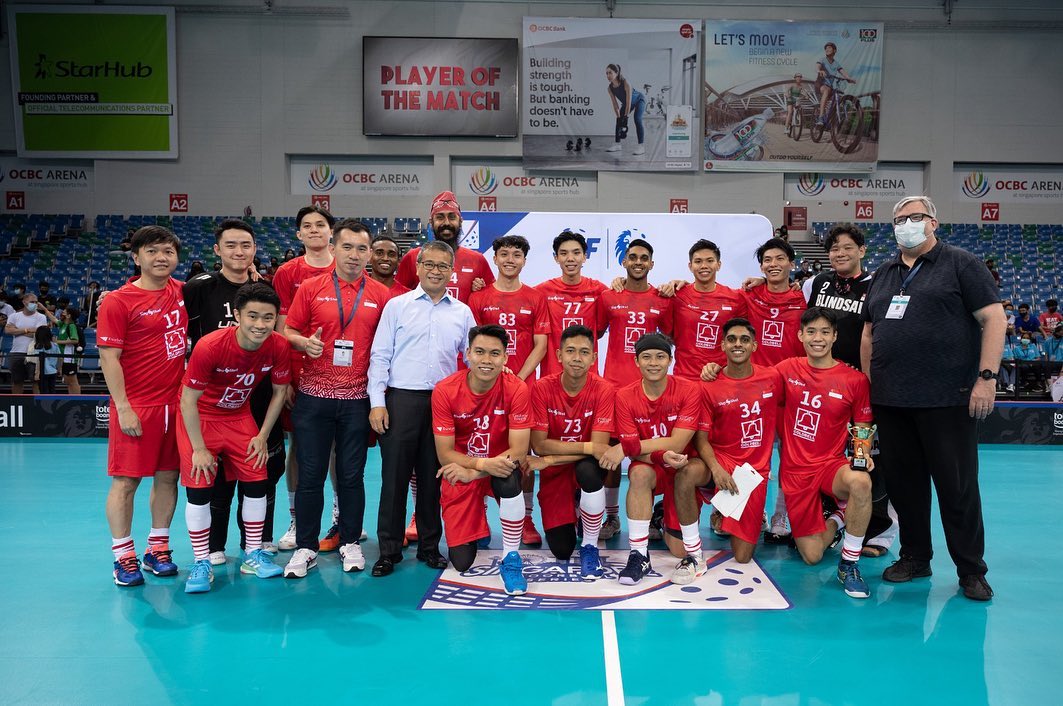 The first day of the Men’s WFCQ-AOFC also saw Australia return to international competition in style, triumphing 4-2 over Japan. Both teams delivered a thrilling display as the Australians took control of the match in the first period, with a 2-0 lead after goals from Tomas Gartner and Tobias Knox Lyttle. After a goalless second period, Japan quickly levelled the score in the final 15 minutes with two goals in 2 minutes. Australia responded equally swiftly with captain Daniel Gartner scoring in less than a minute to regain his team’s lead, and Gavin Staindl sealed victory. 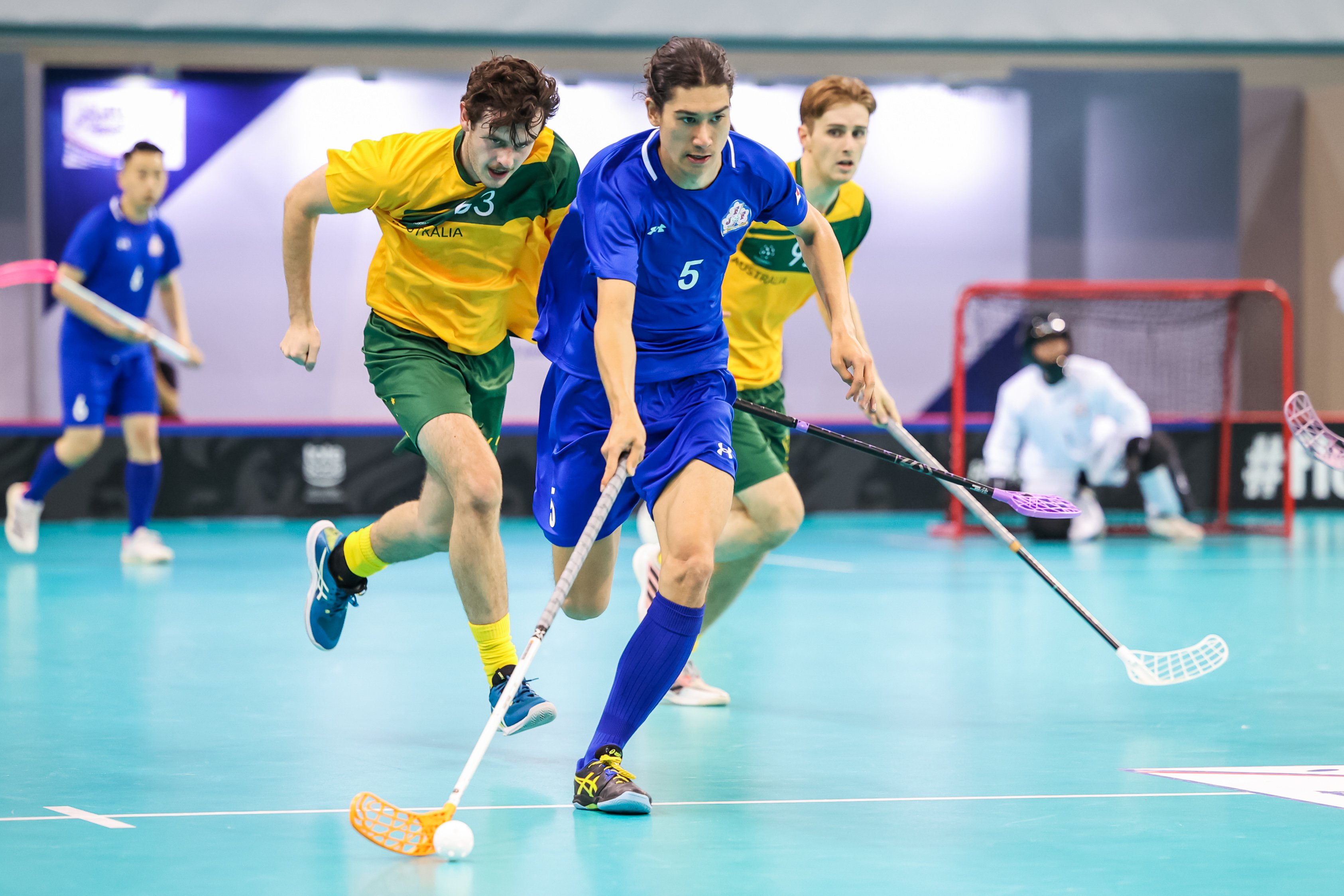 Captain Gartner, noting that it was Australia’s first official international game since 2018, admitted he was “a bit scared” before he scored. He added: “It feels amazing, half the Australian team hasn’t seen the other half for two and a half years, given the sort of massive distances between cities in Australia … We just didn't get a chance to train with each other so it's amazing to be back. I think it's a process to sort of get back on track with the team. We'll definitely improve every single day, so expect some good things from us.”

Japan’s Player of the Match Ramsauer Kenta, making his debut for Japan, said: “I'm very proud of the team, we played really well. We were 2-0 down and we never gave up, we had the spirit to win the game and we came back to 2-2, and unfortunately the energy was not quite enough to turn the match around for us. This is my first time playing for Team Japan so I'm very grateful and honoured. It's fun to play floorball at a level like this.” 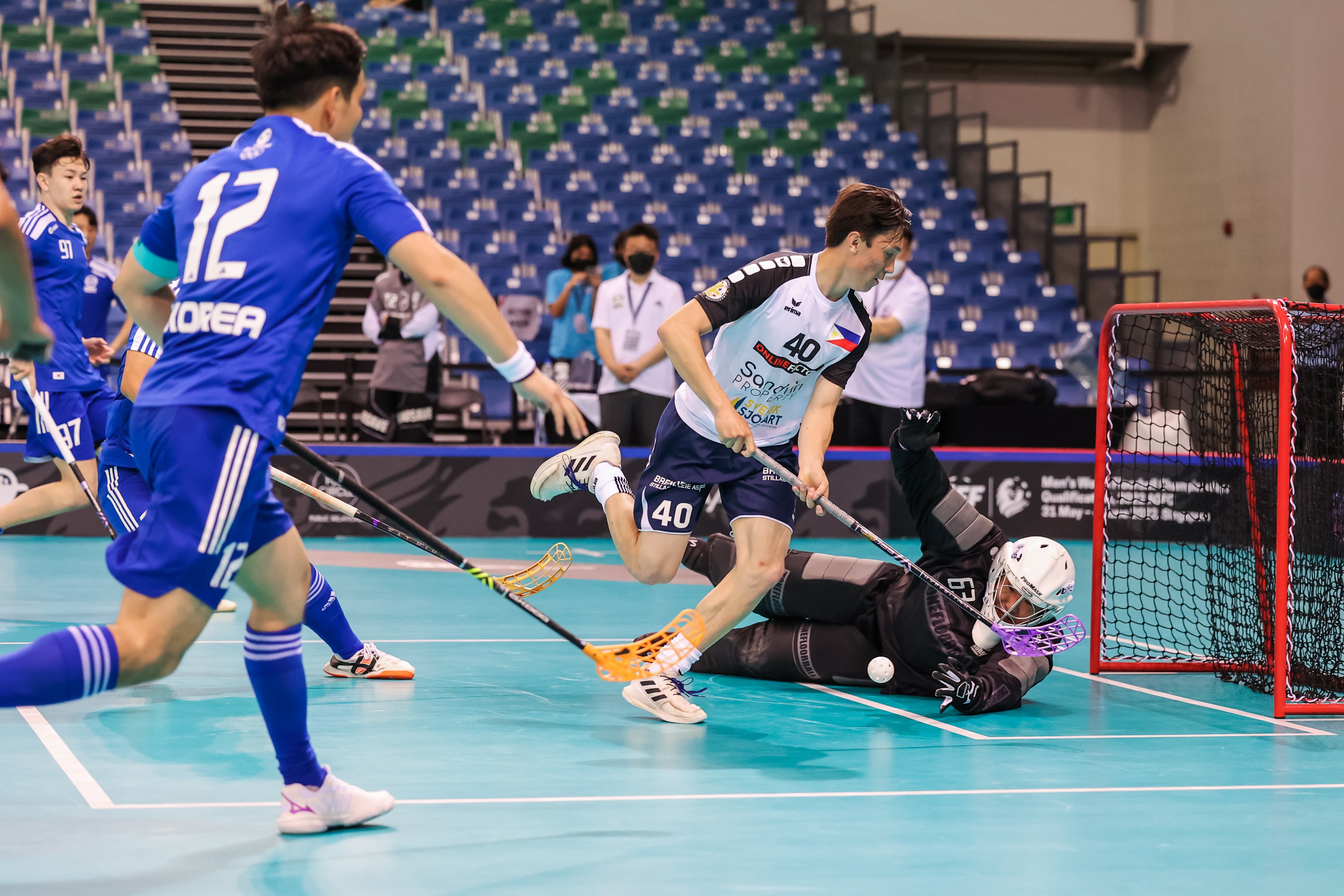 The first match of the day saw the Philippines triumph over Korea in a 3-2 victory. The Koreans took a 1-0 lead early in the first period, but the Philippines scored two goals in quick succession to take the lead in the second period. They then scored another in the third period to put the game beyond doubt. 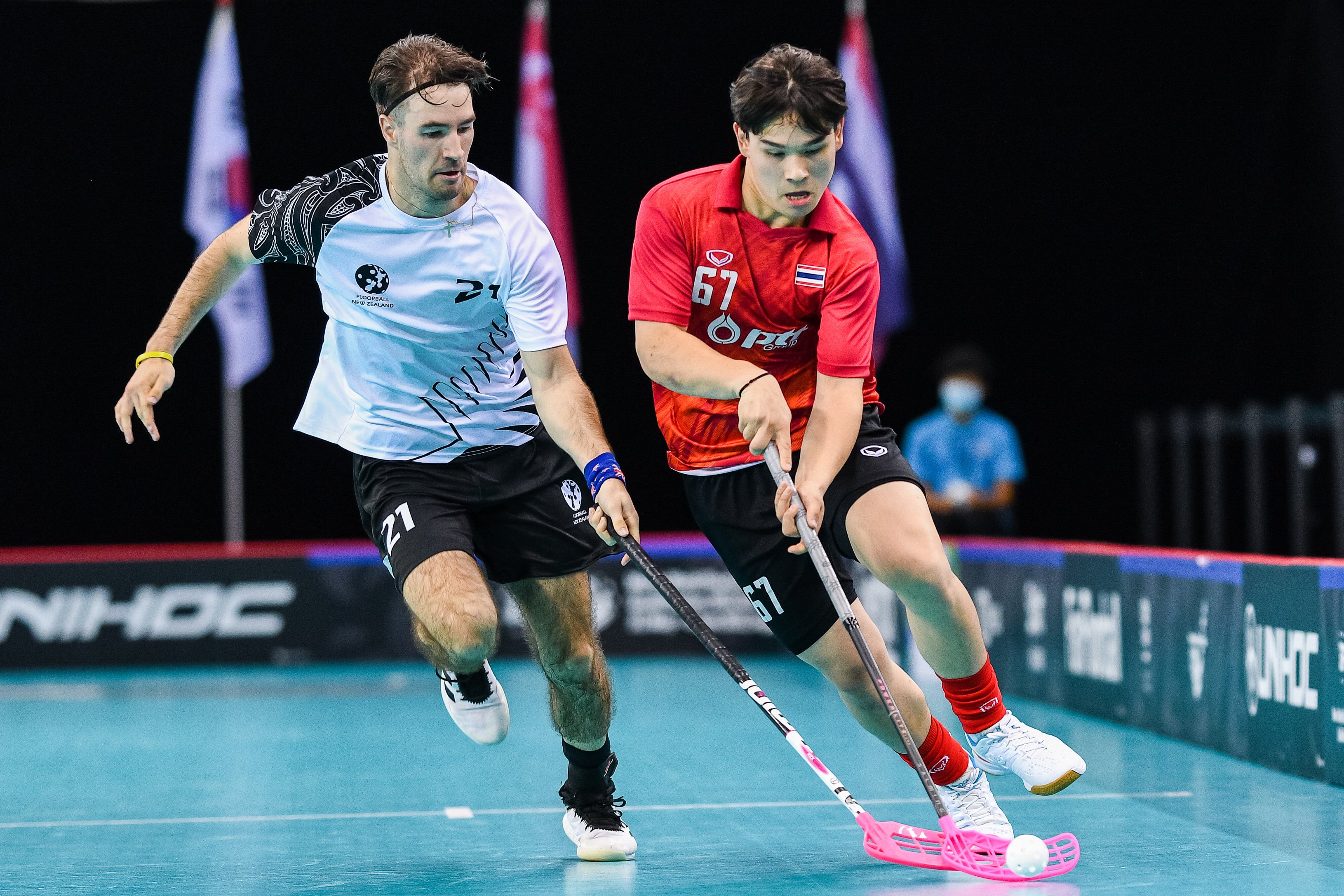 (The Thais in an attacking move down the flank. Photo Credit :  Eng Chin An, Singapore Floorball Series)

Thailand opened their campaign with a resounding 10-1 win over New Zealand, and captain Pawat Thaidit said: “The first game in the World Cup Qualification is always hard and we don't know what will happen because we haven't played against New Zealand for five years, and we don't know anything about their game. But it was a good outing for the whole team, I think we played smart, and it was a good first match in Singapore.”

The Men’s WFCQ-AOFC is part of the inaugural Singapore Floorball Series, which was launched as a platform that aims to regularly bring top floorball action to the community. In this year’s Series, the Men’s WFCQ-AOFC takes place following the Women’s AOFC Cup, which was held from 23 to 28 May.

The match schedule for 1st June is as follows:

ALL Matches will be Live streamed as well on ActiveSG Circle : go.gov.sg/mwfcqaofc2022