Thailand & Philippines are through to Men's World Floorball Championships!

2 June 2022 - The Philippines and Thailand have secured the first 2 of 4 World Floorball Championship (WFC) spots, after an exciting day of exhilarating floorball action at the Men's World Floorball Championship Qualification-AOFC (Men's WFCQ-AOFC). On day 3, the Philippines beat Australia 4-2 to top their group and clinch their place in the Men’s WFC in November, while Thailand overpowered hosts Singapore 9-1 at the OCBC Arena. The other matches of the day saw New Zealand pip Malaysia 7-5 to finish third in Group H, while Korea finished third in Group G due to superior goal difference after a 4-4 draw with Japan.

New Zealand and Korea will face Australia and Singapore respectively on Friday (3 June) with the winners securing the remaining 2 Men’s WFC places. 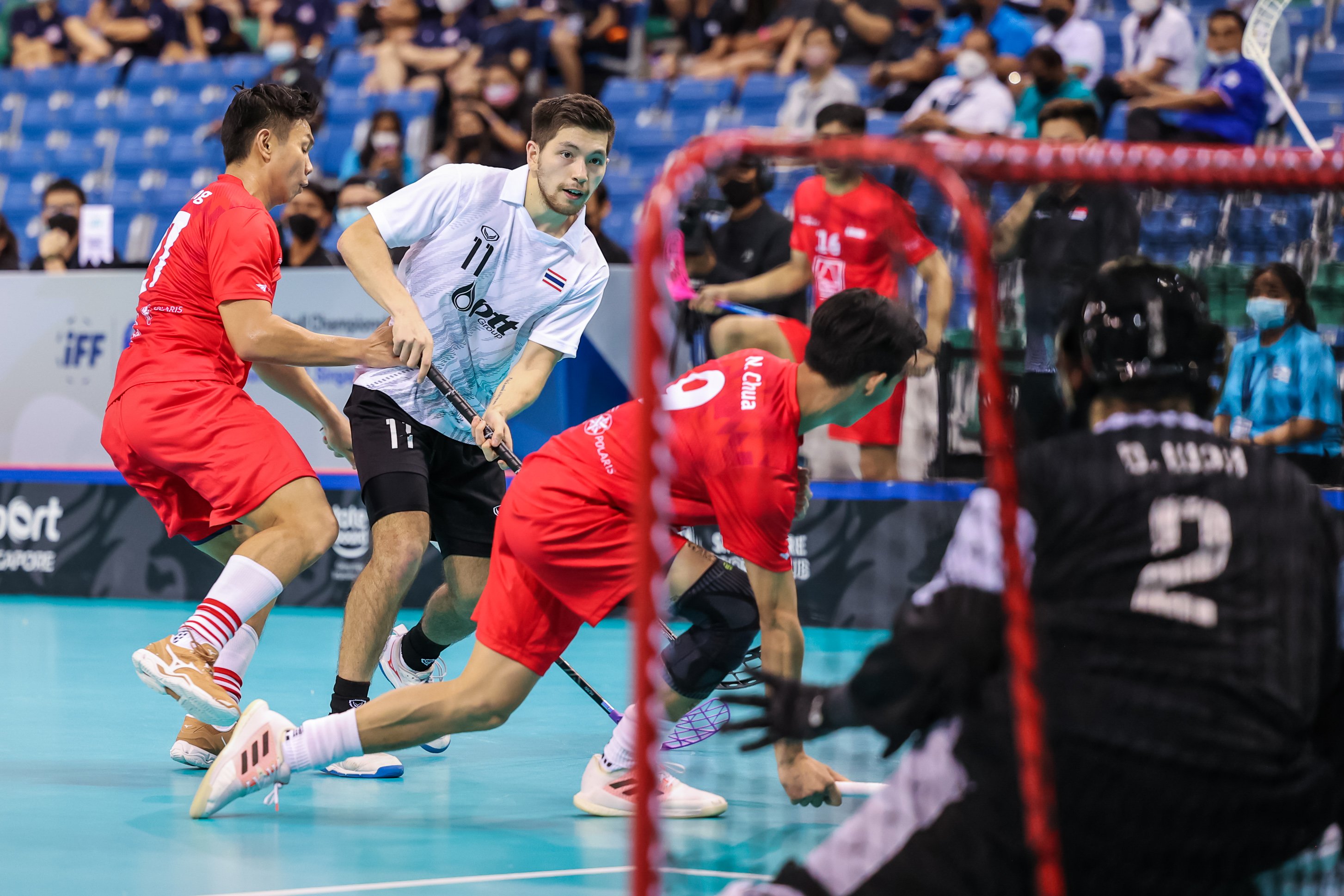 The battle for the top position in Group H started like a dream for Thailand, who plundered 3 goals in three minutes in the first period through Jeerayut Yaemyim and captain Pawat Thaidit. The goals kept coming for Thailand, as they continued attacking to extend their lead to 6-0 by the end of the second period. There was no stopping the Thais as they kept Singapore at bay with three more goals in the third period. A consolation goal for Singapore came with less than four minutes to go, sending the crowd at the OCBC Arena into frenzied cheers as Cheang Jia Qing’s shot found the net. 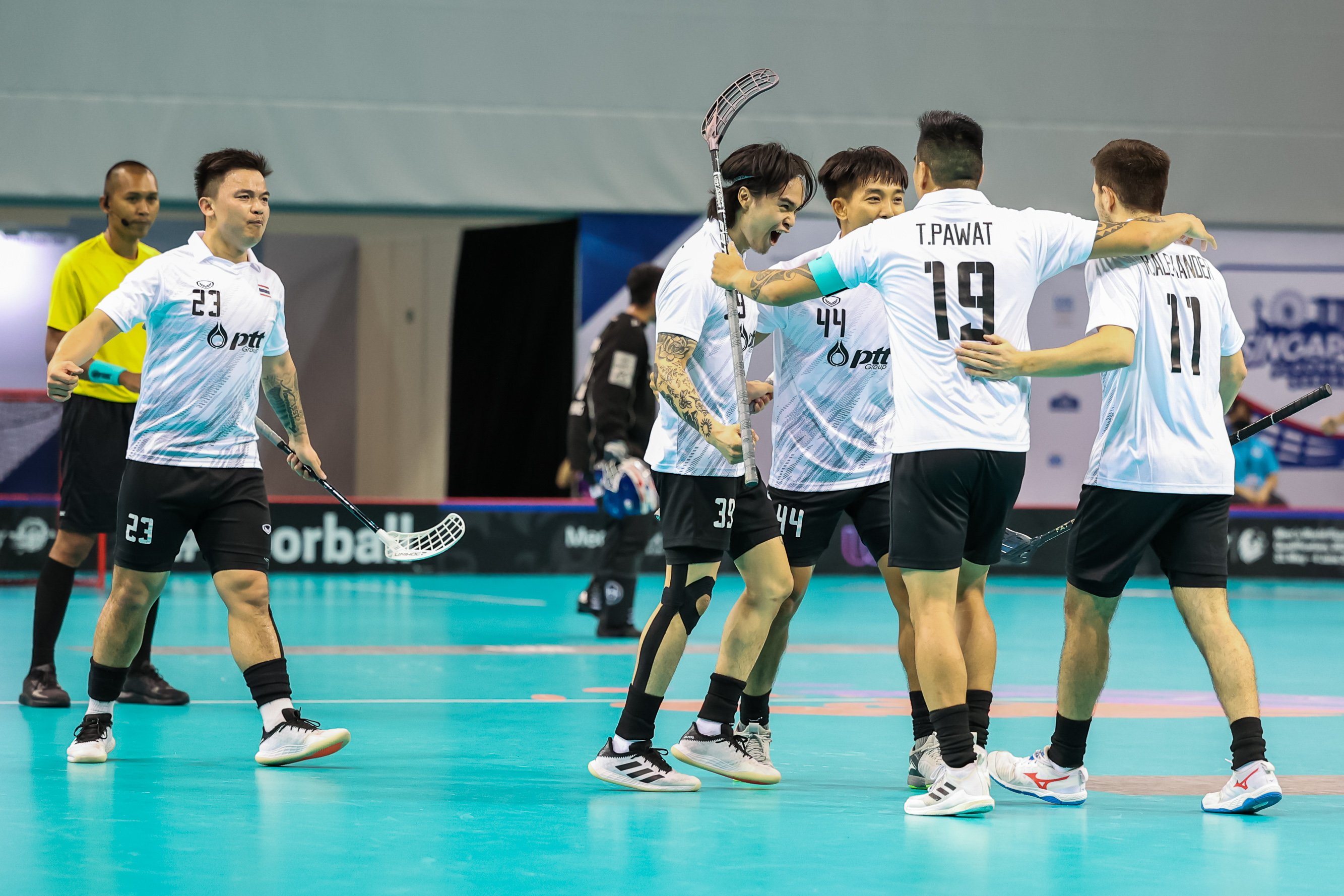 The Thais celebrated as the final whistle blew, and Player of the Match and goalkeeper Yotsaphong Chaiphring said: “It's a lot of emotion. The team and I have worked a lot for this. We knew that coming to Singapore it will be a hard game against them in the group and the atmosphere in the arena was amazing to play in today. But I'm just glad and happy for the team. We are going to Switzerland and I could not be more proud of the guys. It was easy in the goal because they helped me a lot today.”

The Thais will return to the OCBC Arena on Saturday (4 June) to face the Philippines in the Men’s WFCQ-AOFC Final and though they have a day off on Friday (3 June), they will not be celebrating just yet. Yotsaphong added: “We are going to be up early for breakfast, then recover and maybe get a little rest, but we have not finished the tournament yet. We're going to show all, who is the best team in Asia-Oceania, so we're gonna fight hard.”

Singapore’s Player of the Match Yeung Chun Yin congratulated Thailand for their successful qualification to the Men’s WFC, as he noted that the opponents took their chances well in the game. He added: “I believe that most mistakes were made by us and they actually capitalised on it. They are really good at what they do best – in blindside shots, and more often than not, we got punished by our mistakes.” 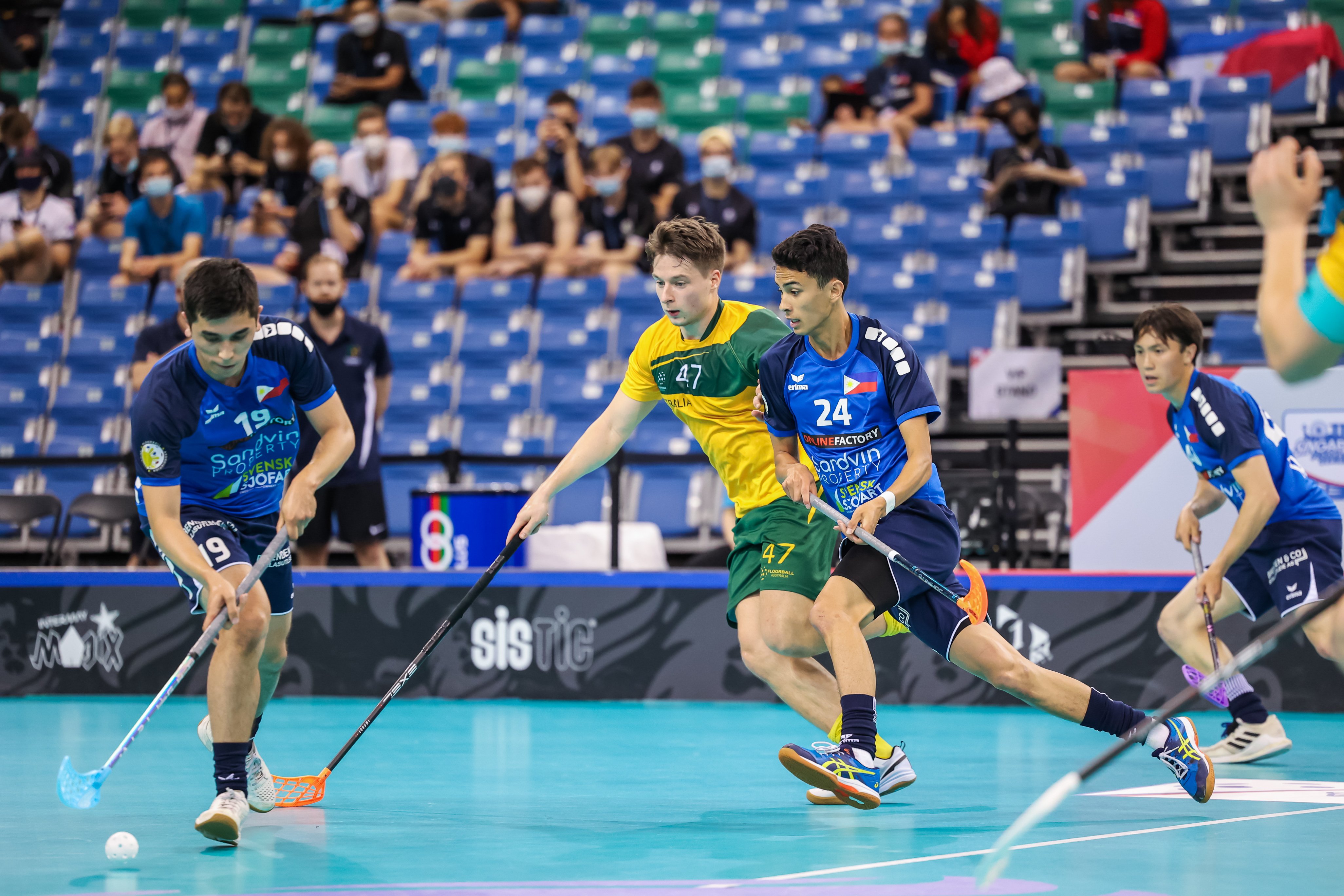 In the earlier game to determine the top finisher of Group G, Australia had taken an early lead through Daniel Gartner with a low driven shot into the corner of the net. The Philippines equalised late in the first period despite being a man down due to a timeout, and the first period ended with the scores level at 1-1. The Philippines piled on the pressure in the second half, which paid off as they scored two goals to pull away from Australia. Kim Franz Varga scored another goal for the Philippines in the final period to wrap up their 4-2 win.

The Philippines had replaced Australia at the previous edition of the WFC in Helsinki in December 2021, as the latter could not participate due to Covid-19 travel restrictions. Philippines captain and Player of the Match Lucas Perez said: “It’s so cool, it’s like a dream.  We played in the World Championship last year in Helsinki, but that was like a free ticket. This time we earned it, so I'm very proud of all our players and our country as well.

“For now, we’ve earned ourselves a free day for tomorrow, so we will try to enjoy Singapore on Friday. But our next goal is our next game here, so we'll stay focused here for a while and then we’ll switch our minds to the Men’s WFC 2022 in Switzerland.” 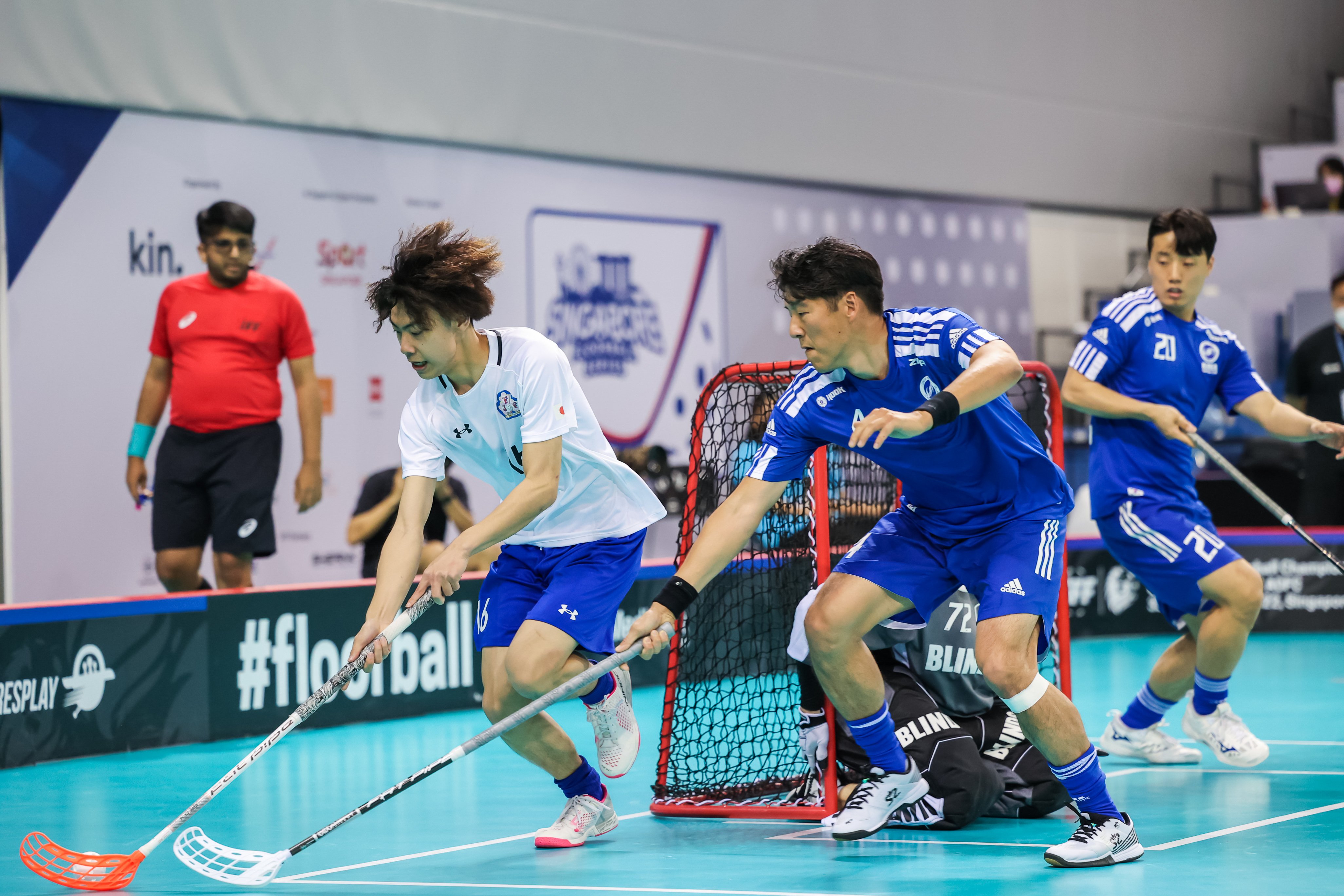 In the first Group G match of the day, Korea took a promising 3-1 lead in the first period through goals from Kim Seong Min and Max Parbrand, before Japan caught up to bring the score to 3-4. Hiromasa Saegusa scored to level the game for Japan as the match ended in a draw, with Korea finishing ahead in the group standings due to superior goal difference.

Japan’s Player of the Match Eiji Takizawa said: “Today’s match was one we had to win at all costs, but it was a tough match, and unfortunately the results were not what we had hoped for. We probably won’t be playing tomorrow, so we plan to reset and give it our all the day after tomorrow, and win while being thankful for the opportunity to play.” 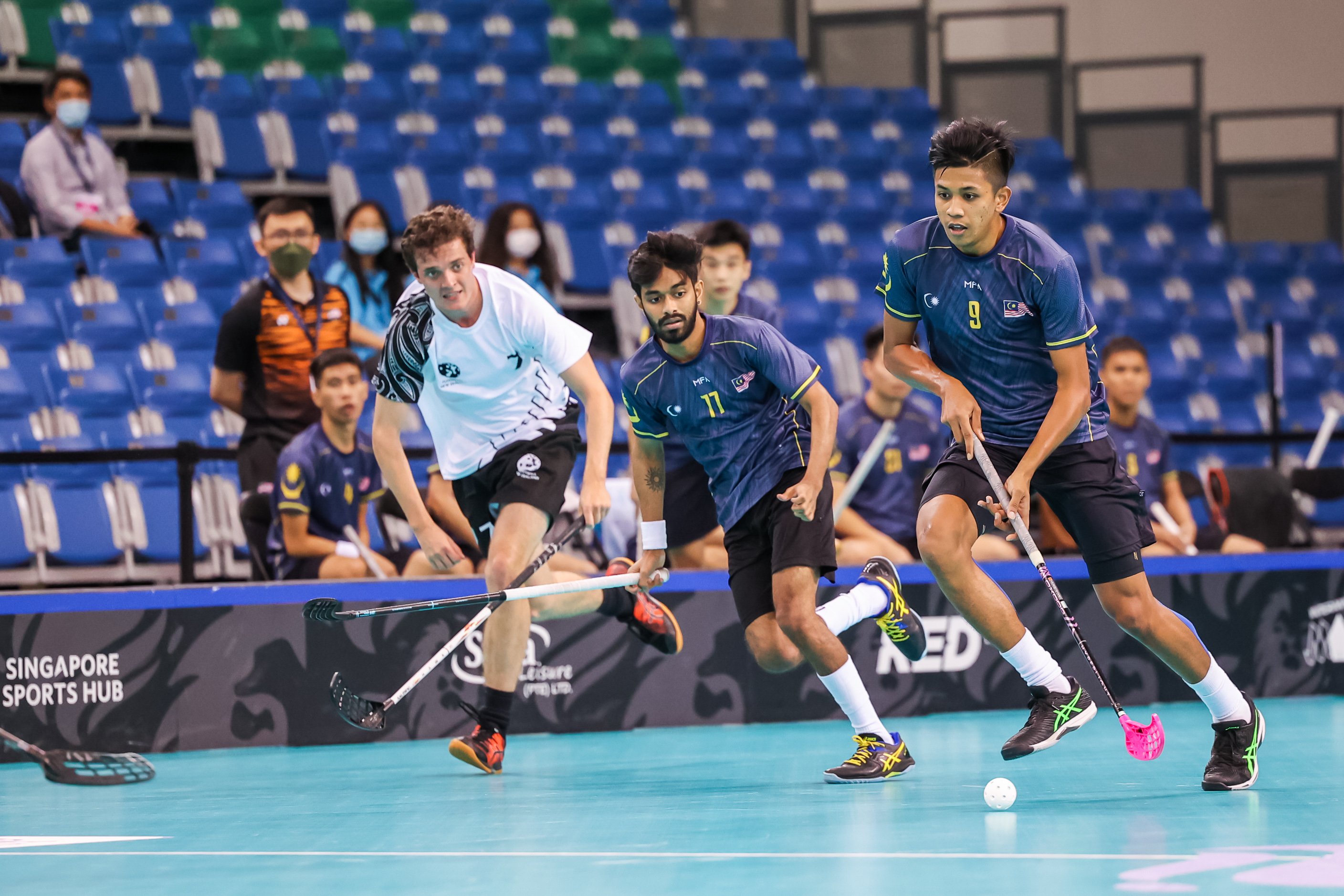 (Malaysia were pipped 7-5 to the win by the Kiwis. Photo Credit : Dennis Lim/Singapore Floorball Series)

New Zealand started their final Group G game by cruising to a 4-1 lead against Malaysia. A slight dip in tempo allowed Malaysia to score twice in two minutes in the second period, but New Zealand held strong to score another three and cement the 7-5 win.

The Kiwis' Player of the Match Alec Stewart was elated with his side's victory, saying: “This one means a lot to us. We really needed to win it to get a chance to qualify (for the WFC), and that's what I've always wanted from the beginning. We trained really hard, so a win is really good for us.”

On the coming game against the Aussies, he added: “We're going to do some video work to figure out what their weaknesses are, and what we're going to compose against that, and hopefully it will work well. We're pretty confident, but there's always pressure on us, we never know what's coming. It's our closest chance to qualify, so we really wish we could play well, play composed and work really hard.” 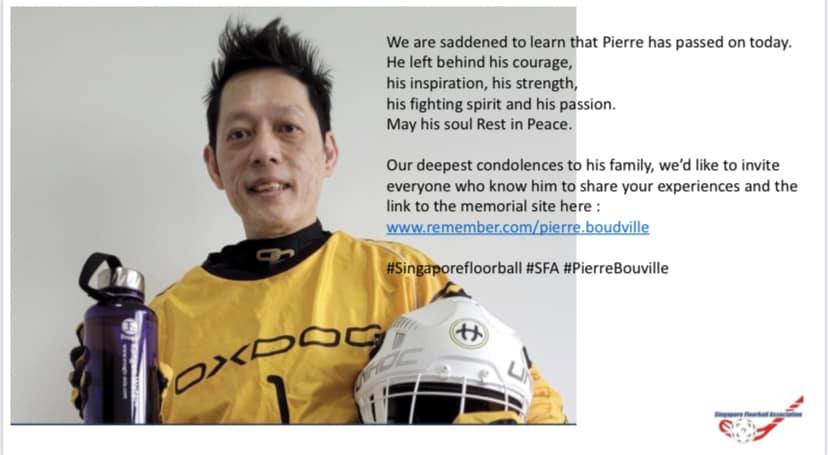 On Thursday, the local floorball community also honoured the late Pierre Michel Boudville, a former national player and floorball administrator, by naming him the first inductee into the Singapore Floorball Hall of Fame. The Singapore Floorball Hall of Fame was established this year to recognise and honour athletes and officials who have shown significant contributions to the sport since its inception, and Singapore Floorball Association president Kenneth Ho said: “Pierre is well known among many in the floorball community and has represented Singapore in many world championships. Even after retiring from the national team, he has made significant contributions to the community as an administrator. He has left an indelible mark on our sports scene and will be always be greatly missed and always remembered by the local and regional community.” 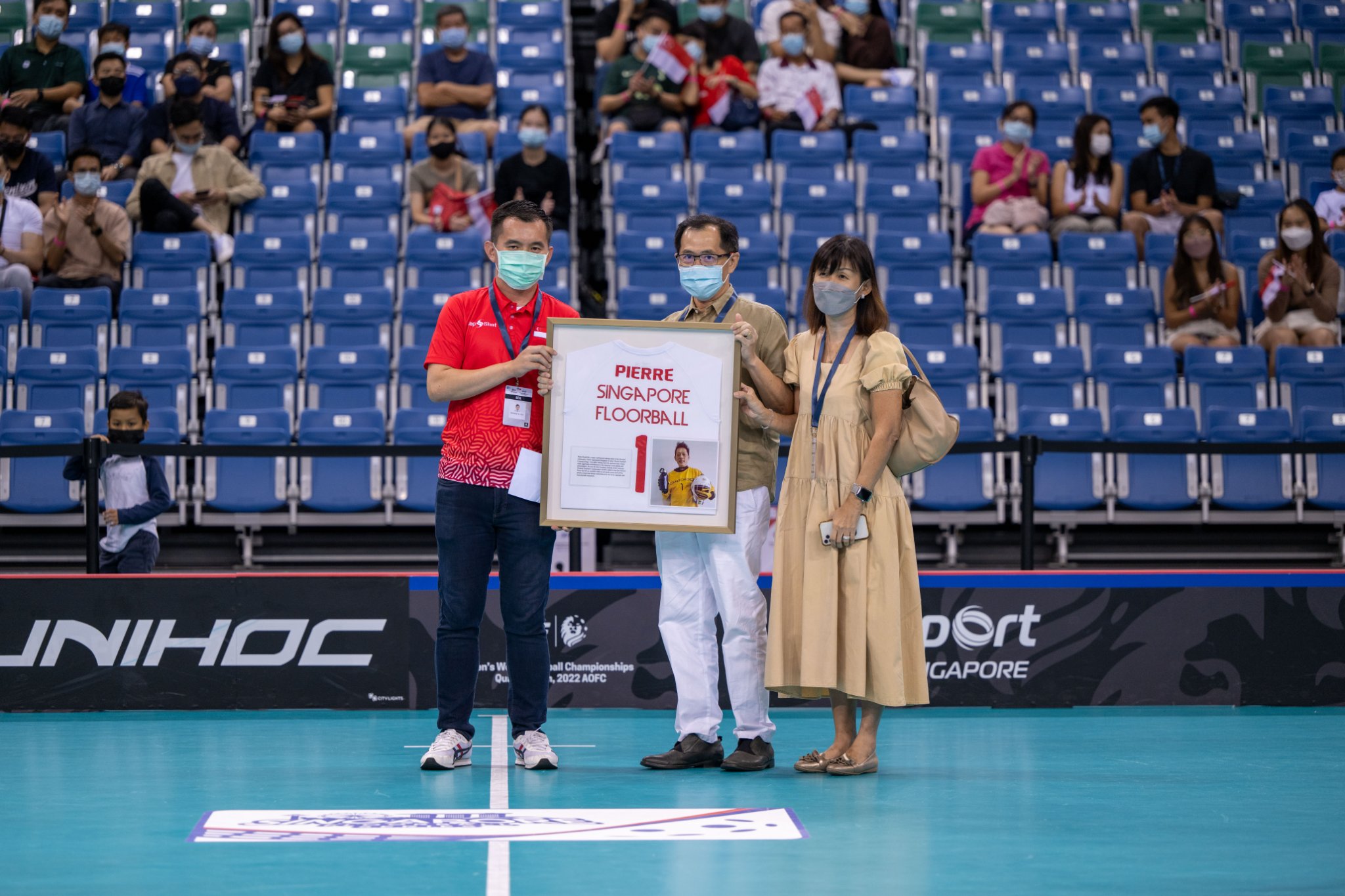 The match schedule for 3 June is as follows:

ALL Matches will be Live streamed as well on ActiveSG Circle :  go.gov.sg/mwfcqaofc2022