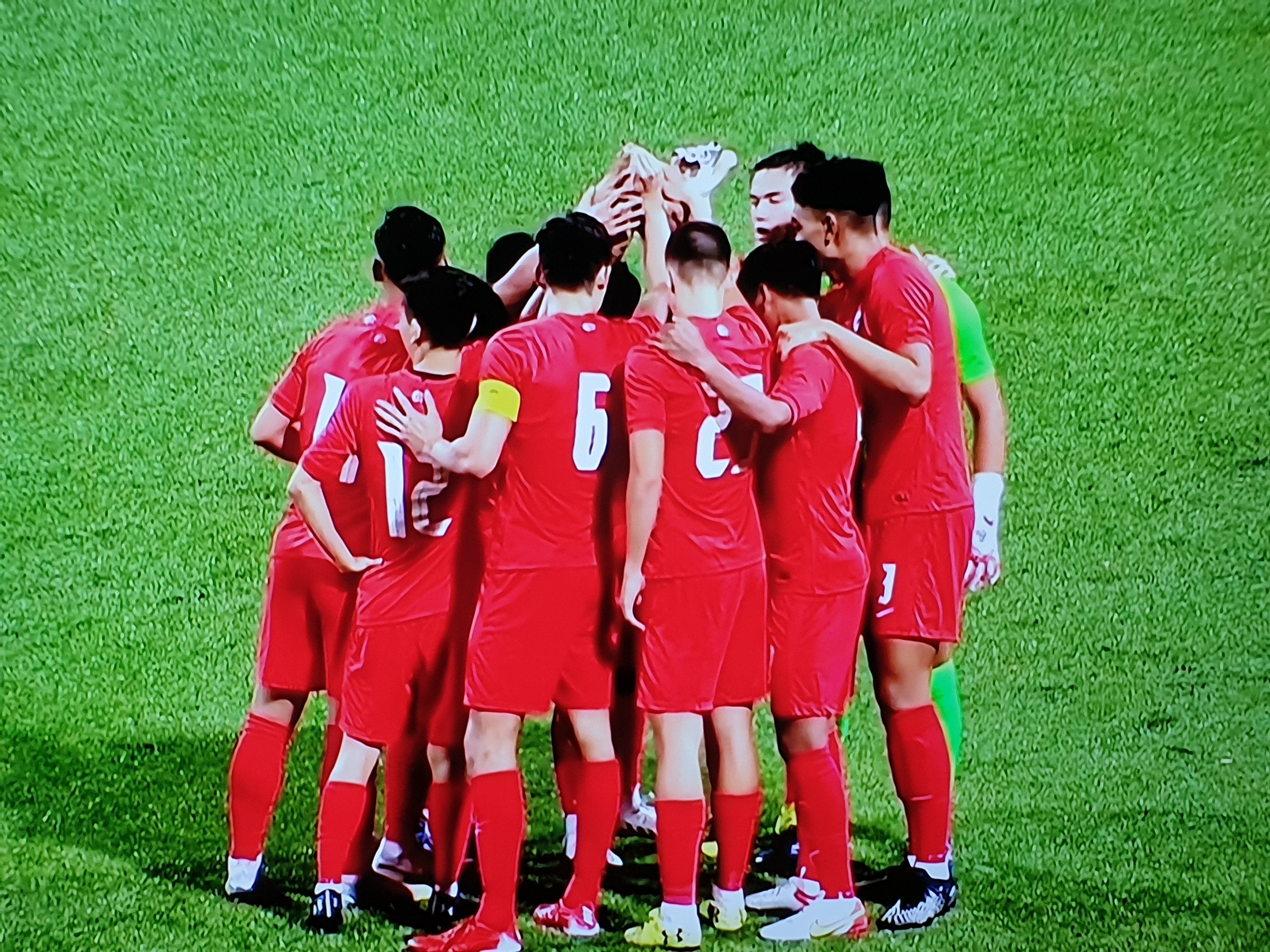 2 days ago at the Jalan Besar Stadium, the AFC Under-23 Asian Cup 2022 Group H qualifiers opened with South Korea hammering the Philippines 3-0, while host nation Singapore were held 2-2 by Timor Leste. 2 days later (28 Oct), Singapore's Young Lions squared off against their Filipino counterparts, with both teams making 3 changes to their respective starting lineups. 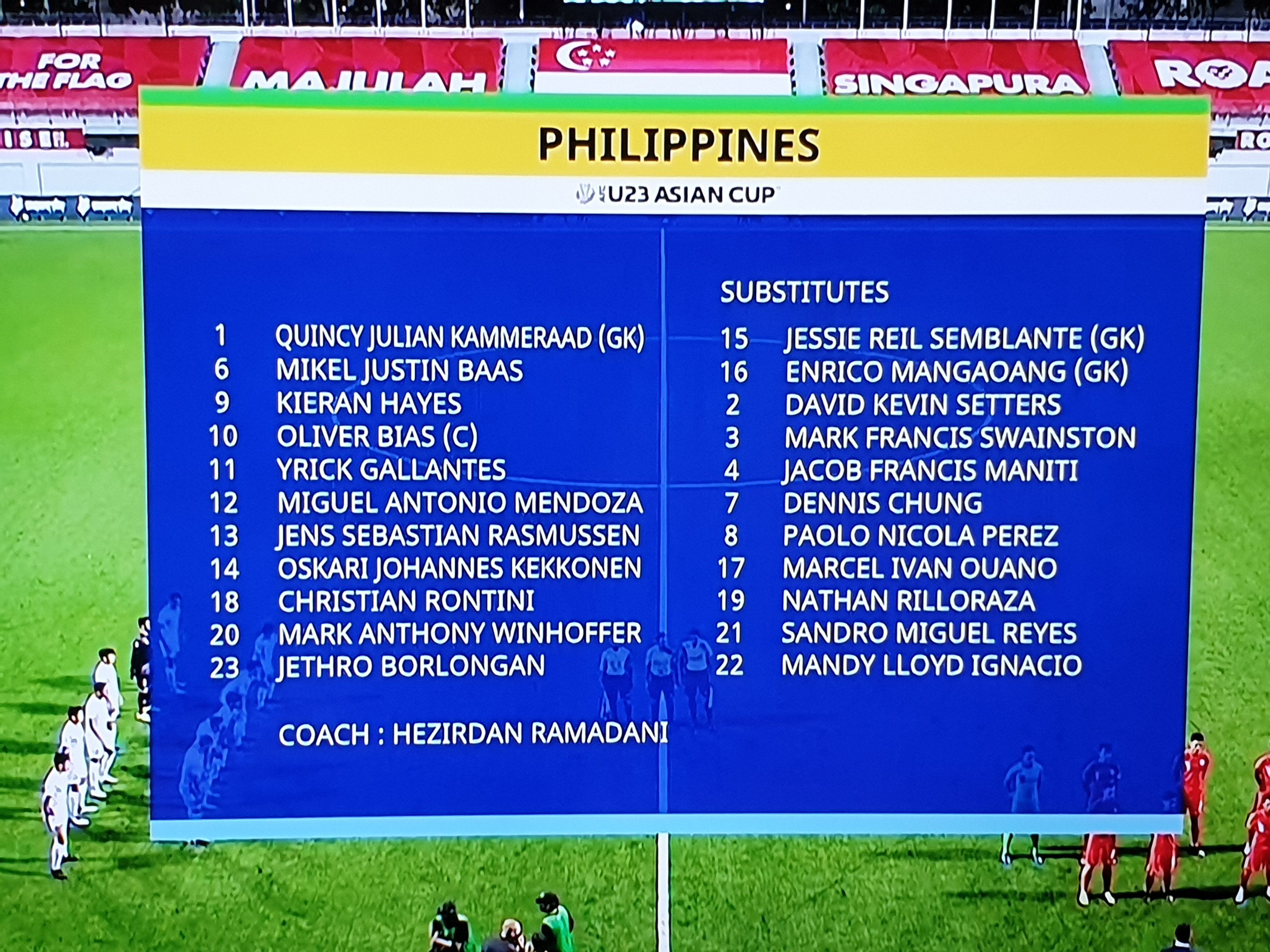 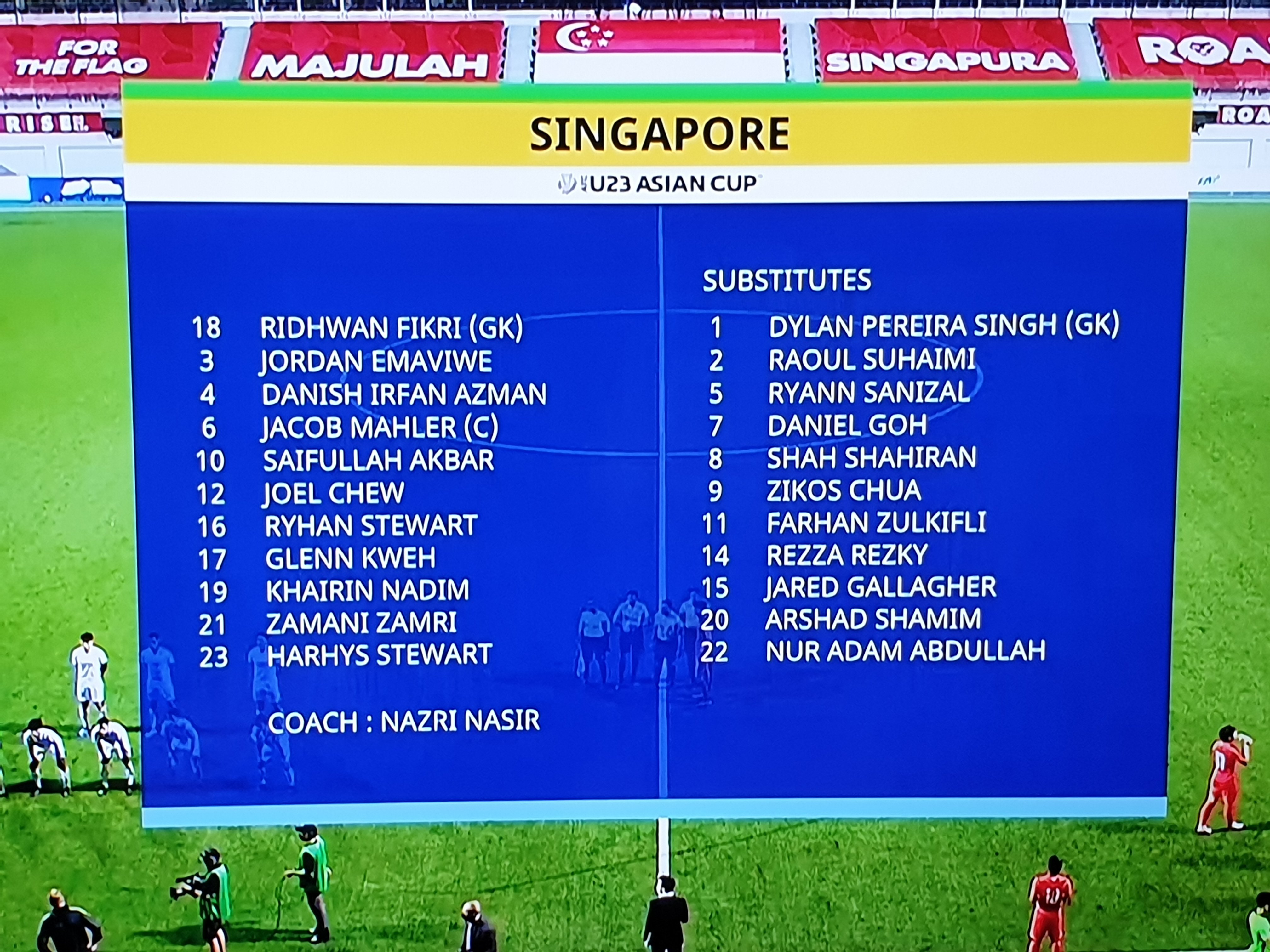 In Singapore's U22 side, coach Nazri Nasir brought in Danish Irfan as leftback, Khairin Nadim took on the role of left winger while Zamani Zamri was on the right flank. And it was Singapore which had the opening chance to score, with Glenn Kweh almost finding the net in 2 consecutive matches. In the 4th minute of play, Joel Chew floats the ball in from a freekick position down the right flank. With 8 Azkals defending and 6 Singaporeans in the penalty box, the cross comes in, Jacob Mahler heads the ball down towards Glenn. And the No 17 striker, without any hesitation, delivers a left-footed volley, which was tipped over the crossbar by Filipino custodian, Quincy Kammeraad. That save led to 3 corner kicks for Singapore, who came close to scoring by their skipper Mahler, but his headers were slightly off target.

6 minutes later, a great piece of teamwork saw the Young Lions taking advantage of a counterattack through Zamani down the right flank. He brought the ball from his own half and into the third before being nudged off the ball. But his team-mate Ryhan Stewart, appears on Zamani's blind side, delivers a brilliant cross to Khairin, who was left unguarded in the penalty box. Khairin takes a few steps and floats the ball back to Ryhan, who wiggles his way past the Filipino captain Oliver Bias, takes a shot! The ball hit the nearpost and came off another defender for a corner kick.

Singapore continued to pile on the pressure with Glenn almost scoring from just 2 metres away from goal in the 16th minute. But Quincy was on hand for the timely save. 3 minutes later, Saifullah Akbar shoots from the edge of the box and the Azkals keeper was forced to push the ball out for another corner.

In the 21st minute however, it was the Philippines with a golden chance to break the deadlock when they were awarded a penalty. TeamSG centreback Jordan Emaviwe was adjudged to have fouled an opposing player in the box, with his unsuccessful late ball clearance. Captain Oliver Bias stepped up and took the penalty. The ball hit the crossbar and was cleared away by the Singapore defence, much to the delight of the 1,000 fans at the stadium! Halftime score was 0-0. 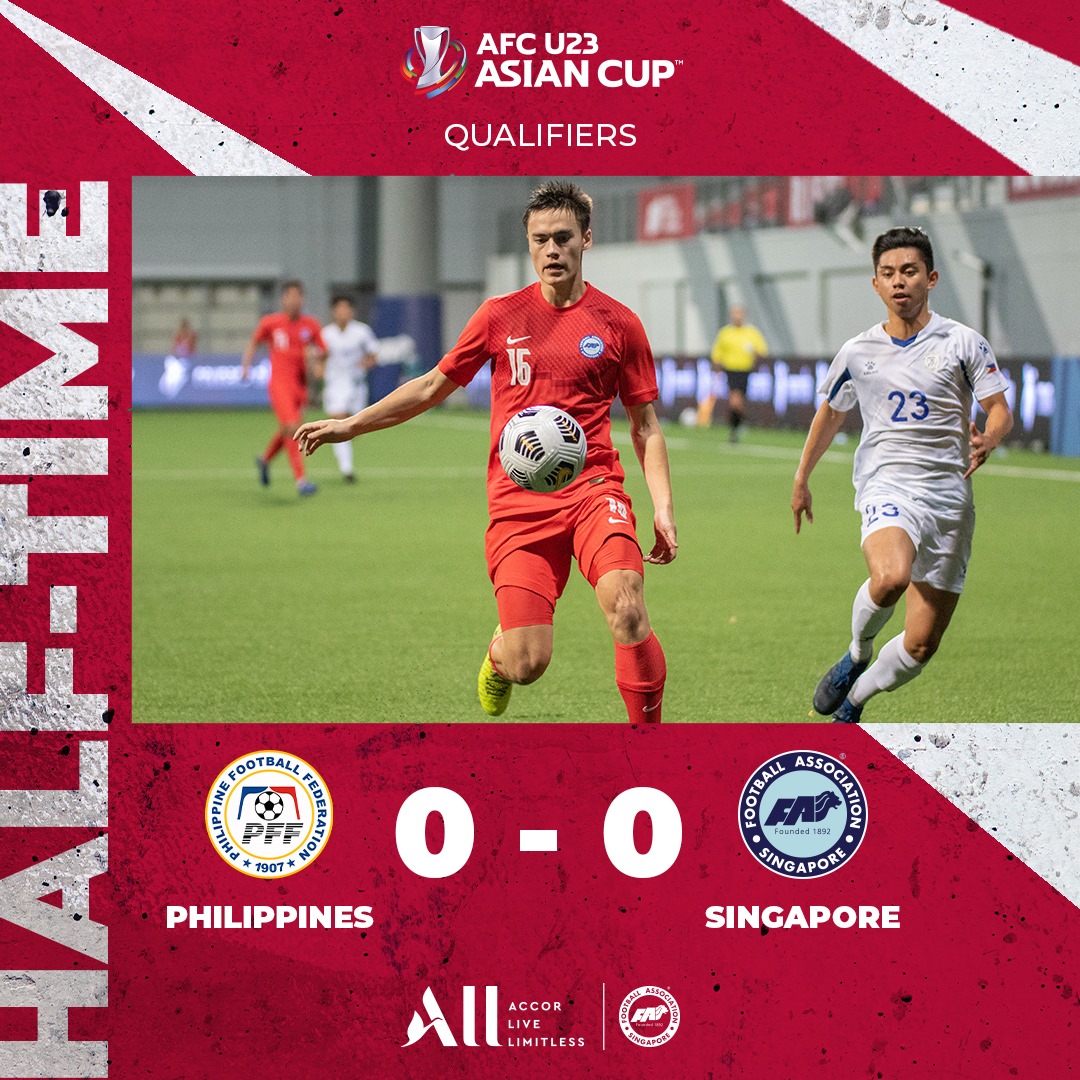 Following the halftime break, the Young Lions saw 2 changes with Saifullah being replaced by Shah Shahiran, while Farhan Zulkifli came on for Zamani. And 4 minutes after the restart, it's Singapore on the attack again with Joel Chew, seeing Ryhan Stewart sprinting down the right flank. And the No 12 delivered a sensational cross from midfield, which beats the Filipino defenders. Ryhan latches onto the ball, races into the box (on the right side) and squares it across the goalmouth, hoping for it to fall nicely for Farhan who was waiting in the middle. But at the most crucial moment, Azkals defender Christian Rontini clears the ball, much to the relief of his team-mates. 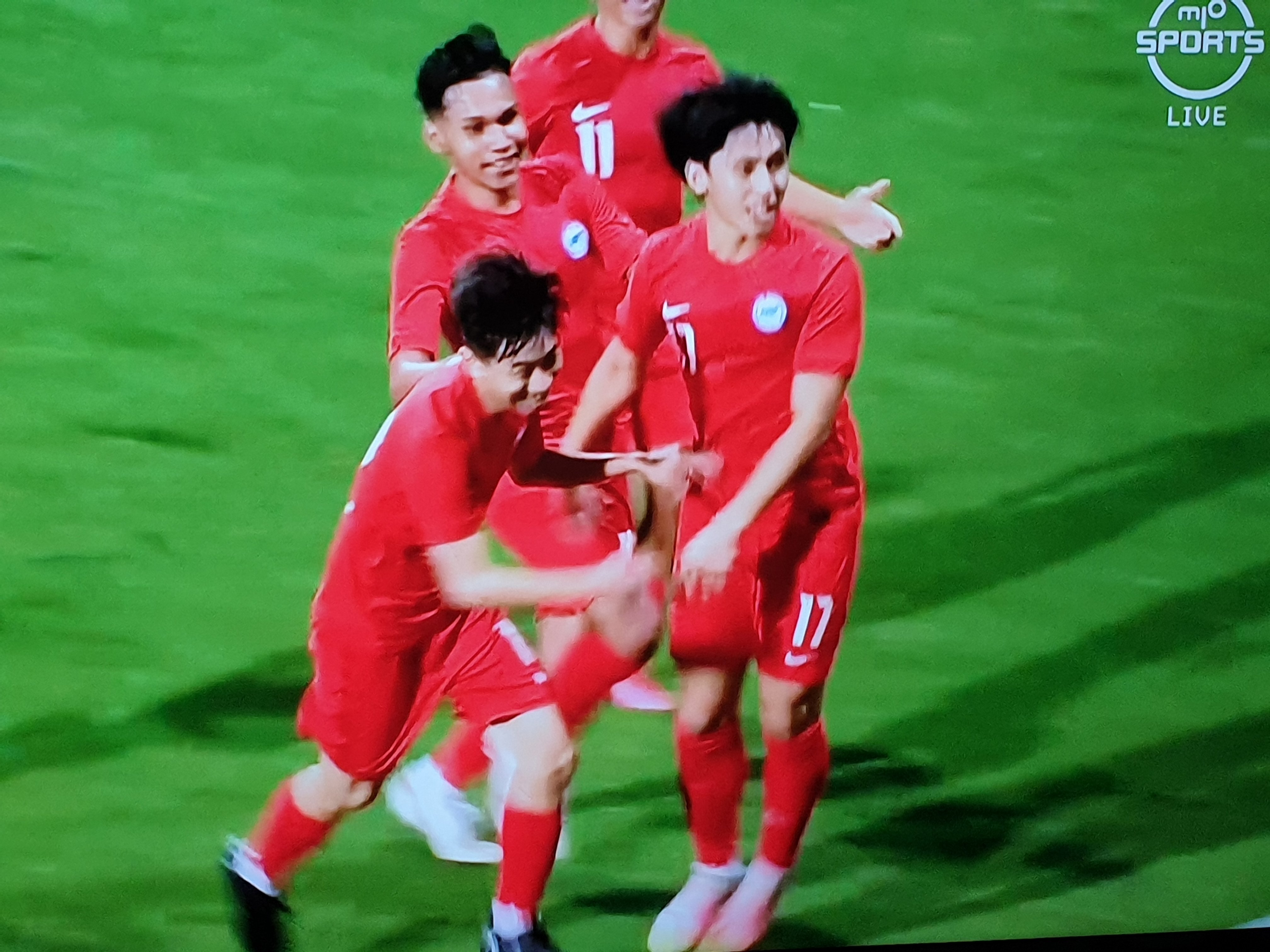 2 minutes later, Singapore were rewarded for their multiple offensive efforts. Danish Irfan delivers a long cross from midfield, aimed towards Glenn. The 21 year old traps the ball confidently, and decides to weave his way closer to the edge of the box. He dribbles past 1, past 2 and after getting by his 3rd defender, Glenn unleashes a long strike with his sweet left foot. It beats the goalkeeper who dived at full stretch, but the ball hits the post and went into goal. 1-0 to Singapore!

The Young Lions could have been 2 goals up, if a penalty was awarded in their favour in the 76th minute. Ryhan races with the ball into the penalty box. But Azkals defender Oskari Kekkonnen came in for a hard challenge, which knocked Ryhan to the ground. And despite his rather robust clash into the No 16 rightback, Kekkonnen escaped being booked by the referee. Over the final stretch of the match, Team Singapore had a few more chances to increase their lead. But the final score remained 1-0. 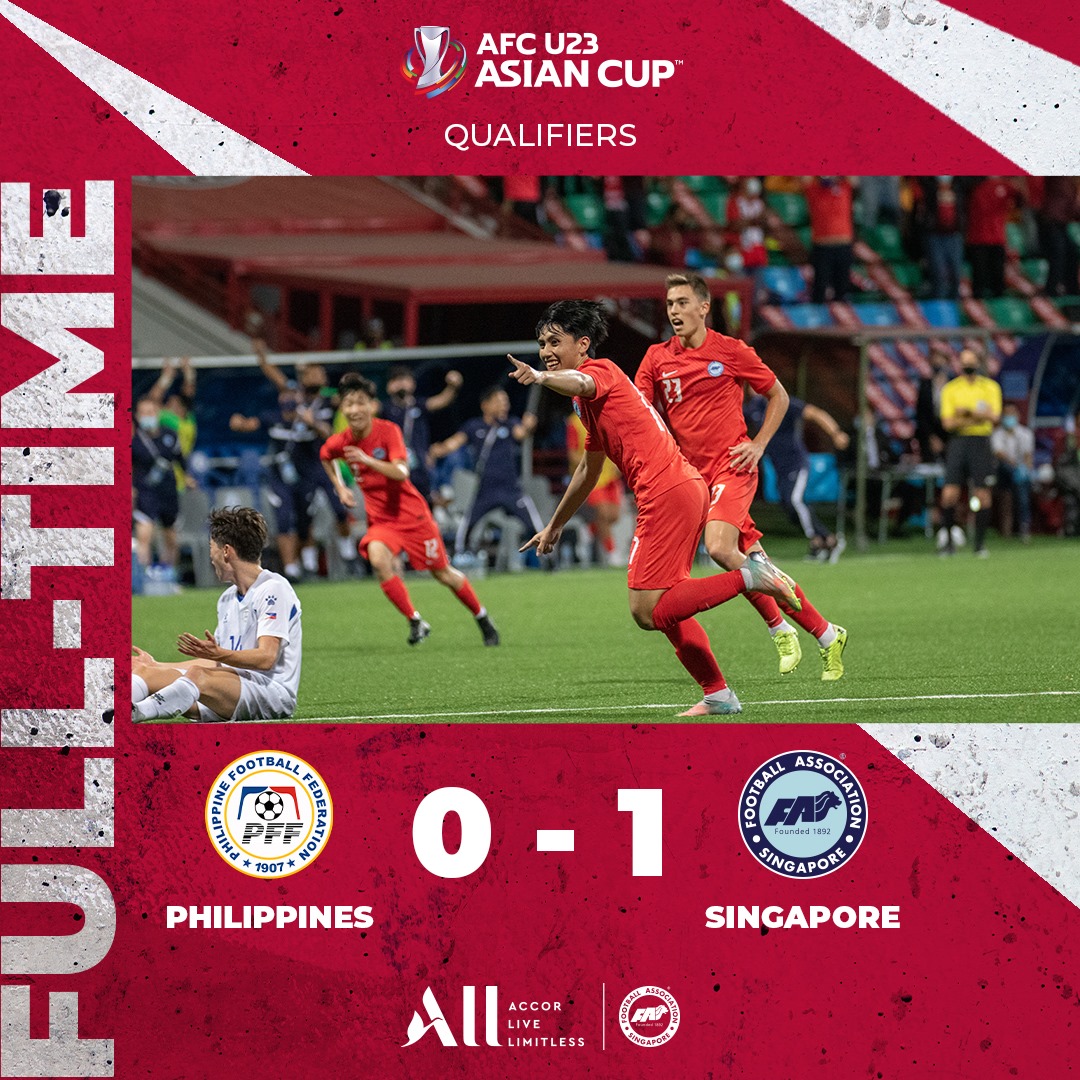 The win puts Singapore in 2nd place with 4 points. And they'll face the current champions from Korea on Sunday (31 Oct). The Koreans thrashed Timor Leste 6-0 in today's earlier match and are 2 wins for 2. Overall, it was a much better performance from Singapore as they attacked in numbers, controlled the ball extremely well, neat passes between the players, excellent handling of the deadball situations and delivering a creative style of play. Hopefully, all these elements of their teamplay will be showcased against the Koreans on Sunday.