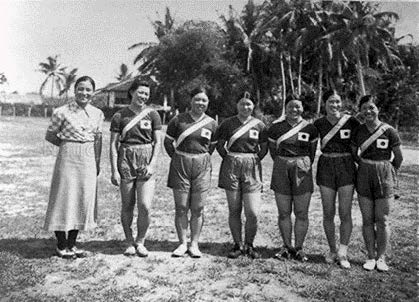 Pre-war: Japanese women athletes of the 1936 Berlin Olympics gather on the grounds of the Japanese Club in Singapore. c.1930s. Source: The Japanese Association Singapore collection, courtesy of National Archives of Singapore (Media – Image No: 19990002629 – 0076)

Cultural Tool for ‘Nipponisation’ and Harmony

Sport was perceived as a means of re-establishing social equilibrium after the invasion in February 1942. It was also a significant political tool which used any public opportunities to impose elements of Japanese culture. Coercion and indoctrination were the watchwords that touched on sport, as they did with the rest of the community.

To coincide with broader policies associated with occupation, it was necessary to form a centralised sports body. Plans were actuated by a desire to make the lives of the people of Syonan as ‘happy and bright’ as possible, once the early months of ‘Sook Ching’ (a purge of anti-Japanese elements and massacre of male civilians) that ravaged the Chinese and Eurasian communities had ended.

There was an additional agenda - to create a platform for propaganda.

The tone of official pronouncements was one of working towards harmony, peace, and eventual prosperity under the Greater Far East Asia Co-Prosperity Sphere.

Within sport itself there were distinct parallels in some of the guiding principles - fair play, perseverance and courage were shared values.

The pre-war Japanese community played games like tennis and golf, and held sports meets. Upon occupation, the Singapore Japanese Club became a member of the Syonan Sports Association (SSA), which all sporting clubs and associations had to join. 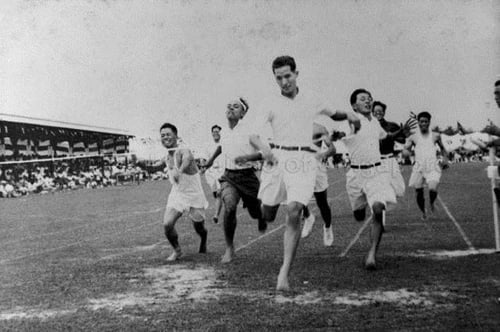 Pre-war: Reaching the finishing line at Sports Meet sponsored by the Japanese Club. 1934. The venue was likely the Jalan Besar Stadium, which later became the headquarters of the Syonan Sports Association during the Japanese Occupation. Source: The Japanese Association Singapore Collection, courtesy of National Archives of Singapore (Media – Image No: 20100000395 – 0010)

All Rights Reserved ©2022 Sport Singapore Acknowledgement:
Images courtesy of National Archives Singapore, Sport Singapore and Dr Nick Aplin. Text extracted from ‘Sport in Singapore: The Colonial Legacy’ published by Straits Times Press (2019) | Author: Dr Nick Aplin | Curator: Teresa Teo Guttensohn | The responsibility for facts and opinions rests exclusively with the author and his views and interpretations do not necessarily reflect the views or policy of the publisher.