TeamSG is off to a good start at the 8th Southeast Asian Pencak Silat Championship!

SINGAPORE, 25 February 2022 – The first day of the 8th Southeast Asia Pencak Silat Championship kicked off with the male artistic single event and male quarter and semi matches taking place at the OCBC Arena on Friday.

Singapore’s Muhammad Iqbal Bin Abdul Rahman was the first athlete of the day, scoring 9.940 in the Senior Artistic Male Single semi-final to advance to the final on Sunday. He will compete against Asep Yuldan Sani of Indonesia in the final. 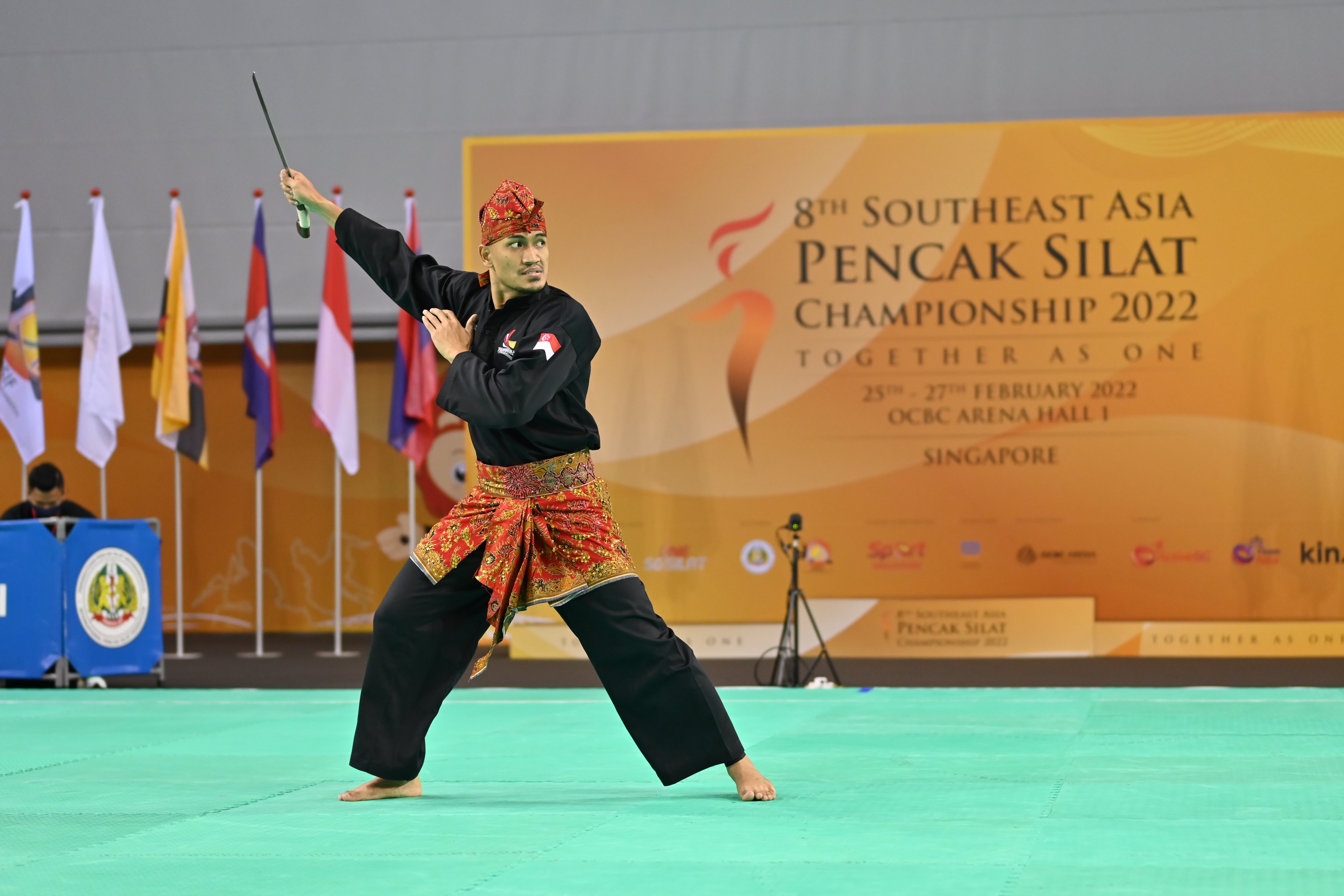 Iqbal, 28, competing in his first tournament since the pandemic started, said: “I didn’t feel very well technically at the start of the day, but I still managed to push through. I’m proud of what I did today. It wasn’t really at the standard where I can usually tell myself I did very well, but I’m quite satisfied with where I am now. Moving forward from today, I just want to keep myself fit. I’m looking forward to the next performance, which is my final on Sunday. I want to push even harder than today.” 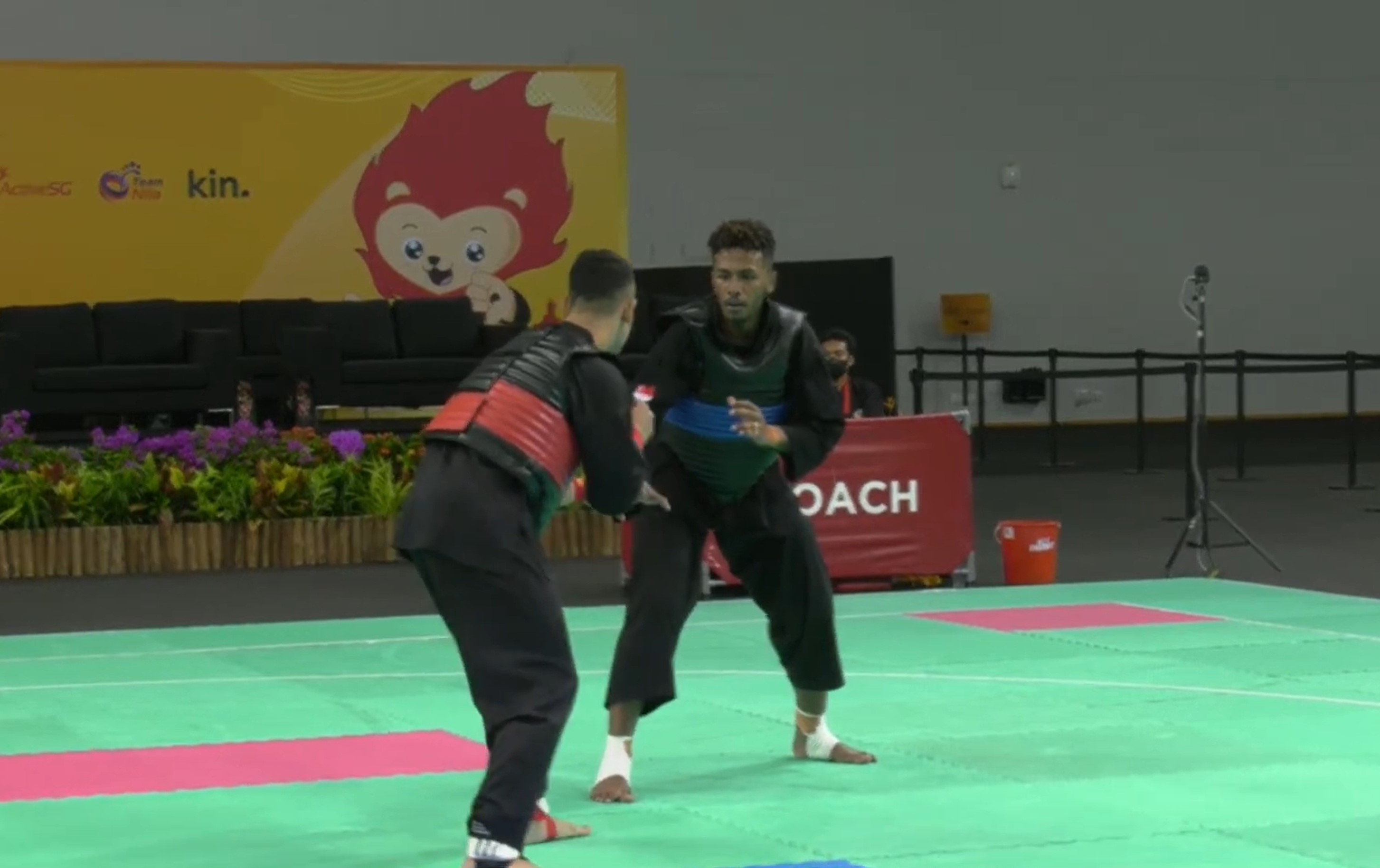 World champion Sheik Ferdous Sheik Alau’ddin was also in action, featuring in the Senior Match Male G (75-80kg) category. The 25-year-old Singaporean was made to work to secure his 17-15 win over Indonesia’s I Kadek Adi Budiasta in the quarter-final.

Ferdous, who started strong with a 7-2 lead before his opponent caught up and levelled the score in the final round, said: “I was prepared but I guess my nerves got to me a little because I was very shaky. I got a few points in the first round, lost the second round and thought to myself, ‘I can’t lose this, if not I’m going home with no medal.’ So I plucked up my courage, got that one kick in and that got me ahead of him. I’m really glad I won and I’m hoping to do better in the semi-final.”

He next faces Vietnam’s Nguyen Tan Sang, and will be taking valuable lessons from his quarter-final bout.

“There’s no room for nerves at all. I think (Nguyen) might be my strongest opponent in this class,” added Ferdous, the world champion in the Class I (85-90kg) category. “We’ve never fought each other before, so it’s a surprise for both of us. Nevertheless, I’ll be preparing myself well for this upcoming match. I hope I can perform way better than this and make it to the final.”

Silat exponents from around the region welcomed the return of competition as well. Nguyen Duy Tuyen of Vietnam, who defeated Indonesian Ronaldo Neno 32-35 in the Senior Match Male Class H (80-85kg) semi-final, said: “I'm very happy to come to Singapore and compete in the tournament. My opponent performed very well today, and I want to have a good next match too.”

Athletes from Singapore, Indonesia, Malaysia, Thailand and Vietnam are competing at the 8th Southeast Asia Pencak Silat Championship, which is ongoing from 25 to 27 February. Matches will be streamed live on the Singapore Silat Federation’s (Persisi) Youtube channel here: