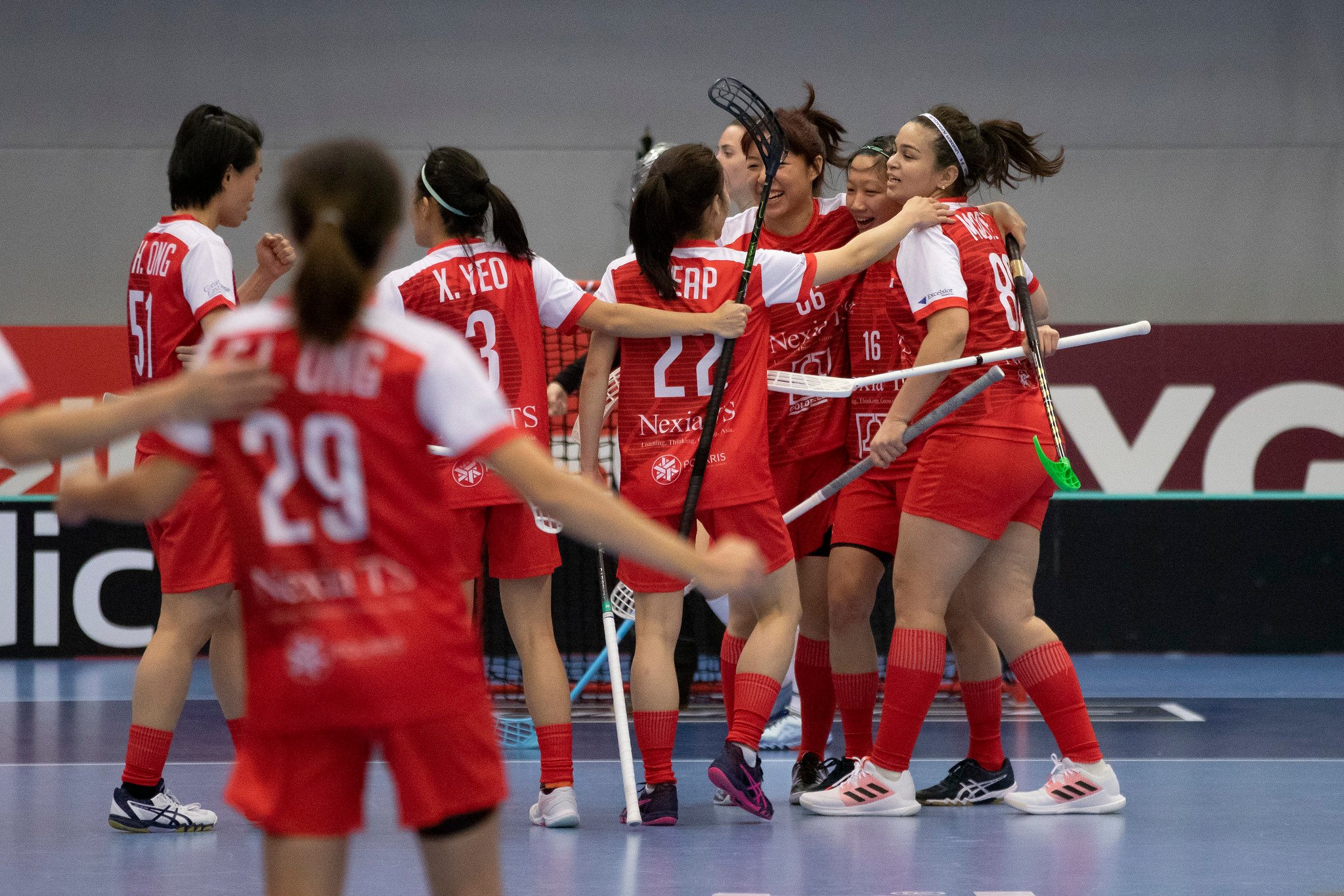 Singapore and Estonia met again for the 2nd time in their last game at the 2021 Women's World Floorball Championships in Uppsala, Sweden. Previously, in the opening game of the tournament, the Estonians triumphed with a narrow 4-3 win over the Republic. And tonight (2 Dec), both teams fought it out fiercely for the 13th position and Singapore were once again defeated with a score of 2-1. 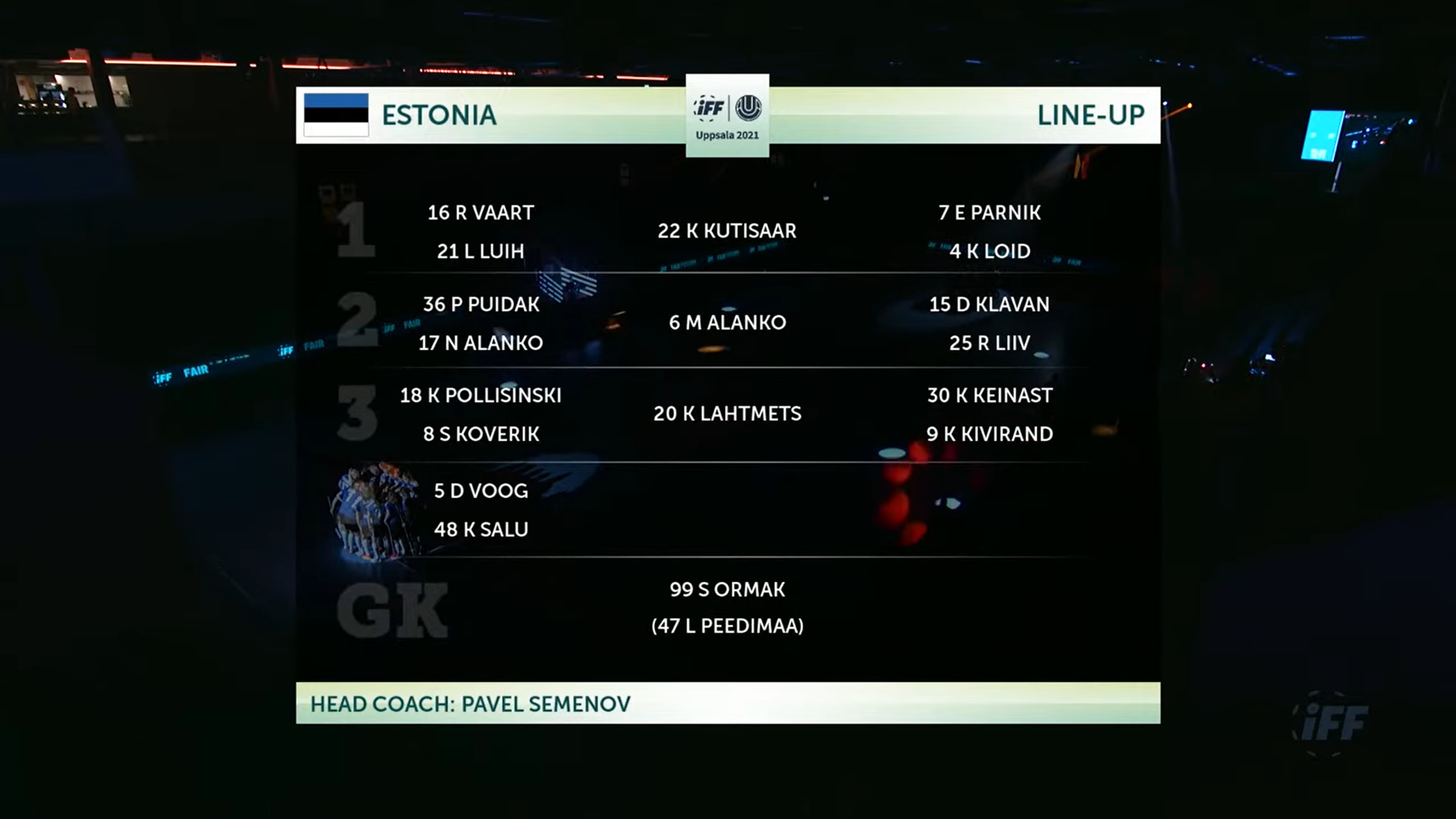 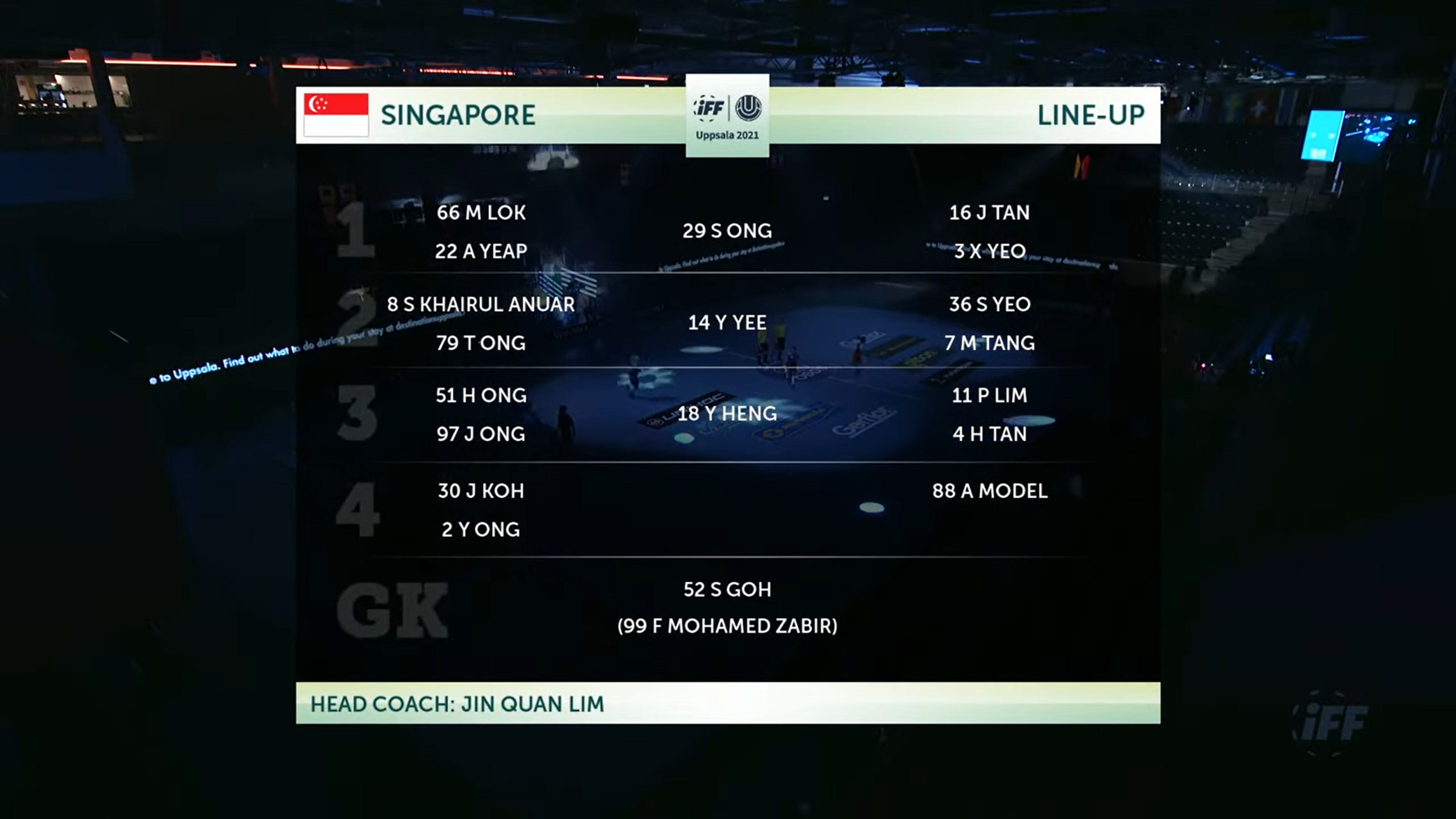 Those first 10 minutes of the game showcased the excellent defensive maneuvers that both teams had perfected by the end of the tournament. The game was at a deadlock with no mistakes made till the 11th minute. Estonia’s Diana Klavan was awarded a 2-minute penalty for slashing against Singapore and was sent to serve her time in the sin bin. 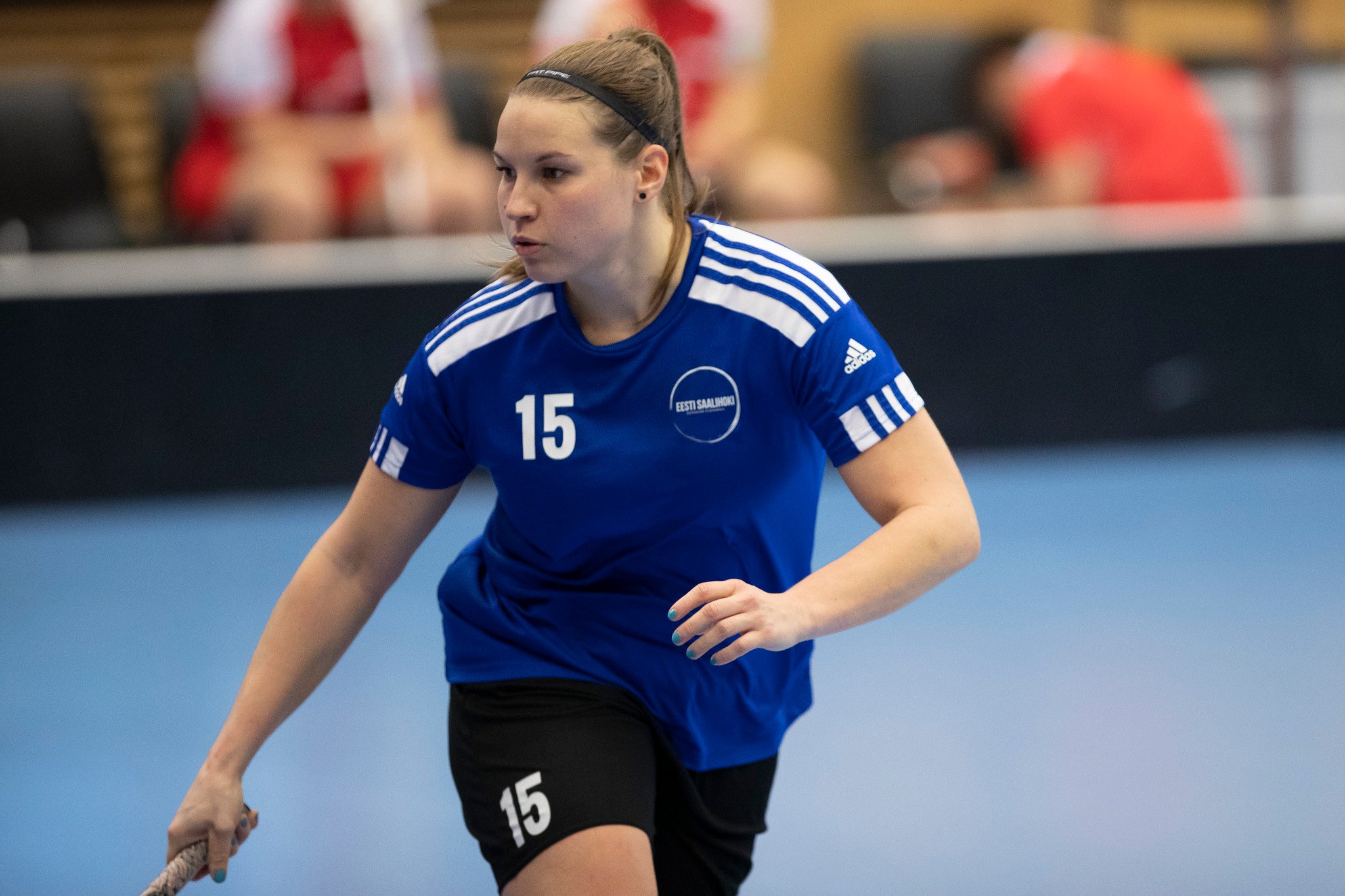 (Estonia’s Diana Klavan is the 1st place to be sent to the sin bin. Photo Credit : IFF)

Singapore had the one-man advantage, which they fully intended to utilize. Several passes were made around the Estonian goal with hopes to get it past the goalkeeper, Saskia Ormak. Finally, Amanda Yeap, passed the ball down the boards from Estonia’s corner to Angela Model to put it in for Singapore. And the 33 year old tournament debutant scored her 3rd goal of this campaign - it was strangely reminiscent of the assist and goal against NFFR (Russia) earlier in the tournament. Meanwhile, it was 1-0 to Singapore after 12.5 minutes. 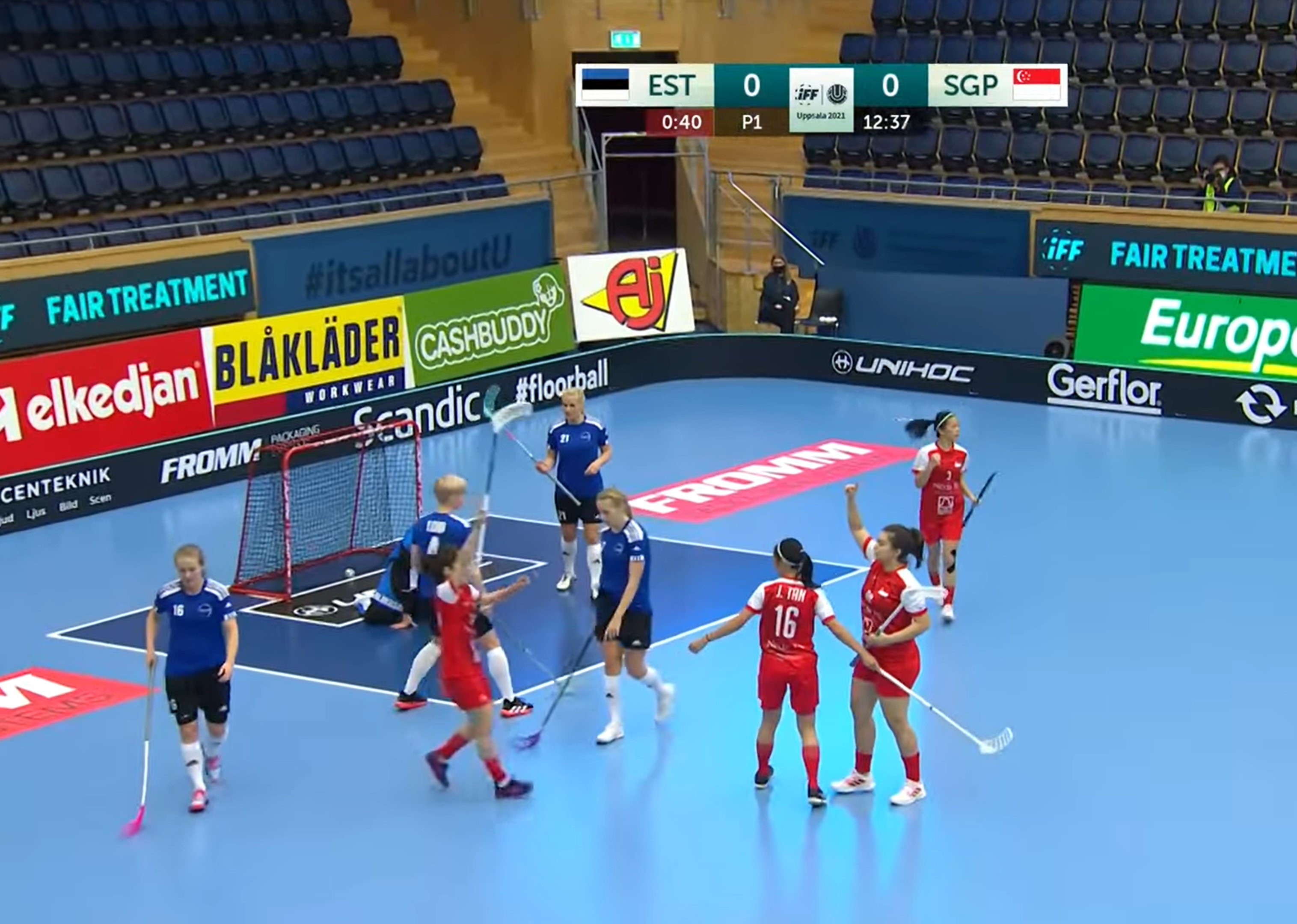 Estonia were all riled up to equalize and waited patiently for Singapore to make a mis-step. And that came in the 15th minute, when Edith Pärnik brought the ball behind Singapore’s goal. Estonia's captain Kati Kütisaar, rocketed forward to receive the pass and scored without a break in her step. The game once again entered a deadlock, at 1-1, and would continue as such till the period ends.

The Estonians won possession right from the get-go, in the 2nd period. Kütisaar used the momentum to take a close range at the Singaporean goalkeeper Shermaine Goh - an absolute solid rock for the team - managed to get it out of the way. Singapore forced Estonia to relinquish control and the game proceeded with back-and-forth attempts at domination. 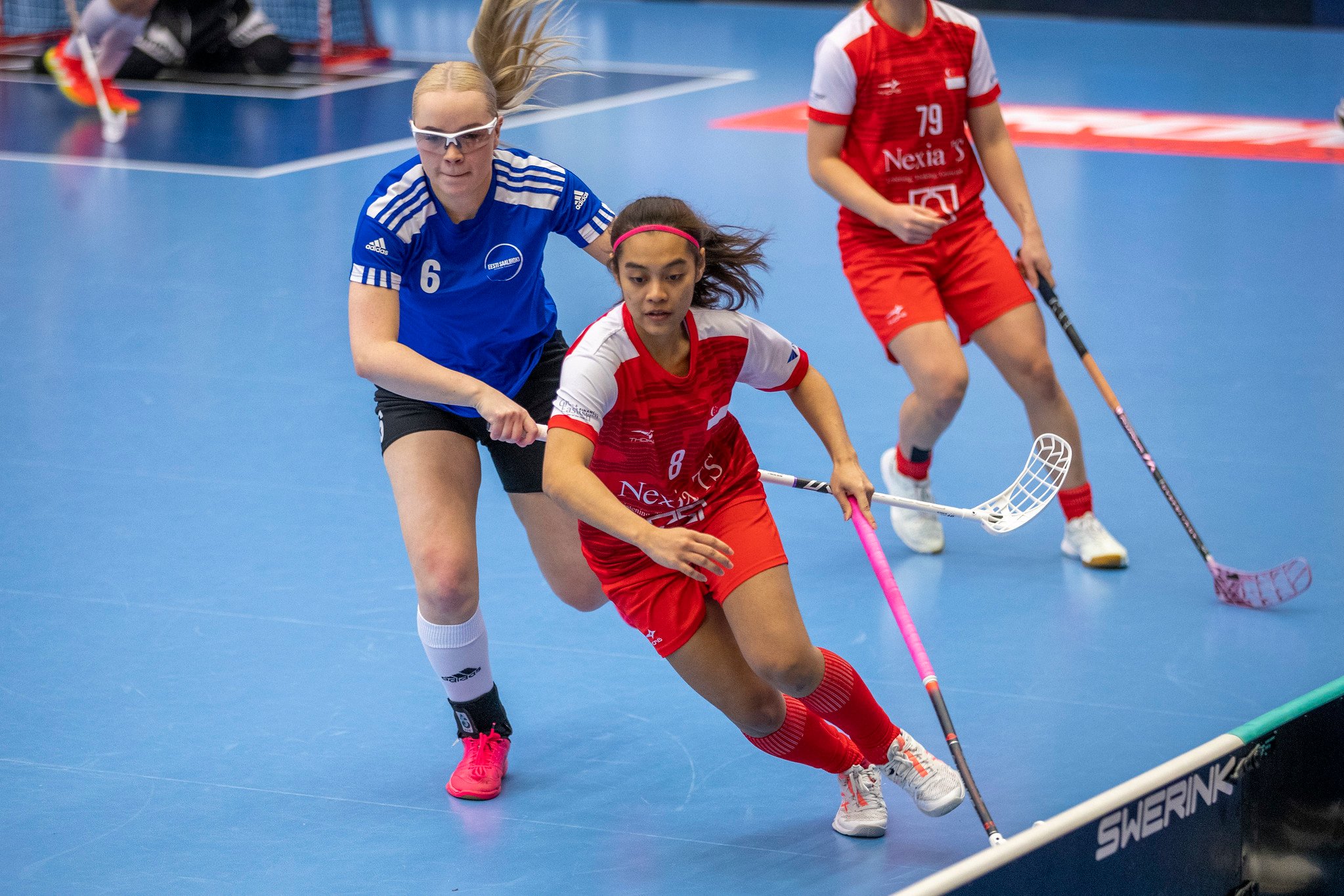 28th minute- Diana Klavan was sent to the penalty box again, but this time around for incorrect pushing. Estonia had learnt their lesson and delayed the advantage out for Singapore with a high-court pressure. That tactic prevented TeamSG from getting around the opponent’s defense strategy, as they couldn't replicate their earlier goal by the end of the power-play.

With fatigue setting in, both teams had many stumbles, literally, along the way. Fortunately, the physicality and injuries sustained were minor and expected in a contact sport like floorball. 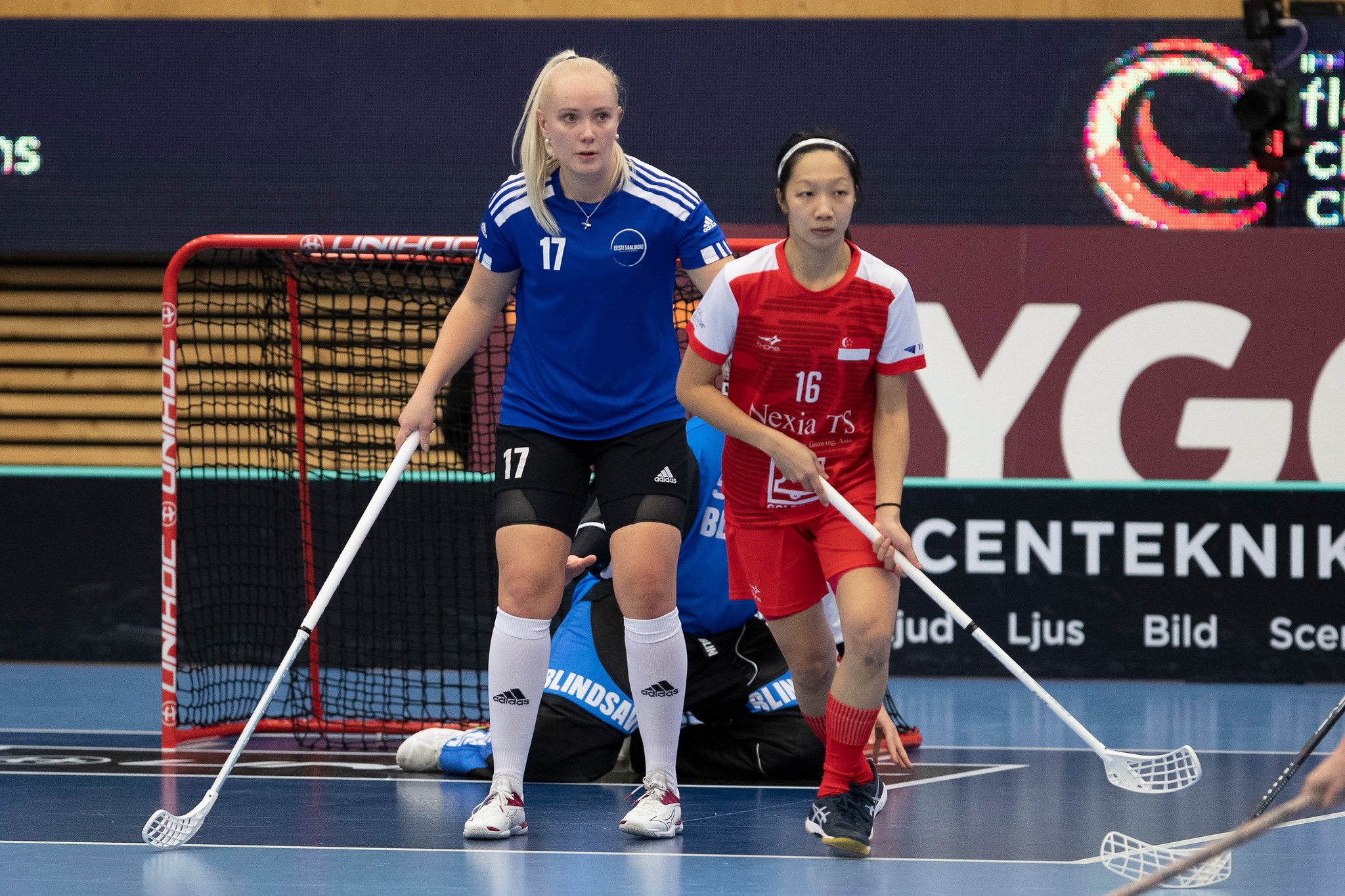 With less than 3 minutes in the 2nd period, another advantage was given to Singapore as Kädi Keinast (one of the goal scorers in the previous game) was sent to the sin bin for blocking of the opponent's stick. At this point, the Estonians were experts in box-play defence and were able to keep Singapore at bay. 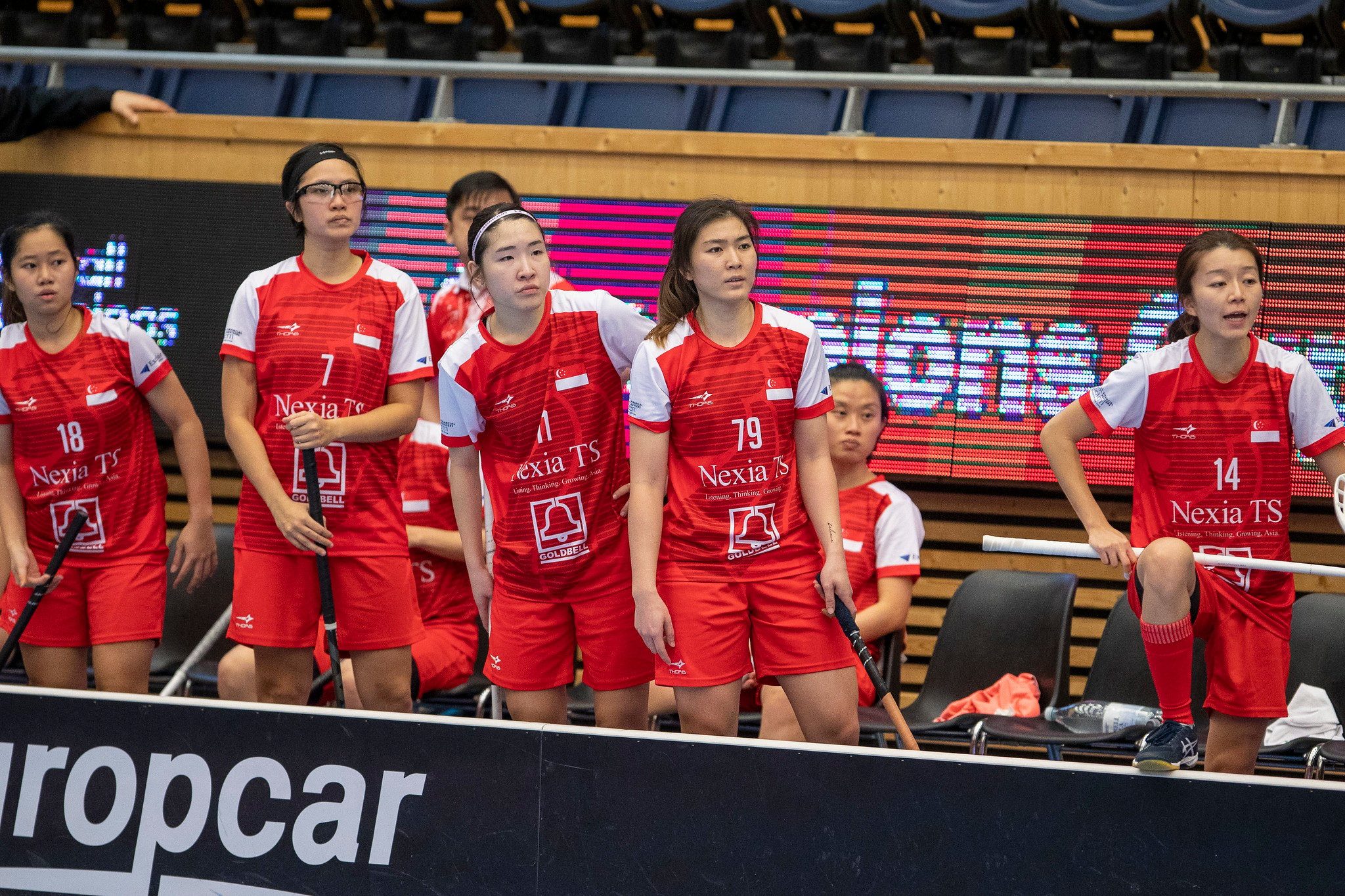 The 3rd  period started on a hopeful note for Singapore. Within the first minute, a miss-pass by Estonia’s Katrin Kivirand allowed Pearlynn Lim to have a one-on-one situation with the 19-year-old Estonian goalkeeper. The high spirits were soon dampened when Singapore’s Shannon Yeo was sent to the penalty box for blocking the opponent's stick. 30 seconds into the powerplay, Estonia’s Reti Väärt delivered a dangerous cross into the blindside for Nelli Alanko to slam it home from close range, her first for the Championships. It's 2-1 to Estonia. 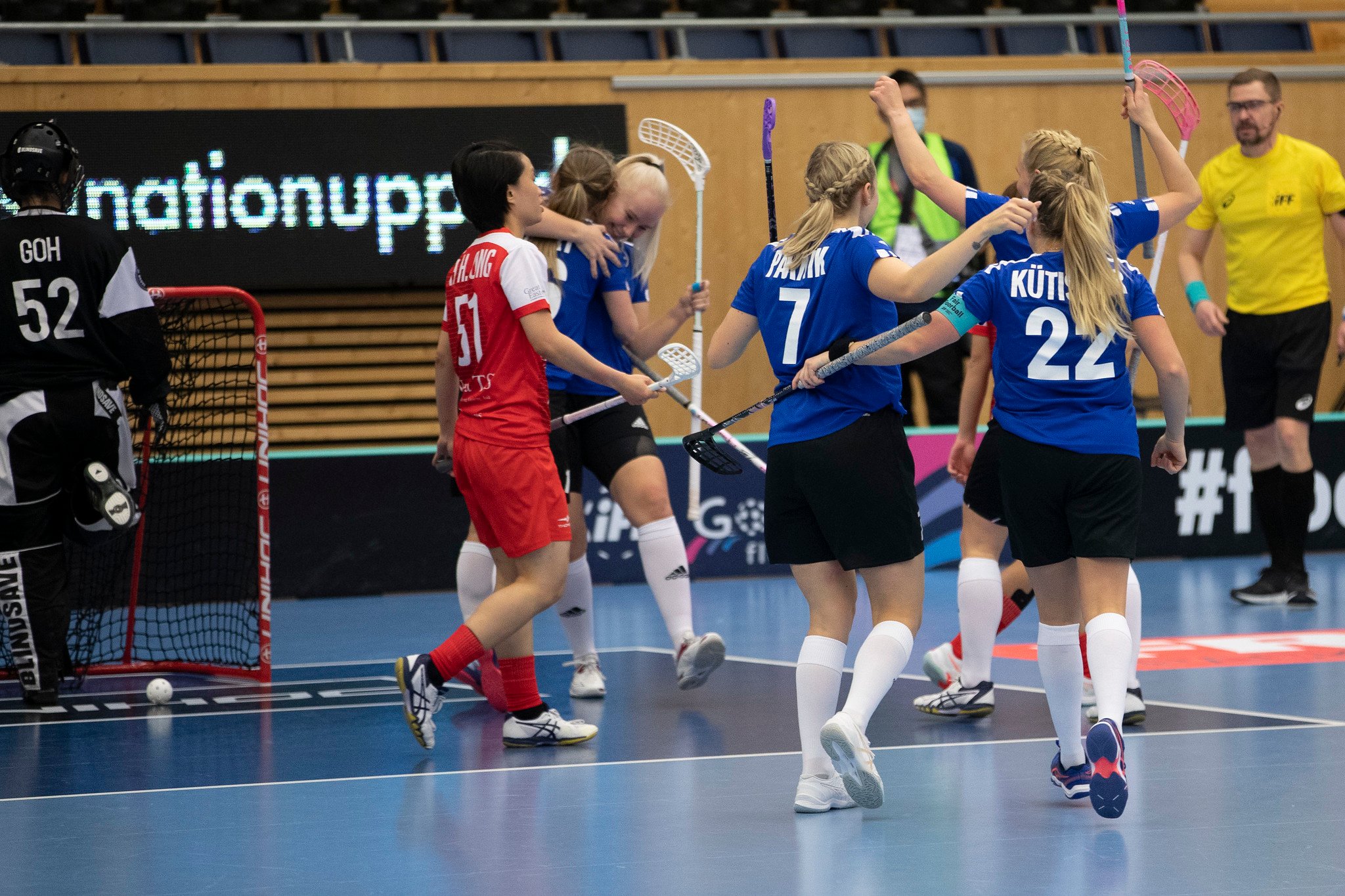 With 17 minutes still left in the match, Singapore pressed on Estonia’s defence with greater ball control and long-range shots. Unfortunately, the rebounds were just not going in. And another advantage was given to Estonia with 7 minutes left on the clock. Their endeavors at fast shots and rebounder goals were cleared away by the combined efforts of the Singaporean defenders and goalkeeper. 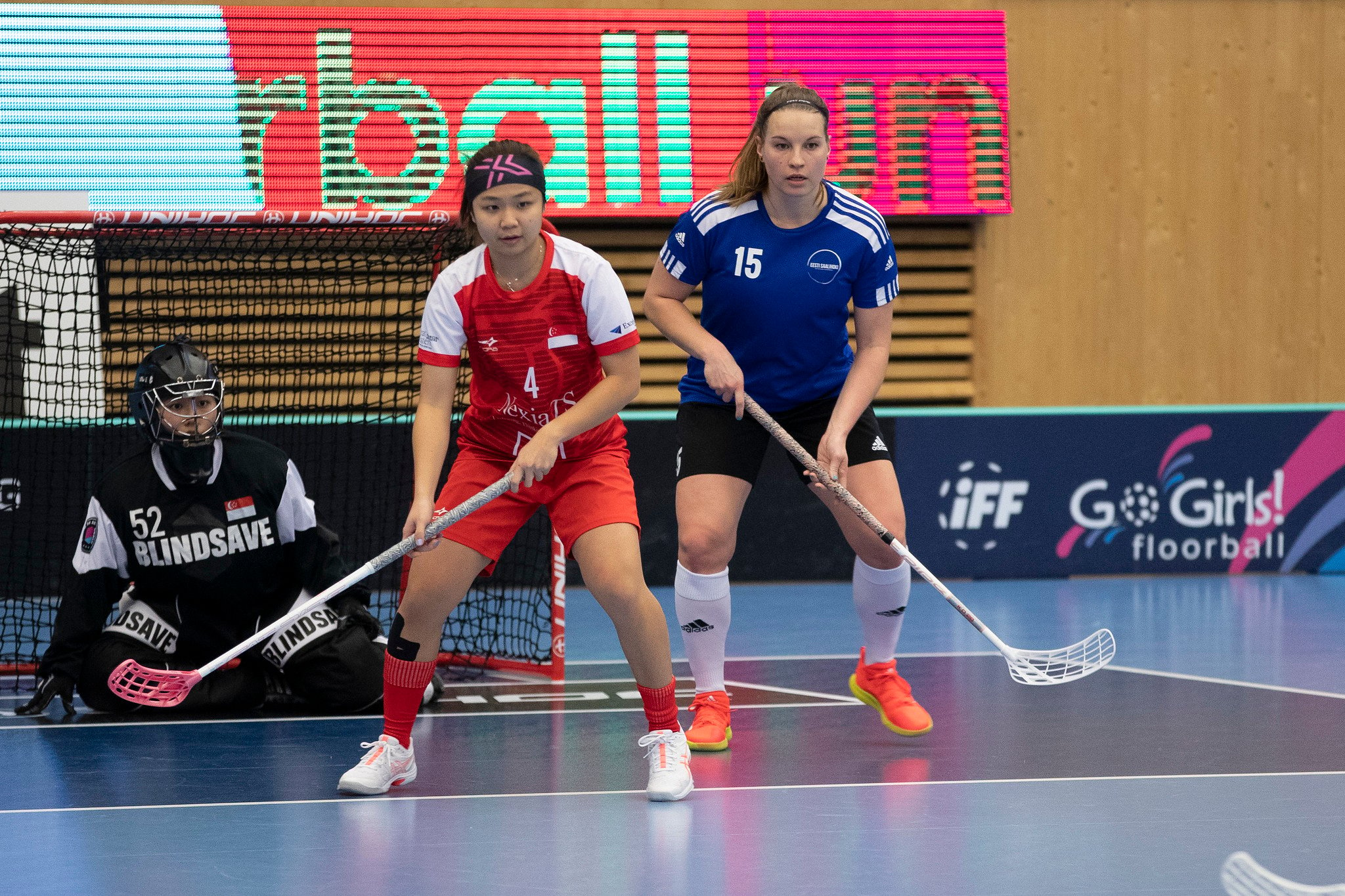 4 minutes to fulltime, Singapore played with an overload on attackers with hopes of a late goal, just like they had in several previous occasions. 90 seconds left and the Republic focused on controlling the play, while also looking for an opportune moment. That would not come as the final whistle soon blew signaling the end of the game. 2-1 for the final score.

After a long and arduous journey made further complicated by the Covid-19 pandemic, the Singapore Women’s team proudly ended with a 14th place finish at the World Floorball Championships. This was short of their target of either surpassing or equalling their 12th place achievement in 2019. But given the extreme lack of competition and training time overseas (22 months), TeamSG should feel proud of their overall accomplishments.

We now look ahead to 2023 when Singapore will play host to the Women's World Championships, for only the 2nd time in the Republic's history :)

Click on this ActiveSG Circle weblink to re-watch Team Singapore's 5 matches in Uppsala Sweden. We will also be live streaming the upcoming 2 semi-finals, 3rd place playoff and the Grand Final on the ActiveSG Circle :). All 4 matches will take place on Dec 4-5 respectively.

For previous Team Singapore match reports and results from the 2021 IFF Women's World Championships, do check out https://circle.myactivesg.com/