Thailand fends off strong challenge from TeamSG's Young Lions to triumph 3-1 in AFF U23 opener! 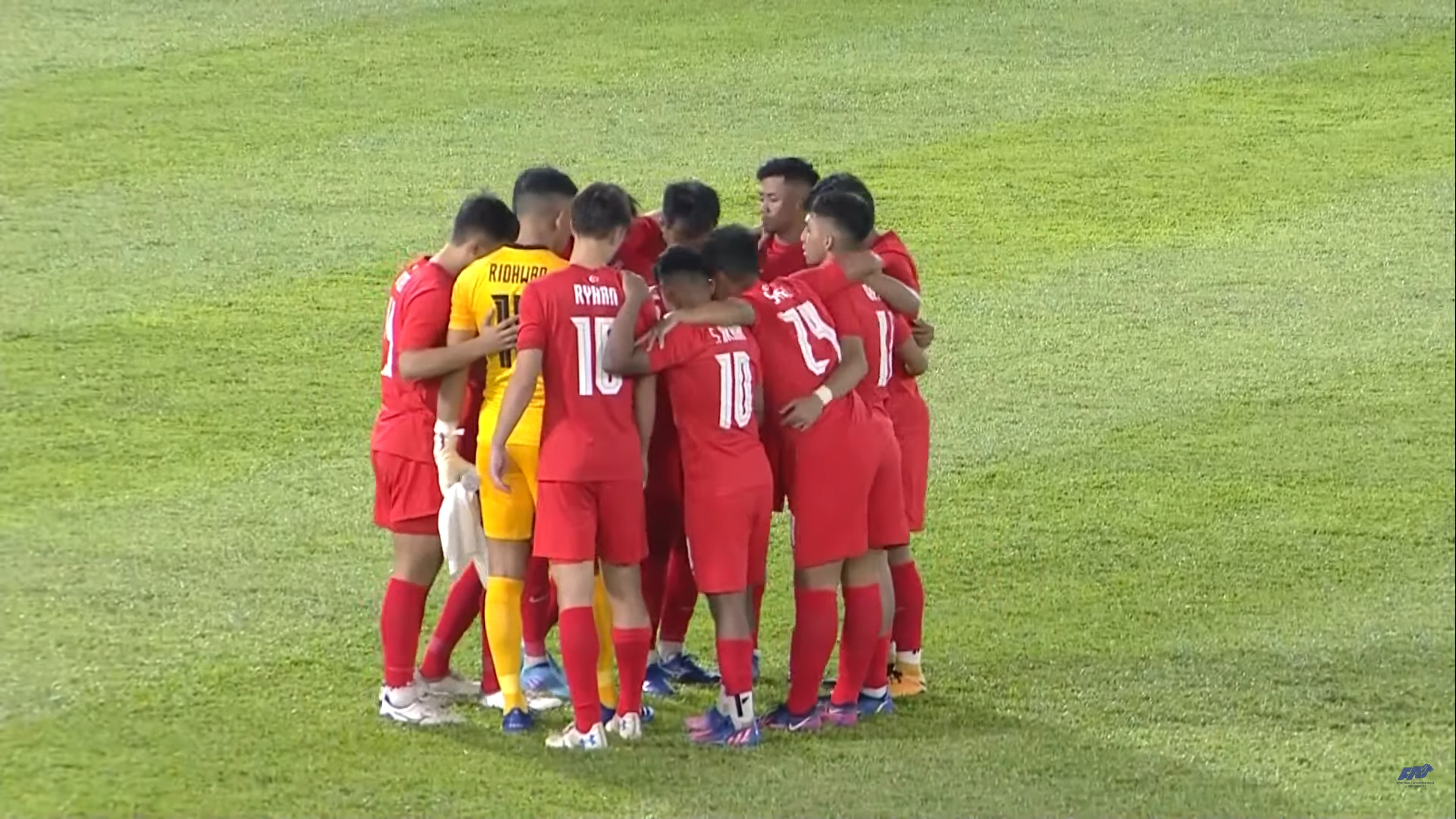 (Team Singapore before the start of the 2nd half. Image extracted from Live Stream)

Ravaged by selection issues due to Covid-19 and injuries, the odds were stacked against Singapore in their ASEAN Football Federation (AFF) Under-23 Championship 2022 Group C opener against Thailand on Wednesday night (February 16).

Nonetheless, coach Nazri Nasir’s charges fought admirably and led for large parts of the first half through Ilhan Fandi’s stunning header, struck the woodwork twice before going down to a 3-1 defeat at the Prince Stadium in Phnom Penh, Cambodia.

A clinical Teerasak Poeiphimai brace on either side of Niphitphon Wongpanya’s neat finish helped the much-more fancied Thais – one of the favourites to win the tournament – to come from behind to claim the 3 points and take the early initiative in Group C. 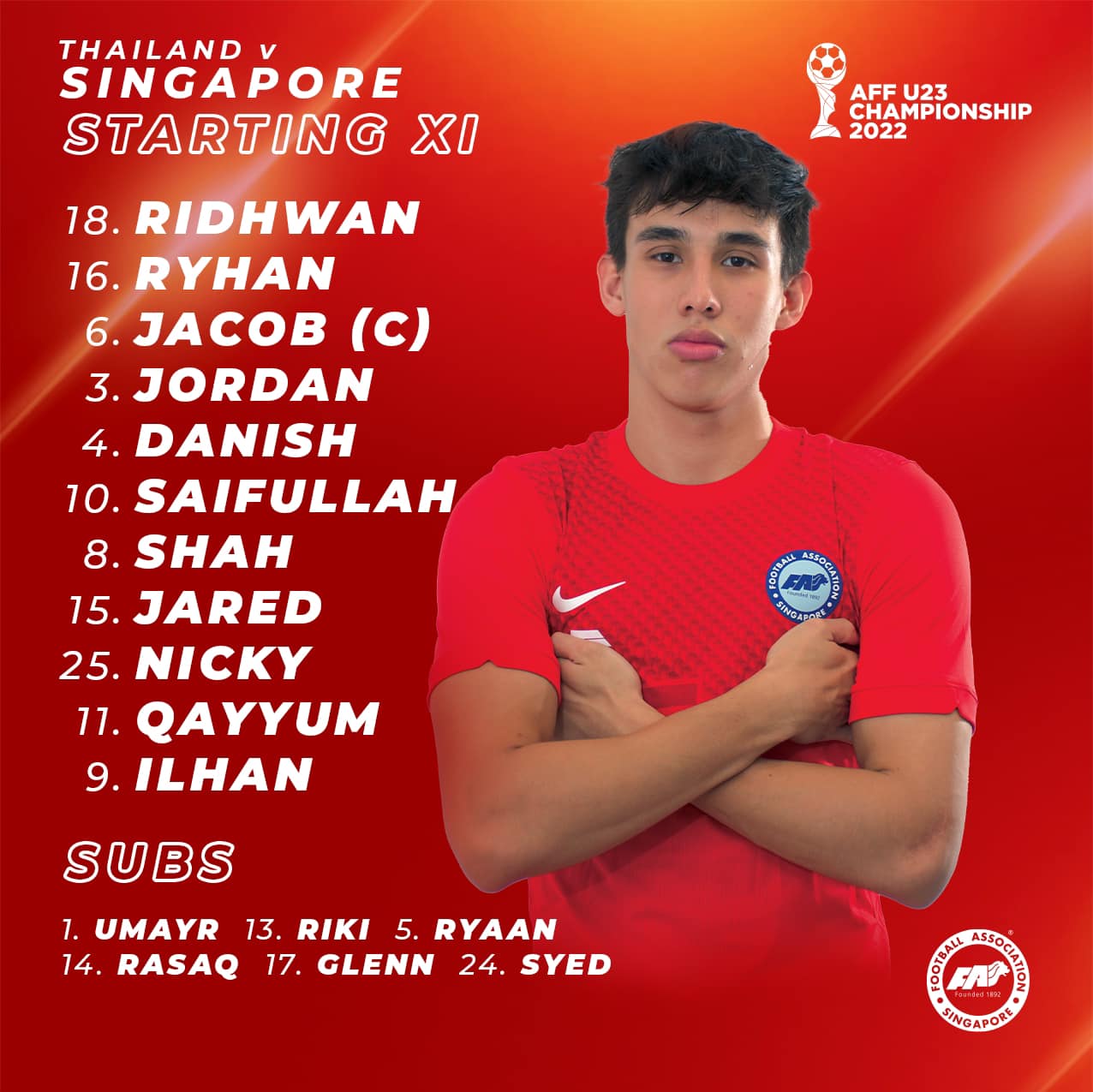 On the eve of the game, they were dealt a further blow with Raoul Suhaimi, Farhan Zulkifli and Zamani Zamri all ruled out due to returning positive polymerase chain reaction (PCR) test results since arriving. As such, Nazri could only name 6 players from a maximum of 12 – including only four outfielders – on the bench.

Fortunately for them, captain Jacob Mahler – an initial doubt as he was Farhan’s roommate – cleared a pre-match PCR test to lead the Young Lions. He was one of six players retained from the lineup that started in the last Under-23 international – a 5-1 Asian Football Confederation (AFC) U23 Asian Cup qualifying defeat to South Korea Republic last October.

The problems continued to mount for the Young Lions after kick-off, with left-back Danish Irfan having to be replaced by Ryaan Sanizal just seven minutes in due to injury. But that did not deter them from starting the game assertively as they took a surprise lead in the 16th minute. 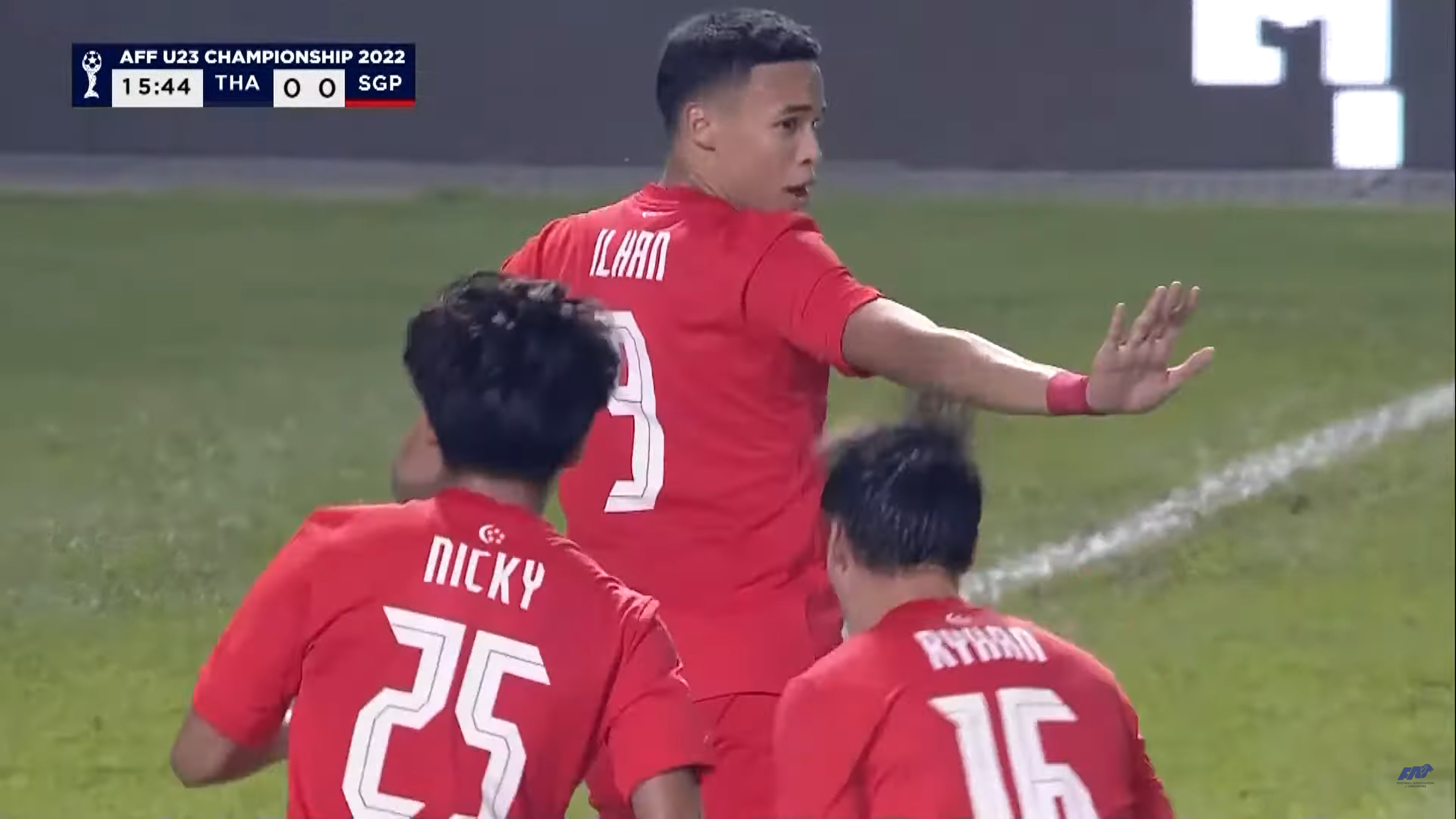 After Shah Shahiran’s free-kick was half-cleared by the Thai defence, Jared Gallagher – on his first start at U23 level – whipped in a tentalising cross for Ilhan to direct a majestic looping header that arched over the despairing reach of Narongsak Nuangwongsa.

Ilhan – third son of Singapore's legendary striker Fandi Ahmad – was unlucky not to make it two goals on 32 minutes as his brilliant curling effort from just outside the area came back off the crossbar, after he'd capitalised on a defensive slip-up by Thai captain Anusak Jaiphet.

The Thais were largely kept at bay until the dying stages of the first half, with Teerasak seeing his header off Kroekphon Arbram’s cross denied by a stunning point-blank save by Singapore goalkeeper Ridhwan Fikri on 43 minutes.

They were however, not to be denied two minutes later with the same two players combining, as Teerasak got just ahead of Jacob to convert Kroekphon’s cutback from eight metres out to restore parity. 1-1 at the break! 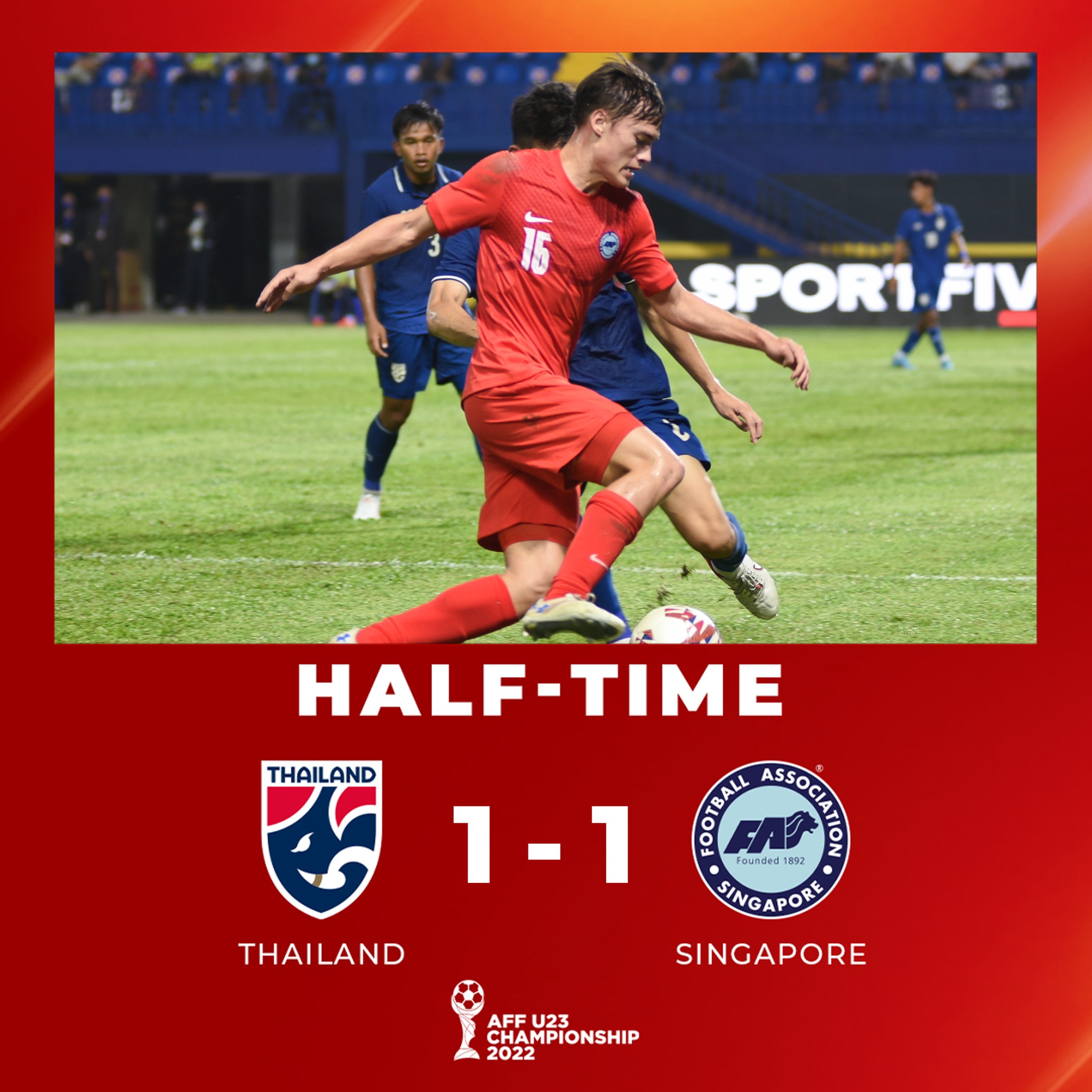 Coach Salvador Valero Garcia’s boys carried where they left off after the restart, with 2 quick-fire goals to pull 3-1 ahead. Niphitphon benefited from some good work down the right by Thanawat Saipetch to fire home a crisp low finish on 57 minutes. That's before the impressive Teerasak latched onto Anusak’s long ball to thump home emphatically for his second goal of the night five minutes later.

Singapore's main man Ilhan and strike partner Nicky Melvin Singh then had to come off midway through the second half through injuries in a further blow for the Young Lions. But they kept plugging away and could have easily stole a point late on if luck was on their side.

Danish Qayyum rocked the woodwork with a sumptuous long-range effort on 82 minutes. And 7 minutes later, another attempt by the Young Lion drew a great reflex save from Narongsak. Another TeamSG debutant Abdul Rasaq - also fired into the side netting after rounding the Thai keeper in between those passages of play. At the end of fulltime though, it was Thailand with the 3-1 win. 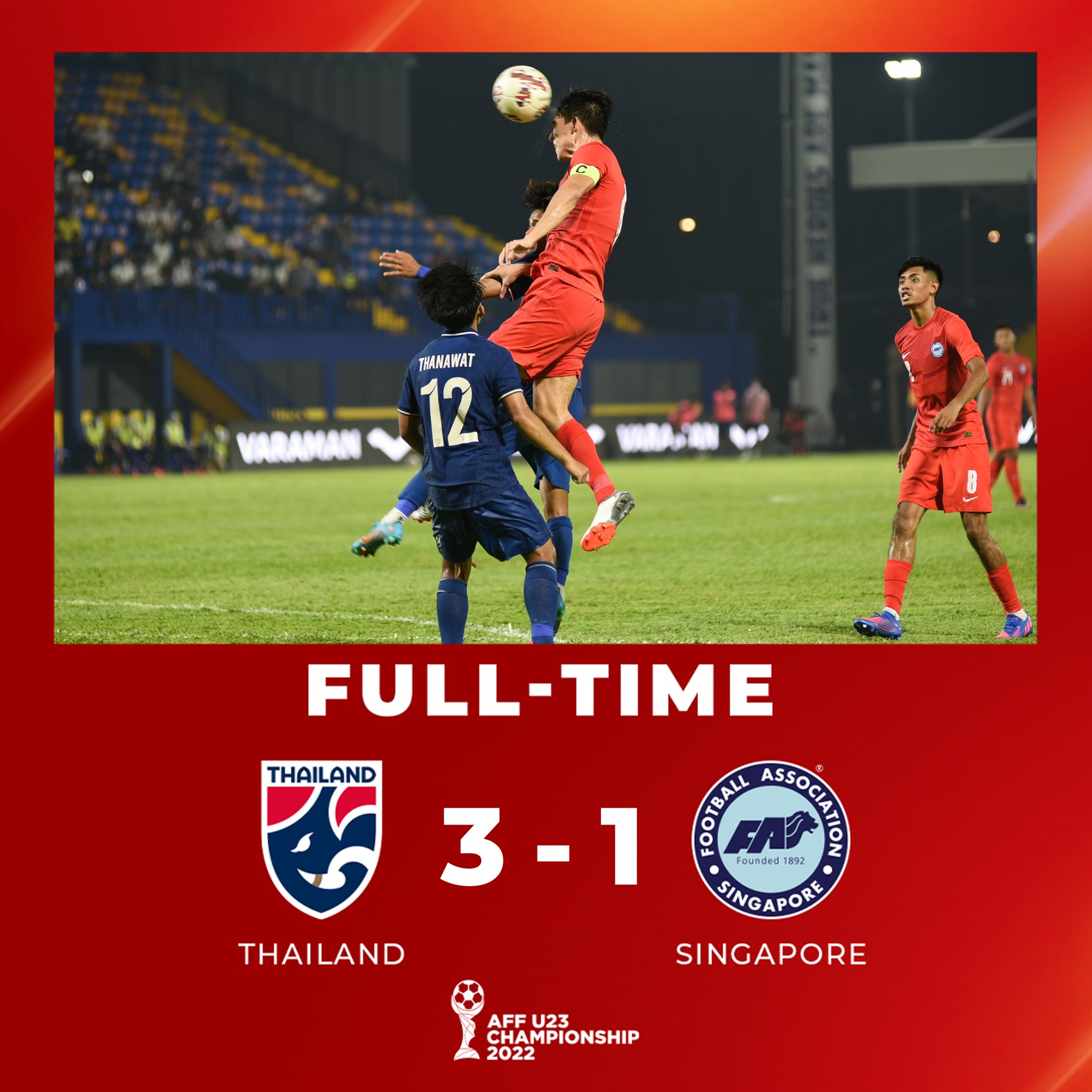 Our Singapore Under-23s will take heart from a battling display amidst testing circumstances as they look to bounce back against Vietnam in their second and final Group C match on Saturday night (February 19). Only the group winners and the overall best runner-up across the three groups will qualify for the semi-finals the following week.

This tournament serves as preparation for the upcoming May 12-23 Southeast Asian (SEA) Games in Hanoi, Vietnam.